Here's my Holiday Treat for y'all.....another installment of my Road Trip of 2013.
Y'all must have all been very good this year to deserve this.  ;-)

We left Sonya Ann's house on Friday morning around 10am.  At least that's when I recall being able to focus again after the previous night's adventures.  *snort*

On the way out of town, Hubs and I stopped at the local liquor store to check out what goodies we could find that we can't find around home, as far as "adult beverages" go.

I was browsing over by the regional wines when I heard a loud voice say, "Will ya look at all these alcoholics in the liquor store first thing in the morning!??, or something to that effect.
I spun around and it was Sonya Ann!

Evidently I had forgotten to pack the present she gave me when we were loading the car up so she jumped in the car to try to catch us before we left town.....she knew we were making this stop before hitting the road to southern IL.
At least that's what Sonya said. ;-)
I think SA just couldn't bear the thought of me leaving and was getting all stalker-ish on us.

Anyway, we hugged again and she was gone in a flash and I was holding a basket of homemade beauty products she had made just for little ol' me. 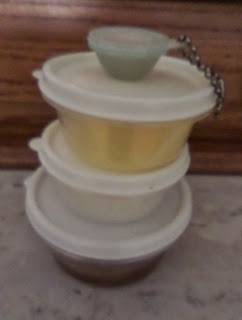 I lost the basket she presented these to me in somewhere before I got home......no, rather I gave it away to a hotel maid who had admired it and we had NO room in the trunk for anything at that point, so I gave it to the maid along with her tip.  It made her day. 8-)

Anyway, back to my presents--Sonya Ann made this stuff.......

From bottom to top, there is a wet body scrub(smells like vanilla), a dry white scrub(for my face?  Hope so cuz that's where it went. lol), a lotion with some kind of butter(coconut or shea or ?), and the top is a tiny container of lip stuff.

Yes, I am such a "girlie girl" indeed that I probably got this wrong and don't know what to call some of it.
But I DO know that the yellow tub of stuff had some kind of organic/natural oil or butter in it because when it got left in a car trunk when we got to the South in AUGUST, it turned to organic/natural oil DRINK.  8-)
Yes, I am very bright that way...... 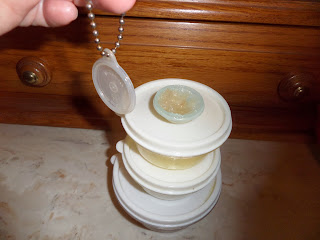 And I love this little pot/container she put handmade chap stick in!  It's on a chain that you can put on your key ring or hook to something else so you don't LOSE IT.
Ask me how I know that.

Now back to the narrative......
After an HOUR! lol in the liquor store, we paid and proceeded to cram all our liquid goodies into the trunk of the rental car and then we were outta there!
Hey, I was buying Christmas gifts among all that booze so don't judge me.  ;-)

We had a couple of hours drive through mostly tiny towns on back roads until we hit Rockford. 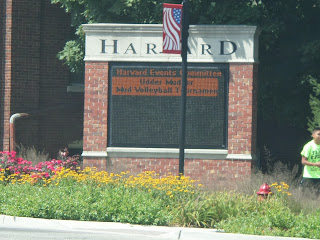 The flag obscured the "V" and part of the "A" in the sign for the town of HARVARD. 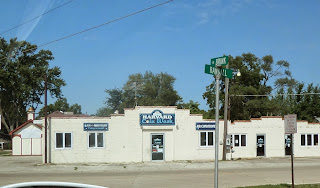 Embiggen this photo to see the road sign.
Now I can tell people that yes, I went to Harvard.  ;-)

Then we stopped for gas before we left that town and I snapped this photo of the convenience store window.  We are DEFINITELY not out East anymore.......look at what they call soda here....... 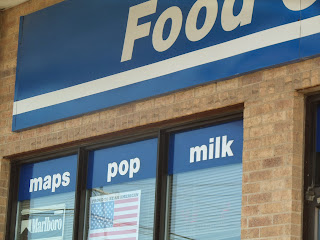 And then we drove and drove and drove down through the middle of Illinois basically.  So flat and being August, the scenery didn't change much.   Lot of shots of fields of corn(plus a few more crops)out my window, until we were about an hour away from our stop for the day.
Then the view changed a bit....... 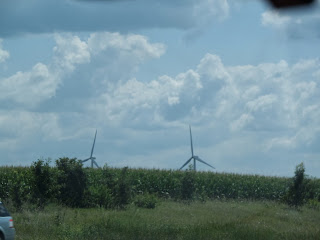 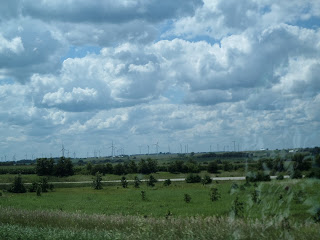 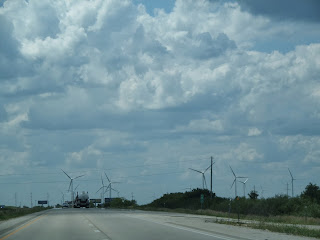 Crops of giant windmills amidst the corn!  I guess it makes sense though if you have a flat topographical area and strong winds come whipping through at various times of the year, you try to harness that energy by building windmill farms. 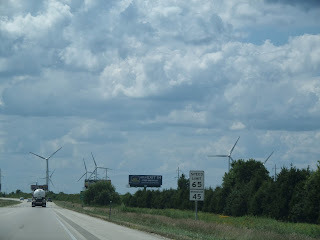 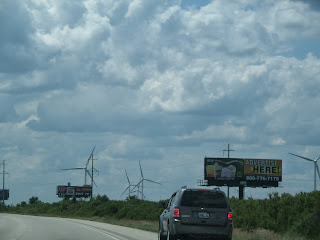 It was just freaky for me to see this multitude of mills.  The only other mills I've ever seen at home are ones up on a mountain ridge, viewed from a distance.  I've never seen any so close to the highway.  You'd come around a bend and Bingo!.....there would be a windmill right near the road and it would seem as if you were going to drive right up to it's base on a few of them.
Just a bit freaky to me. 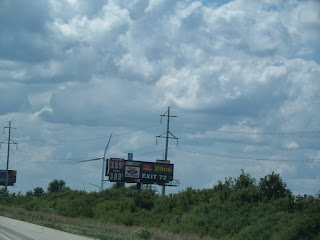 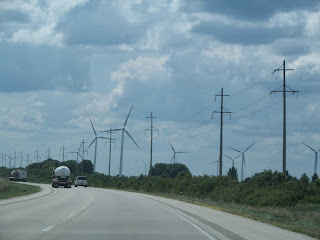 Sometime after 1pm, we made it to our first destination of the day, a small town in central Illinois called Mendota.
Another water tower for my collection....... 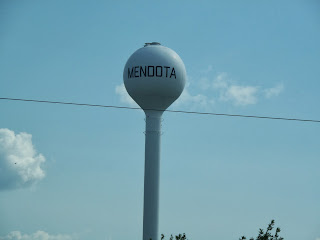 The meeting place was a local restaurant.
And I snapped this photo as 2 friends walked into my trap, er......the building...... 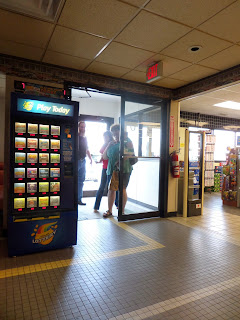 We were here in Mendota, IL to meet two online friends, whom I have known since we were all members of an online Beanie Babies/Attic Treasures group.

Here's my short video while we dined on the restaurant's Friday Special, FISH SANDWICHES.


I have a fish sandwich phobia ever since about 2005 and a fateful lunch while on the way to take the kids to Summer camp.

I can't remember what type of white fish these were, do you recall Robin & Pam?, but they were most excellent!  This lunch special was such a deal too, it even came with a bowl of clam chowder.
And we all ordered it.
Update....Robin informed me that it was Walleye.  Hey, somebody actual READS this stuff! lol

And yes, I actually took pictures of everyone's plate for posterity.  ;-) 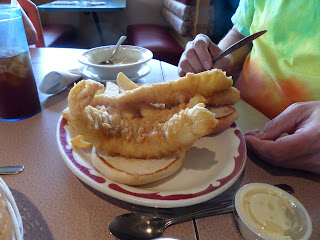 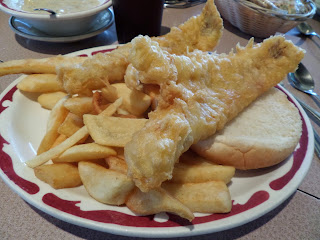 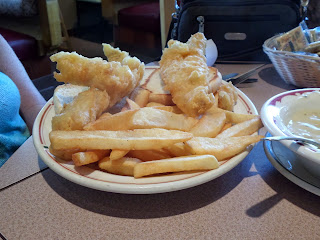 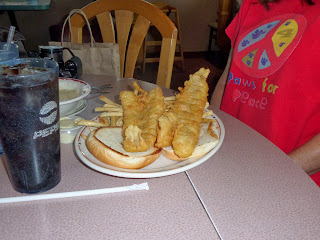 It was a real nice visit.  We just sort of started talking and didn't stop, like we were old friends....which is what we were/are.....only online.

It was so nice to meet them both and just the tonic I needed before heading to the Hubs sister's town to go to a wedding  & reception where I knew exactly 2 people and I was married to one of those. ;-)

Robin, who is always doing nice things for people, had presents for me.
I "heart" presents.
Hey!, who doesn't like presents, right? 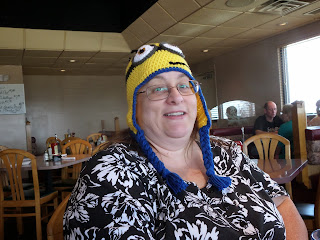 A very cool crocheted hat.
Yes, I am now the proud owner of my very own MINION HAT!
And don't even THINK, now that the weather is cold, I don't wear this out in public.
Yes, I am a 54 year old women......what of it?
So eat your heart out you don't have one Holly Arcure. 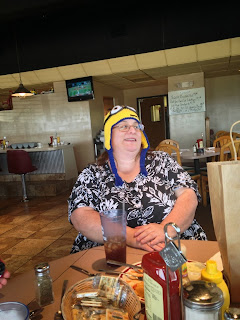 It even matched my dress.
I am such an attention 'ho too evidently....... 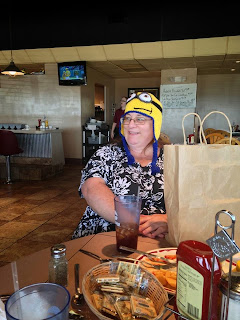 Robin makes and sells these hats.
I don't even think she uses a pattern.  She thinks of something or sees a picture and comes up with designs in her head and just starts making them.
She posted lots of different ones on Facebook last year.....Angry Birds, Nightmare Before Christmas, Sports Team colors and I can't remember any others right now, but she's done lots of different ones.

If anyone needs a hat, drop me a line and I'll direct you to the Hat Master herself, Robin. 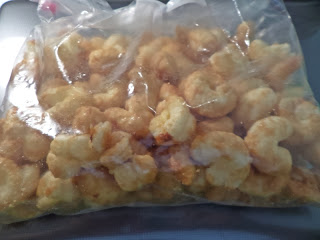 It's something she called "Puffcorn".  Ok, so I am NOT from a corn producing state so had NO CLUE what this was.  Now I can tell you it's a popcorn that has had the hulls removed.  It just about melts in your mouth and barely resembles popcorn to me.  You can buy it plain or butter flavored or even with a caramel coating.
But Robin makes her own caramel variety from the plain stuff, and she presented me with a bag of puffcorn she made.

I resisted trying it until we got home to PA from our adventures.
And it's a good thing I did.
Because if I had tried it while still in the Midwest(since I couldn't find anywhere to buy this near home and no one here has even heard about it!)I might have thrown out all the adult beverages we had collected in the car's trunk so far into our trip and refilled the trunk with bags of this stuff(the plain variety)so I could have made my own.

Let's just say that once I opened this bag and tried it, it wasn't very long before it was empty.
Really, it was THAT good.
You may have heard me whimpering a little in PA from wherever you are when I finished that Puff Crack back in August.
And I didn't even share it with anyone.......bad, bad Sluggy.......

We posed for a quick photo before goodbye hugs were exchanged and Hubs and I hit the road again.
Thanks for the fun lunch Pam and Robin!  It was great to finally meet the both of you. 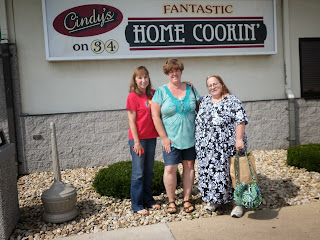 Then it was back onto the Highway.....

Sometimes you just know you are in farm country. lol 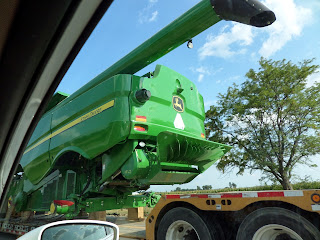 At least no old spinster woman on a bicycle passed my window..... 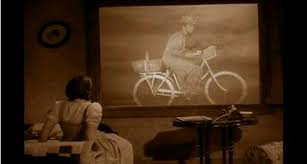 A rest stop break to use the facilities and check the big map in the lobby and a gratuitous posed shot of Hubs with said map...... 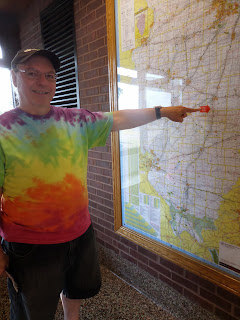 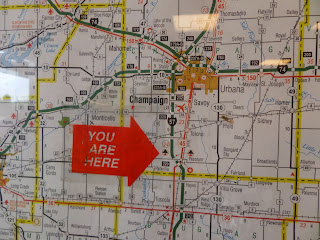 Then back on the road.
We passed this town near our destination.
Geez, I live near a large Amish community in PA and here they are in IL.....are the Amish stalking me? 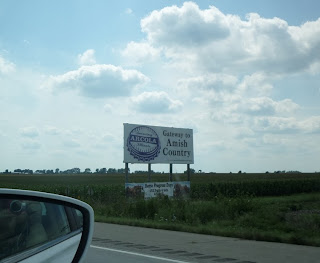 Soon after this we pulled into the Sister in-law's town and checked into the hotel.
After freshening up, we met Hub's sister and her fiancée for dinner at a local steak place.
Hub's sister is the one without the beard....... 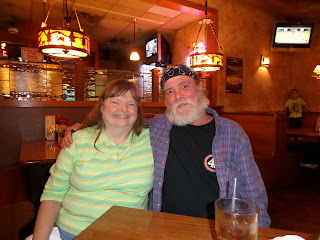 And I didn't take kindly to not being able to wear the big Foam Ten Gallon Hat(you only get it if it's your birthday and Hubs wouldn't let me lie about that), so I posed under it before we left the building.....I'm on my tippy toes but still not quite tall enough there, am I? 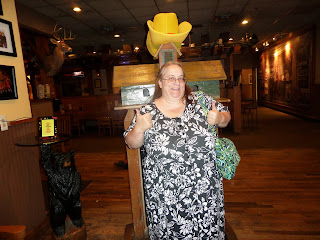 I bet you never would have guessed that I am silly this way?
If I can wear a Minion hat, I certainly can pretend to wear a big foam cowboy hat.

And after dinner we went back to our room and conked out because there were big plans for the following day.
Thus ends Day 4 of the Great Summer Road Trip of 2013.