Well, Monday morning didn't start out very well.
As some of you may have seen on the post I put up, at the time, Hubs had the minivan up to the Firestone at the crack of dawn, before I was up.
I looked out the window and it was snowing at a fairly good clip..... 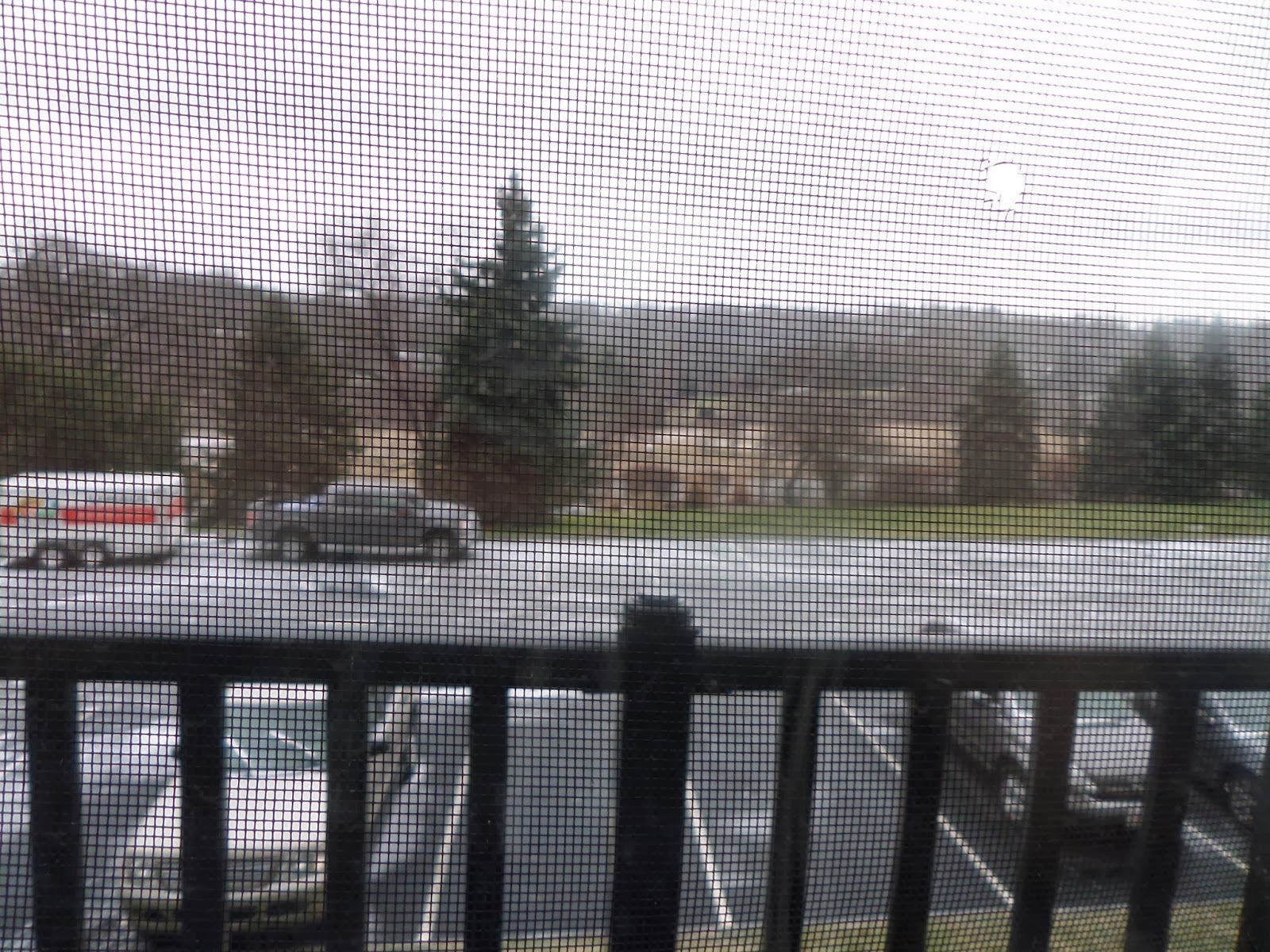 Love the hole in the window screen....good thing it wasn't Summer.

Hubs had said that he was going to stay at Firestone until they got it fixed or call me if they couldn't do the work it needed done that day.
So I was possibly in for sitting in the motel all day long as I had no transportation now.
Luckily the motel had a sort of restaurant so I could eat if I was indeed stranded for the day.

But about 10pm, Hubs showed up at the room with #1 Son in tow.
The guys at Firestone said they could do the work that day, so Hubs called our son and had him pick Hubs up and bring him back to the motel.
So #1 Son was going to be our driver for the day in his own car.
Since the weather was so shitty we couldn't do the Duquesne Incline like I had wanted to so we were at a loss for cheap sightseeing activities(as some of the indoor ones were closed because it was Monday).  But we made do.
#1 Son took us firstly, to his favorite Giant Eagle grocery that sold beer.  It was quite the long ride from his apartment.  I bought a bottle of Sam Adams Gingerbread and Southern Tier Choklat Stouts, as well as a large bottle of Cherry Lambic..... 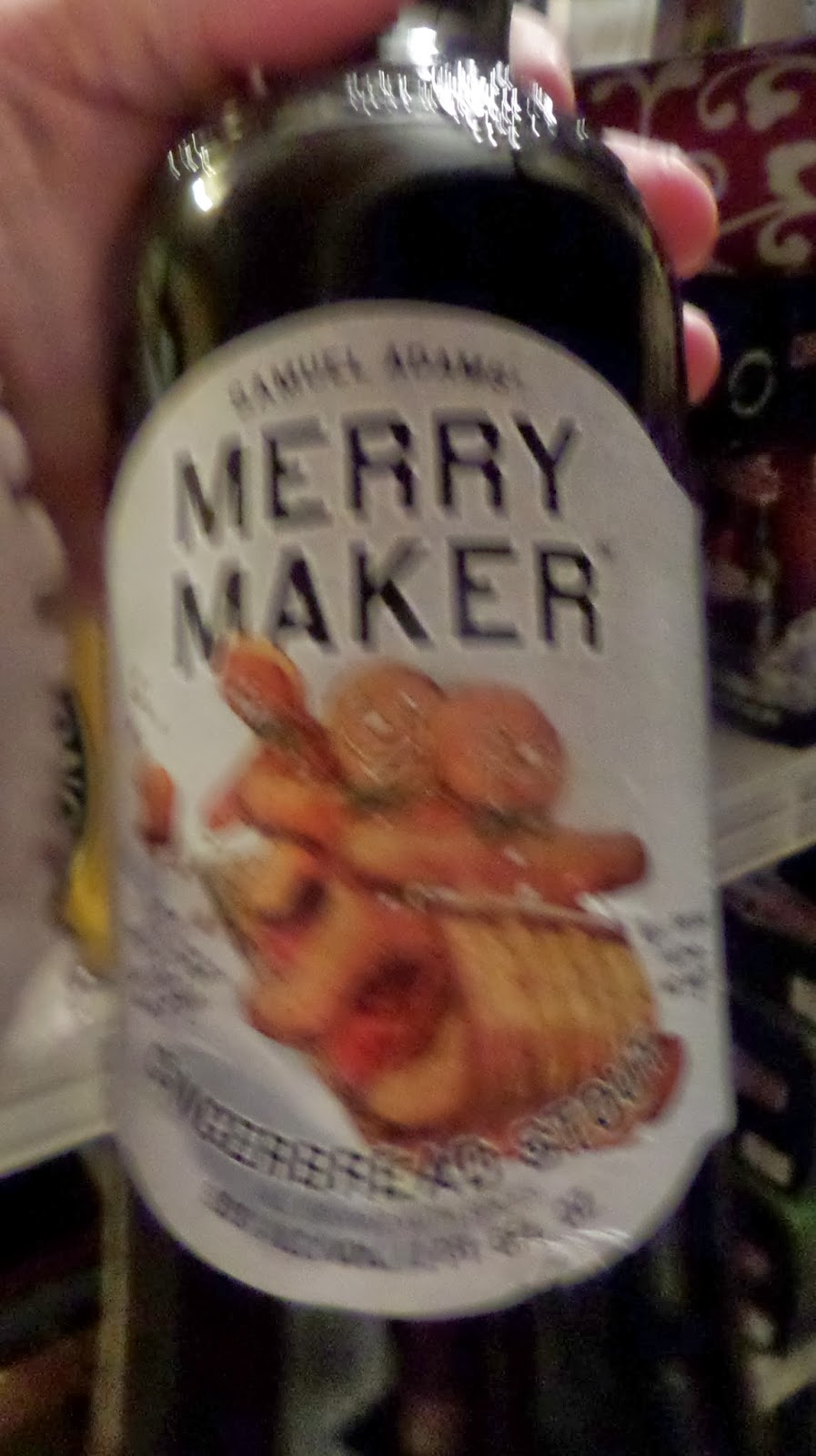 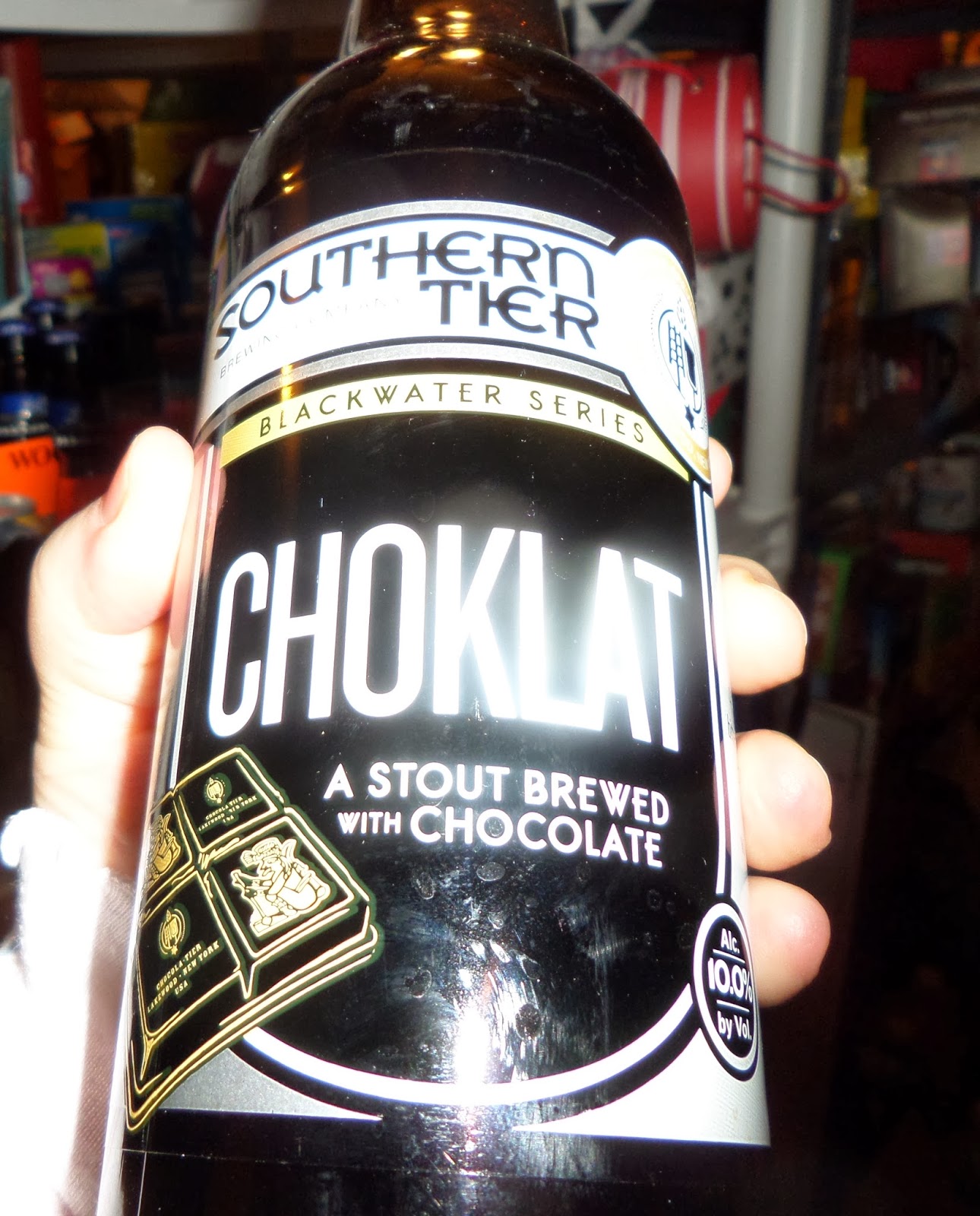 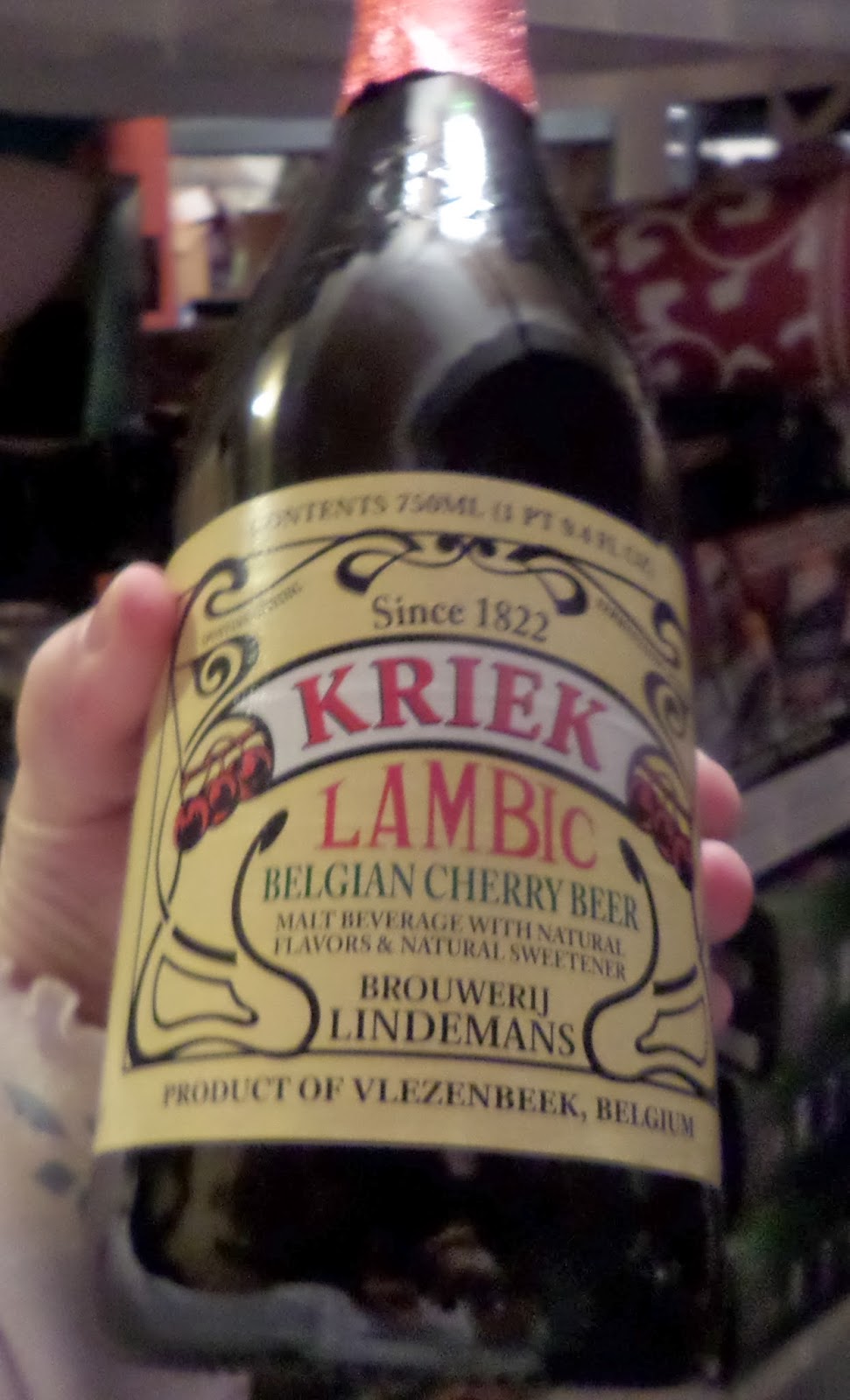 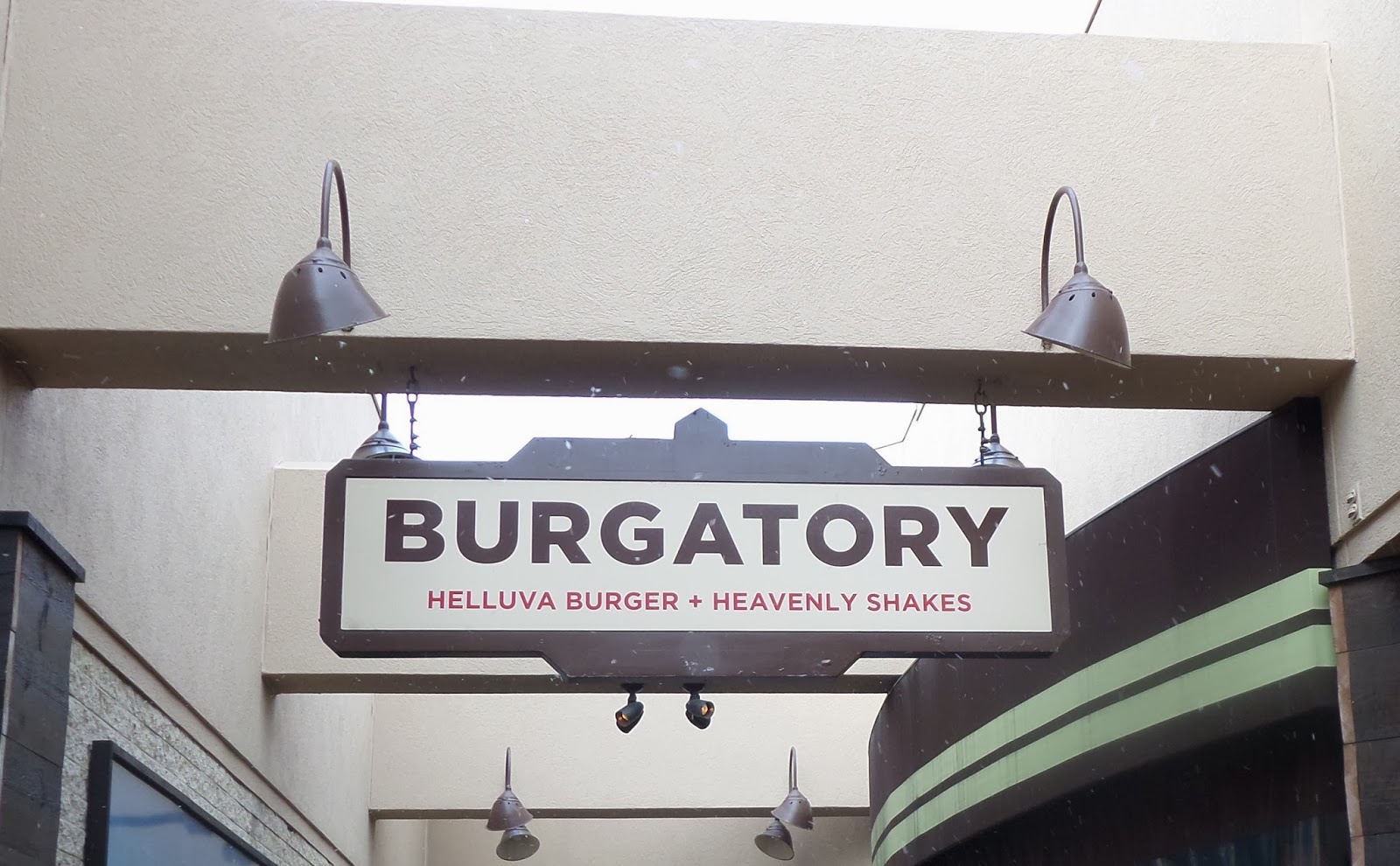 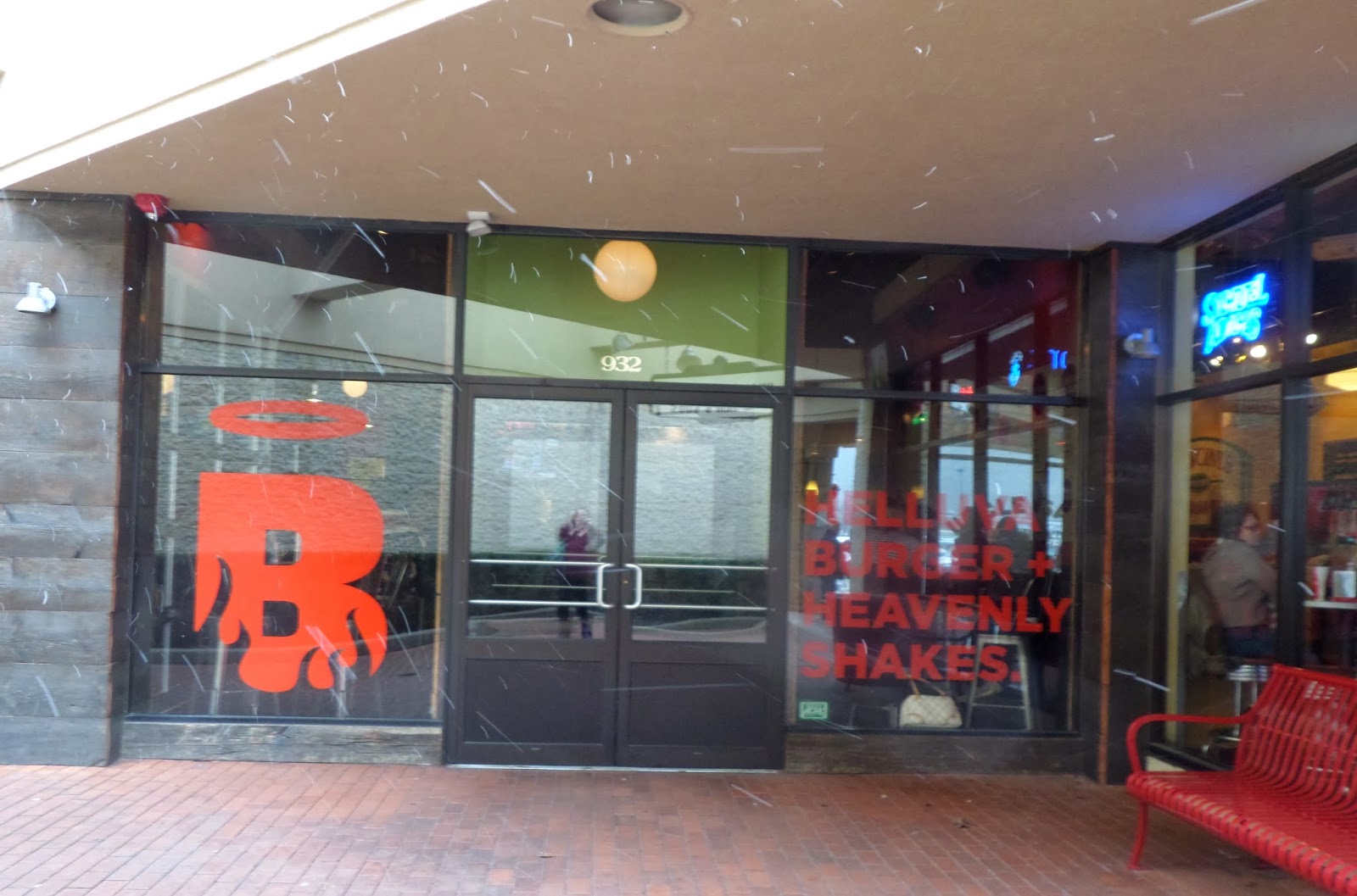 Unfortunately, everyone on this side of Pittsburgh ALSO decided to have lunch here that day, so not wanting to wait an hour for a table, we ended up eating next door at Sam's Sandwich Shoppe...... 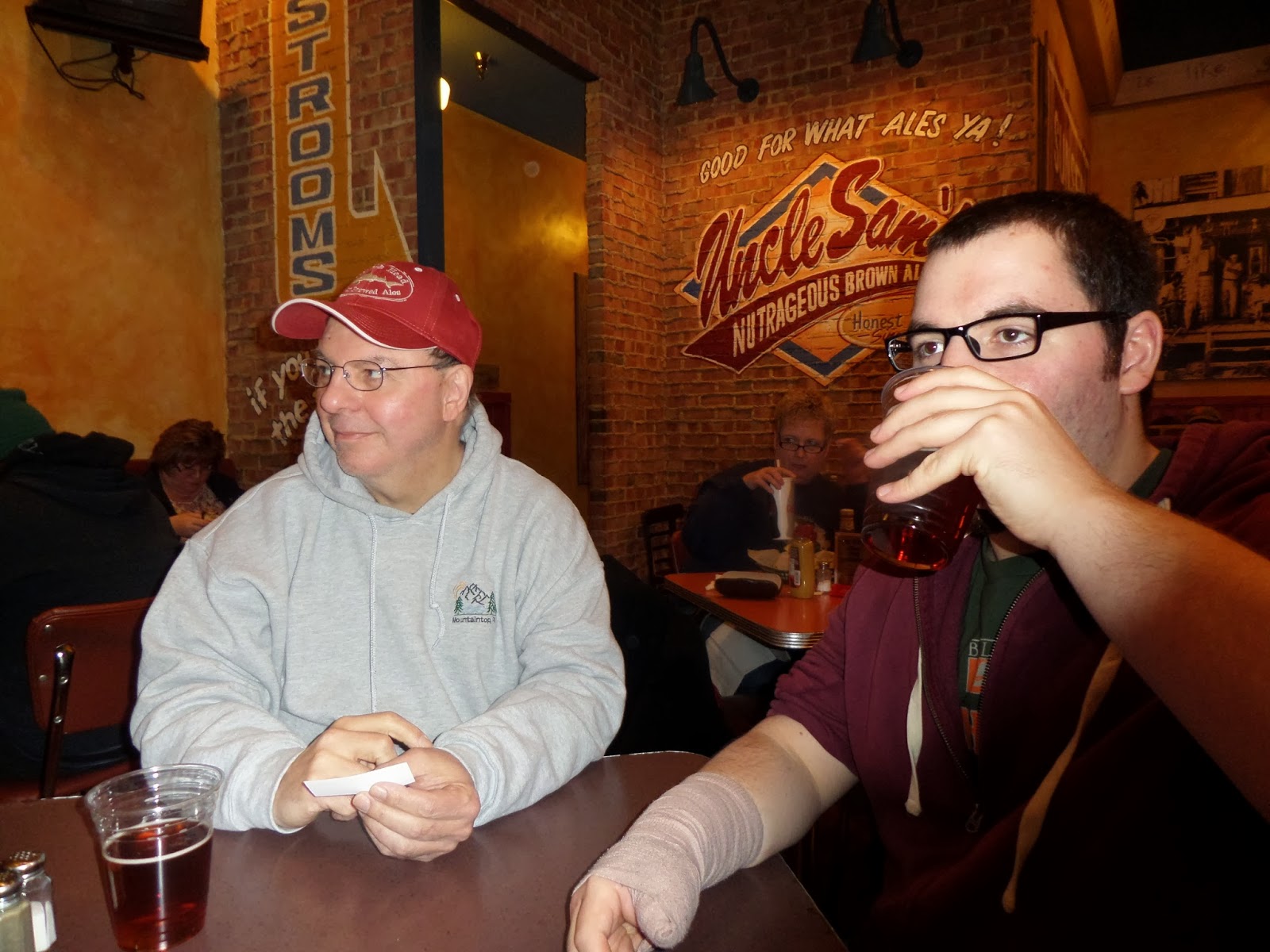 Then we went shopping since we were in a shopping center.  I hit 5 Below and Bath and Body Works but bought nothing.
Eh, nothing I wanted/needed.
Hubs and son hit the liquor store.  I don't recall if they actually bought anything there or not.

Afterwards we tried Burgatory again, since #1 Son really wanted me to try one of their milkshakes.
What the heck, why not? 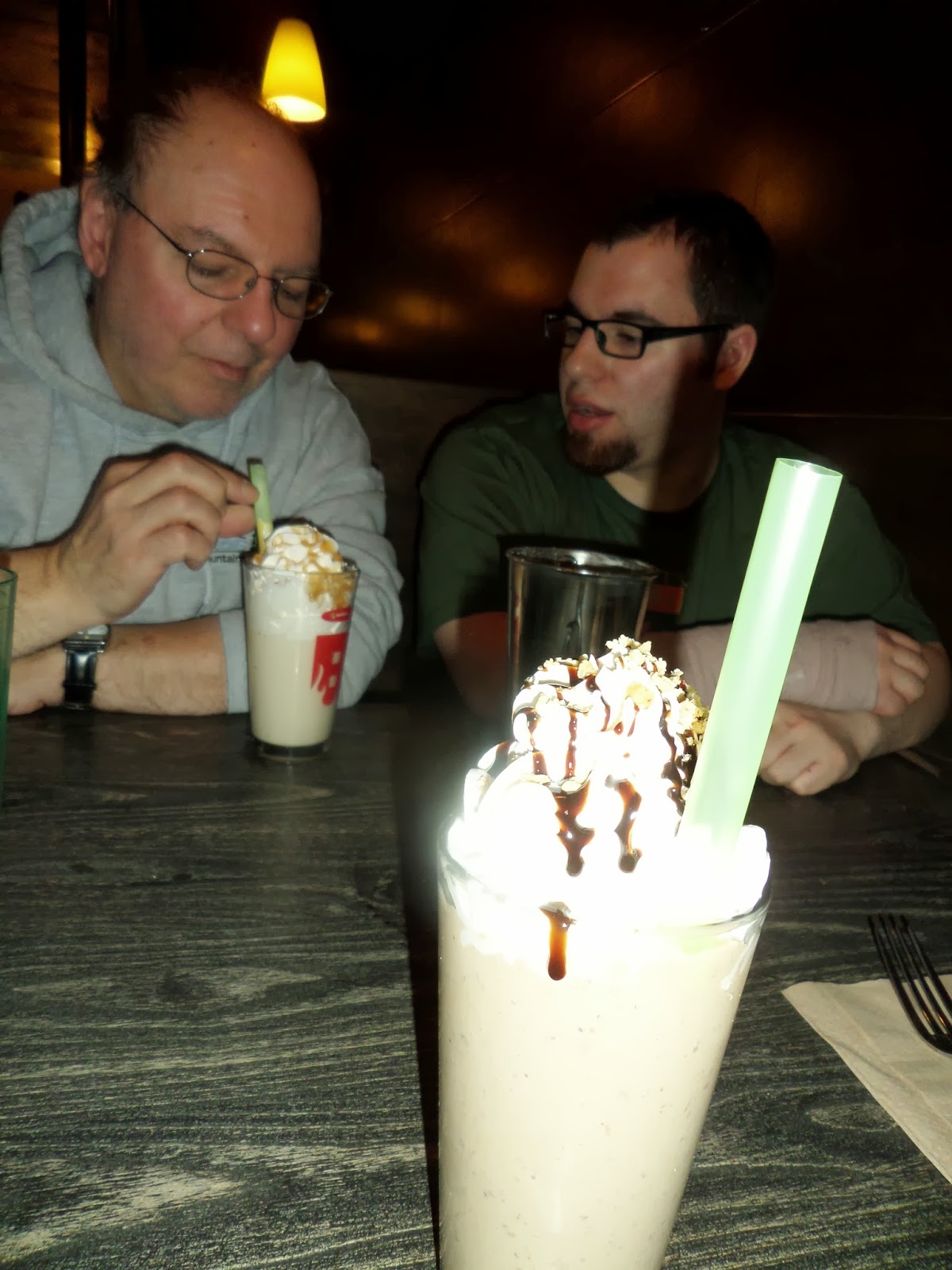 Here's Hubs trying #1 Son's shake.  It has bourbon in it.
Mine is in the foreground.  It's a Choco Taco Shake(crushed waffle cone, peanuts and chocolate)and has vodka in it.

Ok, so I drink folks, if you didn't know that already.
But I am NOT a vodka drinker. 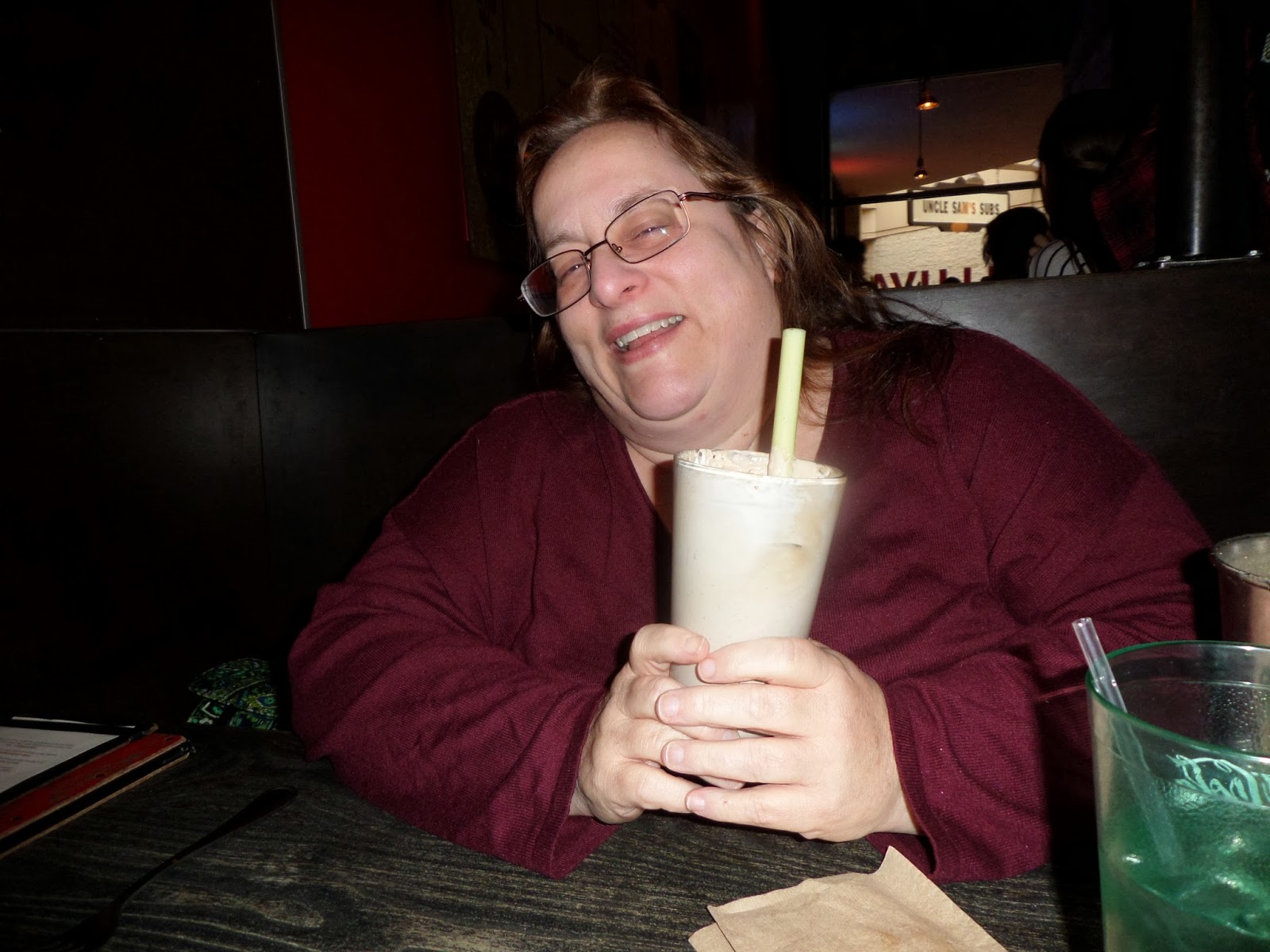 I swear, every time I took a sip, another one magically appeared in my glass! 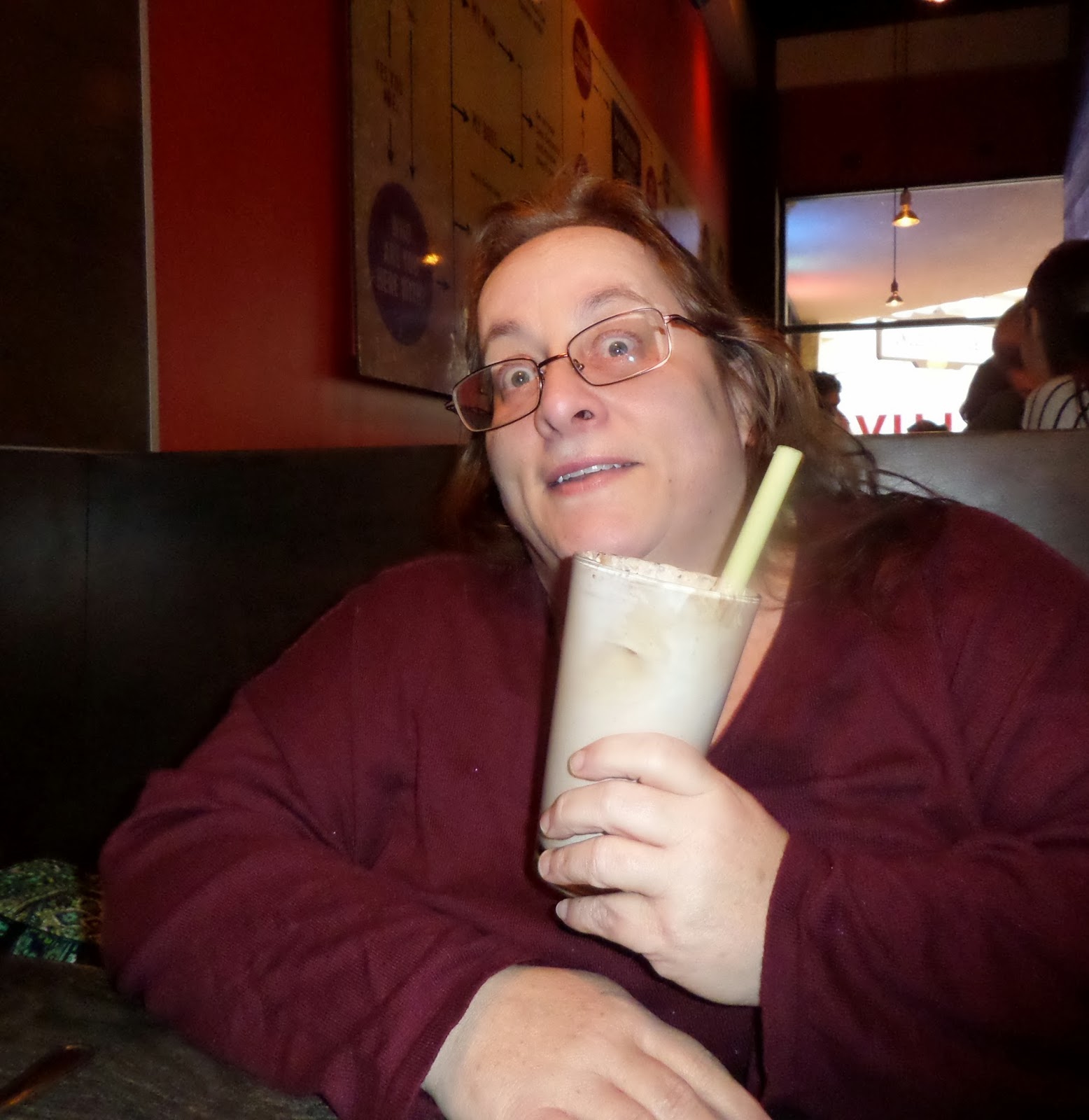 About 5 minutes into drinking this thing, the vodka slammed into my brain.  I think the photo above illustrates that event..... 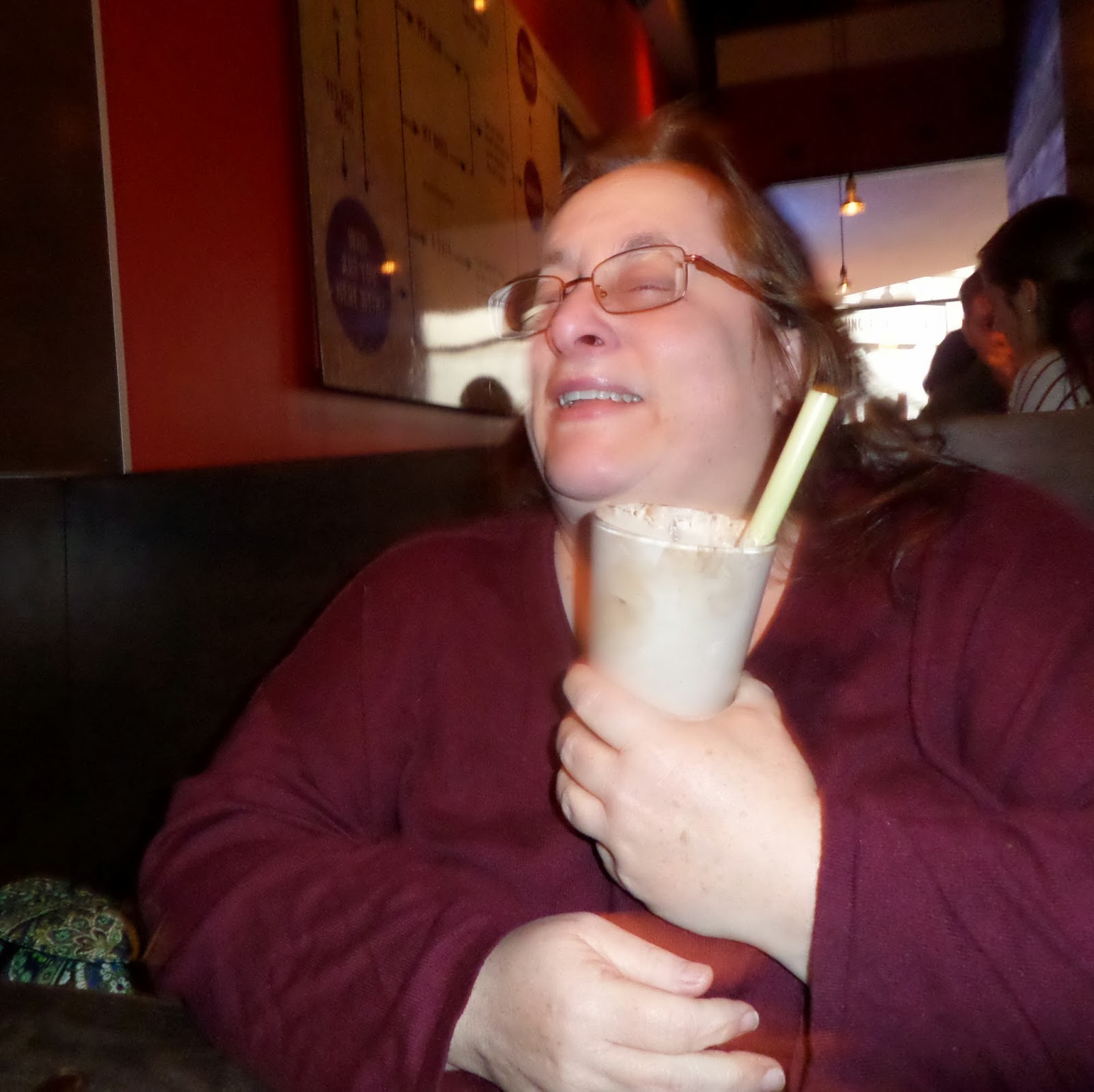 Then I just got real silly and everything anyone said was hysterical to me..... 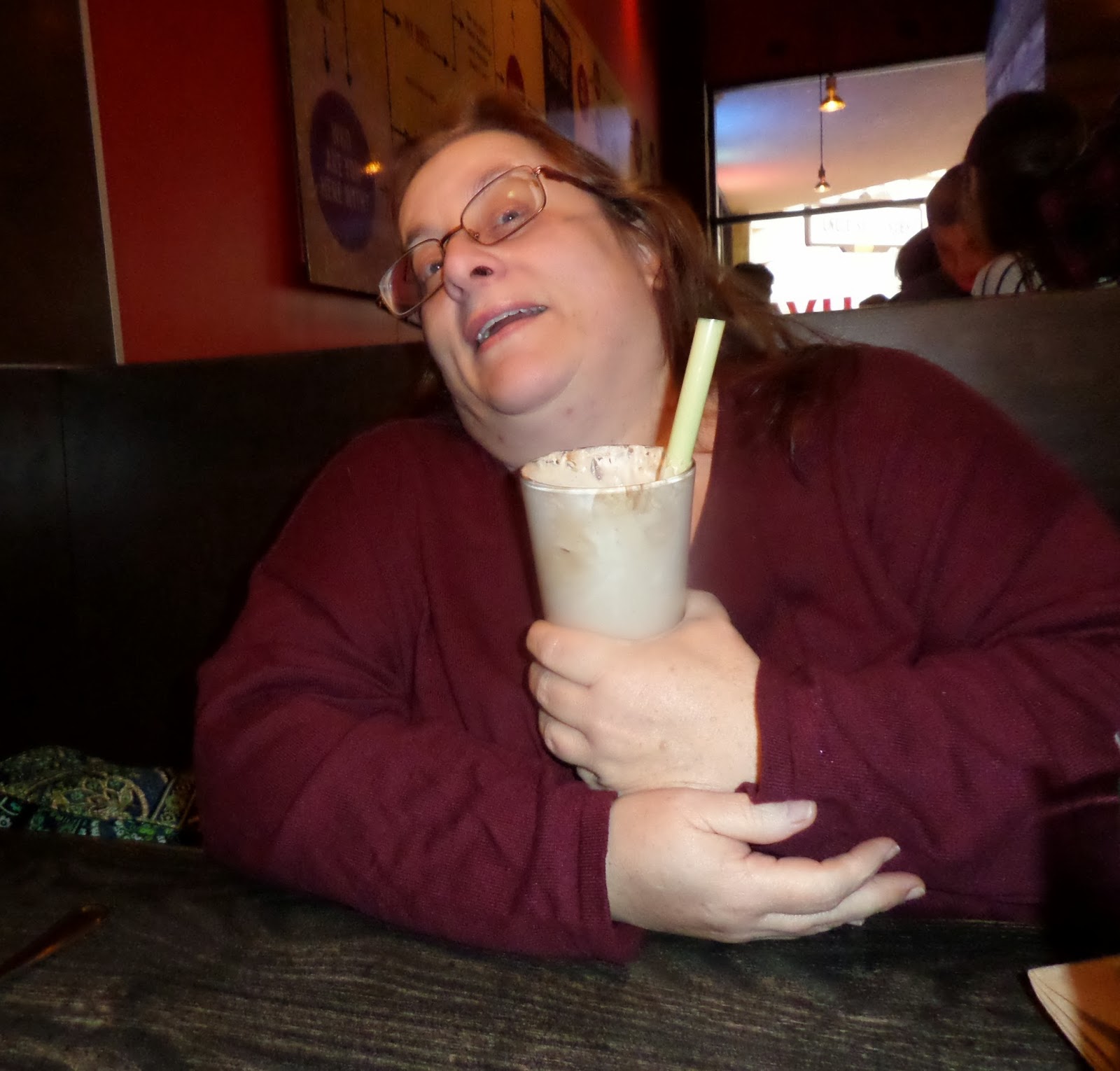 I didn't even finish that shake.
And they had to pour me back into the car to go back to #1 Son's apartment.

I was able to snap this shot before I staggered back to the car...... And here are some bad photos I snapped from the back of the car as I sloshed from side to side, while #1 Son drove through downtown..... 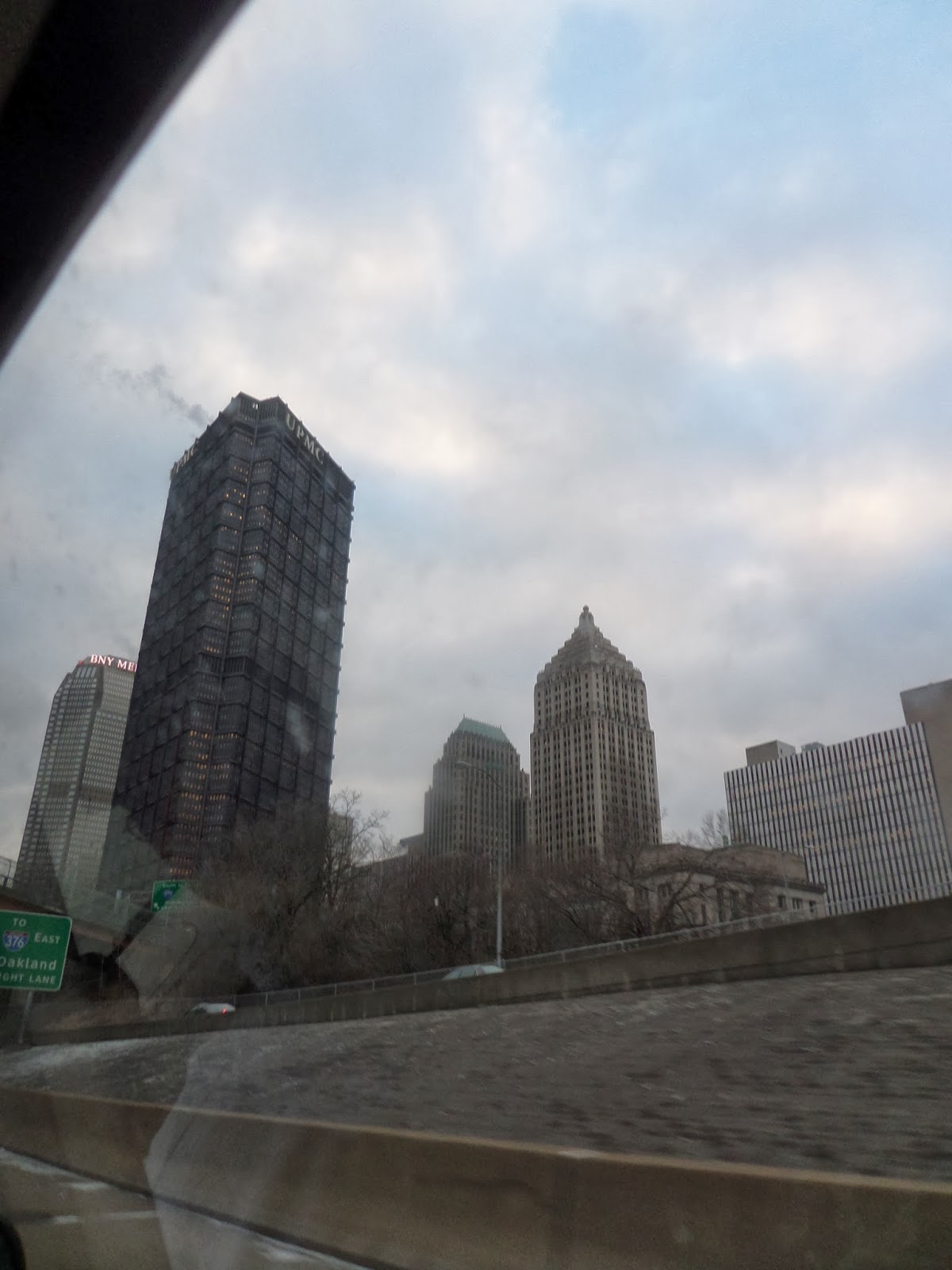 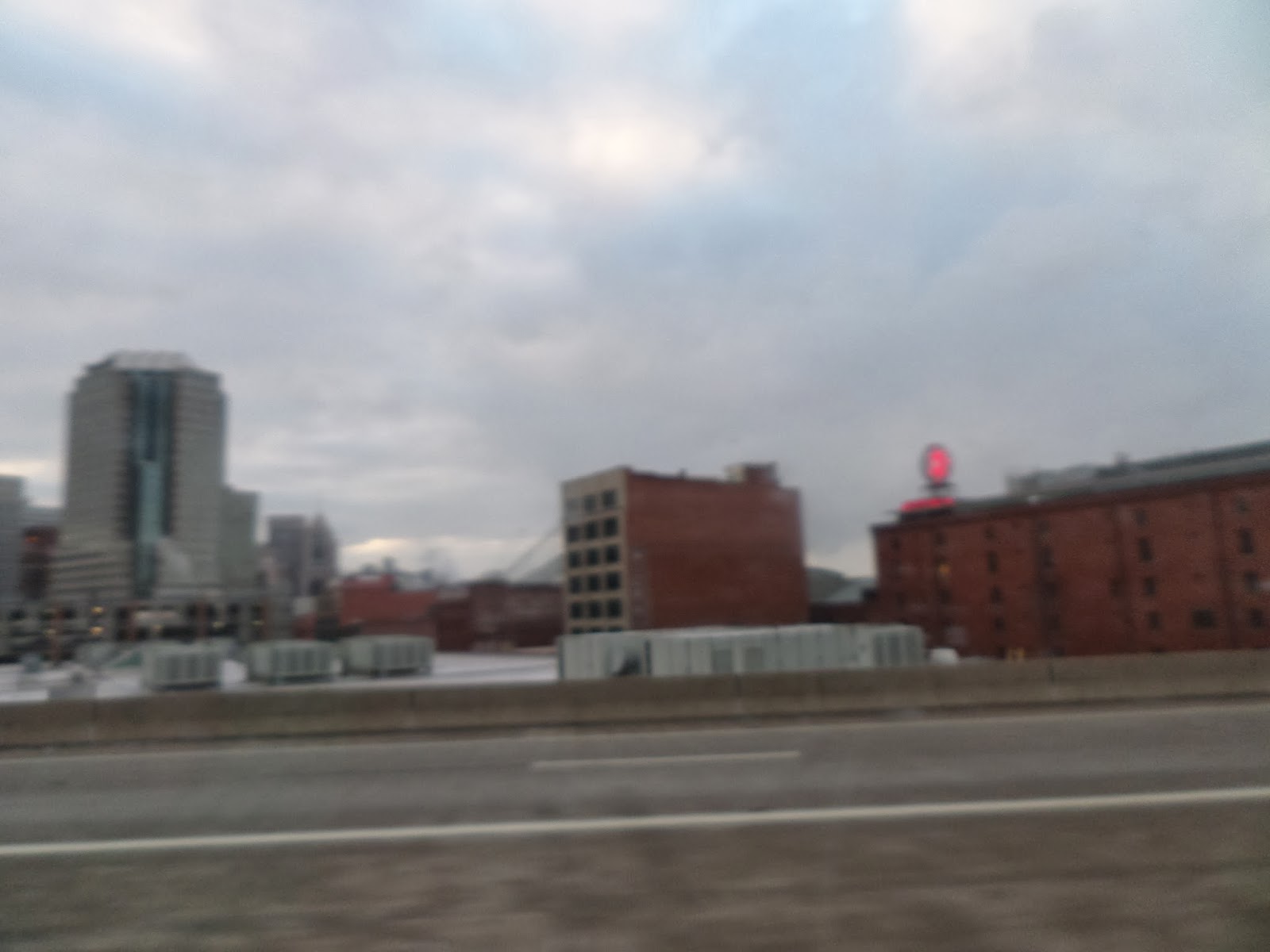 Yes, anonymous buildings.
I tried to get a shot of the giant Heinz ketchup bottle all lit up, but I was too lit up evidently.....

Hubs called Firestone and they had completed the work on the car, so Son dropped us off to pick up and pay for the car.
Ouch.
$900 later we drove the minivan back to the motel.

That evening, we went back to the #1 Son's apartment and he made dinner for us and I got acquainted with Lilly, my newest grandbaby while Hubs and Son drank and talked beer. 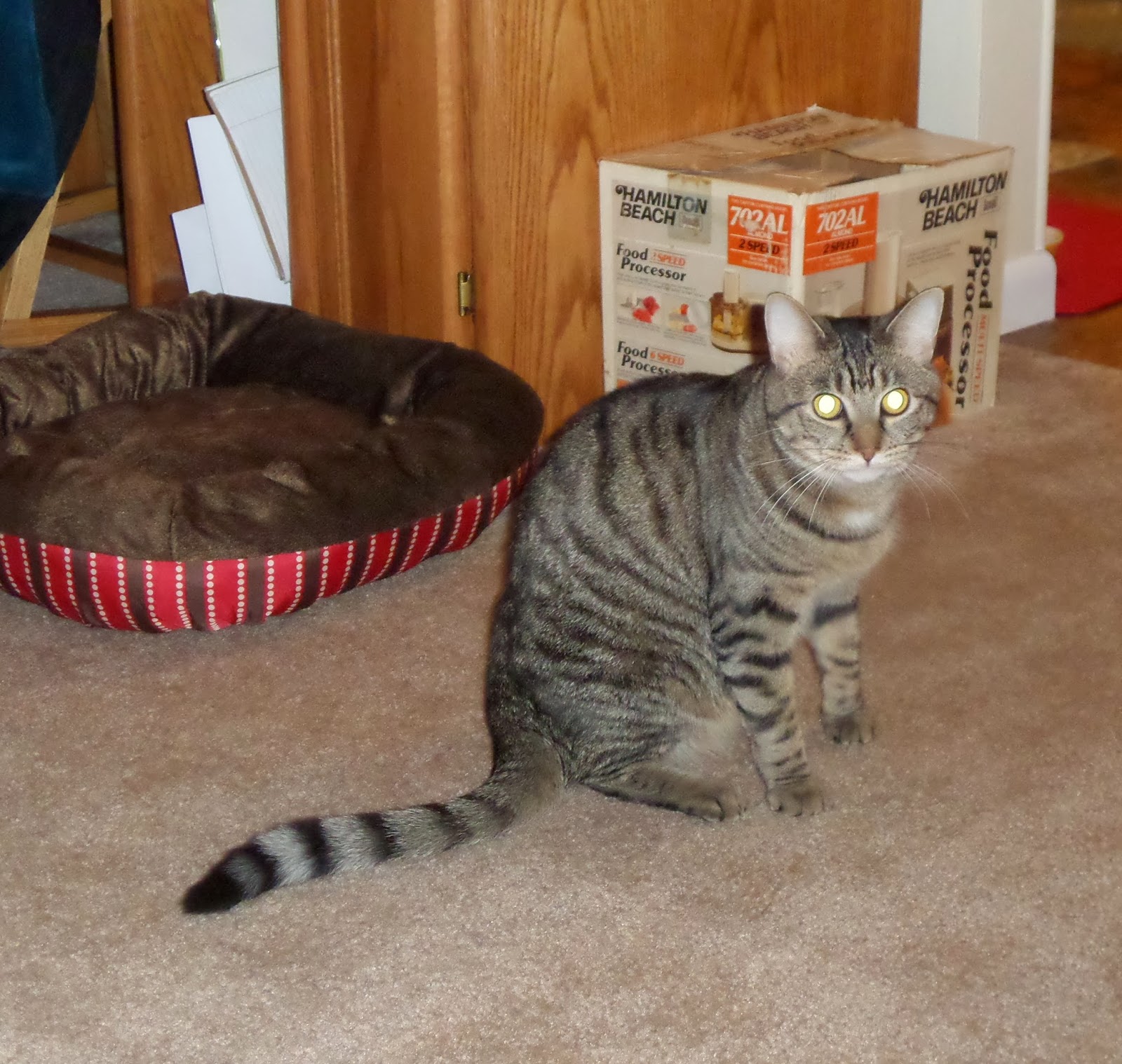 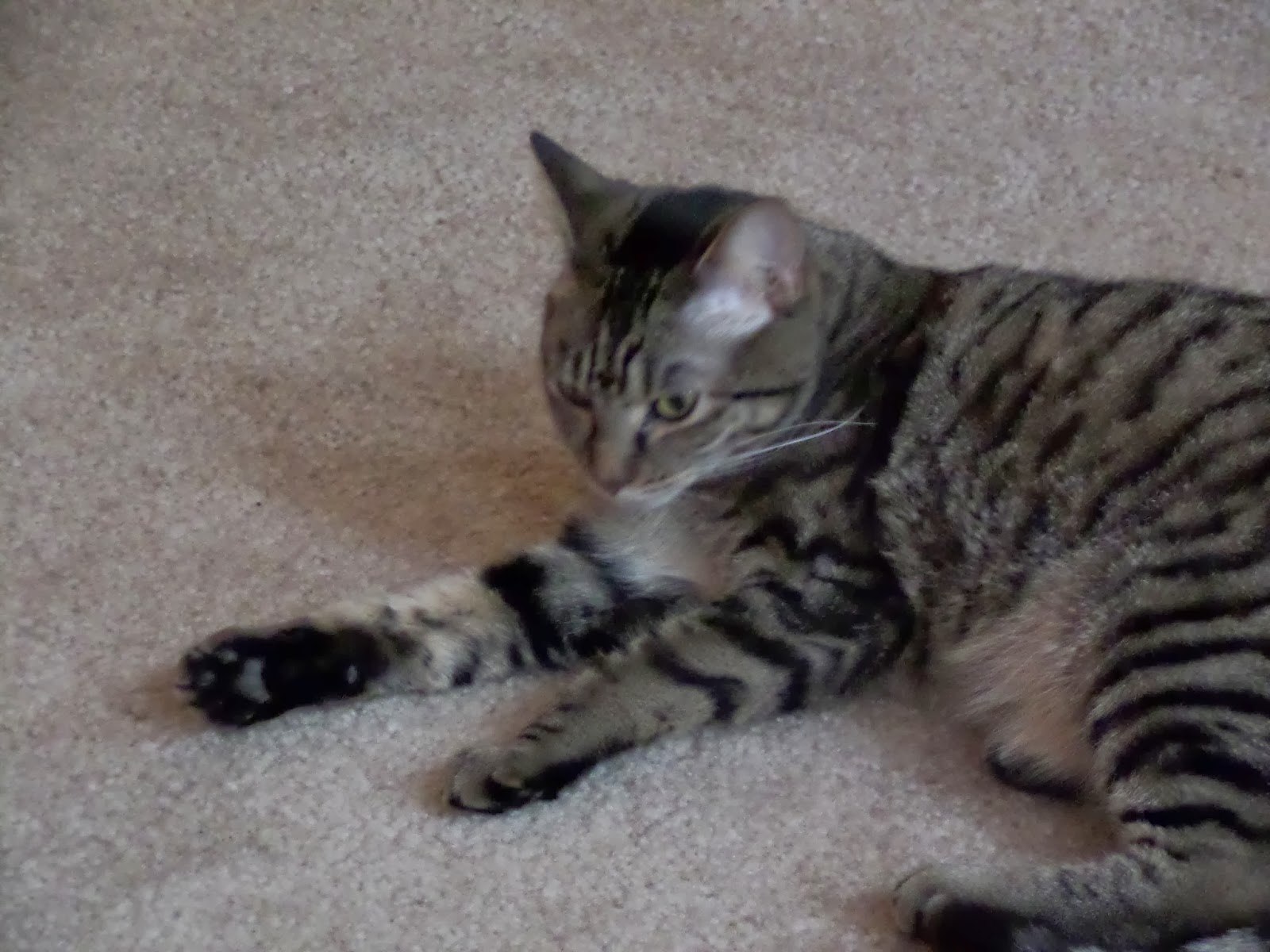 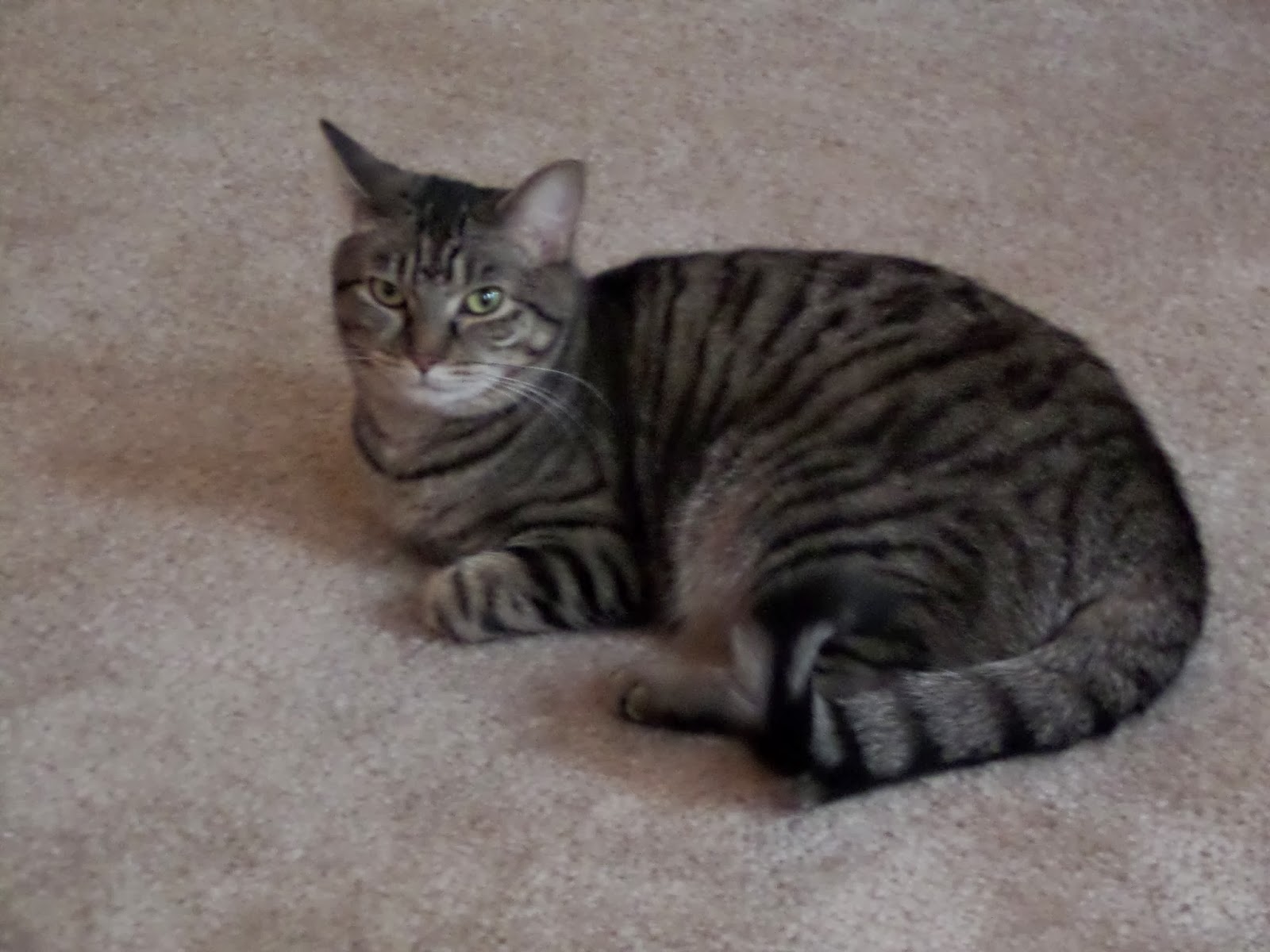 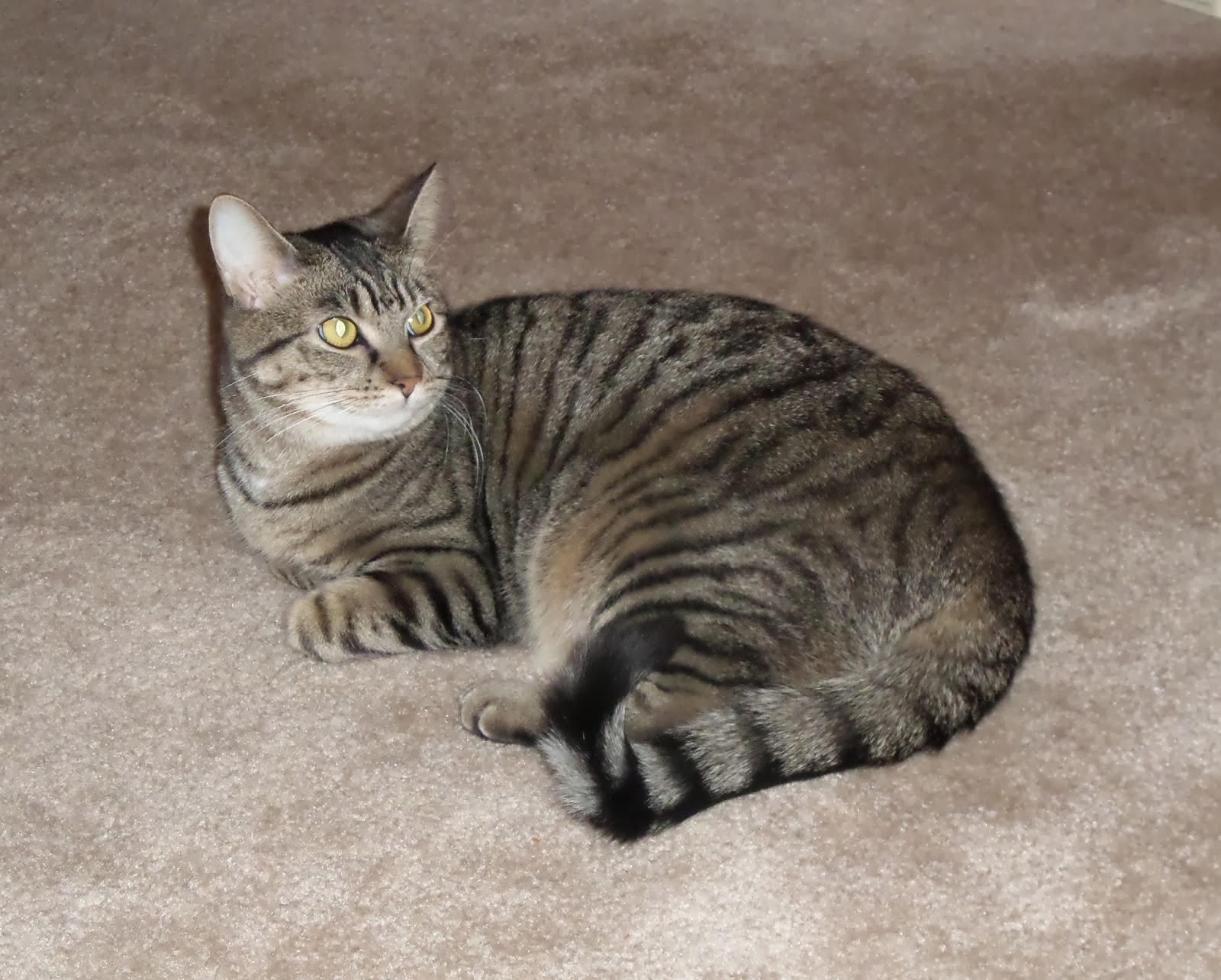 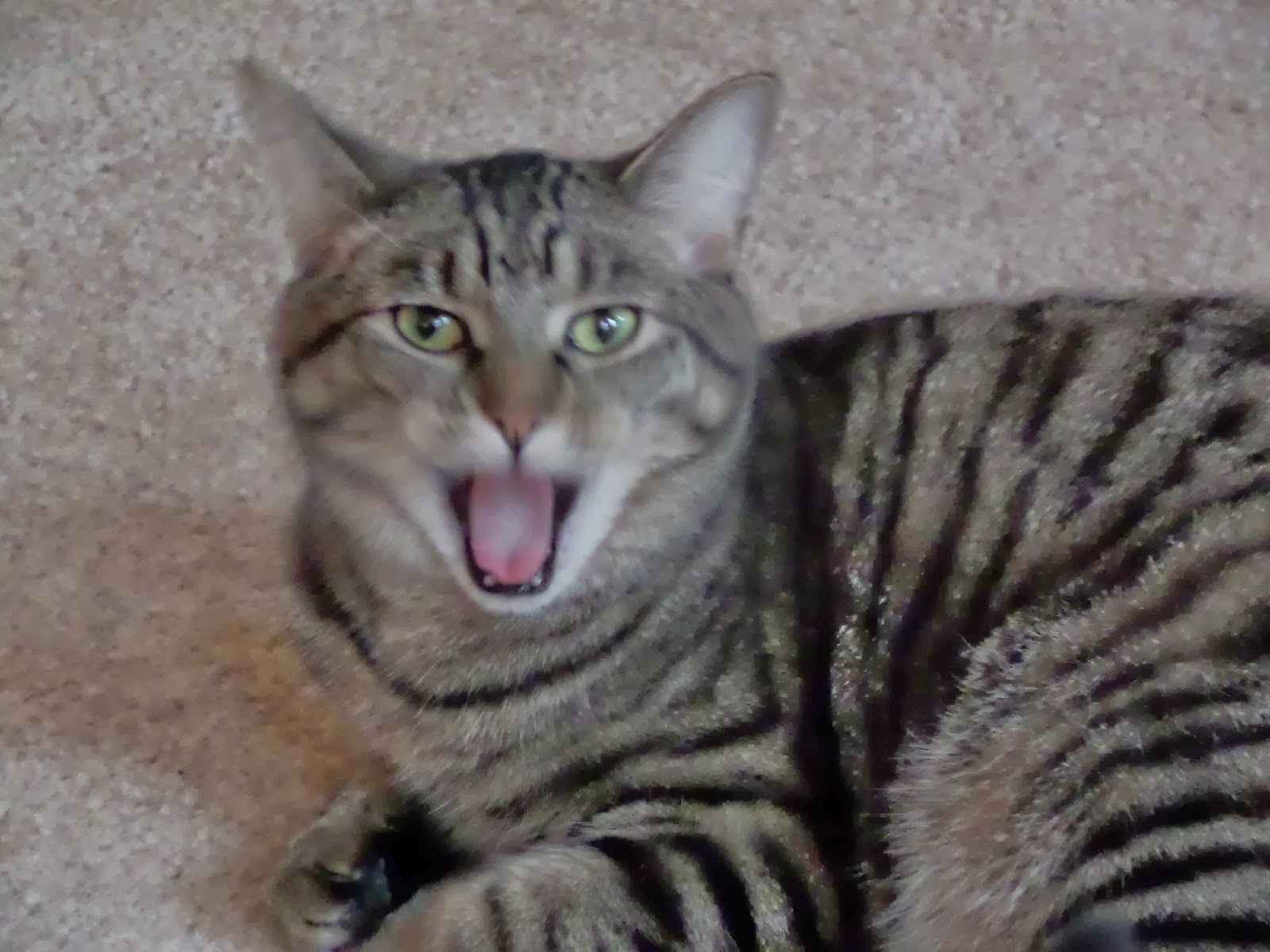 About midnight we headed back out to the motel.
Here is an unexpected Christmas decoration in this part of the world...... 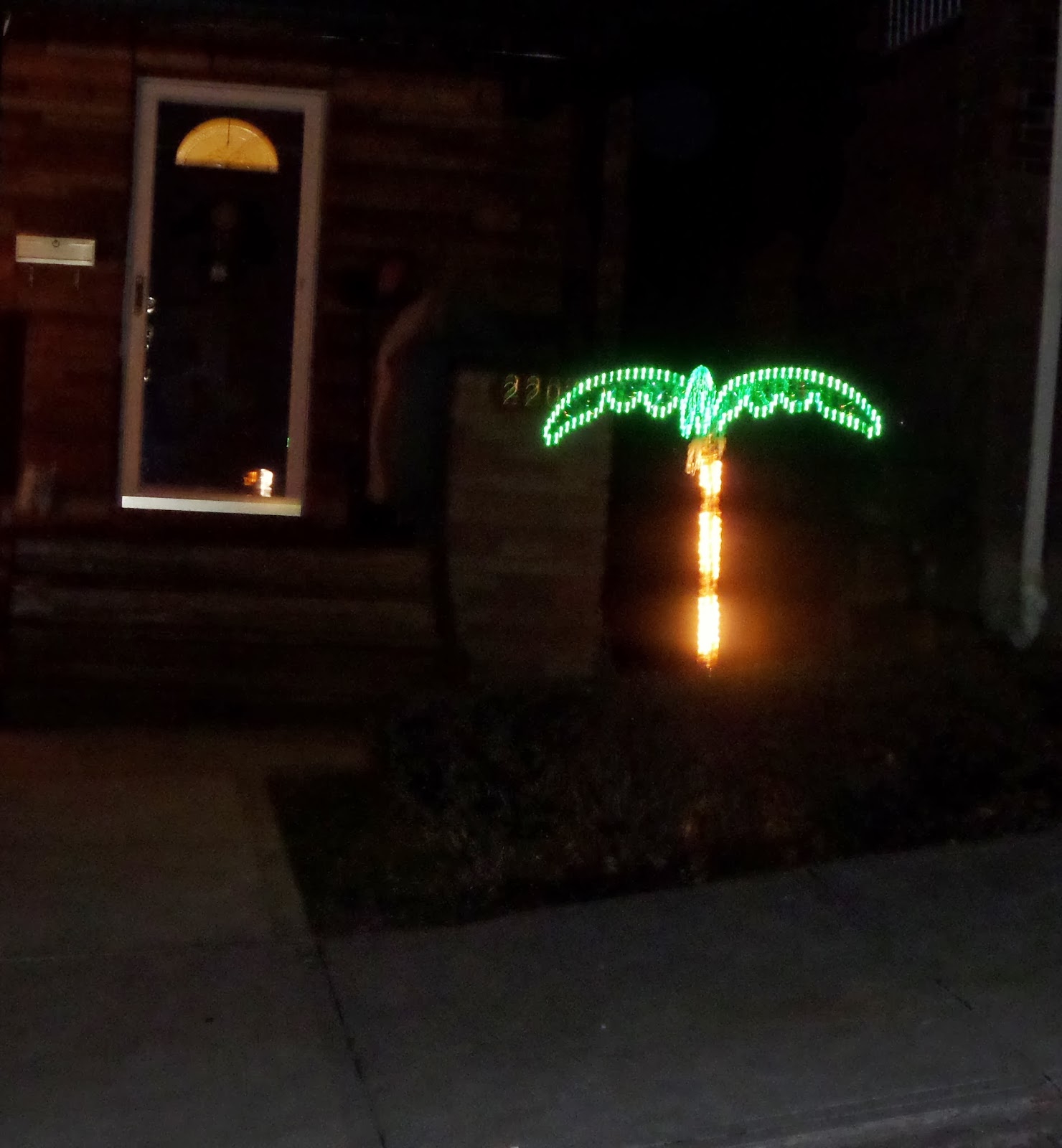 The next day, we hit up the Breakfast buffet for the last time and headed over to #1 Son's place.
We sat around and talked until Lunch time.
Hubs & #1 Son went out to Yinz BBQ to pick up lunch.
It was pretty good.....for a Yankee joint.  8-))

Then after saying our goodbyes and a photo of Hubs & #1 son, we left 'Da Burgh. 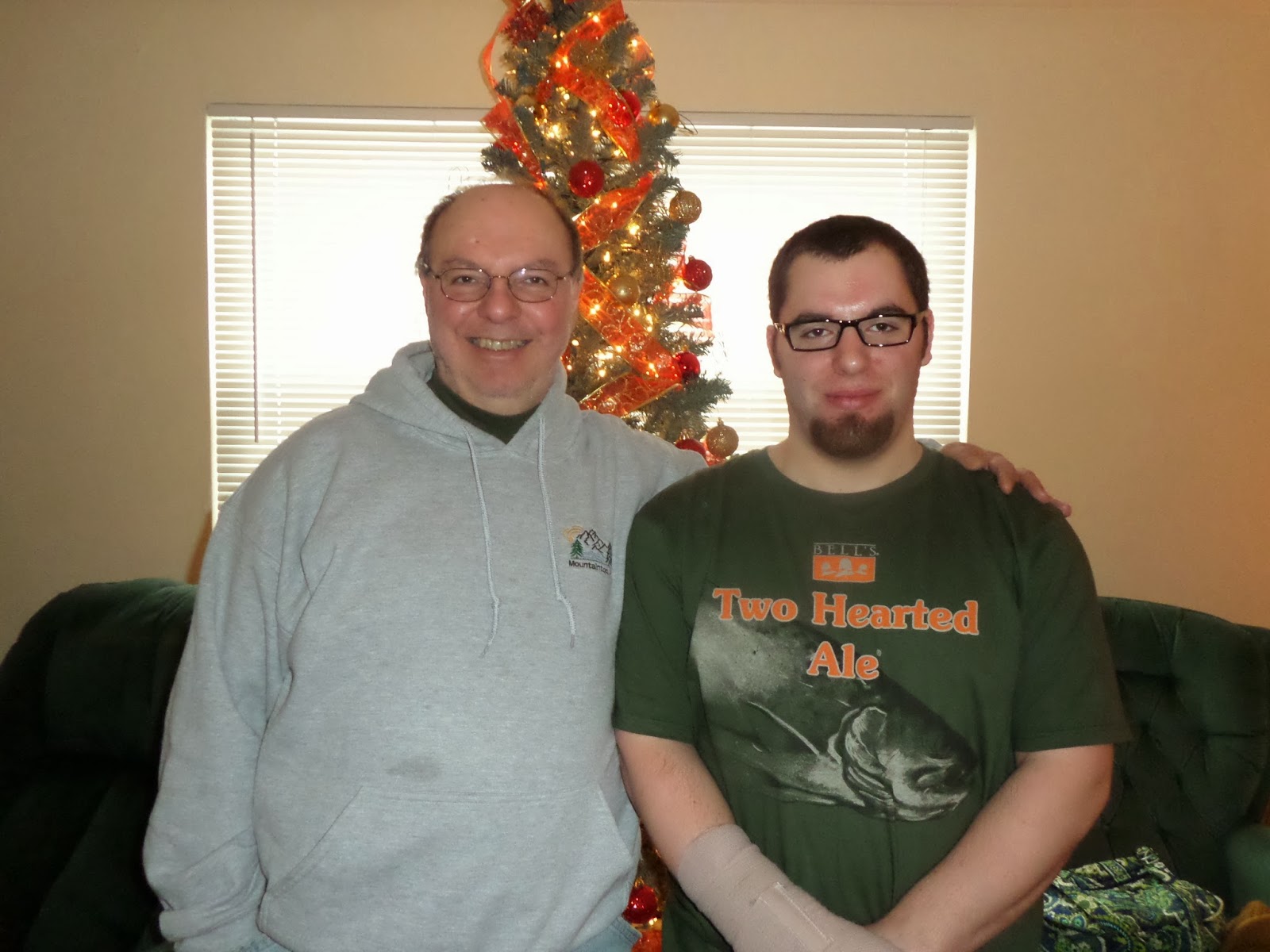 The ride home was quite the adventure, but not the kind anyone enjoys.
You see, the skies opened up on Tuesday and snowed like a MoFo along the stretch of road west of Pittsburgh we had to take to get home.  Between Monroeville and Altoona it was some awful white knuckled driving!....at least for me.
And I wasn't even driving. lol
We saw a guy somewhere in that stretch pass us, then try to make a right turn onto a road and end up sliding into a culvert.

Good times......and unfortunately I didn't take any photos of the ride home.
I think Hubs would have pushed me from the car if I had....

When we hit Altoona we got off the interstate to get gas and then go into a Kmart store to use the bathroom.
As we were leaving the Kmart a woman standing next to me, a total stranger, at the store asked us for a ride somewhere.....we had no clue where it was.

Do perfect strangers come up to you and start conversations or ask you for favors like they seem to do to me?
What about me attracts weirdoes?
I just can't figure this one out!  8-)

So after bidding my new best friend goodbye and good luck, and no, we didn't give her a ride, we got back onto the interstate.
The skies were threatening the rest of the way but the snow held off until we got home. 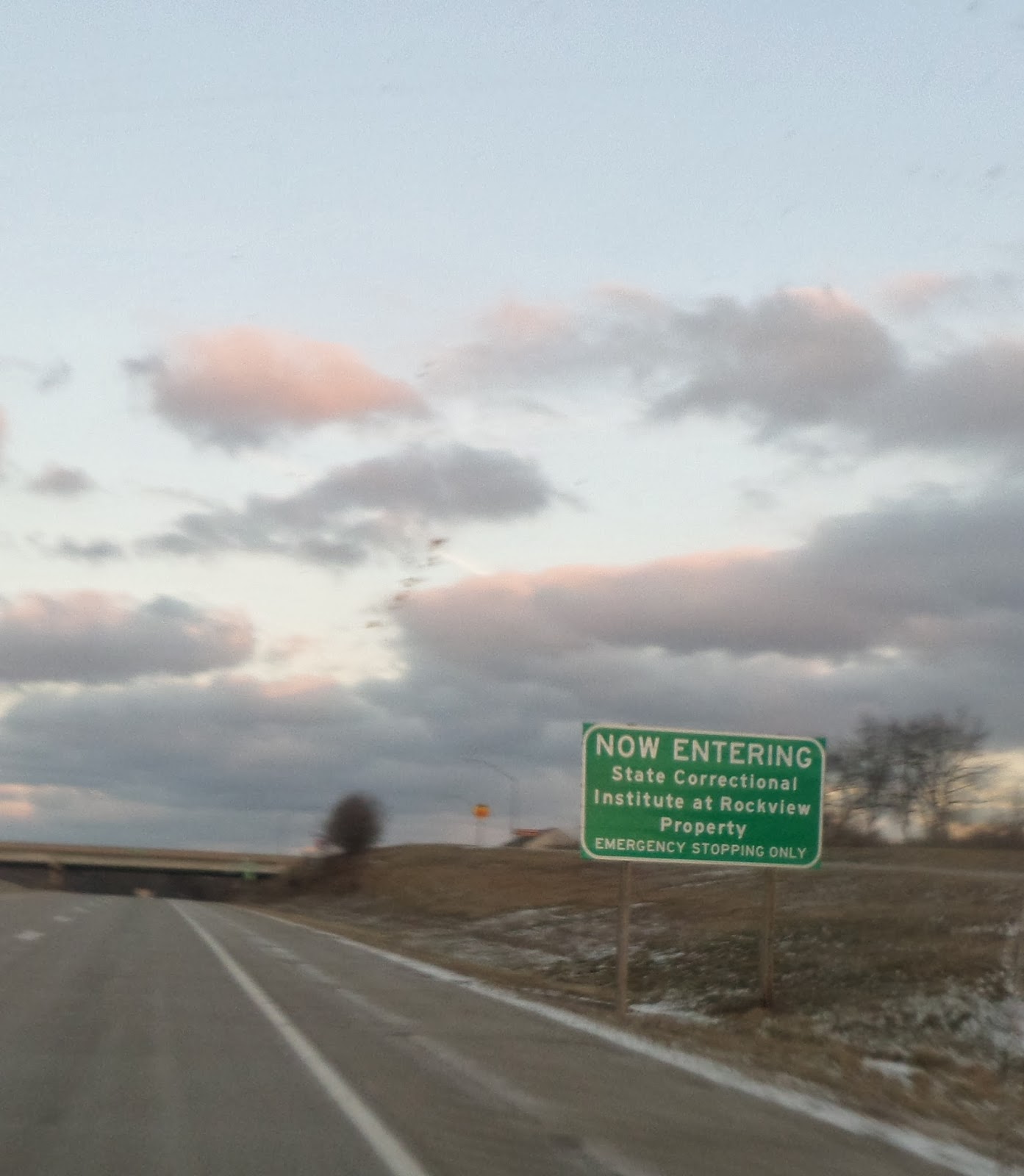 We DID get to drive through a prison on the way home(we had also driven through it in the opposite direction to get to Pittsburgh).  This is near State College PA.
You aren't allowed to stop along this part of the interstate unless you have an emergency....you know, so you don't pick up escaped prisoners or drop off firearms for them.

That's about it for excitement on our trip home.
Heck, I needed a stiff drink or four by the time we arrived due to all the tensing up I did on the drive home.

And thus ends another Sluggy adventure.  8-))