Since our eldest child's job didn't allow for him to come home for Christmas, Hubs & I went out to visit him in Pittsburgh the weekend after the Holiday.
It is at times like this, having to drive from here to Pittsburgh that I am reminded just how damned WIDE Pennsylvania is!

So off we went on Saturday morning, heading west. 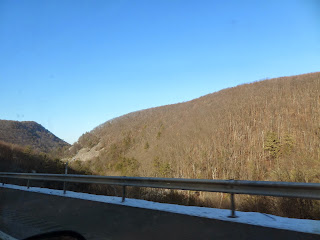 The weather was beautiful and sunny, albeit cold.
The scenery was mountainous and stark. 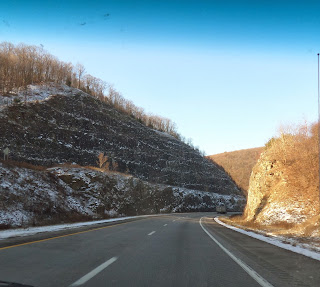 Winter time around these parts is not very lush and green, like where I grew up.  We had vast numbers of evergreens in coastal Southern Virginia so even in winter, the scenery had some green in it.
Not here. 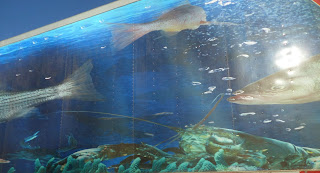 You would think I went to an aquarium by this shot, right?
Actually it was the graphics on the side of an 18 wheeler trailer that we passed on the Interstate.
A Weis(PMITA)Markets truck to be specific.

Dang, I wish they sold lobsters THAT BIG! lolz 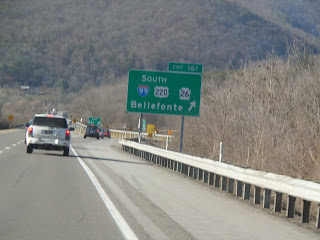 Only 3 more hours to go! 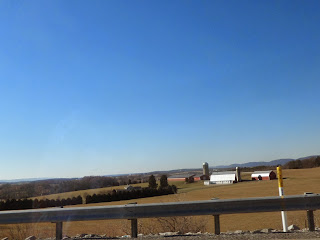 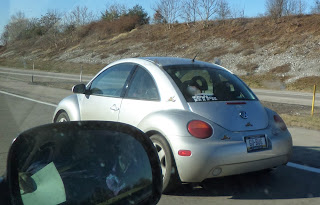 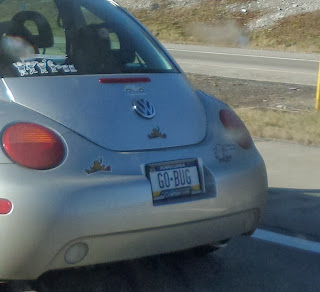 Did you know that Pennsylvania has some very strange town/place names?
Here's a sign for one.... 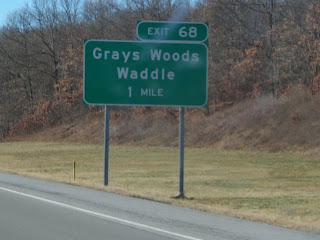 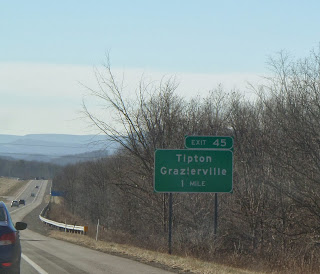 And that sign is for blogger buddy RON.  I wonder if any of his Tiptons lived/settled here?

Then we stopped for lunch in Altoona.
I had never been to Altoona before.
It ain't much to write home about that's for sure.

But they did have a "Five Guys" which is more than I can say for where I live(though they do have one up in Scranton near where Hubs works)..... 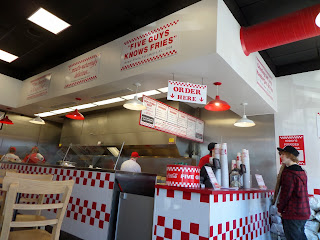 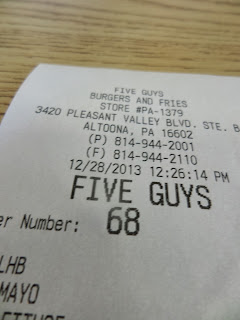 The secret to going to Five Guys, if you order French fries is this......
ALWAYS order a small.  A small comes in a good sized paper cup, filled with fries.
But then after they put your burger(s)and small fries in the paper bag they put your order in, they fill the bag with more fries.
We learned this the hard way, the first time we went to Five Guys down in West Ocean City MD.  Hubs ordered a large fries and we walked out of there with 10lbs. of sizzling hot fried potatoes, enough to feed a platoon. lolz

This time we split 1 small order of fries and there was more than enough!

This place even tells you who grew your fries.....well, before they were fries and just plain old tubers.....not very local so what's the point of this really?
Ok, it's a novelty.  Perhaps I'll ring up M&M Farms and let them know I enjoyed their spuds..... 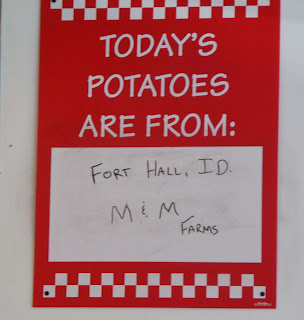 I love the bathrooms at Five Guys.
These shots are for JUDY because I know she would love a bathroom in these colors.
The things I do for my friends...... 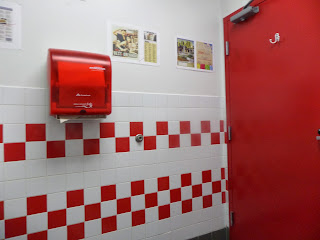 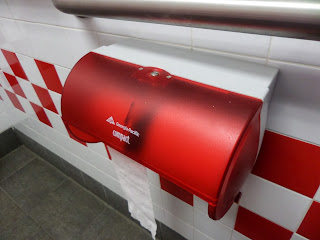 After lunch we hit the Giant Eagle grocery store in Altoona before scooting back onto the Interstate.

Let me explain why we went to a grocery store.
Yah see, PA has some very strange and archaic liquor laws.
You can only buy hard liquor(vodka, gin, rum, etc.)and wines at a state controlled/run store.  The state gives out permits(much like bars that need a liquor license to sell alcohol)to people to operate a "State" store.  These people are usually cronies and family of well placed politicians or people who have made large campaign contributions to some local official.  It's a big racket.
You can also only buy beers and ciders and other "malt" beverages at places with liquor licenses(restaurants and bars)to consume on premise.  If you want to buy beers, etc. to drink at home you have to go to a beverage distributor and buy your beer by the CASE.  In PA, they don't sell beers, et all by the single bottle or 6 pack or 12 packs, just by the case.  It's another racket.

So some establishments have gotten around that "have to buy a full case" deal by getting themselves declared a café or deli.  They sell limited food items(like sandwiches or pizzas)and then are allowed to also sell beer, et al. by single bottles up to 128 fluid oz. total of beverages(that's about 2 6-packs or 12 standard sized bottles of beer)to be consumed off premise.
We have a "beer deli" locally that can sell less than cases because they also sell sandwiches(though I have NEVER seen anyone buy/eat a sandwich in the place).  Plus that Beer Deli also has highway robbery prices since they can, due to high demand and little to no competition.

Two local grocery stores here(Wegman's and Price Chopper)have opened up a café type restaurant in their establishments as well, so they are also allowed to sell up to 12 bottles of beer, et al. for off premises consumption.  Their prices are a bit better but the selection is not all it could be.

So our son had let us know that the grocery chain out by him, Giant Eagle, also has café/beer selling locations(but not all of them have this), so we stopped at the one in Altoona to see if they had the "good stuff".
And good stuff a plenty was to be had, yessiree! Too bad I couldn't buy the whole case of this! lol 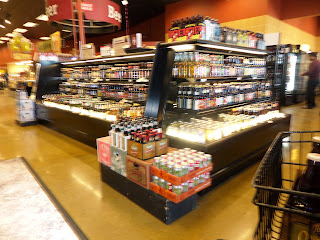 The delicious view from my chair in the café......the mix and match your own 6 pack section. 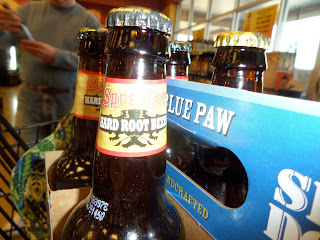 And they had 3 bottles of this delicious elixir on the shelves, so guess who scarfed those up?
Yours truly!
The beer distributors in our part of PA don't carry this stuff yet so I need to stock up when I find it!!

Then it was back on the road south and westward......

One of my favorite weird PA place names...... 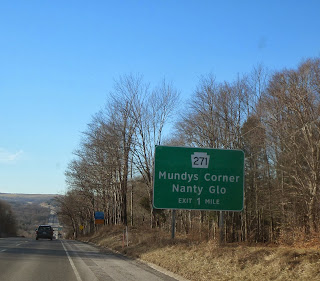 I always start hearing the song "Morning Glow" from PIPPIN in my head when I see that name.....

We finally arrived on the outskirts of  Da 'Burgh to our hotel an hour before dark.
Of course our Mapquest-ed directions told us to drive PAST the light where we should have turned onto the road to our hotel, but hey! what do you want from free directions, right? 8-(

This motel was up a windy ass road(you didn't think you'd EVER get to the top)and overlooked the interstate, so convenient for getting about town.
The motel though was 3 stories tall, built into the side of the hill.
We had asked for the "handicapped accessible" room and according to the confirmation I got, that's the room we were suppose to get.
So our room was on the 2nd floor, which meant we had to go down 2 flights of stairs from the lobby(which was on the 3rd floor technical)or 1 flight from the outside side entrance door and there were NO ramps.  Thank goodness I wasn't still in a wheelchair or anything!

Here is me bitching about the supposed motel handicapped accessible feature on our way out to dinner......


We called son when we got in to the motel(before going out to dinner)and Hubs wanted to make a dry run to find his apartment before it got dark, since we both HATE trying to find a place we've never been to in the dark.
We were suppose to go to the apartment when he got off work at 11pm and do the Christmas gift exchanging that night with son and his girlfriend.

So we took off for son's neighborhood which was a few exits further down the Interstate.
Found the apartment building and then decided to find somewhere for dinner nearby.
There was a Giant Eagle grocery store just off the Interstate where his neighborhood was located so we popped in to see if they had the café set-up and carried any alcohol.
They did so I got another 2 4-packs of that Hard Root Beer I like so much.
Then we hit the beverage distributor store in the same shopping center and hit the jackpot..... 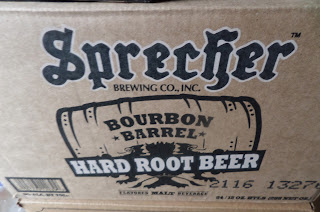 Time for dinner now so we ate at this unassuming little joint...... 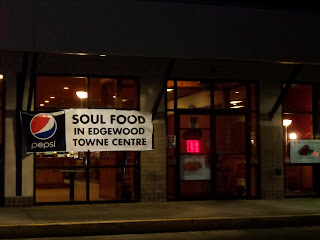 Now you know this sounded like a piece of home to me......Southern Hospitality....... 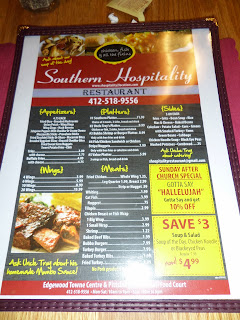 I love the "Sunday After Church Special"....say "Hallelujiah" to your waiter and get 10% off your meal.  lolz 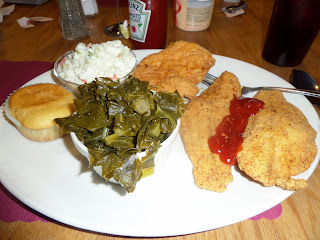 A piece of fried chicken, 2 catfish filets, coleslaw, a corn muffin(bread) and a big cup of fresh collards!
slurp slurp....
The corn bread/muffin thing was too sweet but otherwise it hit. the. spot.
Funny thing was that the place didn't have single PORK product.....no bbq, no pork ribs, no fried pork chops, no country ham.
How can it be Southern Hospitality without PIG?!?!
Southern Muslims maybe......lol

After being stuffed to the gills we headed back to the motel(oy! the stairs!)to relax and wait for 11pm to arrive.
Drove back to son's apartment to get the evening's festivities started. 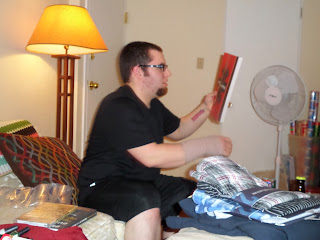 The son inspecting a gift..... 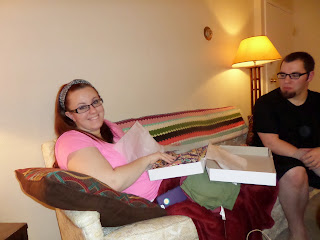 His girlfriend opening her gift from us, a new Vera Bradley purse....I think she likes it! 8-) 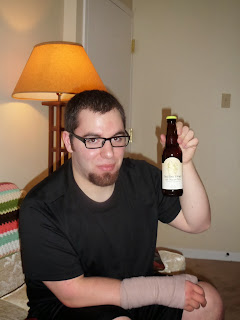 A friend of Hubs who is a beer connoisseur gave him a bottle of Dogfish Head 120 Minute IPA to gift to #1 Son.  I had a taste....that's mighty strong stuff!! 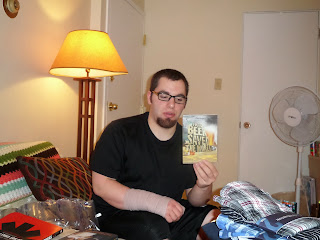 Son also got about a case of assorted microbrews we had picked up on our travels in August.
Remember Matt, the bottles of Southern Tier Crème Brulee are for your girlfriend, not you.....lol

And to top off the evening, I got to meet my new grandbaby...... 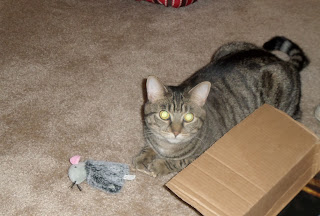 Her name is Lilly.

We slinked back to the motel around 2am and fell into bed, dog tired....or should that be cat tired?
Do cats even sleep....does anyone know? ;-)
What a long day it was......and such a long update too!

The July Giveaway is now OPEN.
Go to this link... https://simpleslug.blogspot.com/2021/07/ready-for-hot-sweaty-giveaway.html
to enter. Entries close on July 23rd. Good Luck All!