Check out Day Four of the Road Trip HERE if you didn't catch it before or if you forgot it.  Just so you know there will be a quiz when I am done. 8-)
*********************
So Day Five of the Great Summer Road Trip of 2013 had arrived and we had a wedding to attend.
This was the whole impetus behind our trip, what the trip was built around......getting to Southern Illinois to see Hubs sister get remarried.

But the wedding wasn't until late afternoon so we had almost a full day to kill first.
So we backtracked down the Interstate to do a little shopping in town near Arcola called Tuscola. 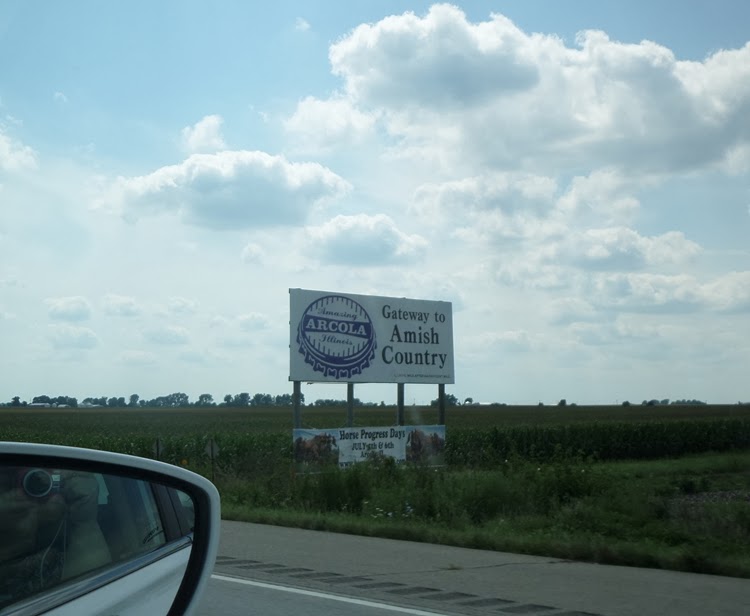 We found a discount store called Shopko and picked up some deals--
S/S dress shirts for $5.99 for Hubs' work
Bags of smoking wood chips on clearance for $2.99 each
A fine mesh rack/basket for cooking fish/vegs on the grill on clearance $4.49
A pair of yoga pants, a top and a sleep shirt for me at a combined cost of $25.37

Let me just say that those aren't the deals I went there to pick up.  You see, I did a search online and found that this chain, Shopko, carries Sprecher's Hard Root Beer.....you know, that crazy good stuff I found at the liquor store in Sonya's home town and ONLY bought 1 four pack of it.  ARGH!!! 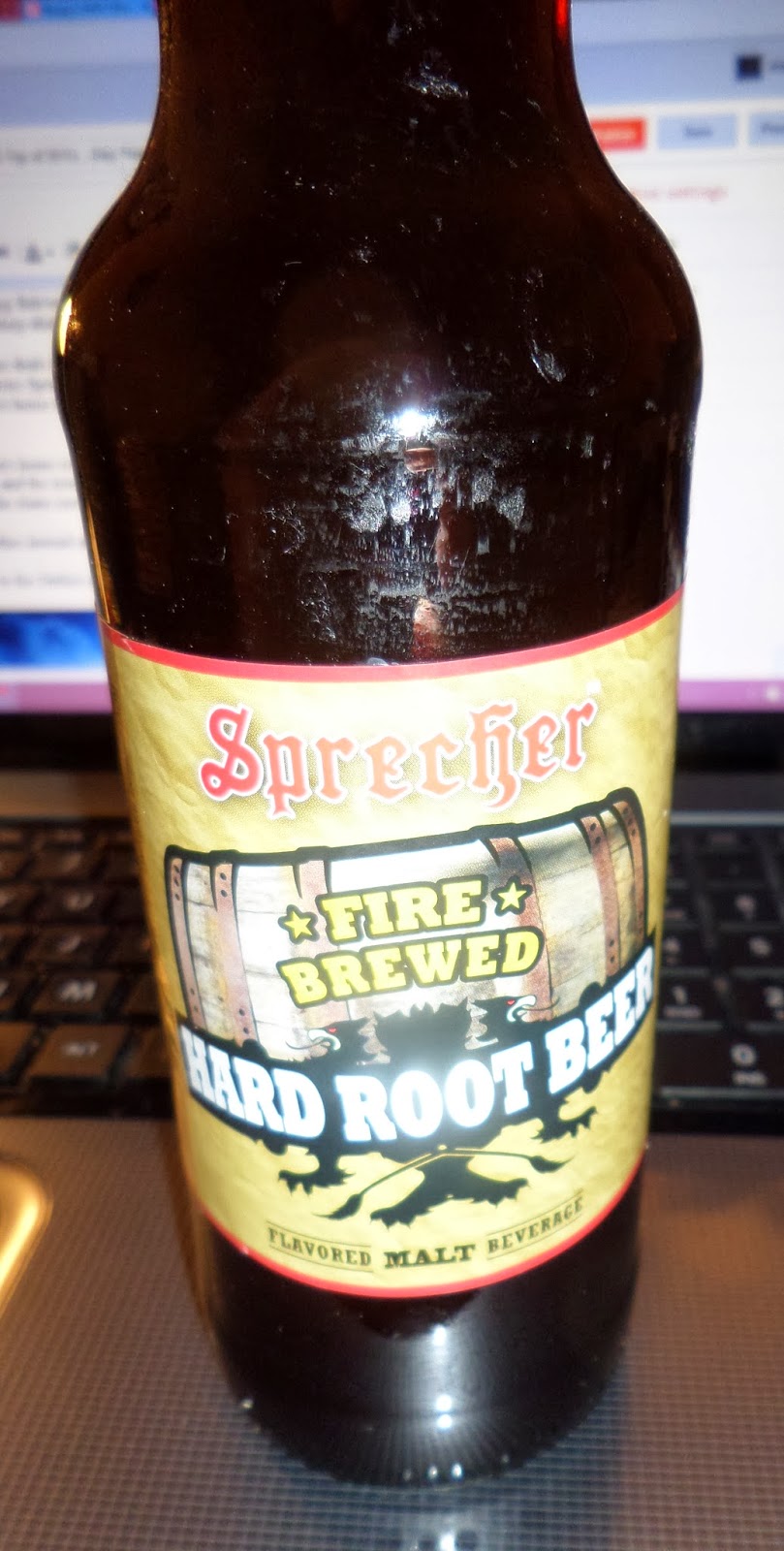 So short of driving back to Sonya's house to fill our trunk with cases of that shit, I decided to see if I could pick it up somewhere else and the internet lied to me and said Shopko had it.
Well, actually the internet said the chain carries it but this particular Shopko did not.
Sigh......
So I bought wood chips and clothes instead and whimpered softly all the way back to the hotel.

Then we went across the street to the Outlets and hit the Vanity Fair store. 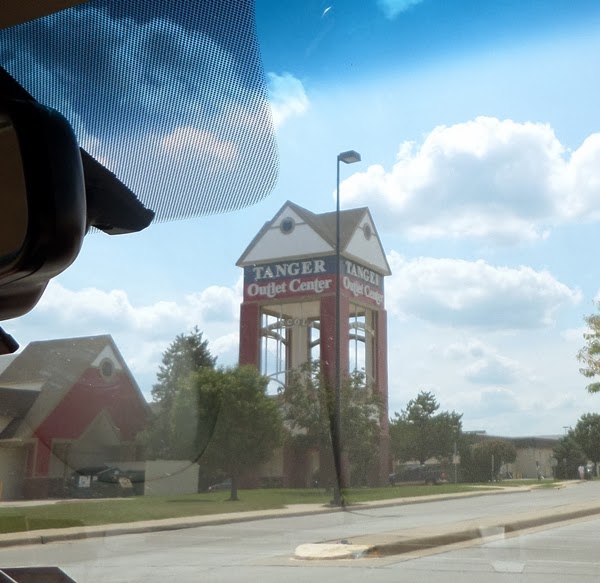 There is a VF store about an hour from us in PA but we don't get down there much anymore.
We took the opportunity to hit this one up because it was like, right there! We left with 2 pair of jeans for Hubs, 2 pair of shorts for #2 Son and 2 pair of pants and some "underthings" for me.
Stuff we needed to replace that were wearing out so why not buy it on our vacation when the opportunity presented itself? ;-)

On the way back to the interstate I spied this Denny's.... 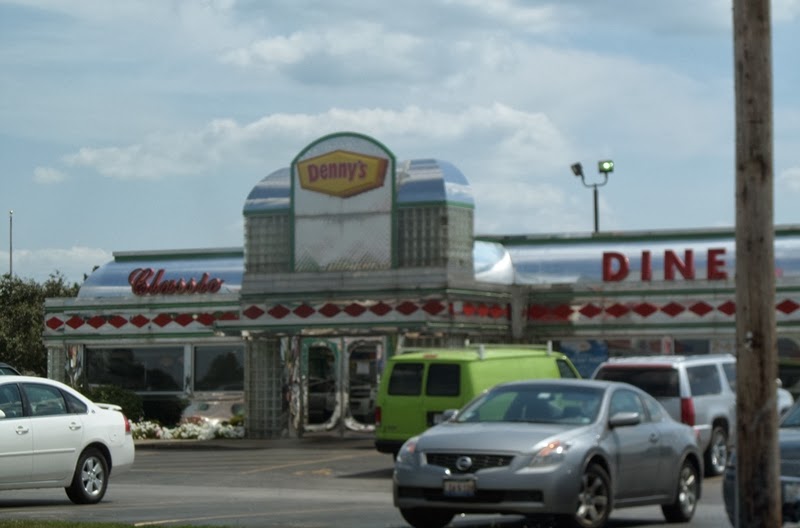 It was built to resemble an old fashioned diner.  I saw quite a few of these in this retro-style later on during this road trip.  It was fun because I had never seen a Denny's that looked like this before.  Evidently, I need to get out of the northeast more often.  lolz

Then we headed back to the town we were staying in, but first a stop for lunch in town at the original Burger King restaurant. 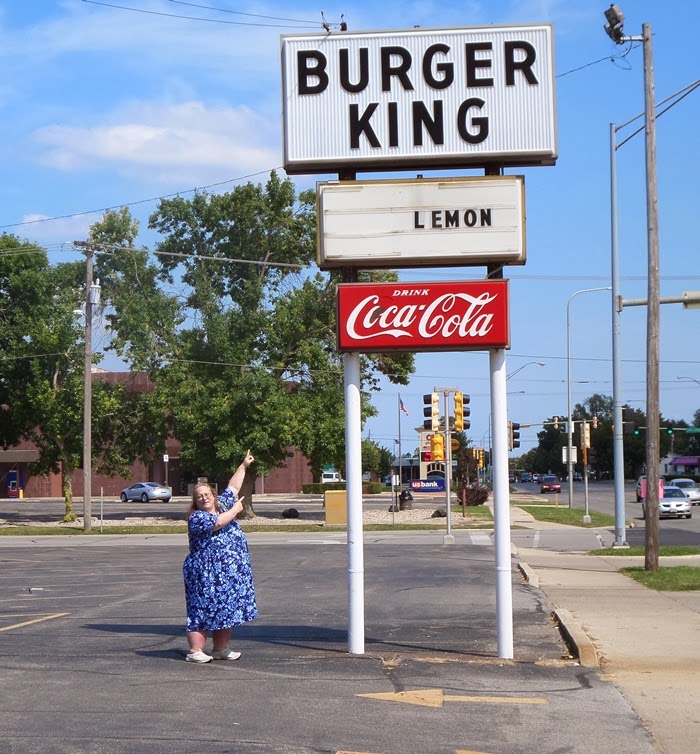 Yes, I am the crazy lady standing out in the parking lot pointing at the sign..... 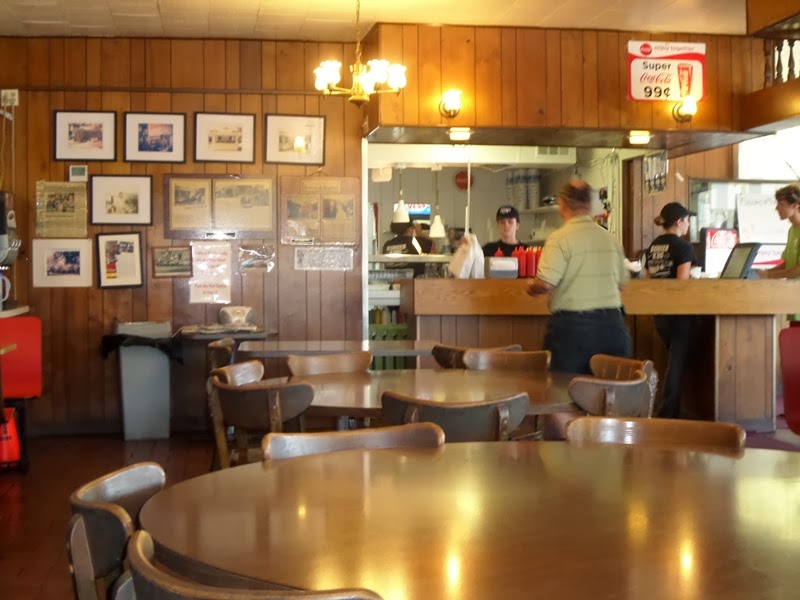 As Bette Davis was want to say in some old film, "What. a. Dump!"
I don't think the décor has changed(except for the addition of many framed newspaper clippings and photos)since the Hoots family bought the Frigid Queen ice cream shop in 1952 and expanded/built the burger joint next door, naming it the Burger King in 1957.  In 1959 they registered the name BURGER KING in the state of Illinois which proved to be a great move once the Burger chain of the same name started putting up their joints in the 1960's. 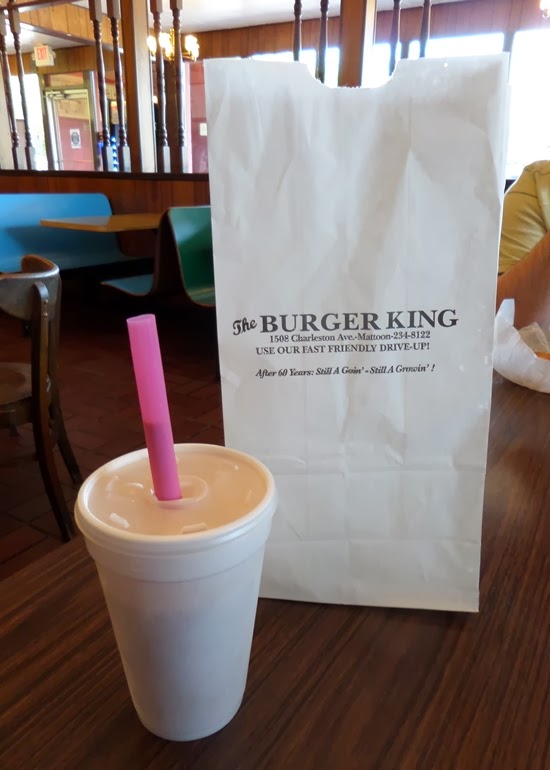 The Hootses sued and won.  That burger chain of the same name are not allowed to throw up one of their shacks within 20 miles of the original Burger King joint in Mattoon Illinois.

The menu here is a bit more expansive than that chain place(I got a BLT).  It's priced about the same as that big chain and tastes about on par with it as well.
The food isn't something to go out of your way for but it was nice to be there to say I've "been there, done that".

After lunch it was back to the hotel to change for the main activity of the day, the wedding.
The ceremony was not in town but in another town about 45 minutes away at the Best Wedding Chapel in Shelbyville, Illinois.
It's a private company that does weddings run by a guy with the last name of Best.  You may have seen these folks on the CMT channel if you watch that sort of station.  They were a part of an episode of "Trick my Truck"(like MTV's old "Pimp My Ride" show) where the show did over a vintage fire truck into a mobile wedding chapel truck..... 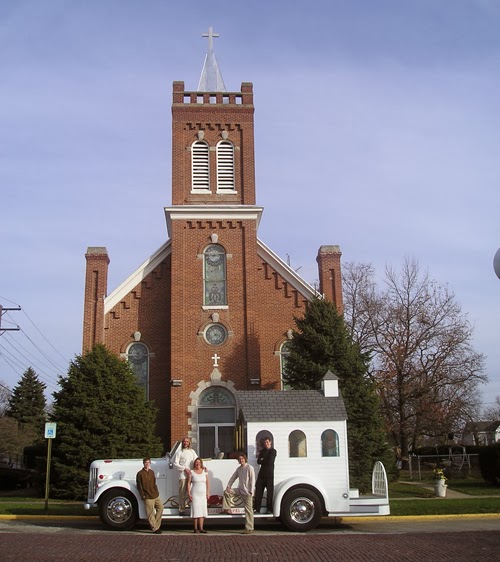 So it was a glorious day weather wise.
The venue was an old Catholic church, built in the 1870's and now a private wedding chapel. 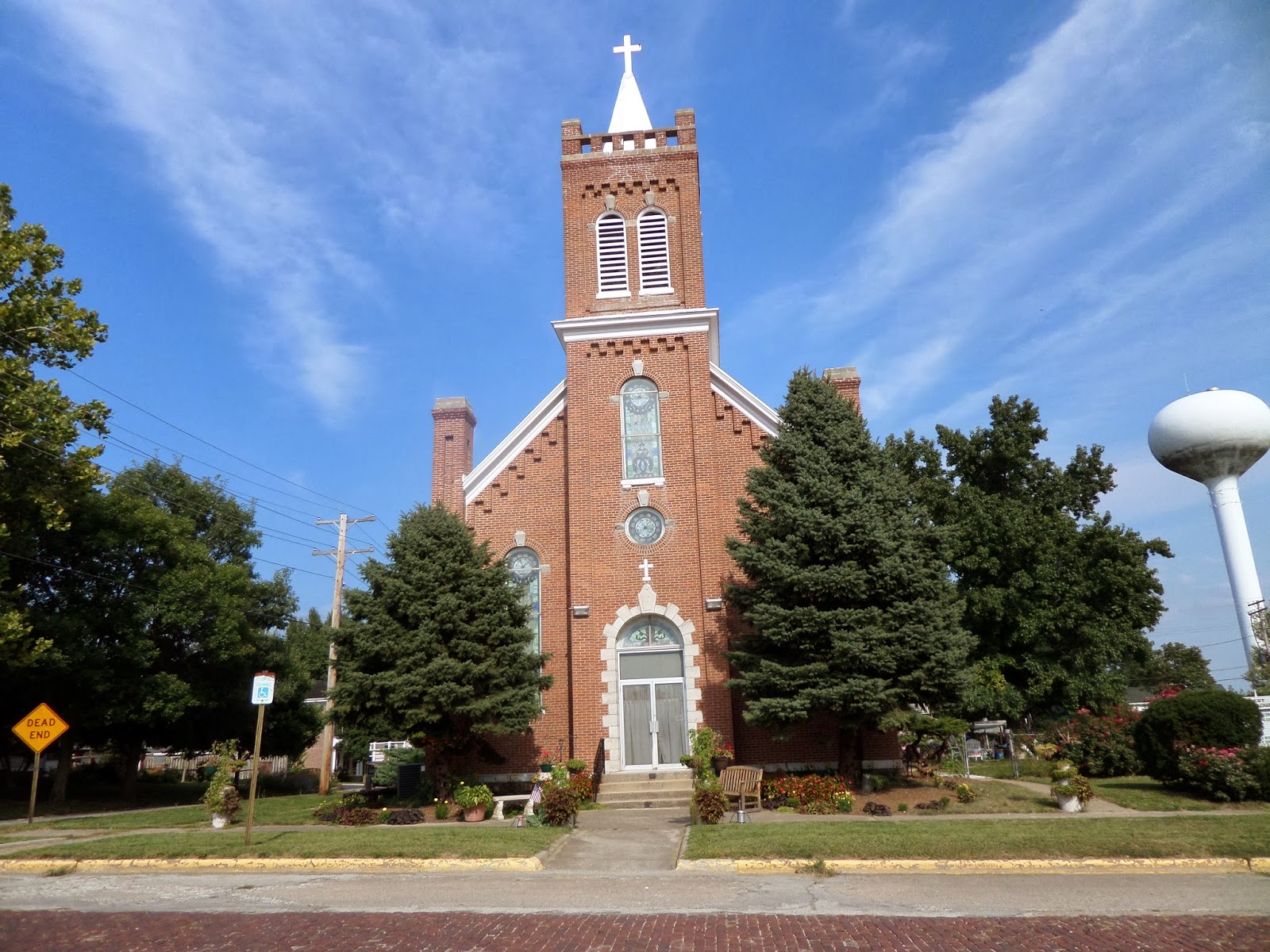 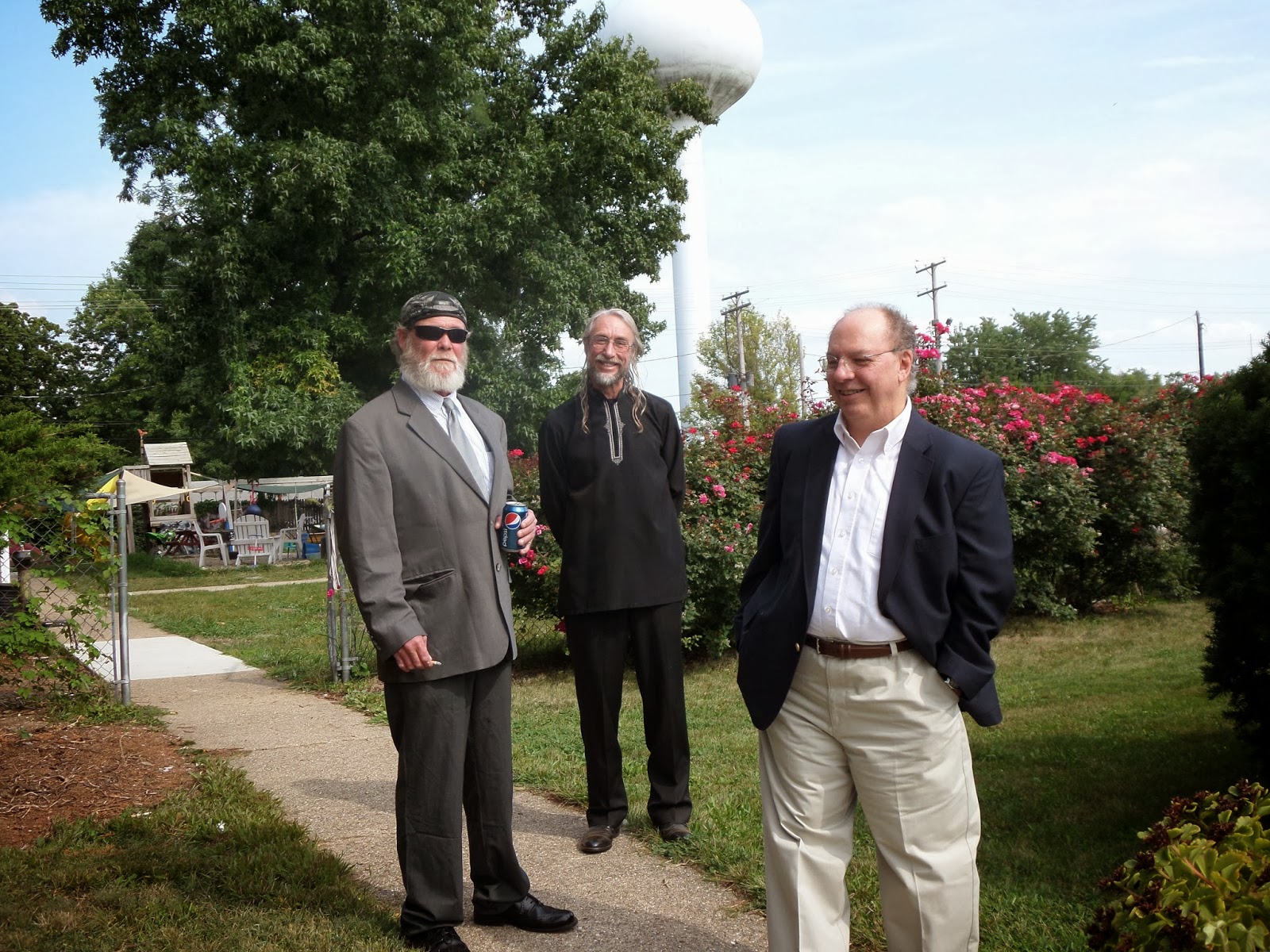 The groom with Hubs and Brother Darrell, the officiant. 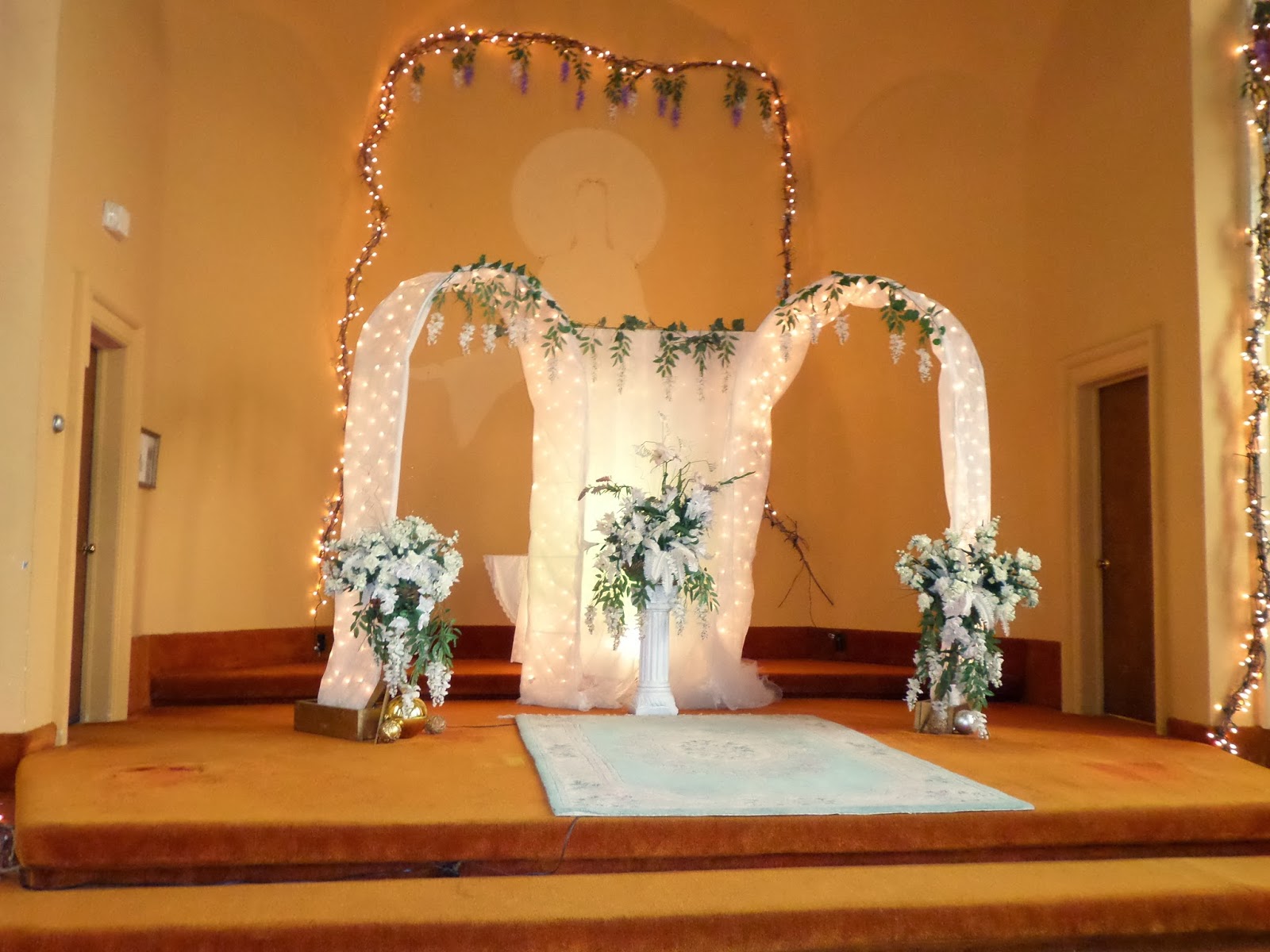 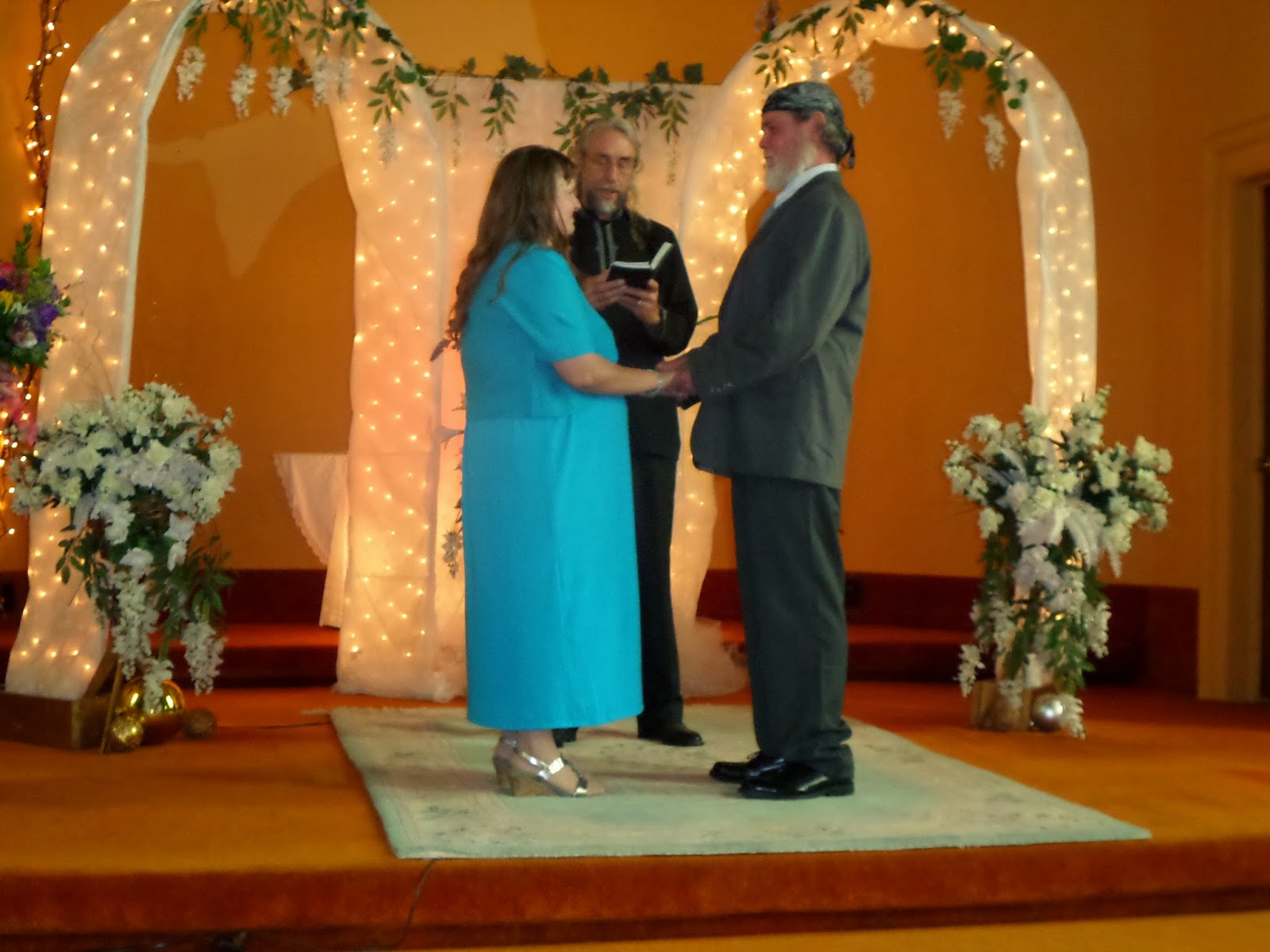 During the ceremony.  And yes, the groom is wearing a doo rag on his head. ;-) 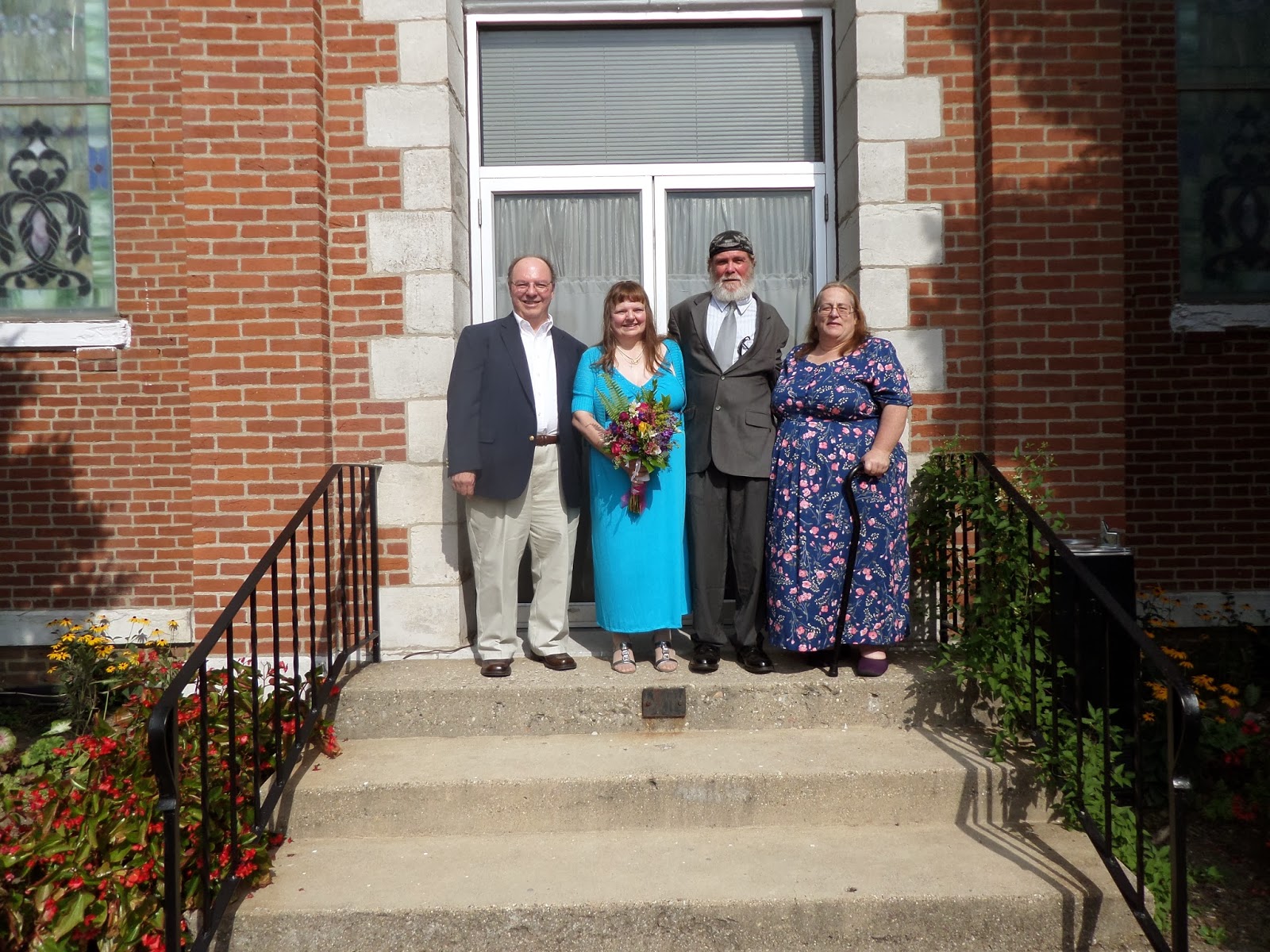 Hubs and I with the happy couple.
We were the only ones from my sister in-law's side of the family who made it to the wedding.

Then we had the long trek back to the reception venue, which was in the town where the sister in-law & her new Hubs live.

But first a few shots of the historic courthouse in Shelbyville, which was across the street.  It was completed in 1882. 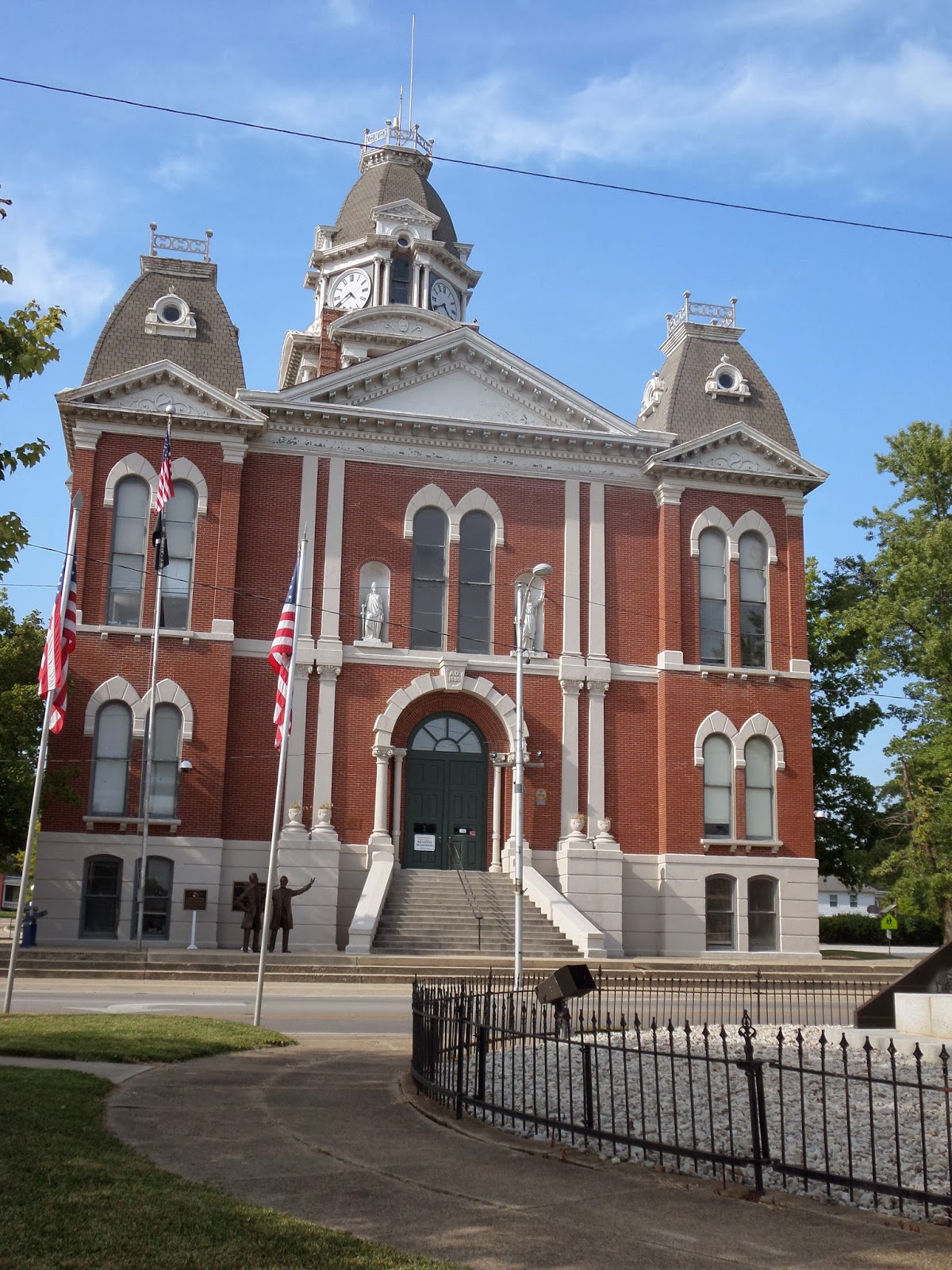 Then a close up on the statue to the left of the stairs..... 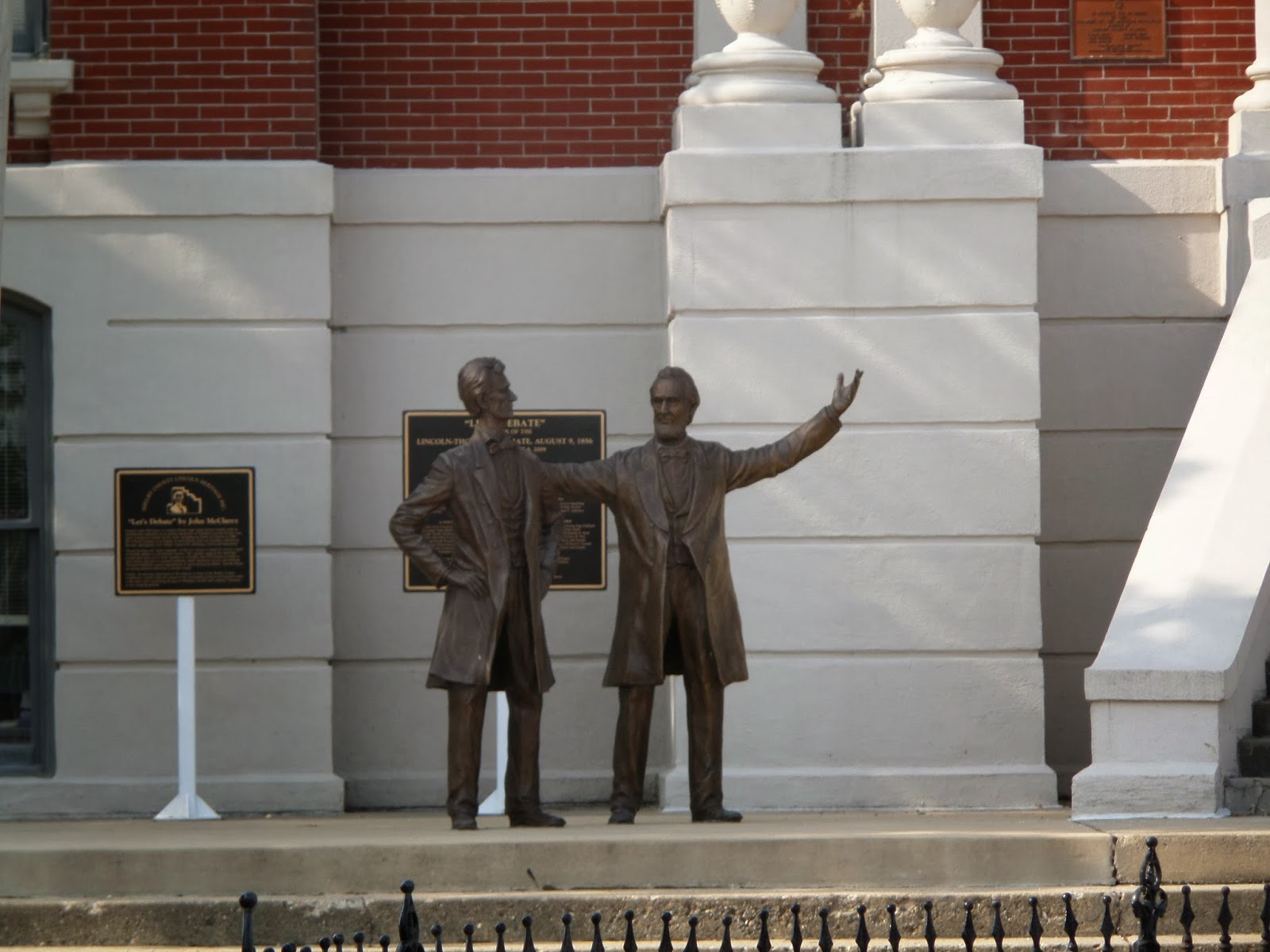 Gah!
Of course......Anthony Thornton with Abraham Lincoln debating some issue of the day.

And the Soldiers and Sailors Monument, erected in 1907, opposite the courthouse, dedicated to our fighting men..... 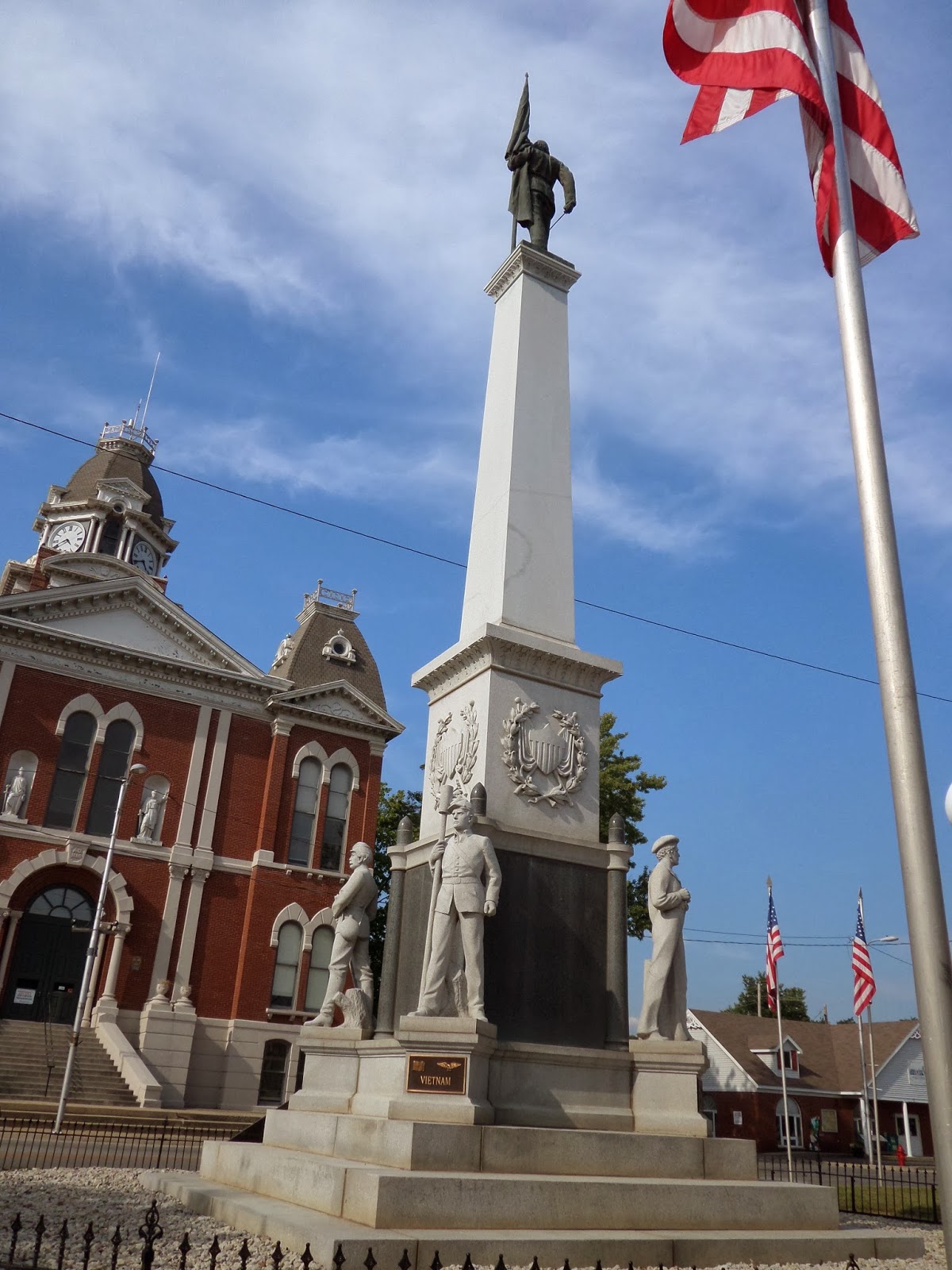 This monument is on Lincoln Square.
Lincoln practiced law in this town so blah blah blah....go figure.

A damned Yankee invader on the monument...... 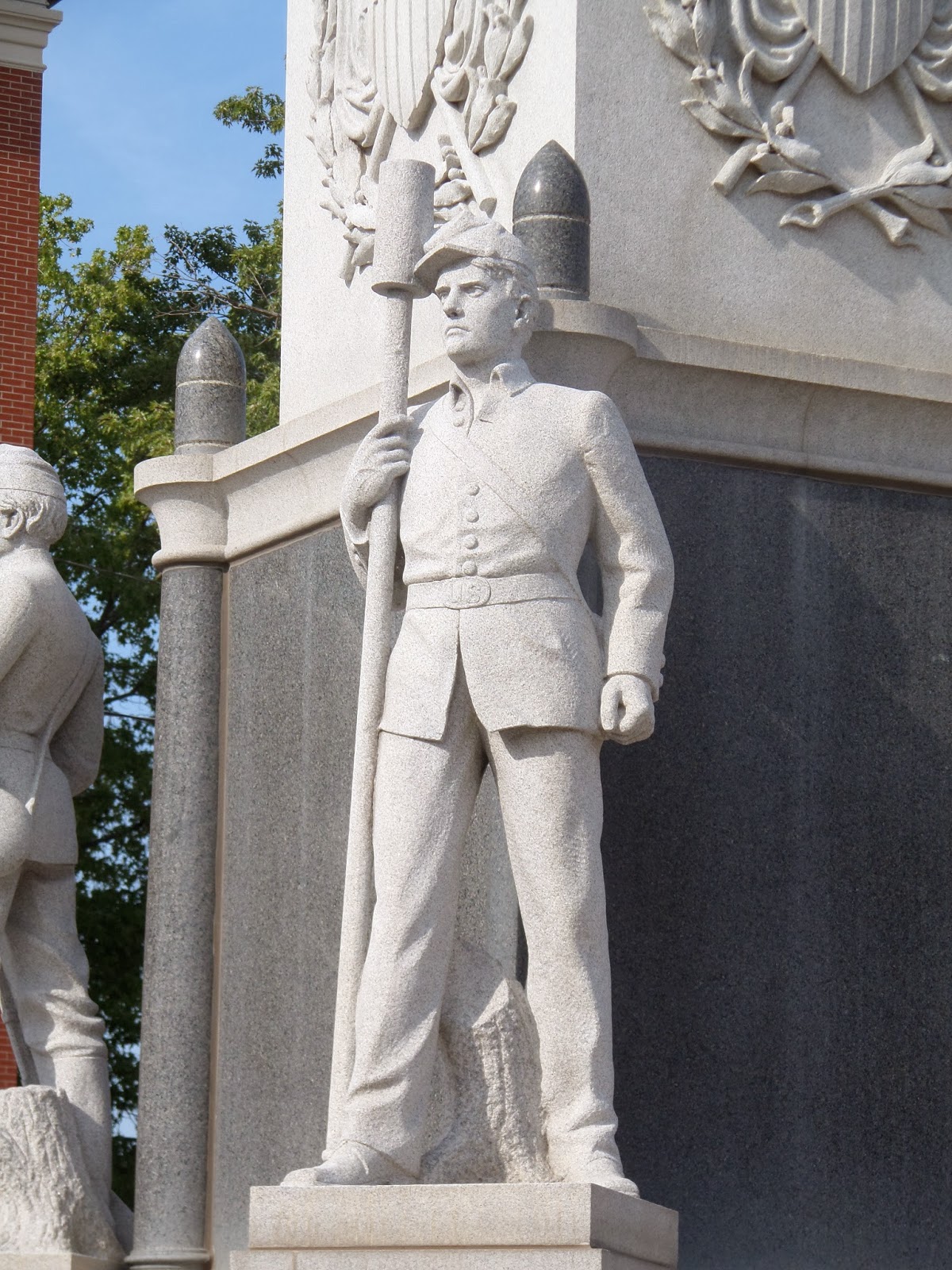 Then it was back in the car and the drive back to Mattoon.....

We were getting mighty hungry by now but resisted the urge to stop here on the way back...... 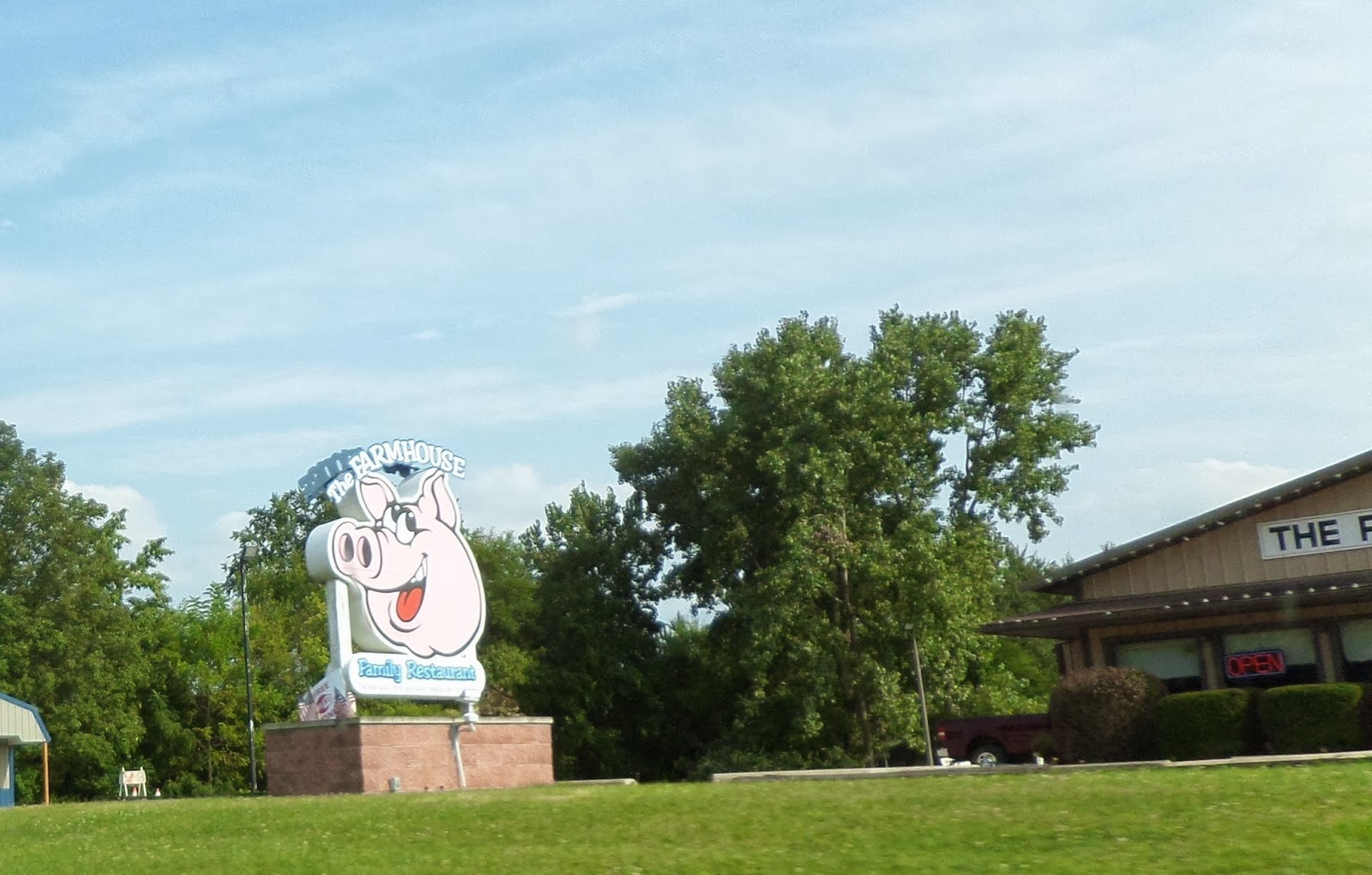 And then, near the turn off for the famous 2 Story Outhouse(read about it HERE ) which we didn't have enough time to go see, I spotted this signage..... 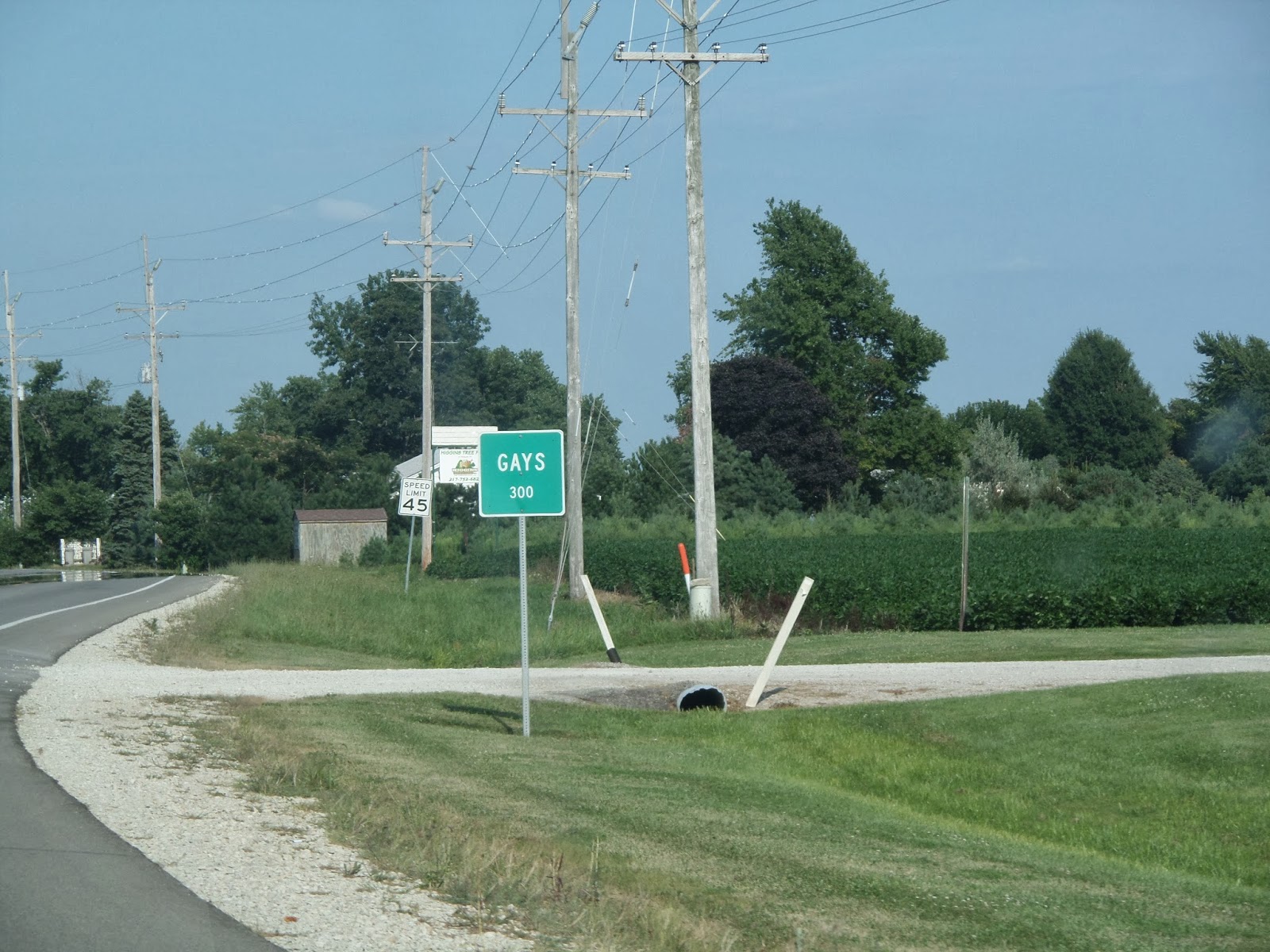 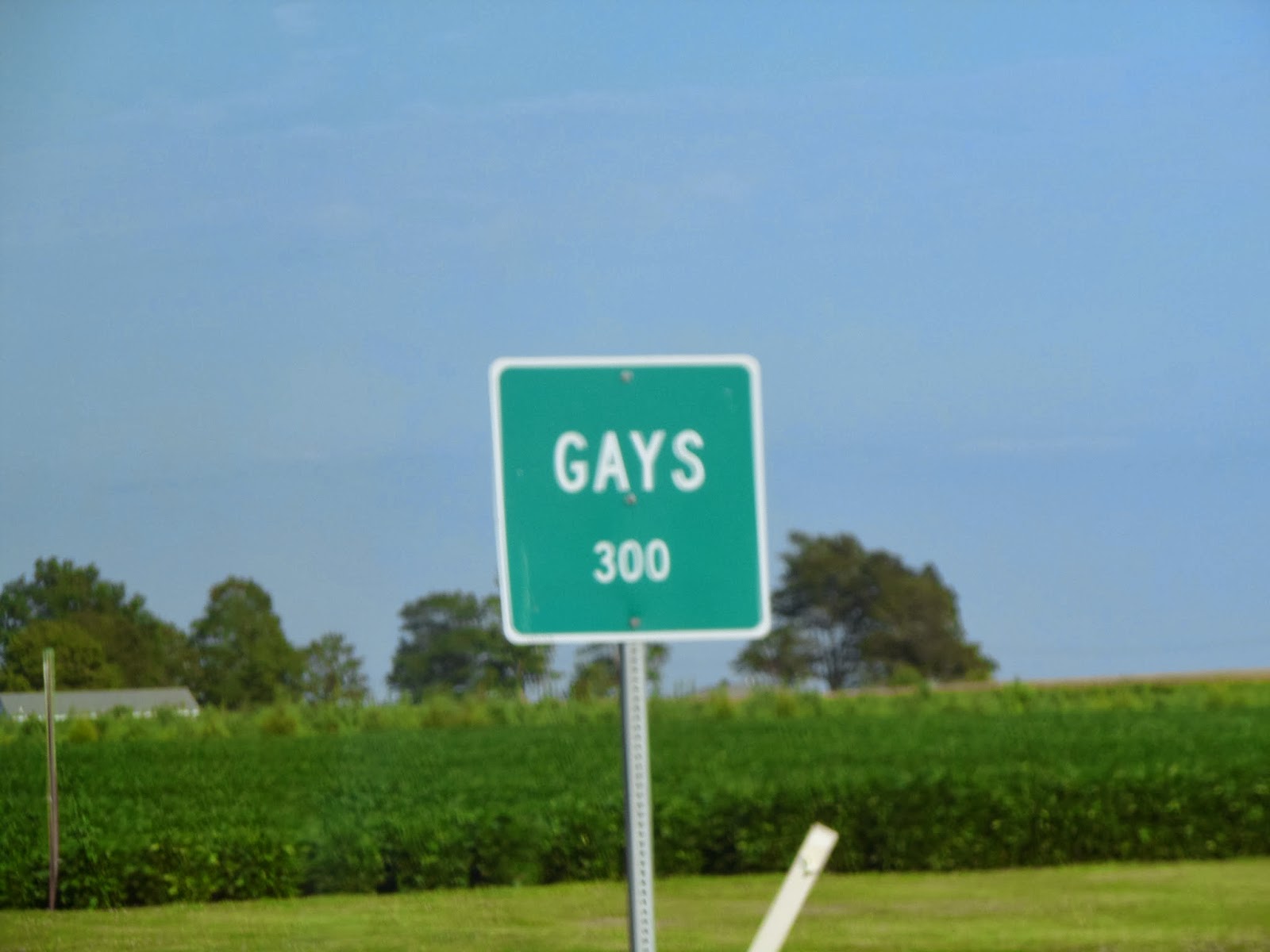 Finally we got almost to the reception hall and then we hit this..... 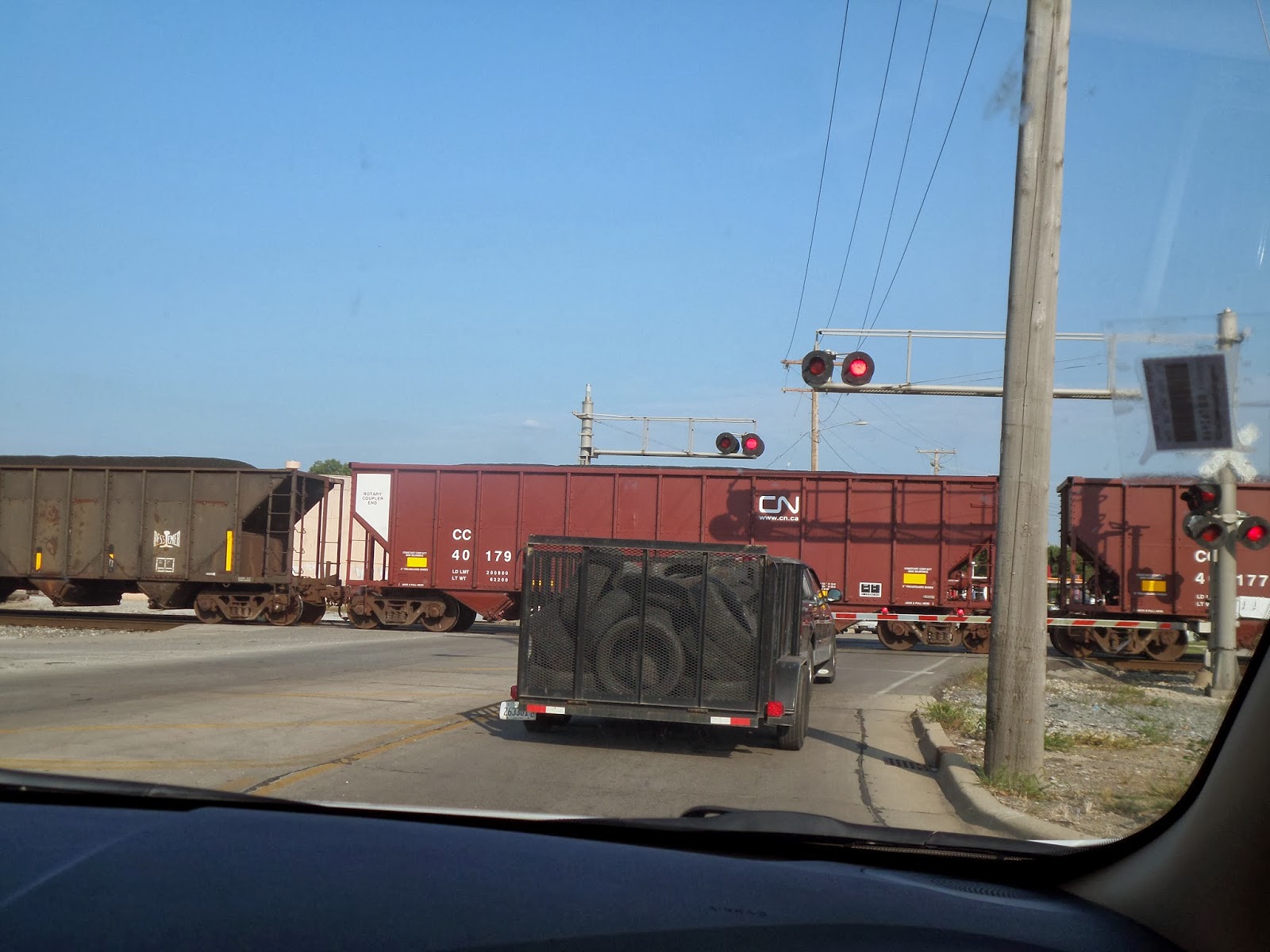 After sitting for pretty near 20 minutes the train cleared the intersection and we got to the reception about 10 minutes late. 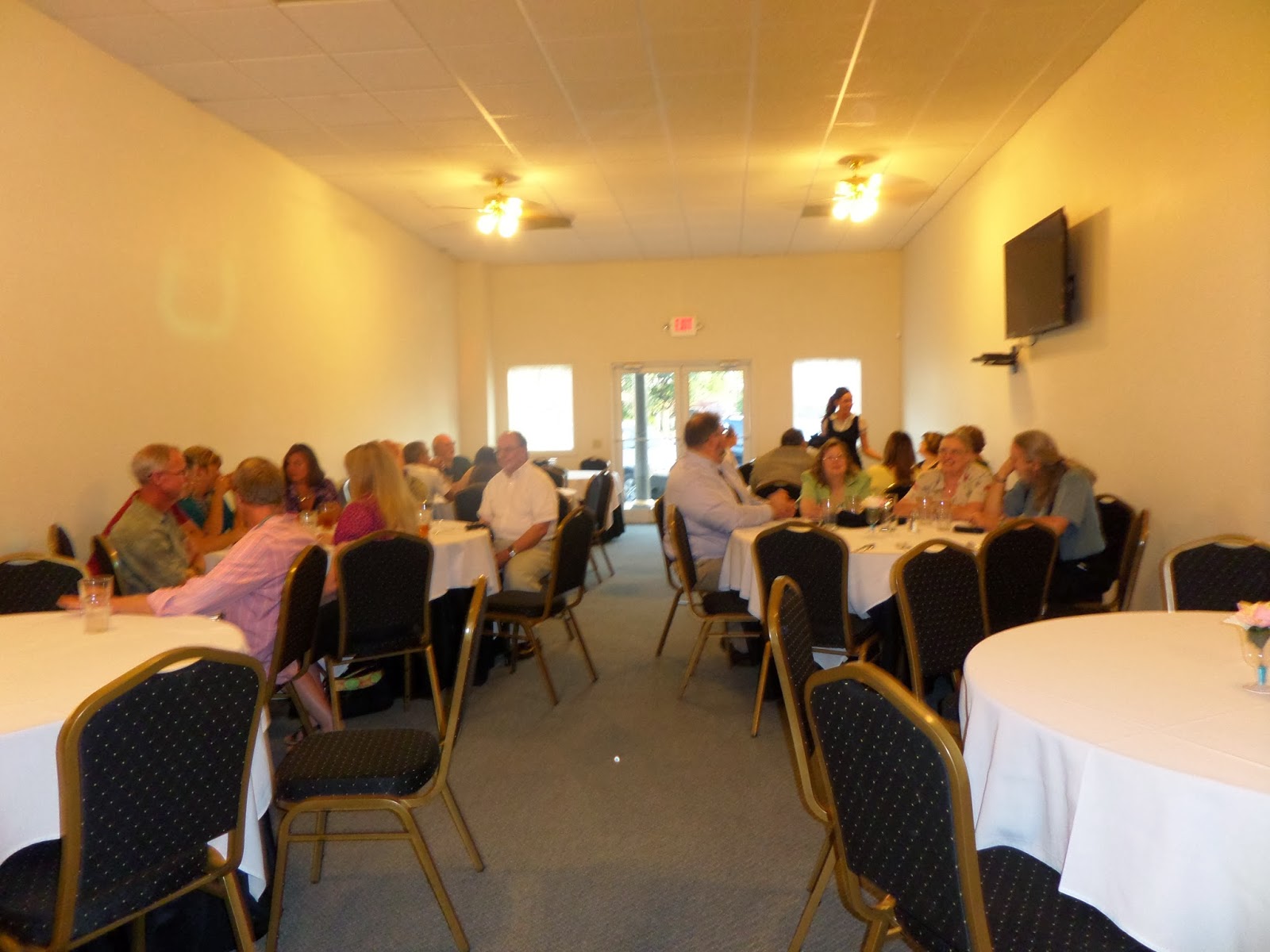 It was a nice little buffet style dinner.
But the best part were the cupcakes..... 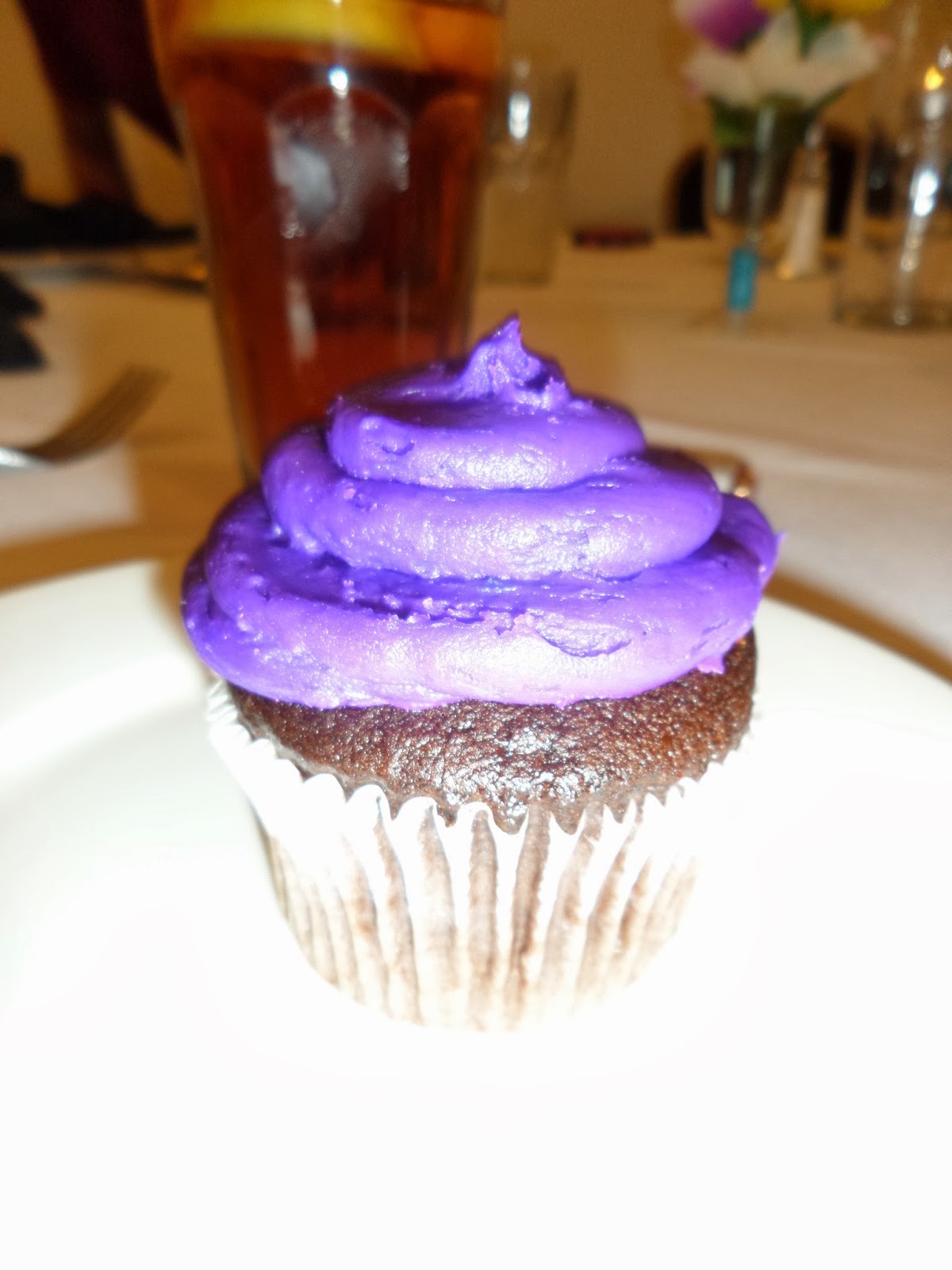 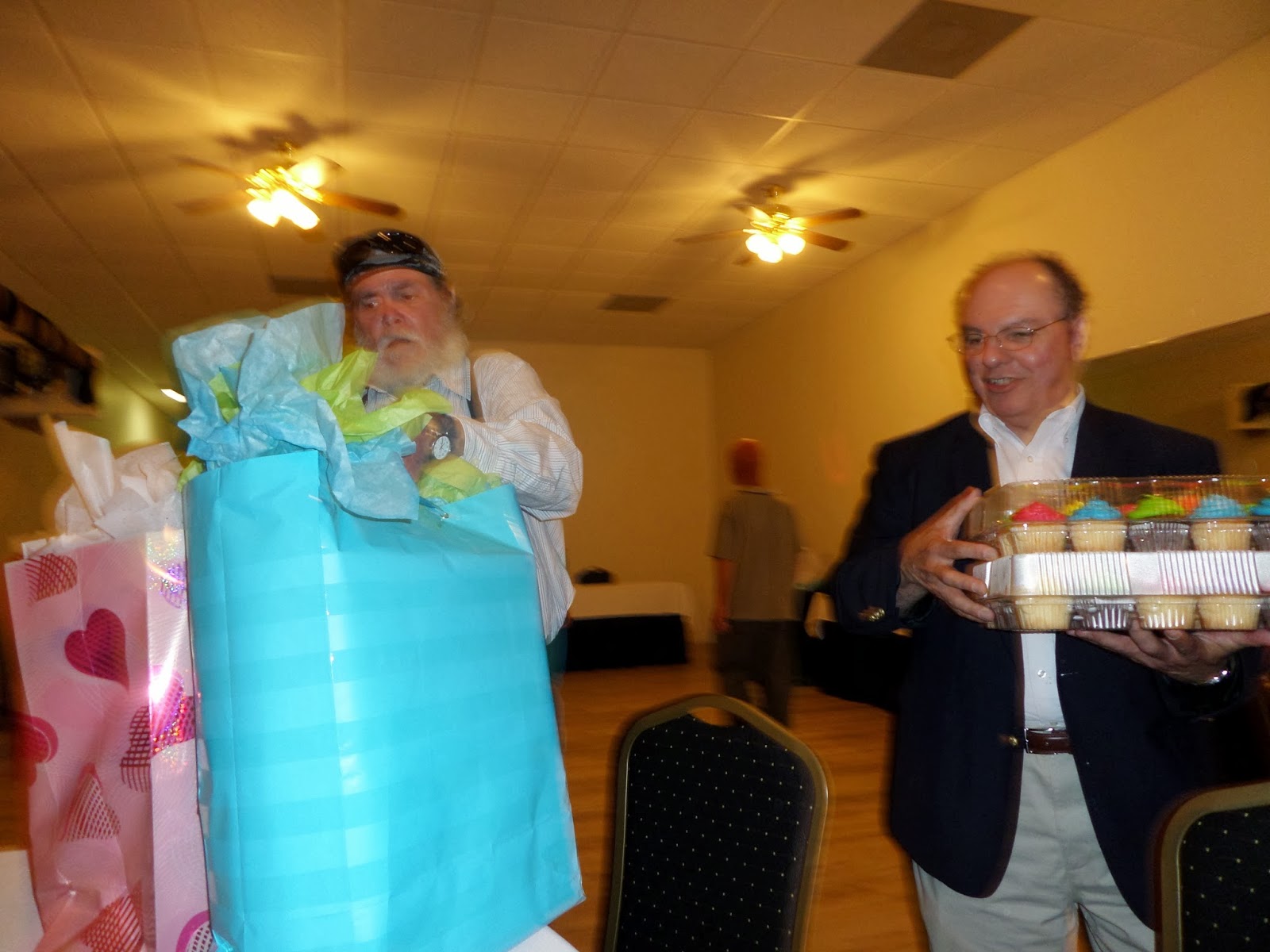 Then we packed up the gifts and took the new Mrs. & Mr. back to their house..... 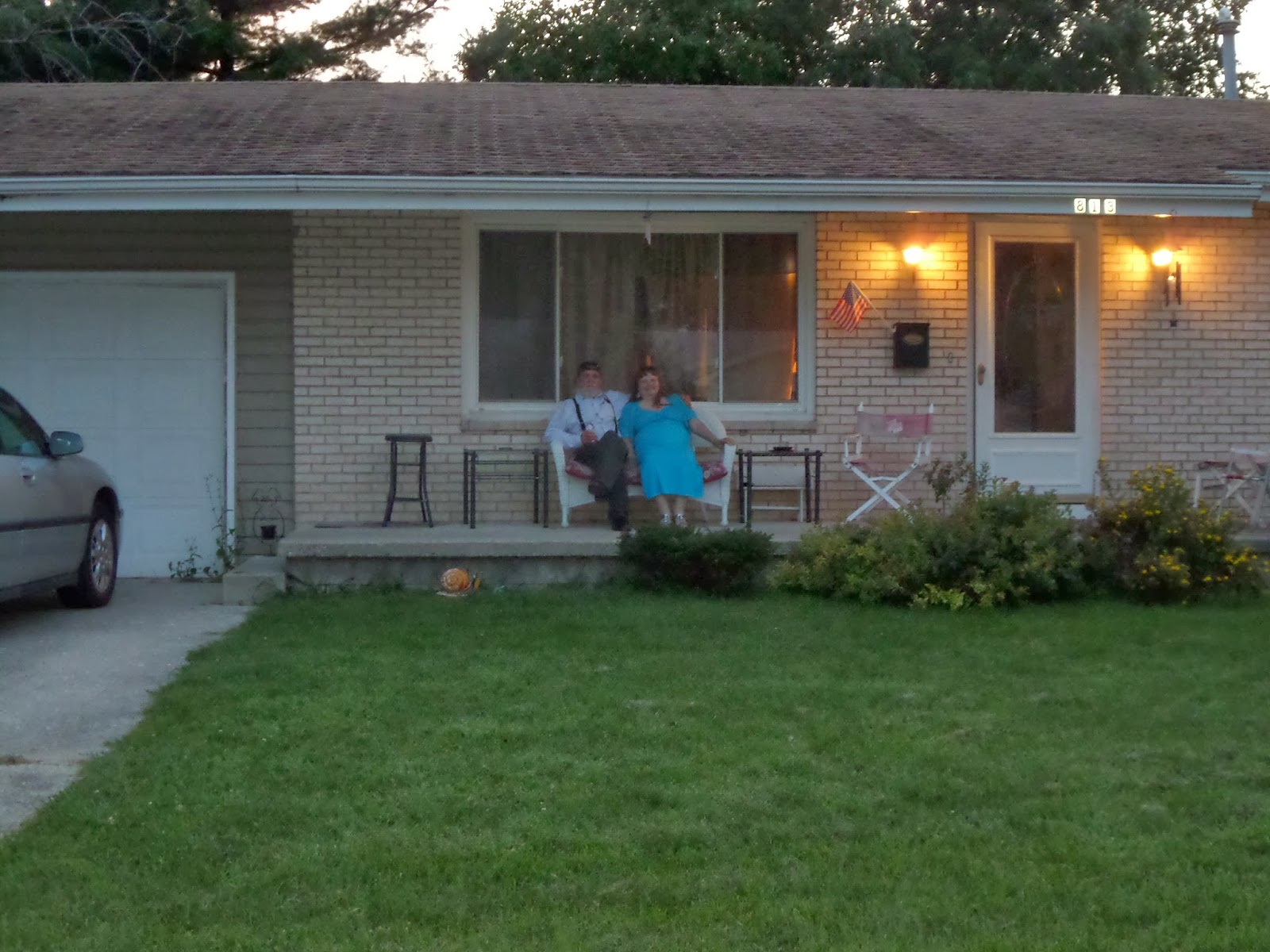 And we bid adieu to the Newlyweds.
Here's to many happy years ahead!