Lots of my online friends and bloggers I read are doing what is termed a "Fiscal Fast" or having a "No or Low Spend January". 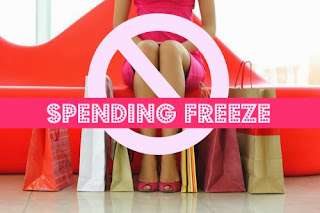 Since January comes after the biggest spending Holiday in the year(Christmas and/or Hanukkah)AND since January is also the beginning of the year and everyone talks about turning over a new leaf/changing their bad habits, it makes sense to want to tighten up on the old purse strings for a bit.

What doesn't make sense is to do one of these challenges and then go back to wonton shopping once it's over or to stock up crazy amounts of items right before the Fast/Challenge before you have to stop spending so you can make it to the end of the time frame you have chosen.

I guess doing one of these challenges gets you into a better mental state in regards to money but does it really affect your bottom line for the year?

If you spend more before a challenge in order to make it through one, aren't you just spending the money you would have spent during the time when you aren't spending?
If you go without during a challenge and then go out and buy the things you denied yourself for that time period when it's over, how is that reducing your spending over the long haul?
In my mind, it's just moving when you spend/what you spend around in time.

What you need to do more than one of these challenges is to examine your habits and change the ones that are making you spend too much $.

Changing what you expect in life in regards to "things, consumables and experiences" and then where and how much you spend your money on them is the REAL challenge.

That or finding a way to make more money if you don't bring in enough to satisfy your needs and wants.

Perhaps changing your spending(or rather delaying your spending)for a week or month CAN lead you to develop new money habits, which is what you really want.......better habits about money.

But I find that, unless you put Christmas spending on a credit card and are wary of the impending delivery in January of a c/c bill, January may Not be the best time to avoid spending money.

You can find some good deals after the Holidays so it might be a real good time to spend some extra money to stock up on things you need now rather than later.

Who hasn't gone to Target or some other store after Christmas to buy some clearance Holiday items?  Along with all the décor and gift wrapping stuff on deep discount, there are food and paper products(either with Holiday colors or themes or specialty foods only carried for the Winter holidays)and you can get them now to put away for use later or use now.  Personally, if I can get Christmas toilet paper for 1/2 of what I pay for plain old white toilet paper in January, I'll use it in February to October or whenever it runs out. ;-)

An if you have kids, there are clothing and toy deals to be had too!
Why, I spent a few minutes on New Year's Day buying some Christmas presents for 2014.
So do you think I am crazy for doing this?

Crazy like a fox is more like it.
The store in question only has a storewide clearance sale this week plus I had a $X off $XX coupon I could use, so I'd be crazy not to buy it now for half or more off what they will charge me come next November.  I don't go nuts buying Xmas presents ahead but do buy if I know I can use it and I have the space to store it until next Winter....and most importantly, I have the money to afford it now.

So I'm spending $30 in January instead of spending $65 in November.  If I were to save that $30 in an investment instrument for 10 months instead, would it grow to $65 by November?  No way.
Financially it makes more sense for me to spend it now.

So the best of luck to all of you during your no-spending challenge!
I hope it goes well and gets you to really re-examine how you handle your money because that's the only lasting goal if you really think about it.

Email ThisBlogThis!Share to TwitterShare to FacebookShare to Pinterest
Labels: spending fasts don't work long term without changing how you think about money, taking advantage of money deals even in January, temporary spending freezes don't change your habits with money