Subtitled......"Liquor, Indians but no Guns"

We hit the road early on Day Seven, leaving Nashville TN in the rear view mirror. 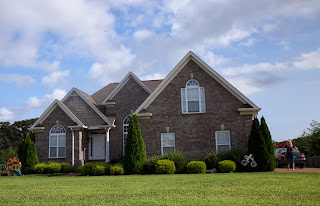 We passed this truck on the interstate later that morning and Hubs wished we had a hose so we could have tapped into that load! 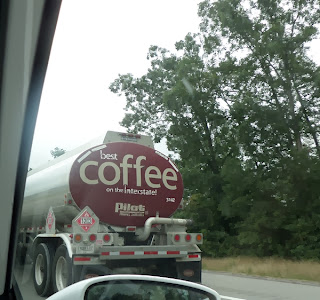 We made a pit stop here, about half way to our first adventure of the day...... 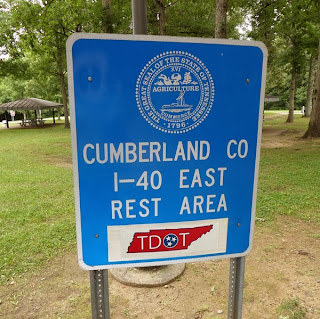 And later on, we made another pit stop here......Bootlegger's Liquor Store....which turned out to be an adventure in itself. 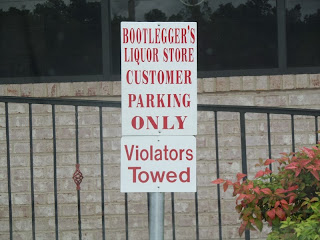 That liquor store was right next door to a motel....and it was an AWESOME one.  I think I have found our new "go to" motel when we are in this part of the world again.

While we were in Tennessee, Hubs "discovered" a love for whiskey.  He has had bourbon before but he was able to get his hands on TN whiskey, which is different and not widely sold outside of the state.
All bourbon is whiskey but not all whiskey is bourbon.  Here's a Maker's Mark Bourbon info graphic HERE that explains it more fully.
Tennessee whiskey(spelled with an e)is a different animal from what most people call whisky.  It is made in smaller batches and not much available outside of the state.
At Bootlegger's Hubs discovered his special purpose in life......to be a drinker of DICKEL, George Dickel Whiskey.

They are the unknown cousin of Jack Daniel's.  Their motto is, "If you know Jack, you don't know Dickel."
Hubs stocked himself up on a bottle of each variety of George's elixir.
I also bought a bottle of something you can't get other places.....a bottle of this..... 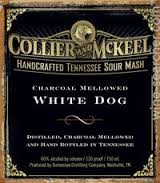 Collier and McKeel White Dog.
Basically, white dog is the closest you can get to drinking moonshine(aka corn likker)without knowing some hillbilly making and running "shine" out of some back holler.  It's moonshine that revenoor taxes have been paid on.

White Dog is the nickname for any corn mash whiskey BEFORE it has been aged into what most people call whiskey or whisky.  It's "young whiskey" and can be quite "rough".

But enough of our whiskey lesson for today, let's move on, shall we?

More shots from the road as we got further east...... 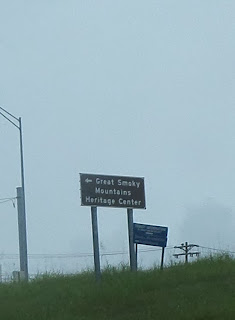 And if anyone had any doubts, KUDZU is alive and doing quite well, thank you!, in eastern Tennessee..... 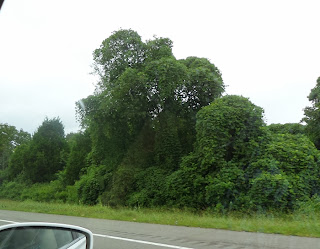 And somewhere near Knoxville, we finally arrived at our adventure for the day......the Sequoyah Birthplace Museum..... 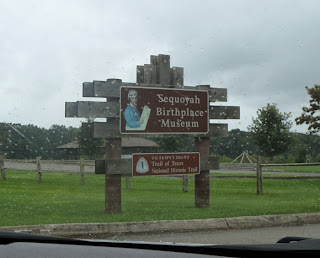 You can go read about Sequoyah HERE. 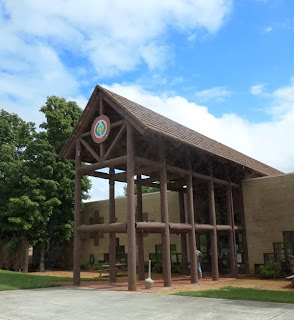 The Museum is owned and run by the Cherokee Nation(Eastern Band). 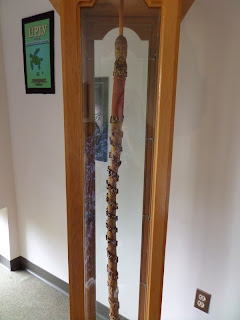 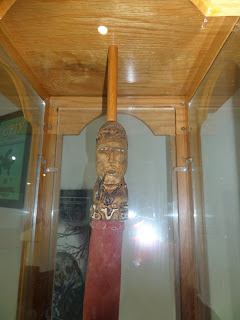 It contains Cherokee artifacts, artwork(like this carved walking stick), films and dioramas on the lands and peoples of this area through the ages and also the history of the "Principal People" as the Cherokee call themselves, along with the history of Sequoyah himself and his great Cherokee Syllabary. 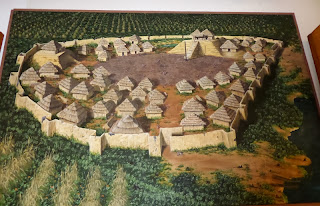 Many people call Sequoyah's invention an alphabet but it isn't.  Instead of 26 characters, there are 85 and each character isn't a letter, but a symbol representing each sound of the Cherokee language. 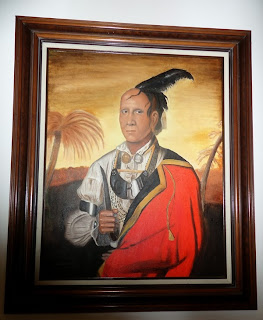 It takes longer to memorize 85 symbols/sounds than our English 26 letter alphabet, but once mastered, the learner can begin to read and write immediately, unlike an English alphabet learner, who must then learn how to put the letters/sounds together to make words.
It's an ingenious device if you think about it!  Sequoyah worked fulltime on this Syllabary for a year.  His neighbors thought he had gone mad as he neglected his garden and his wife thought it was witchcraft and burned some of his work. 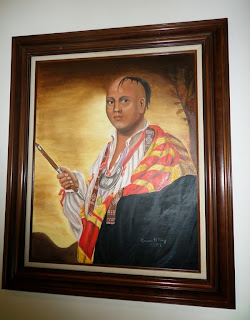 After it's development, Sequoyah spent 12 years promoting his invention among his people.  Once Sequoyah won over various bands of his Cherokee peoples, and the nation embraced his writing system as it's own, it put the myth about the uneducated, godless savage to an end once and for all.  Knowledge is power and it helped to put the Principal People on equal footing with all those European and English people who were slowly taking over their lands....at least for a little while. 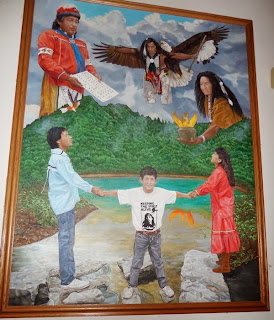 There are also displays in he Museum about the interaction of the "white man" with the native peoples and once you get into the 1800's the history gets quite depressing.....all that "You help me, then I stab you in the back(sometimes literally), and I push you off your land and take over".....and we all know how "things" turned out for the Native Americans. 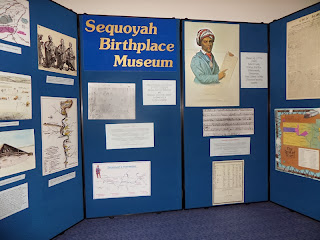 Sequoyah was a very interesting, multifaceted man and he treasured the great honors bestowed upon him for his Syllabary invention.  He is said to have worn a silver medal awarded to him by the Cherokee Nation always, even after his death.

He was instrumental in the 1st bi-lingual newspaper in the US, the "Cherokee Phoenix", which began publishing in 1828 until 1834. 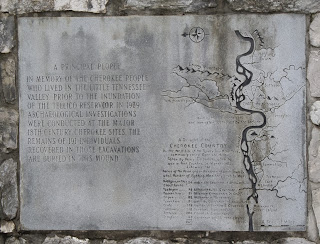 Sequoyah was a successful blacksmith too.  Here is a recreation of his shop on the Museum grounds..... 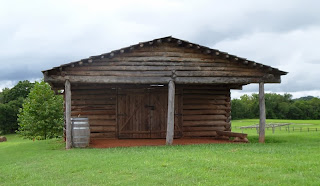 And a typical Meeting Place(without the covering over it).  It's not quite as large as they believe these actually were back in the day.  These structures were communal gathering and marketplaces for Cherokee band members and could hold about a 100 people.  (They served the purpose of our churches, theatres, community centers and shopping malls of today.) 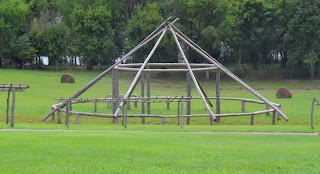 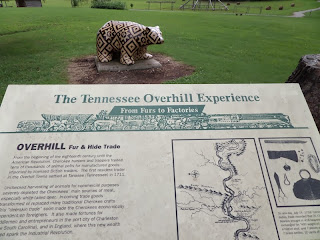 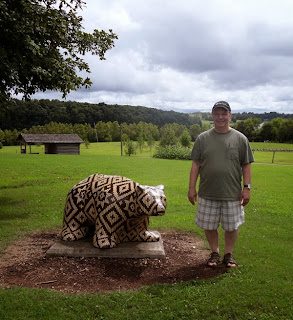 After we bid adieu to Sequoyah, we had to find some place for lunch as it was already after 3pm.
We stopped at this place in Vonore that we had passed on the way to the Museum....... 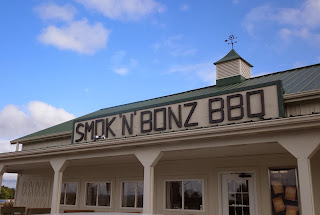 You know it's a good BBQ joint when they have a roll of paper towels on the table! 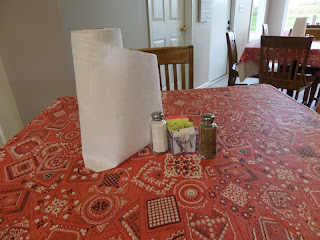 There was a nice view out the back windows but THIS is the view I wanted to see........ 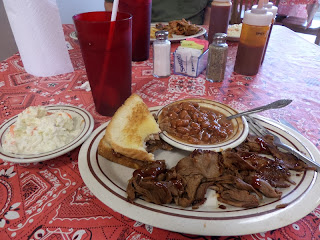 I got brisket, pork, coleslaw and pintos.  I used my grilled toast & coleslaw to make a barbecued pulled pork sammie.

After getting "cue happy" we hit the road again.
We had, what turned out to be a 5 hour drive up I-81 from Knoxville, TN to Wytheville, VA.
We hit rush hour somewhere, stopped at another liquor store before leaving TN and a potty break somewhere in there too.
It was dark once we got to Wytheville and tried to exit the Interstate to our motel for the night.
I said "tried" to exit the Interstate because this exit was temporarily closed in both directions going south or north.
VA DOT was going some highway repairs that evening and had closed the exits we needed to get off of until morning.
So we drove up to the next exit, straight up into the mountains about 10 miles....into the middle of nowhere.  No civilization, no lights and spotty cell phone reception.
Hubs parked off the exit and tried to call the motel to get directions to get there without using the interstate.

In between the dead spots, standing outside the car with your right arm up in the air and holding the phone in your left hand, while balancing on your left leg, the motel clerk actually told Hubs that she didn't know how to give him directions from anywhere but from the Interstate to that particular exit.

Really?!?
Another low point and milestone in civilization has been reached.
People can longer function without GPSs.
No one can has a sense of direction and can navigate in their heads.
Note to motel owners--Do not hire idiots who can't read a map or have no clue about the area in which they live!
You KNOW this moron lives in this town or nearby if they have a JOB there, and you KNOW they have to DRIVE ON THE ROADS to get to said job, but they have no CLUE about the names of the roads and how said roads hook up into each other?!
Really!!???

So we found a road heading south....which was the general direction we needed to be heading.....and we drove, and drove, and drove some more down a long windy, foggy(in the mountains at night, remember?)2 lane country road with no signs or markings except for a..... 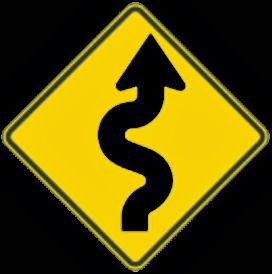 Ever so often.
We finally saw a light, the sign for a convenience store, so we pulled in, got some directions from the clerk....FINALLY!, someone who actually KNEW the names of the roads and where they led!!
Praise the Lord!

We found the motel shortly thereafter and rolled in about 9:30 at night.
We were both hungry but not starving since lunch had been so late.
And it's a good thing since the little town here rolls up the sidewalks at night evidently, as everything was closed except that convenience store we found.

Luckily, I still had a bag of food Sonya Ann had sent us off with on Friday....summer sausage slices, cheese, celery and cherry tomatoes.  I think there were crackers too. 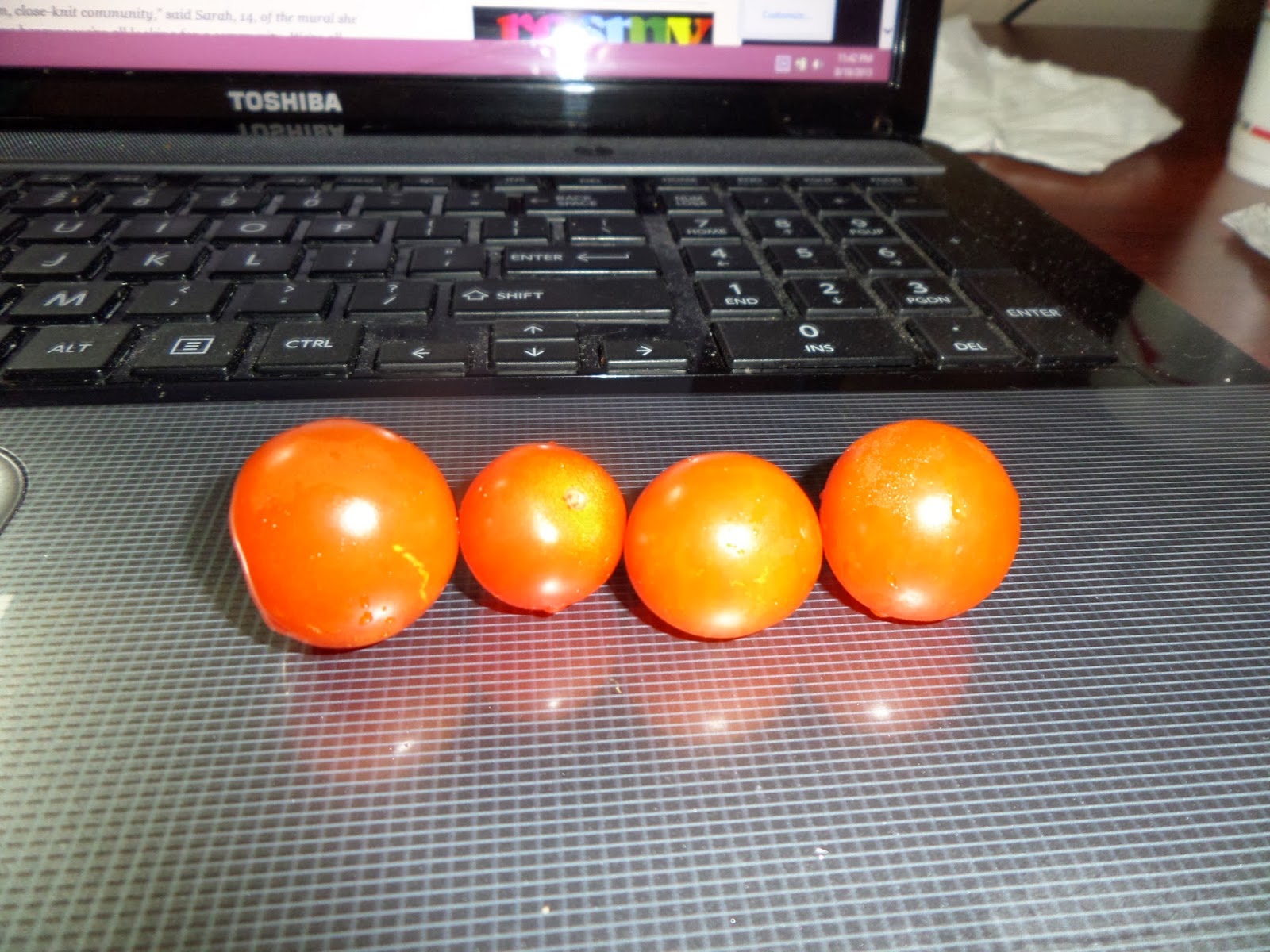 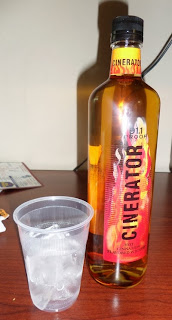 I fell(literally, I got dizzy after 2 shots of this stuff!)into bed to sleep the evening away.
Thus ends Day 7 of the Great Summer Road Trip of 2013.

Next time, Day 8..... wherein we eat local, dig some more roots, go back in time, up a mountain, and hit another of my "pleasure centers".