So here is  the TW3 report for Sluggy--

SUNDAY-got the storage emptied and cleaned.  Shoved more stuff into the garage, after transferring 90% of it to tubs out of cardboard boxes.  Disposed of the cardboard a la fire!  Feeling like something got accomplished.
Make a proper Sunday dinner of Pork Chops, Stuffing and Rot Kraut Mit Apfeln(otherwise known as Red Cabbage with Apples).   Hubs had eaten this Kraut dish in Pittsburgh at the Hofbrau Haus on our trip there and loved it so I tried my hand at it, successfully! 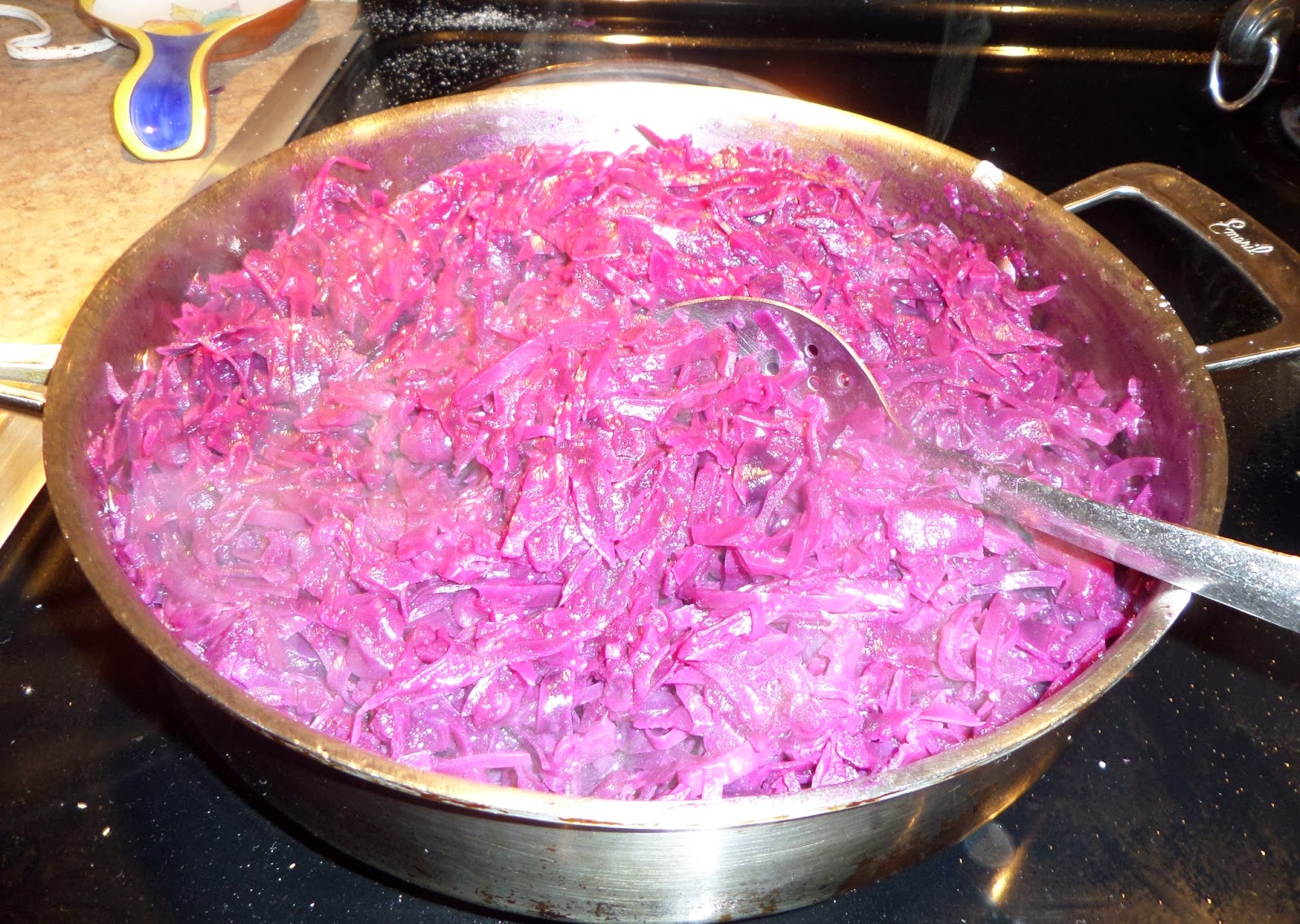 It did take longer to cook than the recipe said.  If you like sweet and sour type dishes, you will enjoy this. 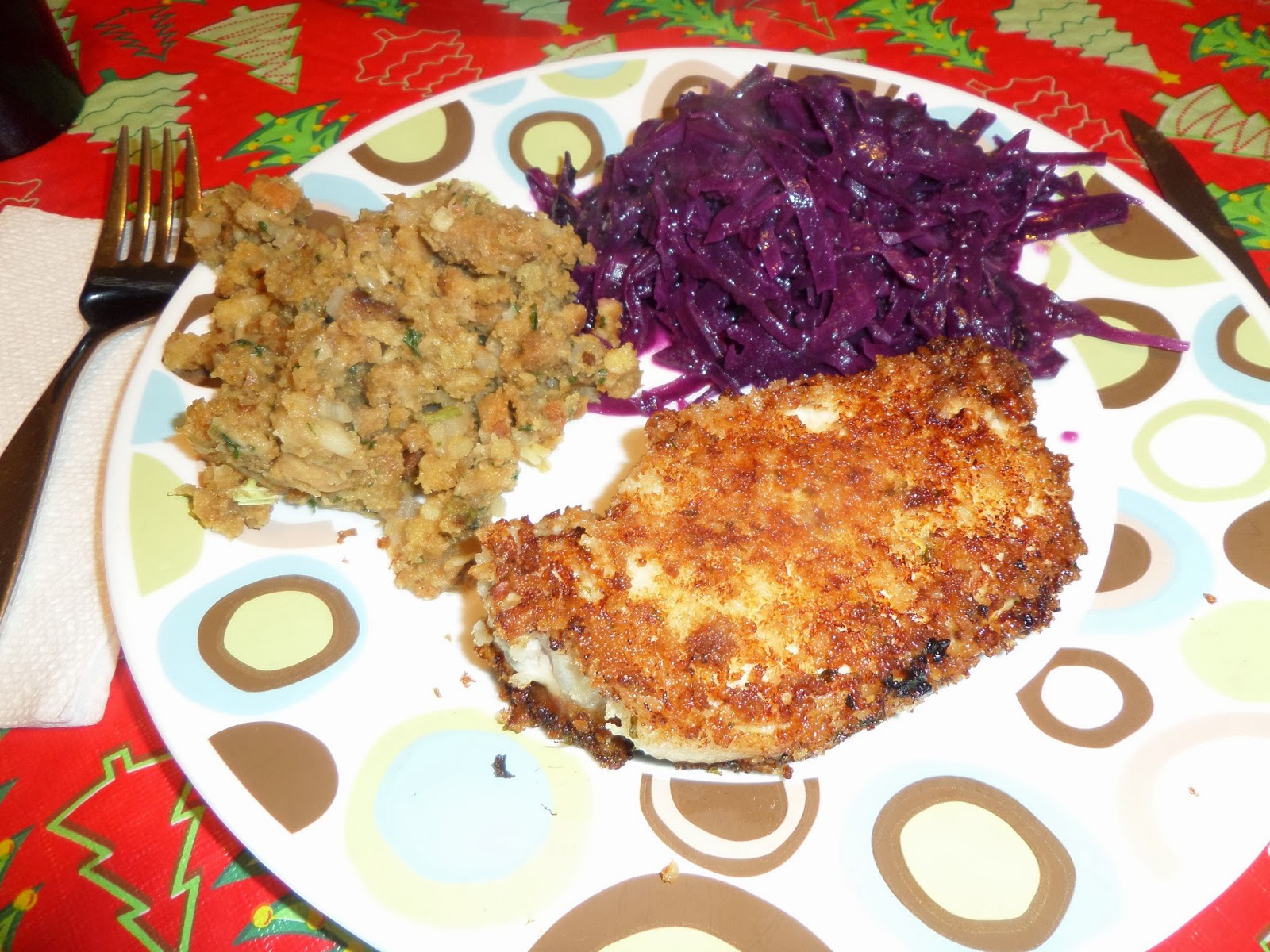 The recipe can be found HERE .  This recipe is from the Luchow's cookbook.  Luchow's was a landmark NYC German restaurant back in the day so this version should be pretty authentic.

MONDAY-I spent more time in the garage(as the weather was a bit milder that day), organizing all those now full tubs of stuff from storage, so we can locate things out there and aren't tripping over other things.  I cleaned up the kitchen that day as well....living the dream folks, living the dream!!! lolz

TUESDAY-Wrote the 1st installment of our Pittsburgh Christmas Trip and posted it.  Vacuumed the rug in the living room as the beagle has claimed it as her napping spot on sunny days, so she leaves tuffs of herself behind on it.  Between the dog hair and the vacuum not wanting to "roll" on that rug, I got my aerobic workout for the day.  ;-)

WEDNESDAY-Spent lovely hours on the phone sorting out our new medical coverage.  In the end not much was accomplished besides the acquisition of a nice headache and an elevated blood pressure.
Channeled my anger into ruthless cleaning of the desk and immediate area.

Also emptied 2 tubs of fabric and wrestled with it all to get it laid out for photographs.

In addition, I hit the grocery store, as Wednesday is my usual shopping day.  Spent a whole $25.57 for the week(no more grocery/toiletries shopping this week).  Got some ramen for #2 Son, lunchmeat, OJ, strawberries and a 10lb. turkey breast(I'll cook this Sunday and have leftovers for next week).

THURSDAY-Wrote another installment of the Summer Road Trip saga(to post later today).  Went out for a free Birthday meal at local Italian restaurant.  Also had a gift certificate for a medium pizza so Hubs and #2 son split that, which made for a cheap meal out.

Spent the evening assisting #2 Son organizing the getting of letters of recommendation Funfest he gets to perform on Friday(and Monday).  Being a music candidate not only does he have auditions to prepare for and participate in before he finds out what schools he is accepted into, he needs recs from music persons as well as the usual academic recs to file....and these have to be either on file or in hand at the audition dates.  He has NOT been successful pinning down these teachers/instructors so far and his 1st audition is Feb. 1 at Temple(big school in Philly), followed by Feb. 3 at Mansfield U(state school in the boonies), Feb. 15 at VCU(out of state school in Richmond, VA)and Feb. 21 at Marywood U(private local college).
He hadn't even printed out the forms some of them require recs to fill out!  So we got that all done and I addressed envelopes and stamped them all so the rec person just has to fill out a form(or write a letter on school letterhead), drop it into an envie, seal it up and drop it into the mail.  I told him to make it as easy as possible for them since they probably have been pestered by leagues of students for the exact same item.

I really don't know why schools insist that artistic types jump through so many more hoops and keep it all straight when it comes to getting into college......come on!  These are for the most part scatterbrained individuals due to their being right-side brain dominant plus they are all suffering from TEEN BRAIN so it's like nailing down Jello to get them organized. lolz
All this bureaucratic folderal for the great honor of overpaying for a musical degree which will leave the majority of them mostly unemployable at a living wage upon graduation because you KNOW who much our culture values the Arts, don't you?
Good times!

FRIDAY-First thing, I got to deal with an angry eBay customers in the UK.  She's not happy about the import duty her government charged her for the toy I sent to her.  I don't falsify customs forms like some do on eBay and if she wanted me to lie then she should have asked for me to do so, so I could have cancelled the transaction then and there.  Don't blame me because you live in a country with protectionist rules....
Who needs this crap?!

Packed up and put in the mailbox an Etsy order.
Speaking of Etsy, I also sort of made about 40 new listings there for items to sell this week.  They are in draft still since the PO rates are going up a week from this coming Monday, so I'll wait until then to launch them with the new rates.  Better to wait than to launch them now and then have to go back into them and edit all the rates on the 26th.....less work this way.

I might work on my genealogy stuff today as I got an inquiry this week from someone who just got their DNA matches on FamilyTreeDNA this week, and I match some of their genetic material.  Now we get the great fun of figuring out HOW we are related! 8-)

So that's the highlights(or lowlights)of my week.
What's happening in your world and what's on tap for today?

Sluggy
Posted by slugmama at 10:27 AM