Sunday morning we worked our way through the motel maze(like a couple of rats, no doubt)and found the on-site restaurant, which was where they provided the free breakfast to their overnight guests.
The place was a literal clusterfuck of humanity!
I don't know if it was because of the Holiday/Winter Break/Weekend or just that everyone in the motel decided to come to breakfast at exactly the same time, but it was standing room only.
I found a seat at the restaurant's bar while Hubs navigated through the sea of people to see what the foods available were and to locate the coffee.

I didn't sit at the bar for long because it was a slanted seat and I kept sliding off!  I was hanging onto the bar for dear life rather than tumble onto the floor.  As I hung there I kept scanning the room for a vacant table, clean OR dirty, I didn't much care at the moment.

As soon as I saw people get up and start heading for the door, I started to make my way over before someone else grabbed the space.
Hubs reported in what was available and then brought me over a plate and was off again to get him some provisions.  By the time he returned I was done eating so I watched local news while he noshed away.

After we got back to the room, we got ourselves ready to leave for our son's apartment, then headed out the door.

I got a good look at his neighborhood for the first time in the daylight this time.
Here's a house decorated tastefully for the Season....... 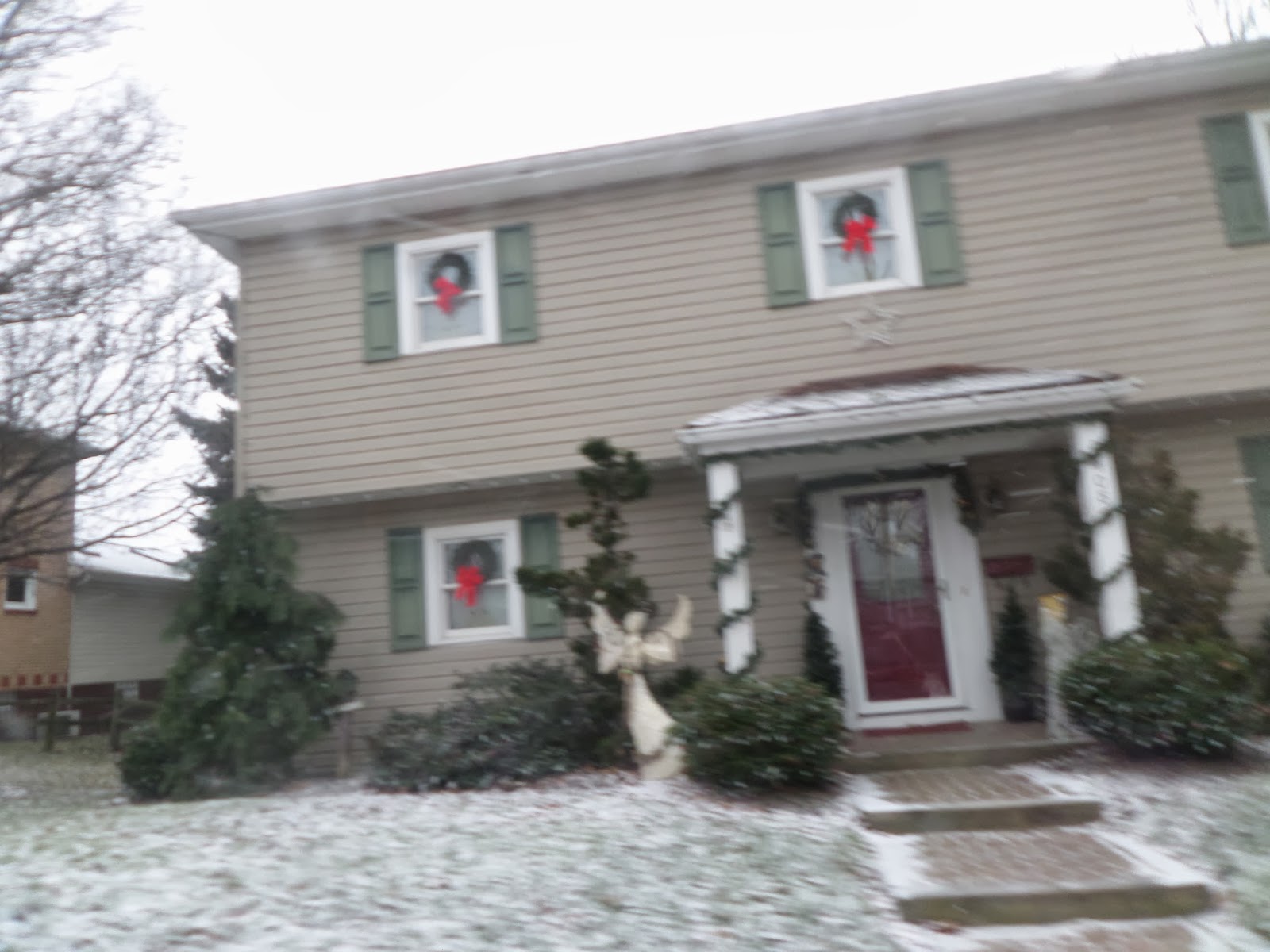 And here is another house in his neighborhood.......sorry for the bad photo but it was raining..... 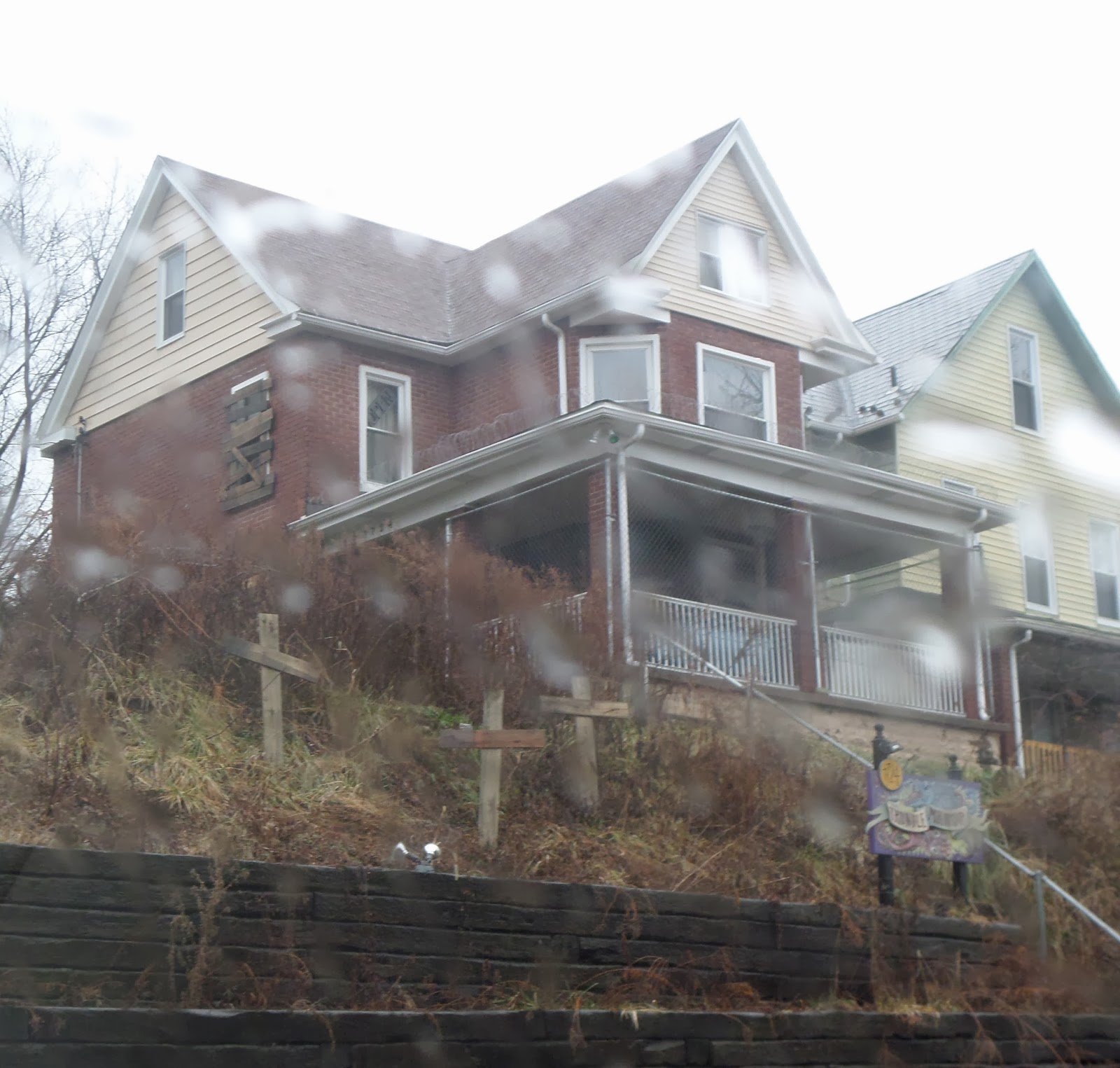 WTF?!?!
Wooden crosses in the front yard(isn't Halloween over??) and ya see that upper side window, how it's boarded up, overdramatically, like a house out of an amusement park or something?! 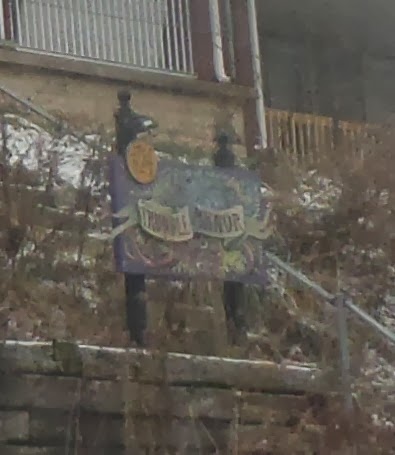 It says, "Trundle Manor".   And this link HERE will explain what this is.....sort of.

So not only do I find that the friends I visit are related to me but I sure do trip over "interesting" sites, do I not? lolz

And no, though having a Zombie Dinner Party there was tempting, we resisted the urge.

Moving right along.......
We picked up #1 Son and his SO and headed out to see some "hopefully" less macabre sights that day.
Since it was raining all day long, we decided to do some indoors activities. 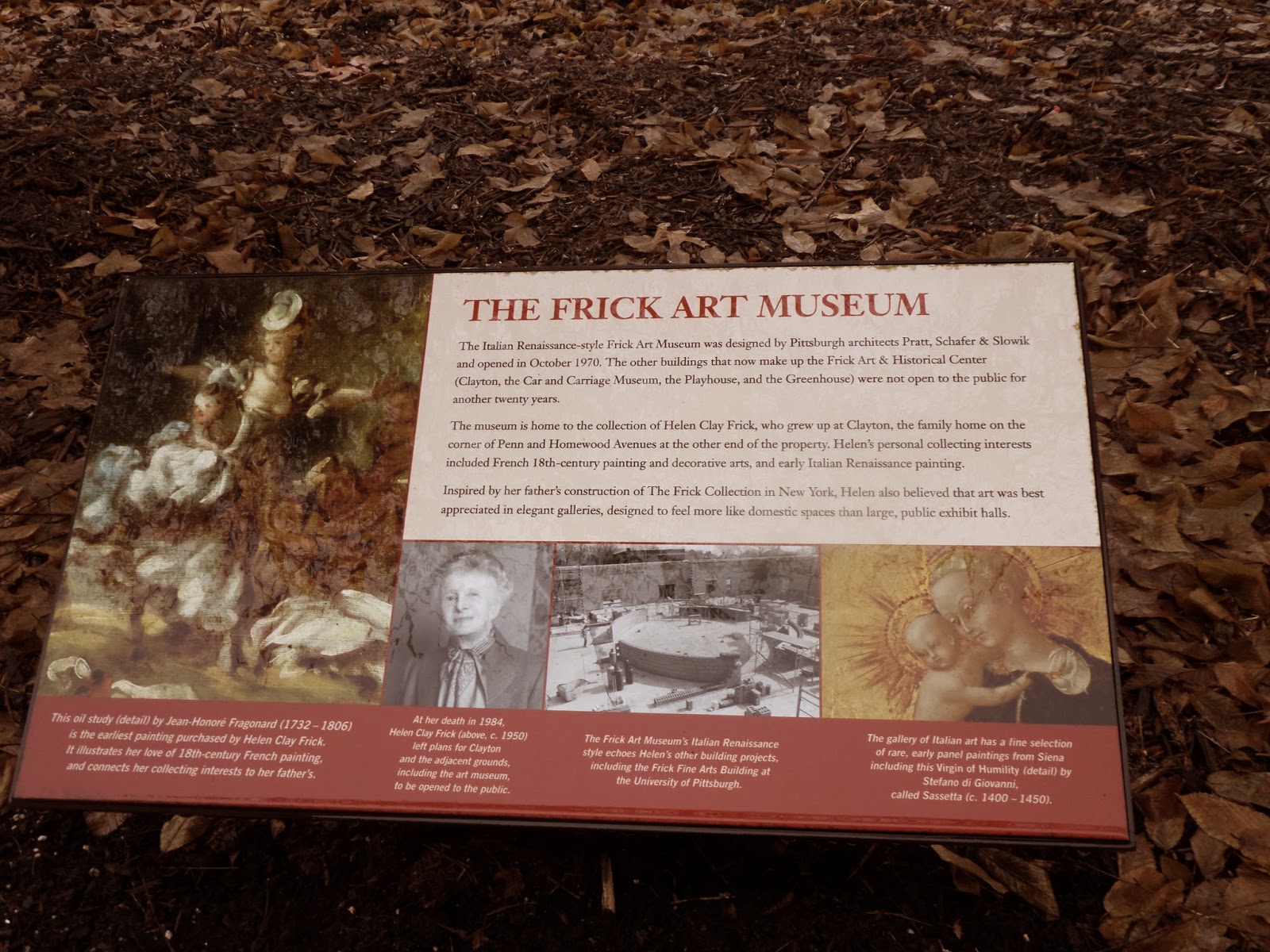 Named for one of the robber barons and industrialists of the Great Steel Age, Henry Clay Frick.
Frick had been Andrew Carnegie's business partner and when Carnegie went on an extended trip to Scotland, Frick was in charge of Carnegie Steel and disastrously handled the labor union strike in 1892, which became known as the Homestead Strike, by bringing in armed Pinkerton agents to "neutralize" the striking workers by any means necessary.  He was also among the wealthy and elite members of the group responsible for causing the Johnstown Flood.  At one time he was known as the "most hated man in American".
What a guy, huh?

He also helped found what became known as US Steel and was a prolific Art Collector.
His daughter, Helen Clay Frick, followed in her father's footsteps as an art lover/collector.
When he died in 1919, she inherited 38 million dollars and became at that time, the richest woman in America.  She never married and devoted her life to defending the name and reputation of her father, performing philanthropy and collecting art. 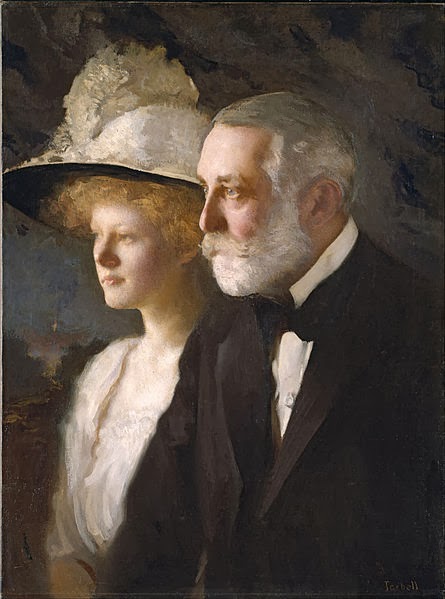 In 1970 the Frick Art Museum was opened on the family's Pittsburgh estate grounds.  It contains part of both Helen's and Henry's art collections.  There is another Frick Collection in Henry's NYC mansion on 5th Ave. & 70th St. in Manhattan.

Interestingly, Henry Frick and his wife Adelaide Childs Frick had tickets to travel on the inaugural voyage of the HMS Titanic, but missed the sailing, due to Adelaide spraining her ankle and having to remain in Italy.   This was years after Frick survived an assassination attempt too.  The man had him some luck. ;-)

Anyway, since #1 Son & Hubs are history lovers and I am an art lover, we went to the Frickin' Museum.  Son's GF wasn't too thrilled to be there but she is a jolly good sport for putting up with it.
It's a good thing there were benches inside to lounge upon while she was bored.

They had an eclectic mix of periods and media and were highlighting an exhibit of War Between the States Era Newspaper Drawings and Stories(aka Yankee yellow rag journalism propaganda).  I sputtered and muttered through those galleries without assaulting anyone thankfully. 8-P 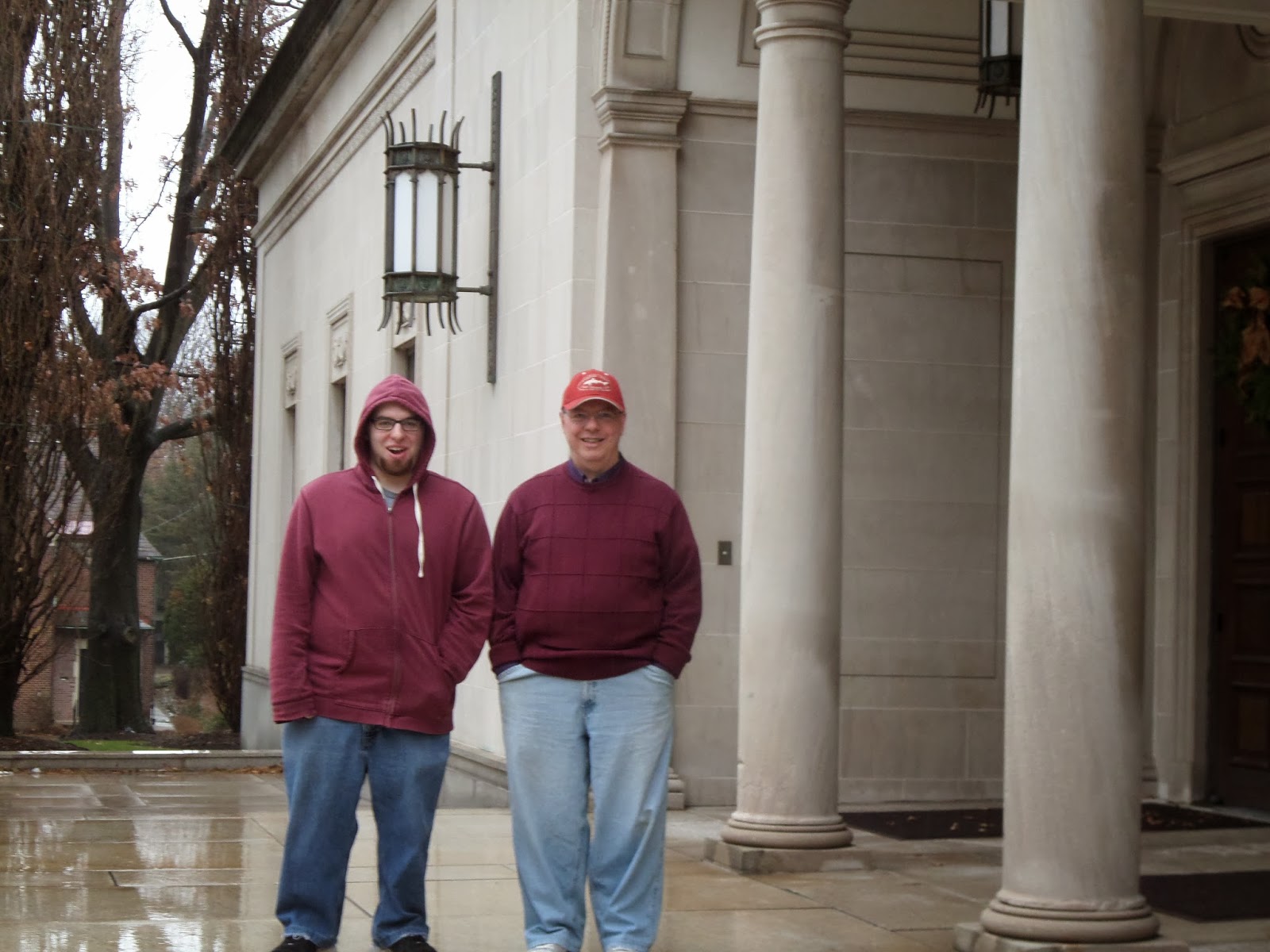 Hubs and #1 Son in the rain posing for a FRICKin' photo.

For additional information on the Frick Museum go HERE.

I was disappointed because I had wanted to tour CLAYTON.
Clayton is the name of the family mansion in Pittsburgh that has been restored and opened to the public on the Frick grounds.
When Henry moved his family from Pittsburgh to Manhattan in 1905(because his business concerns had shifted to that locale), they left nearly everything in the house as it had been used by the family and didn't pack it up for the move to NY.
After Helen Frick, who had returned in the 1980's to live her days out at Clayton, died, everything remained in the house.  So the house has been restored and is furnished with the original items and furniture from the Frick family as if they have just stepped out for the day.

But alas, you have to book to tour the mansion ahead and they were filled up that day, being a holiday week and all.

The best I could do is get some shots of the outside as we left the estate..... 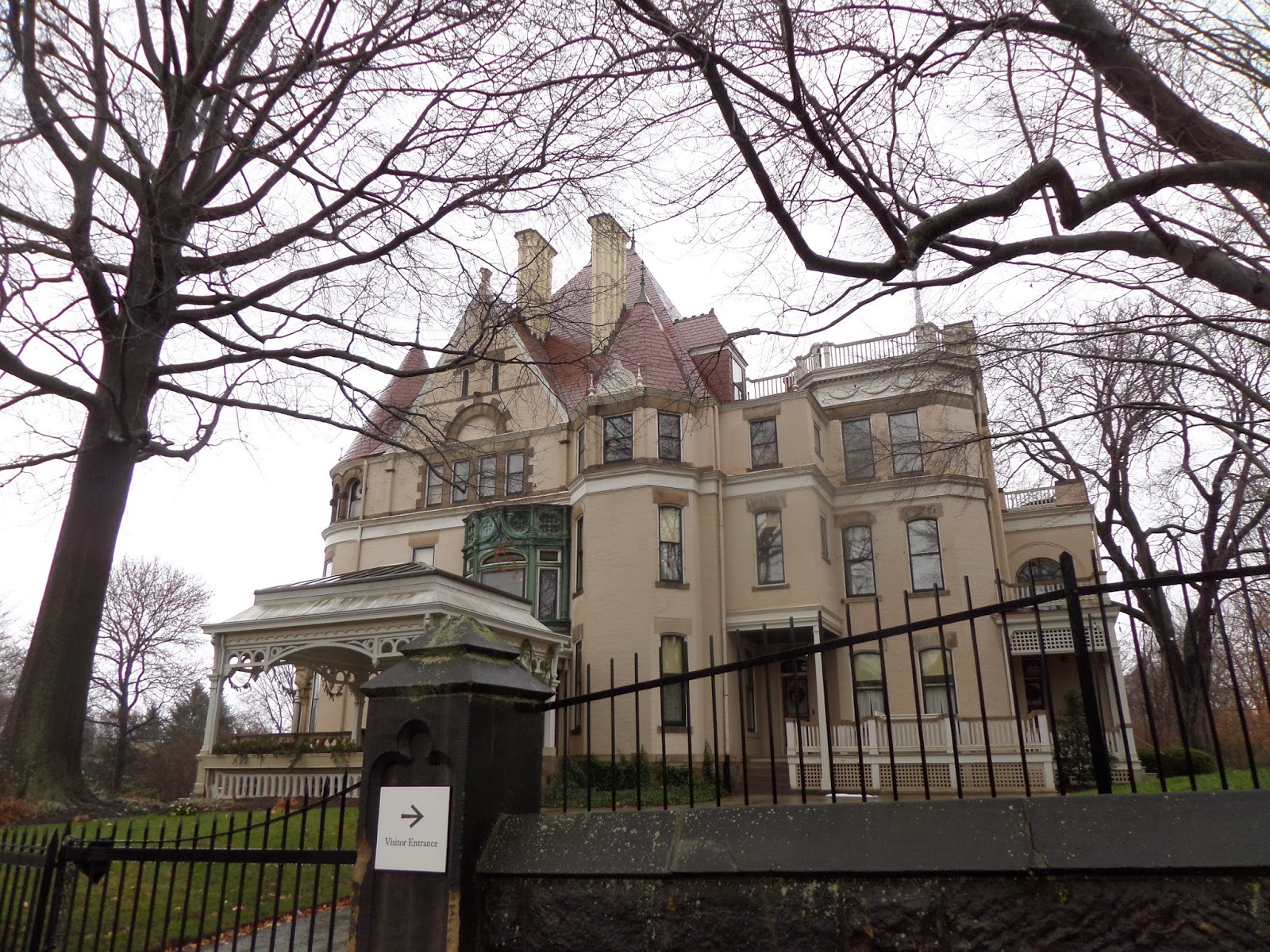 "Clayton" started it's life as an 11 room Italianate style home in the 1860's by an unknown to the ages architect.... 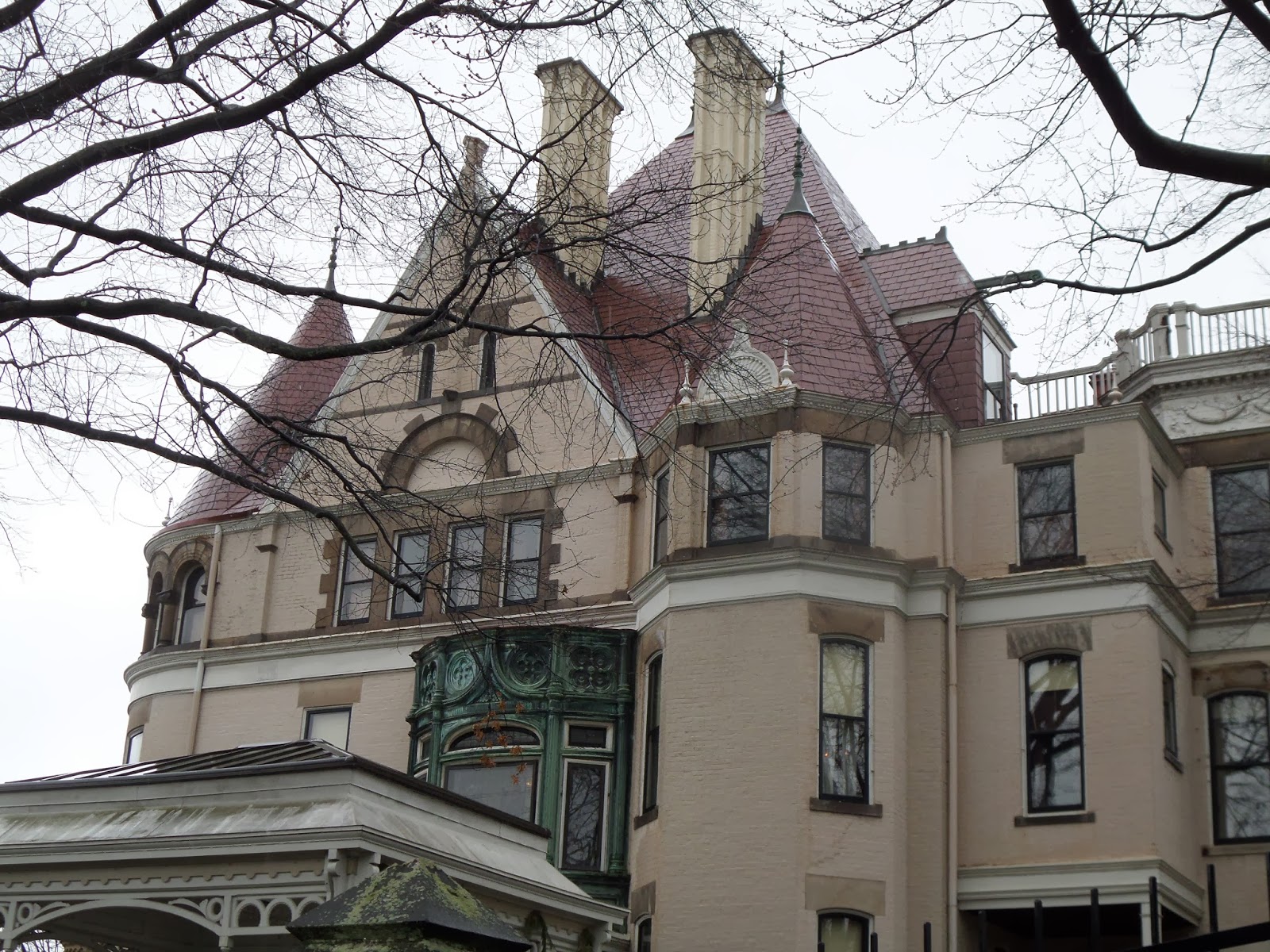 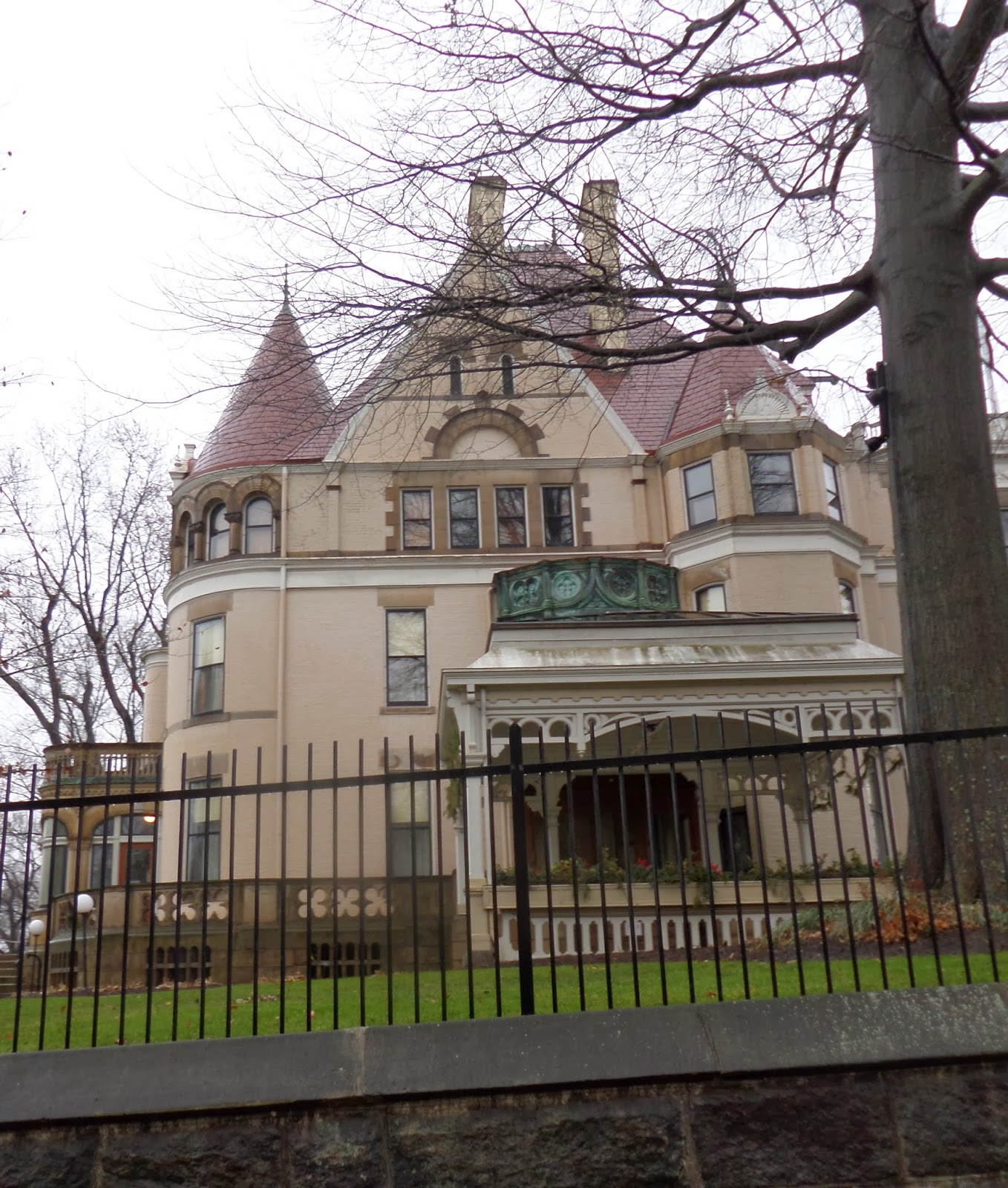 In 1891, Frederick J. Osterling, a local architect. was hired to enlarge the home to 23 rooms to keep up with the Frick's expanding family needs. 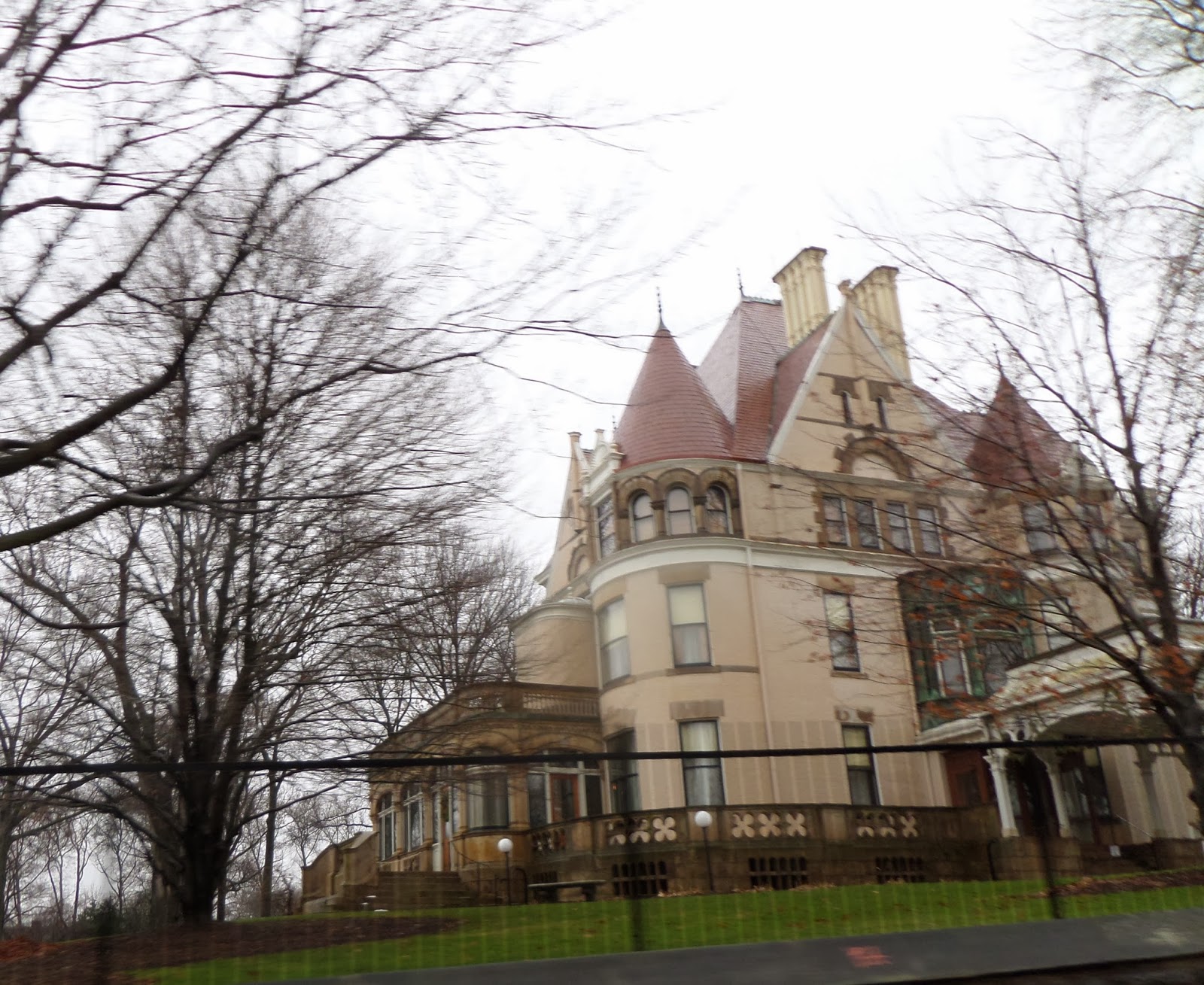 So off we went in search of lunch.
Since we were in the area, we stopped at one of #1 Son's haunts--D's Six Pax & Dogz.
They specialize in Beer and Hot Dogs.
Duh!
They also have other bar type foods.....pizza, wings, appetizers, etc.

Given that it was Christmas Week, here was that day's special...... 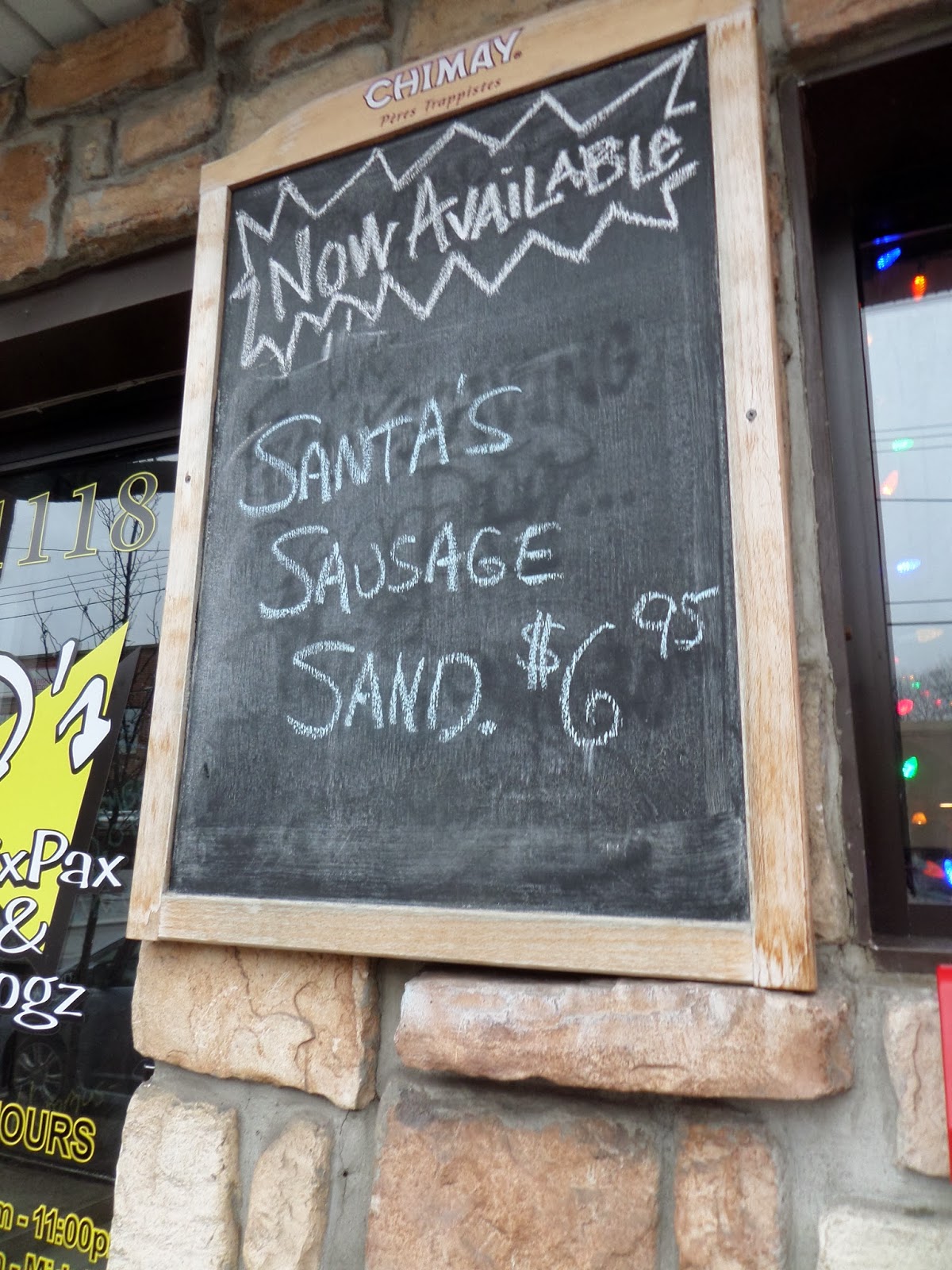 A hot dog called Santa's Sausage.....
Sorry all you perverts out there but I didn't order it. ;-)

I ordered a Mason Dixon Dog(chili and coleslaw), a specialty root beer and then went and perused the Beer Cave....... 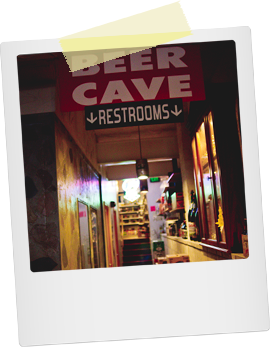 Photo credit D's Six Pax & Dogz Website.
They have a back room with shelf upon shelf of microbrews and other hard to find adult beverages.
You can grab a bottle back there and drink it on premises or grab a few to buy and takeout.

It's a real dive type place.
And the day we were there it was FILLED, nay!....JAM PACKED with football fans watching the Steelers game.
Again Duh!

Here is a little video I shot while waiting to order our food to give you an idea of the "atmosphere" there.....

I counted 4 tvs in 2 rooms(the bar room and the dining room), all tuned to the game and every time a good or bad play was made, the rooms erupted in cheering & clapping or booing.
Yes, they take their football seriously in 'da Burgh. 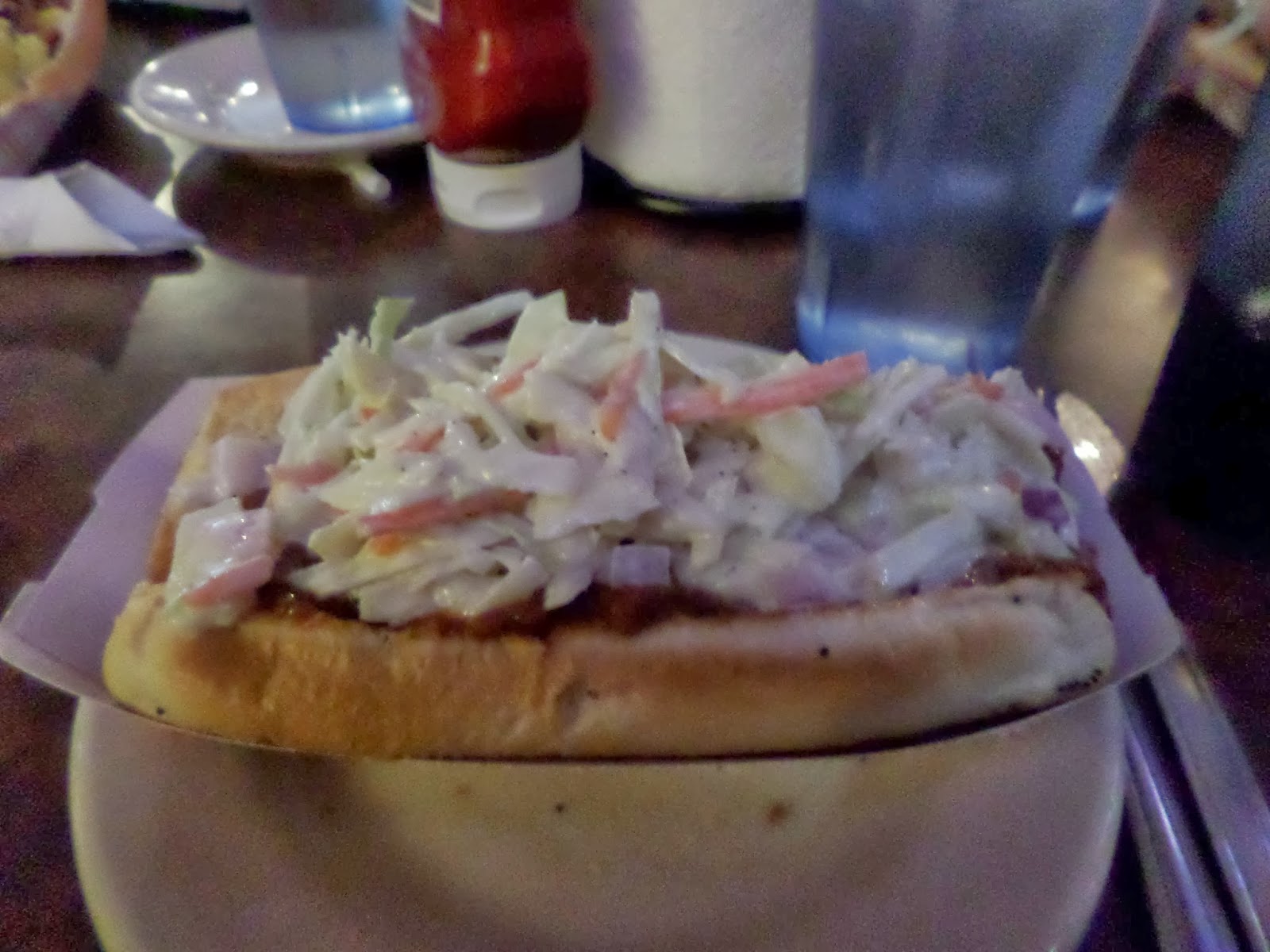 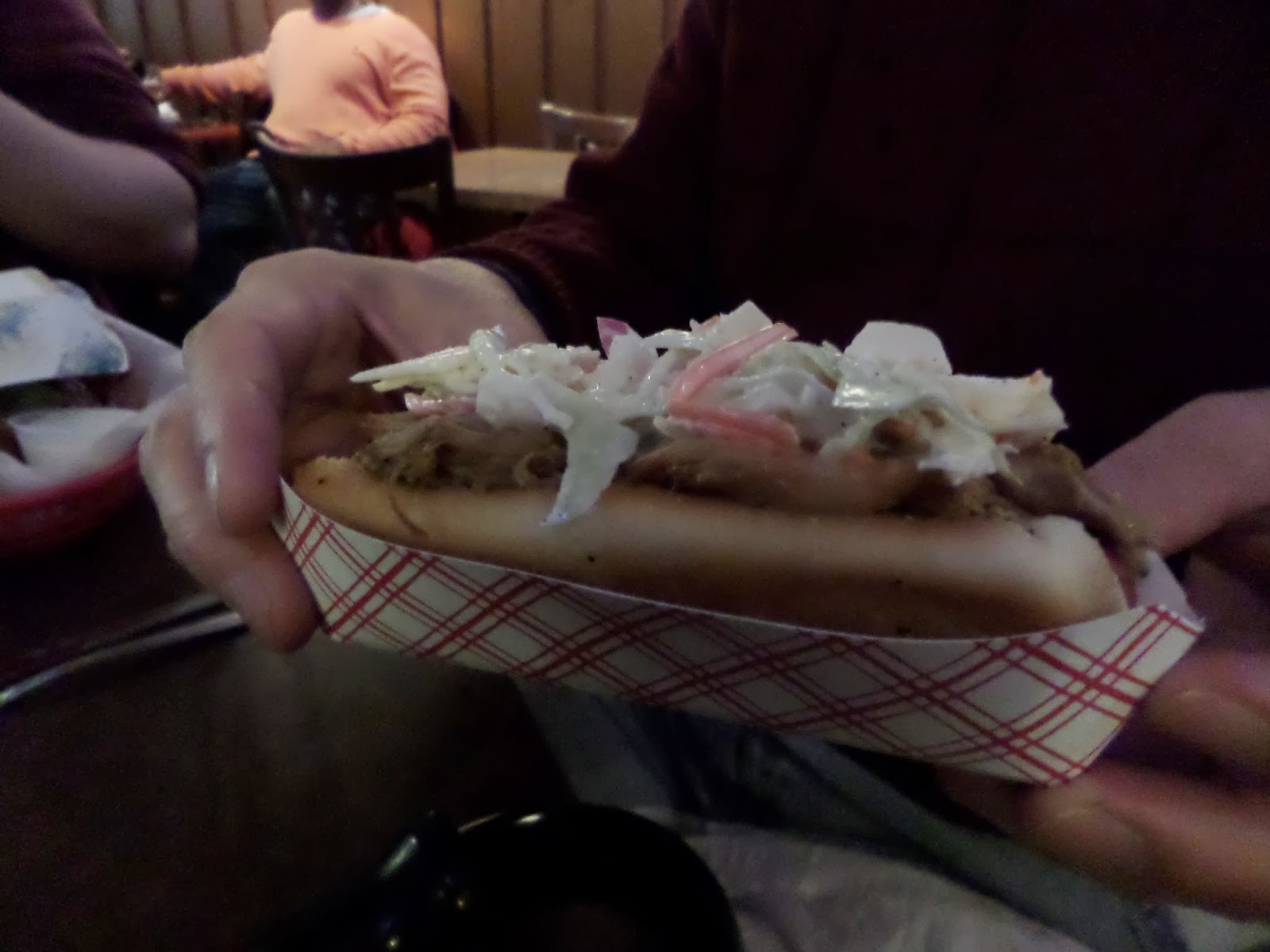 After a couple a beers I got smiles out of the crew.... 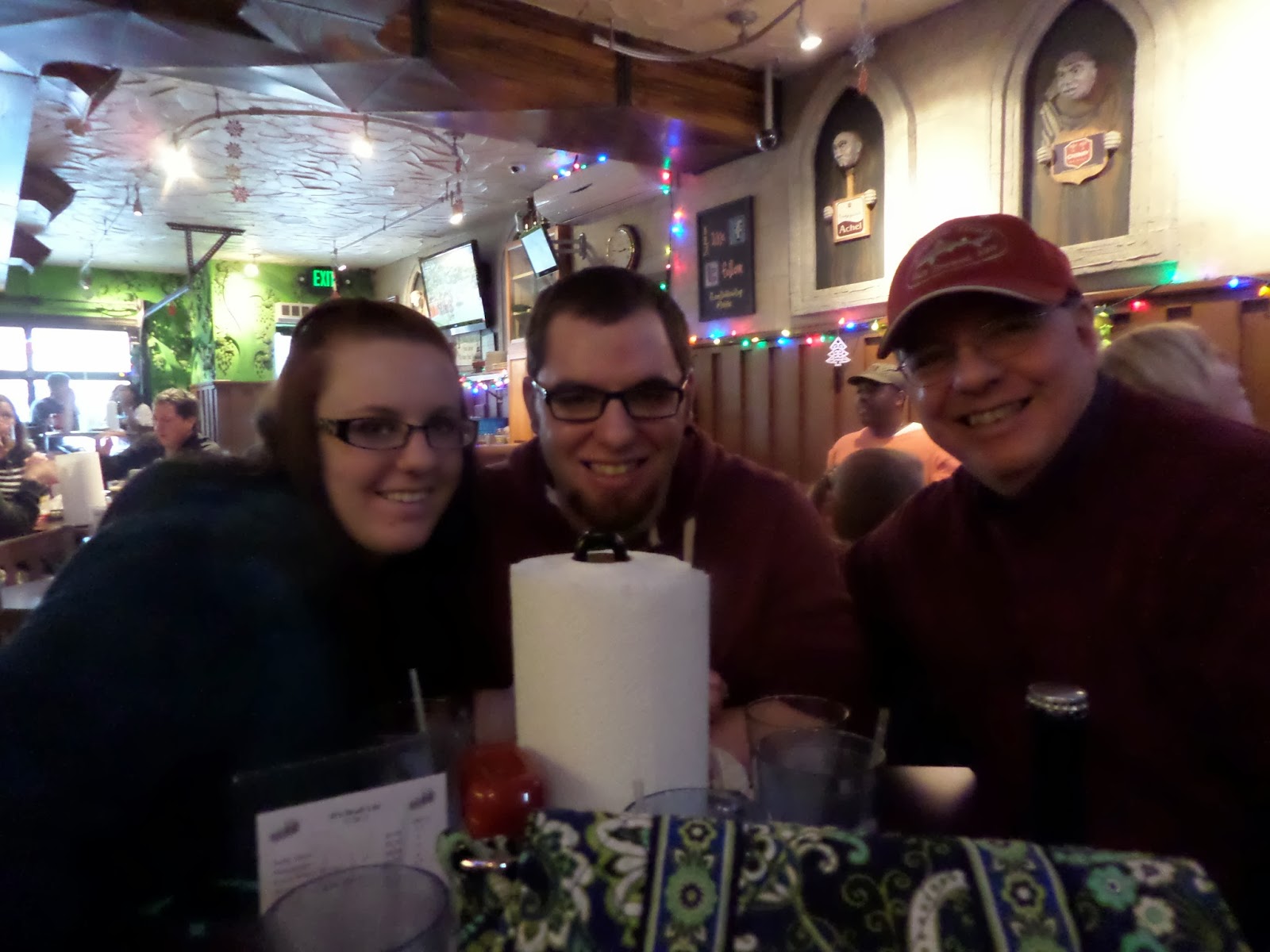 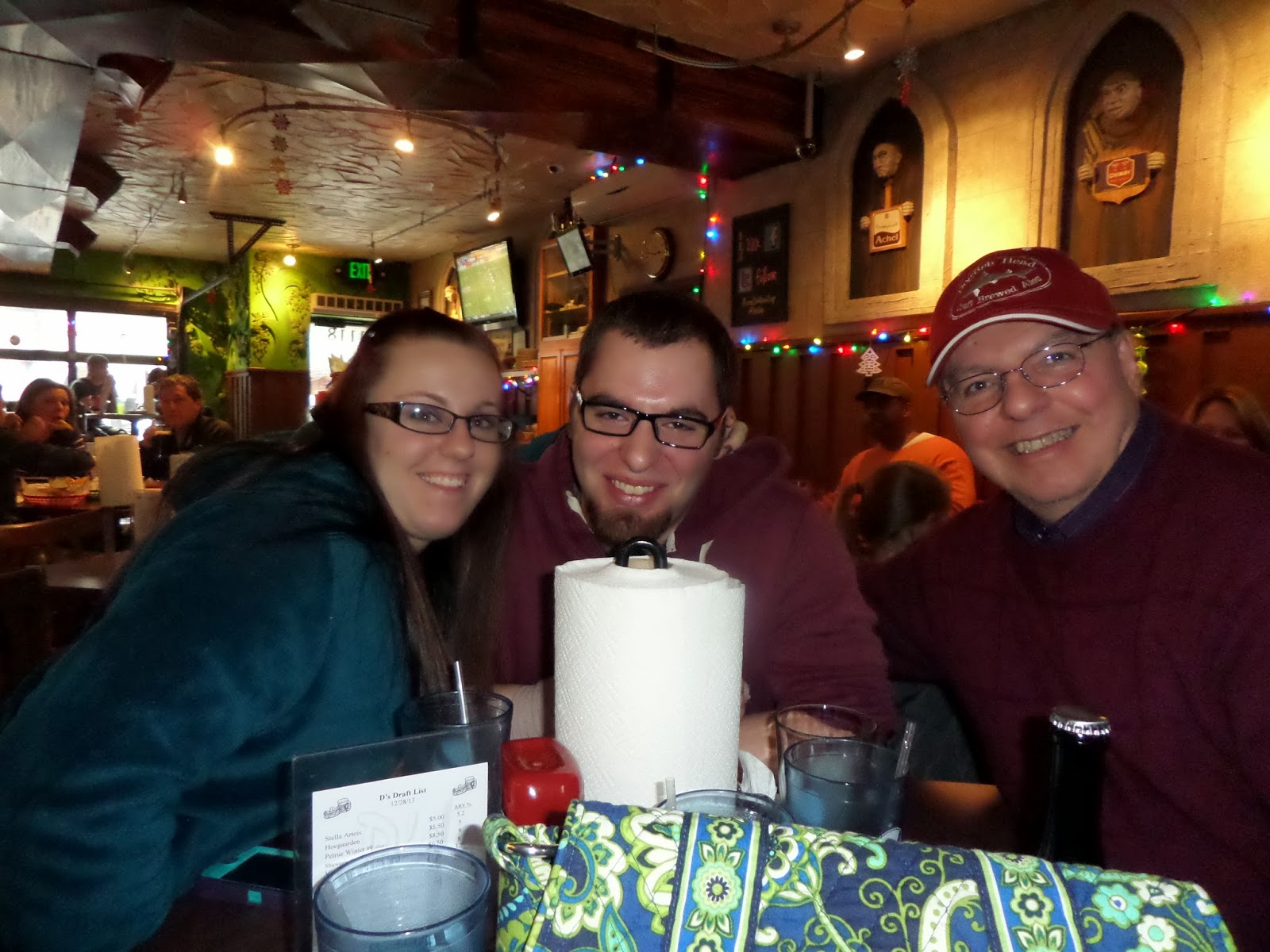 Afterward we took the kids back to their apartment.  On the way, I noticed that the minivan was making some really bad noises.....noises that snapped my brain back to what Sonya Ann's minivan made on the way to the Outlet Mall in August when we were visiting her and Den.  SA's noise was brake pads going and I swore our minivan was making those same dreaded noises.
Ugh.  I brought it to Hubs attention and #1 Son also noticed it.  There was no way we were driving home with out brake pads so we dropped them off and went back to the motel to forge a plan to get the van looked at/fixed and then for a nap....well Hubs napped.  I didn't drink so I just vegg-ed out for awhile and worried about the van.

There was a Firestone about 2 miles from the motel so Hubs was going to take it in when they opened tomorrow morning at 7am and have it checked out.  Immediate crisis dealt with, we picked up the kids and headed out to downtown for our evening meal here...... 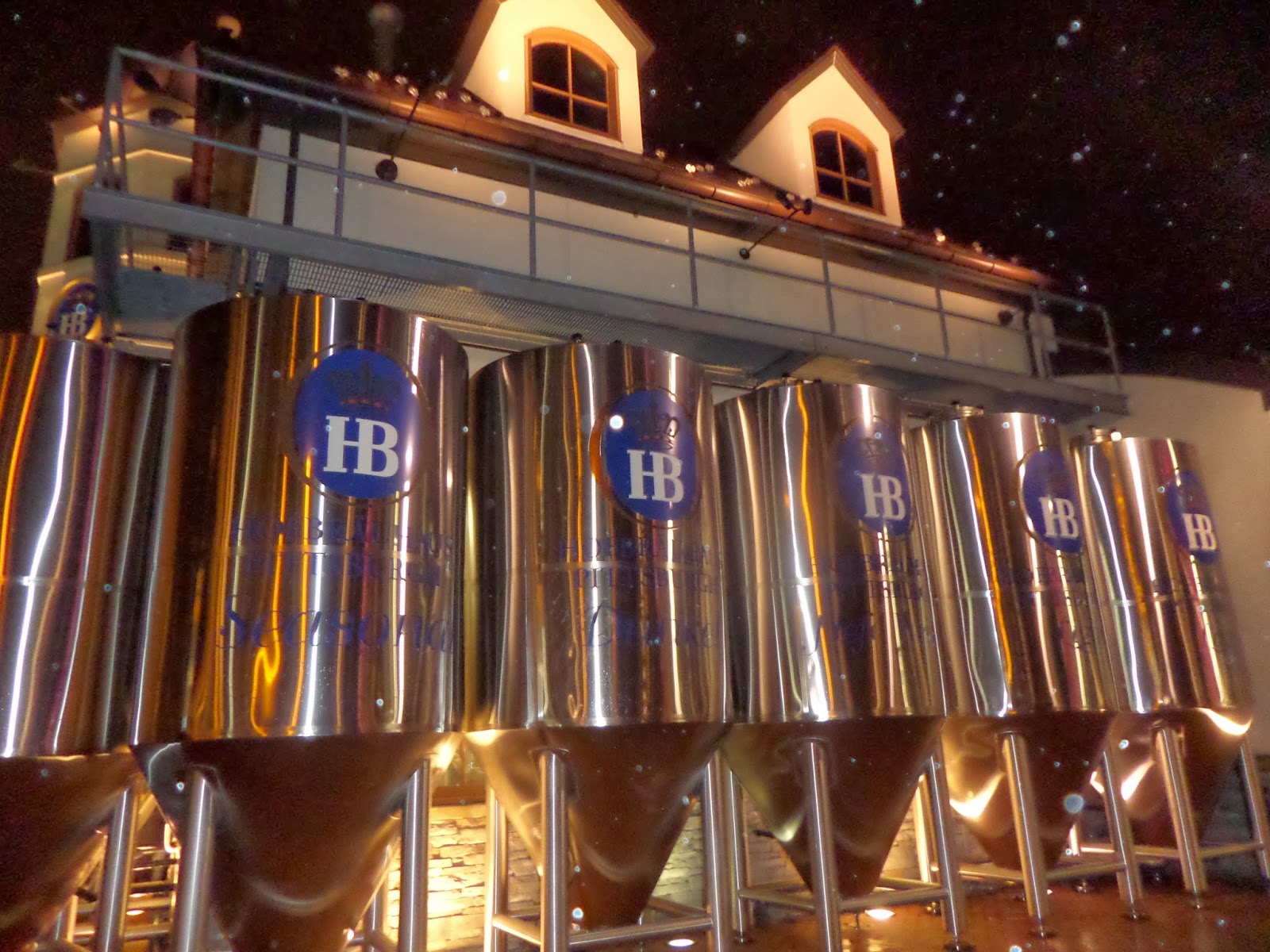 Beer Tanks on the outside of the building 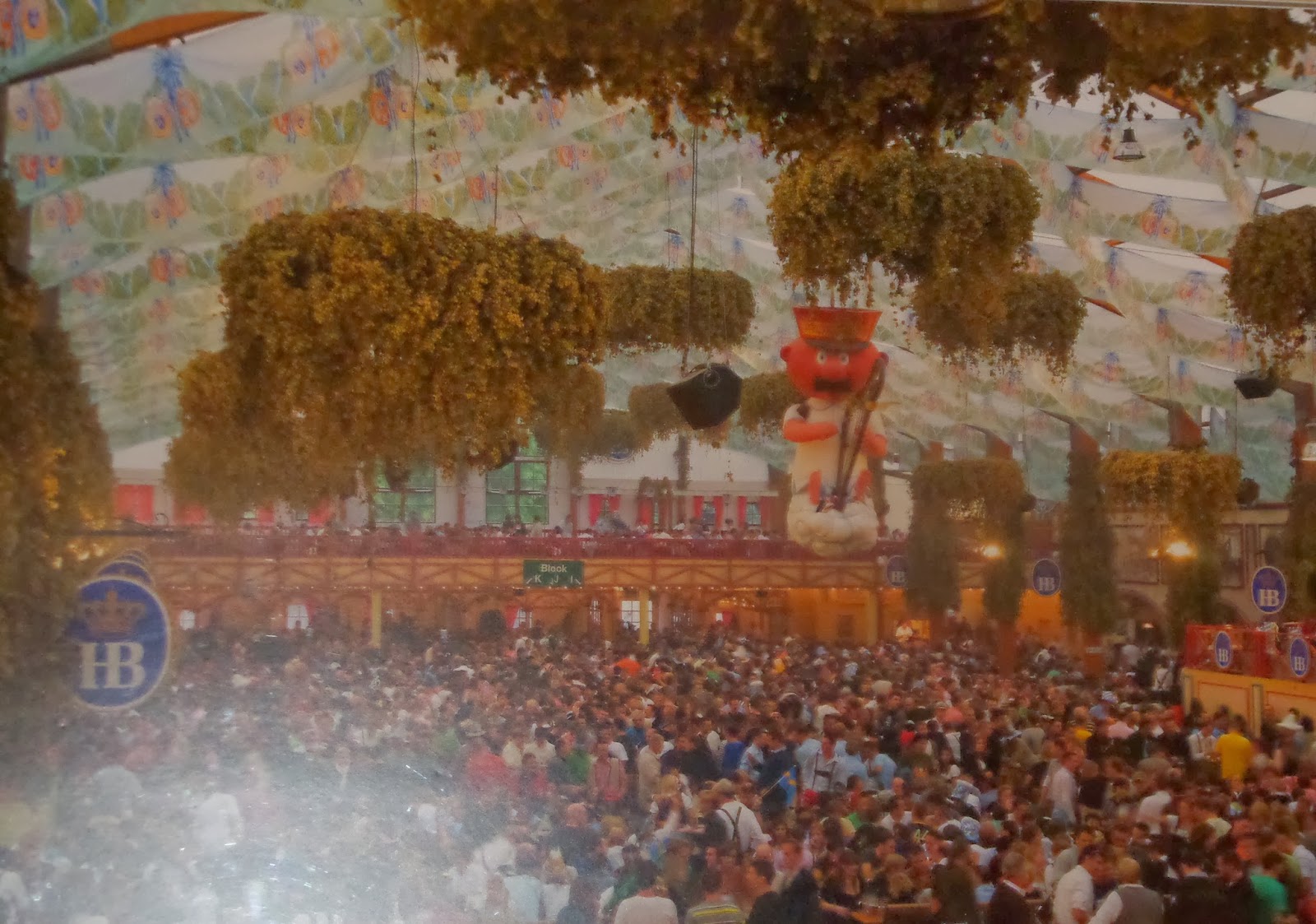 We got seated in the bier hall room and had a grand time. 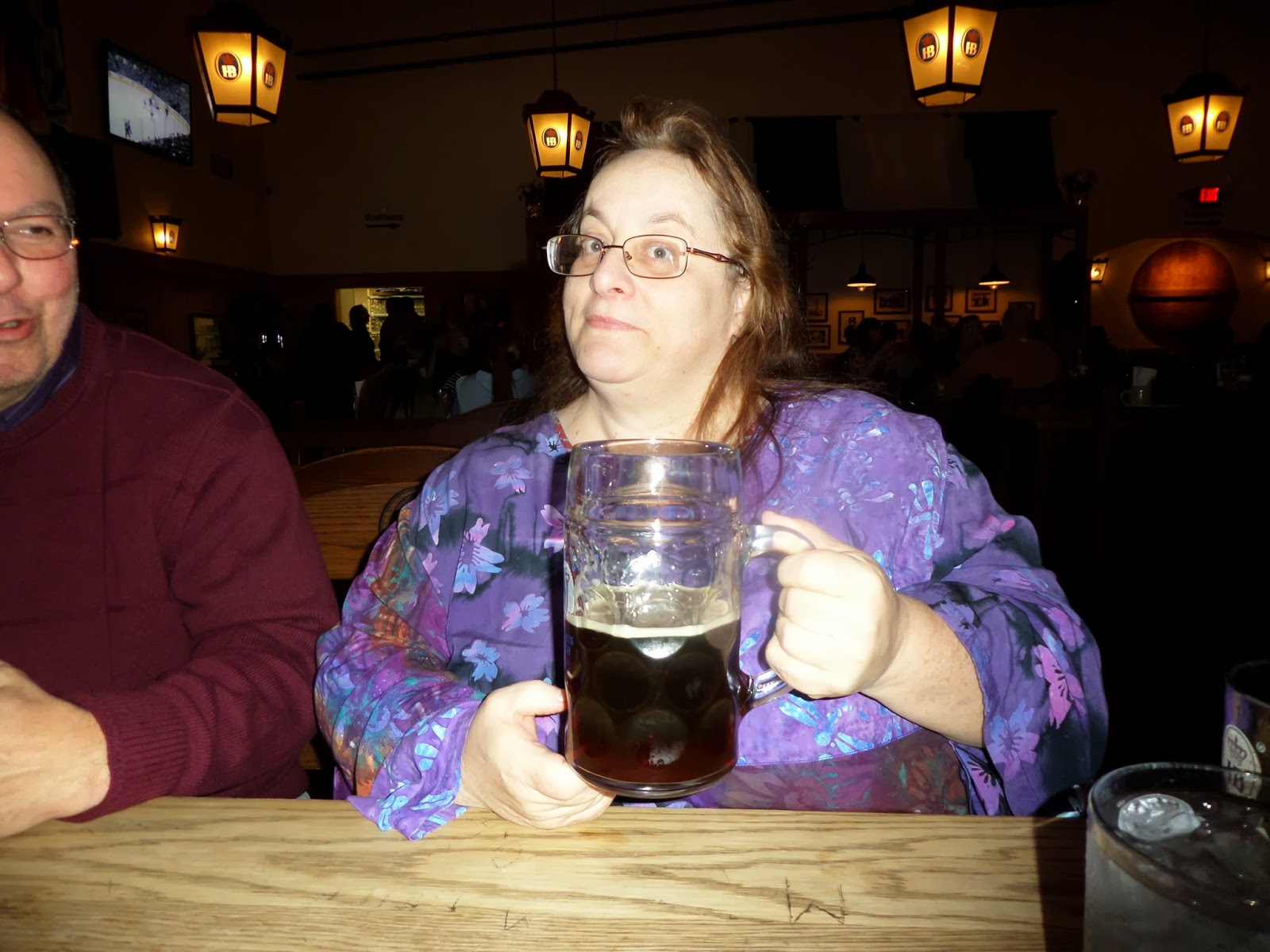 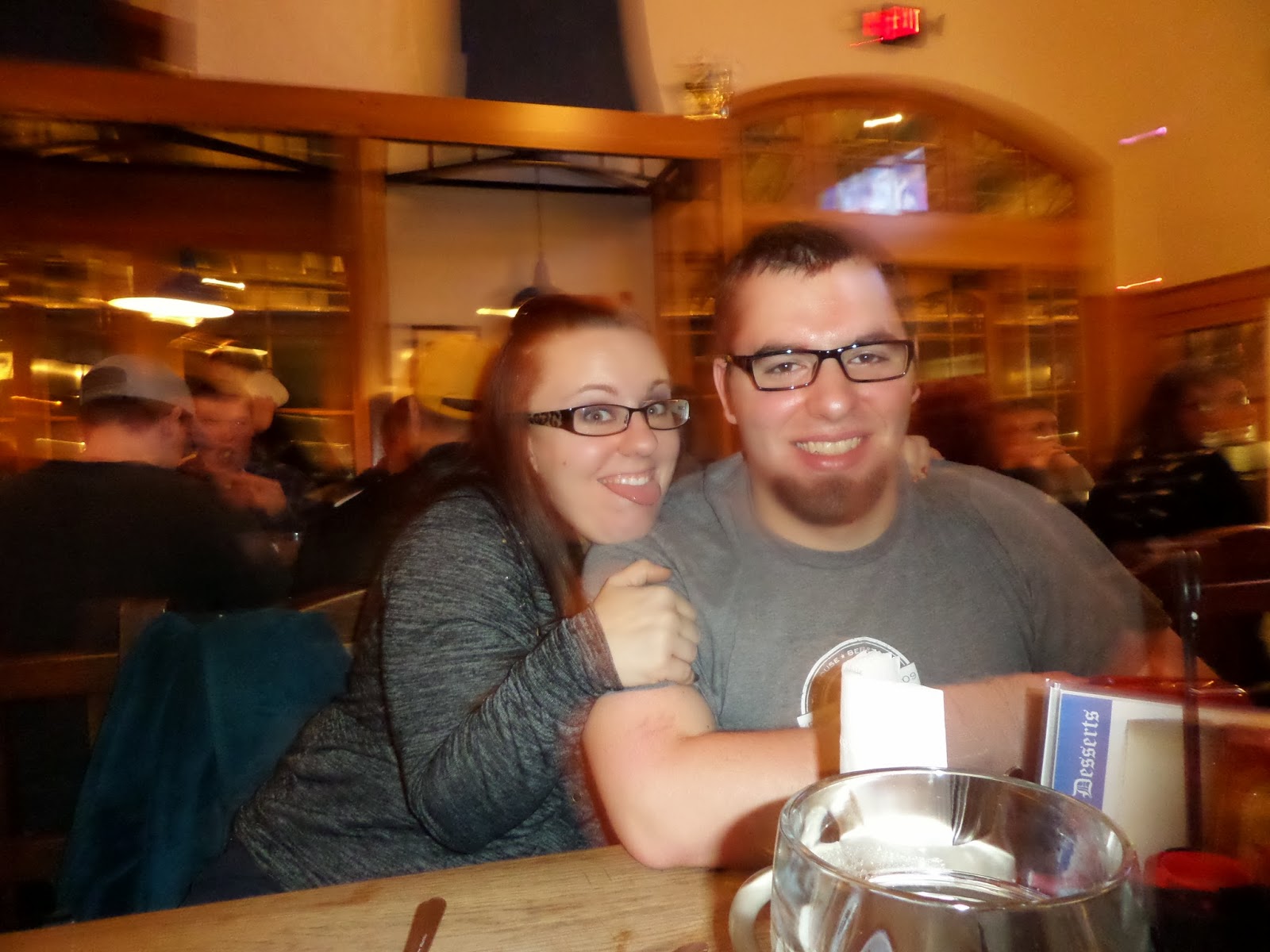 Son & GF after a few drinks. 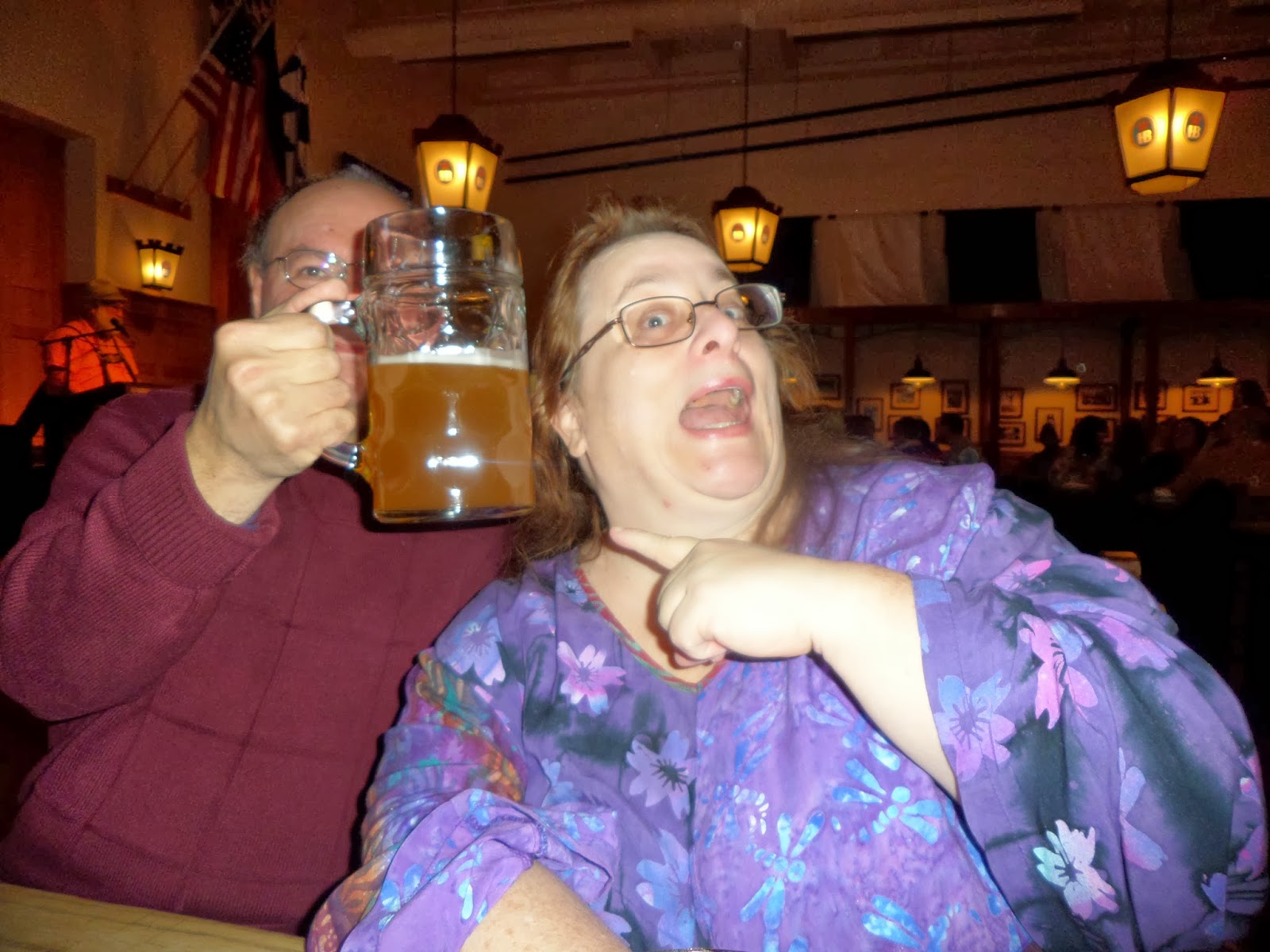 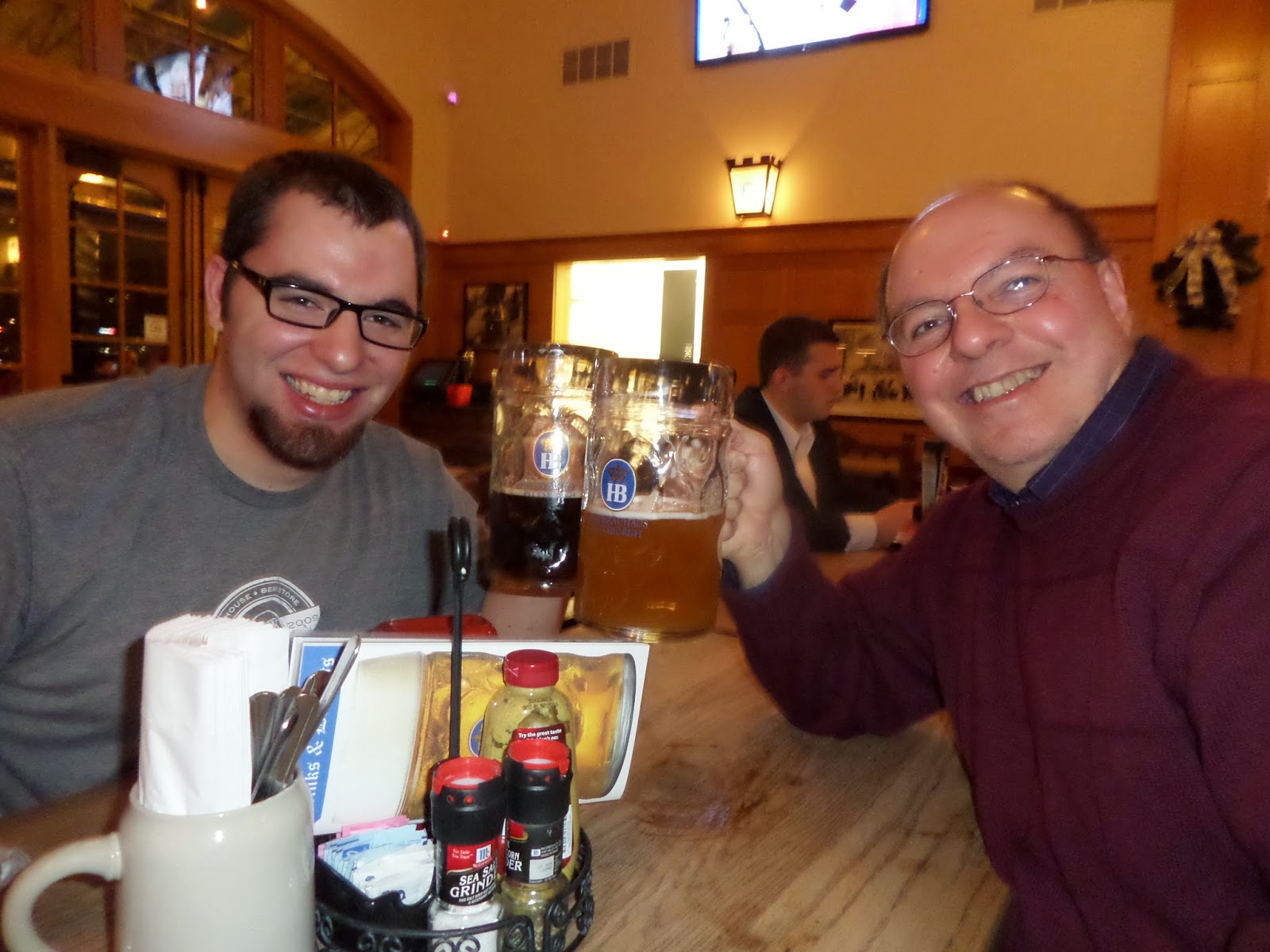 Hubs and Son bonding over alcohol....how awesome is that? lolz

I took 4 short videos at the Hofbräuhaus........see those 2 guys in the Steelers jerseys behind my son?

Remember that this was taken after a Steelers home game in Pittsburgh(and they won!). Lots of folks in the bier hall that evening celebrating the win....quite boisterously might I add. I think many of them had been at Hofbräuhaus since before the game started and were continuing the consumption of adult beverages well into the night. The entertainment guy started playing "Sweet Caroline" and those 2 guys started being all "BRO" with each other and singing and I just couldn't contain my amusement at that point.  I don't know......grown men hugging and singing lyrics like, "touching me, touching you" just make me want to wet my pants......

Ok, I know that Santa Claus was just a decoration but I was still tickled from the show our singing Bros gave us......


And the Entertainer did some good yodeling too.....


About this time I spotted Mrs. "It's a Great Idea for my young kids who are with me to see MOM blasted out of her mind drunk and dancing on the table". 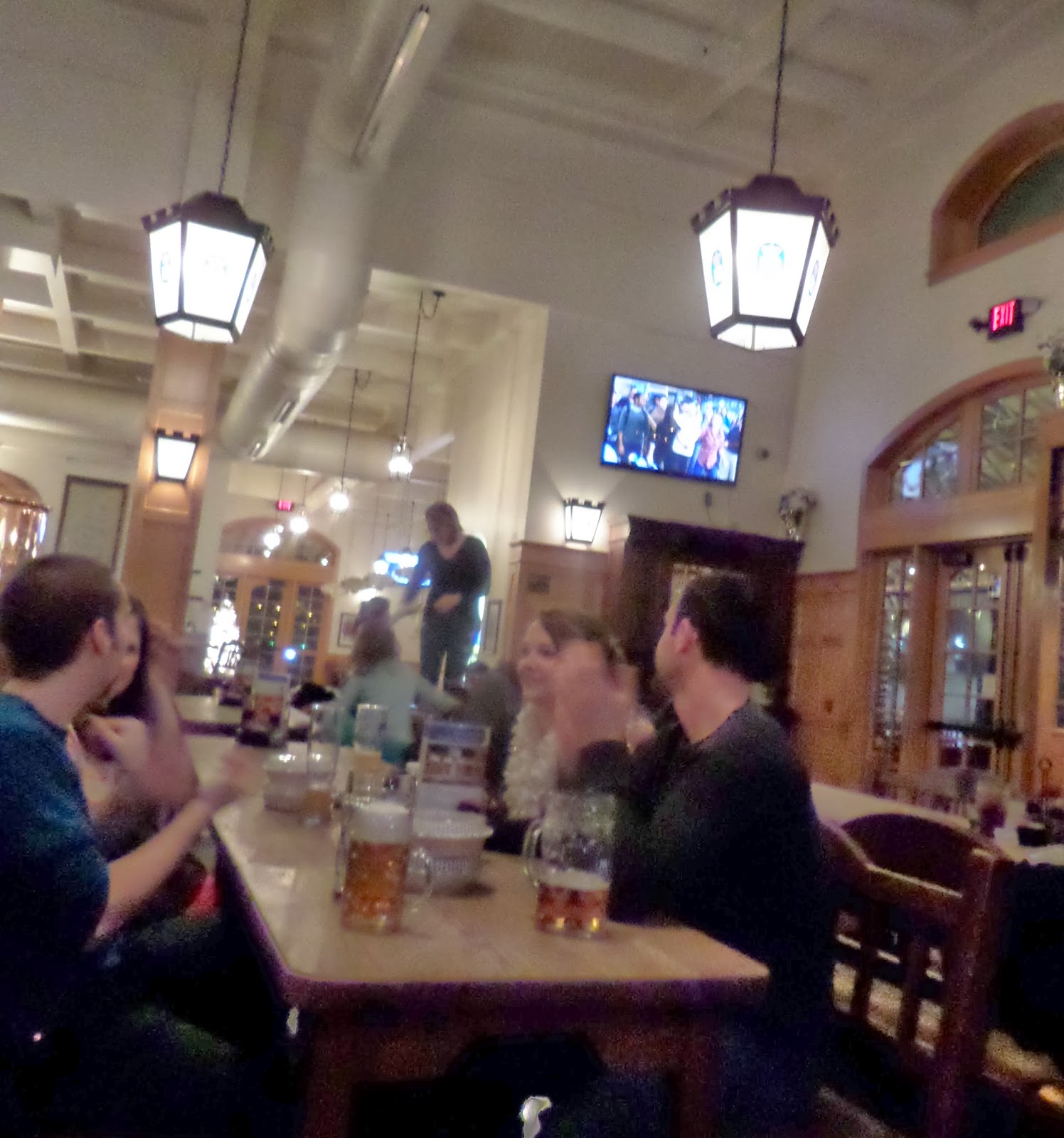 Heck, believe it or not, I did not have a single adult beverage that whole day(or evening).

We had some very delightful German food too..... 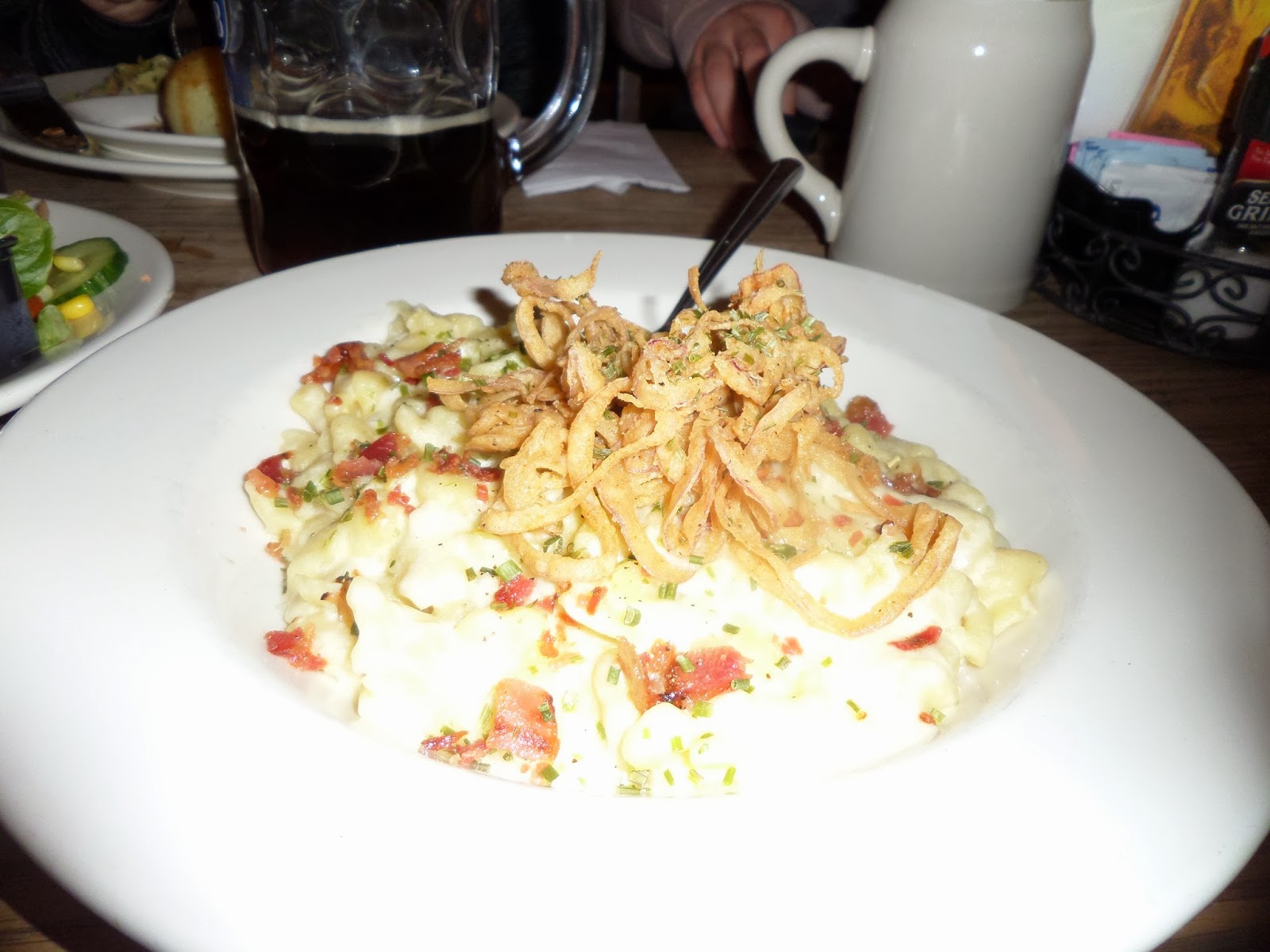 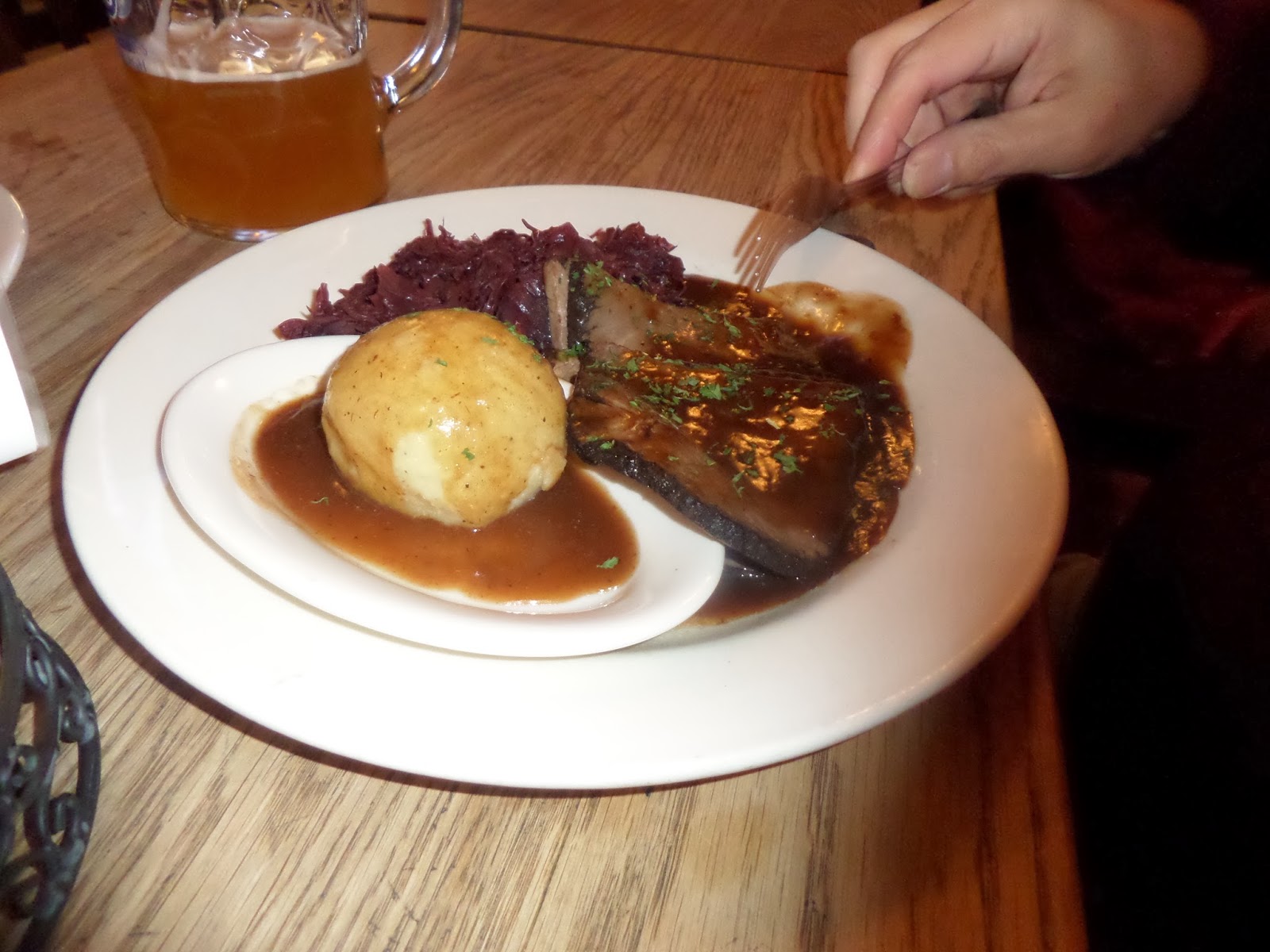 Sauerbraten with Apple Kraut and Potato Dumpling(the dumpling was meh). 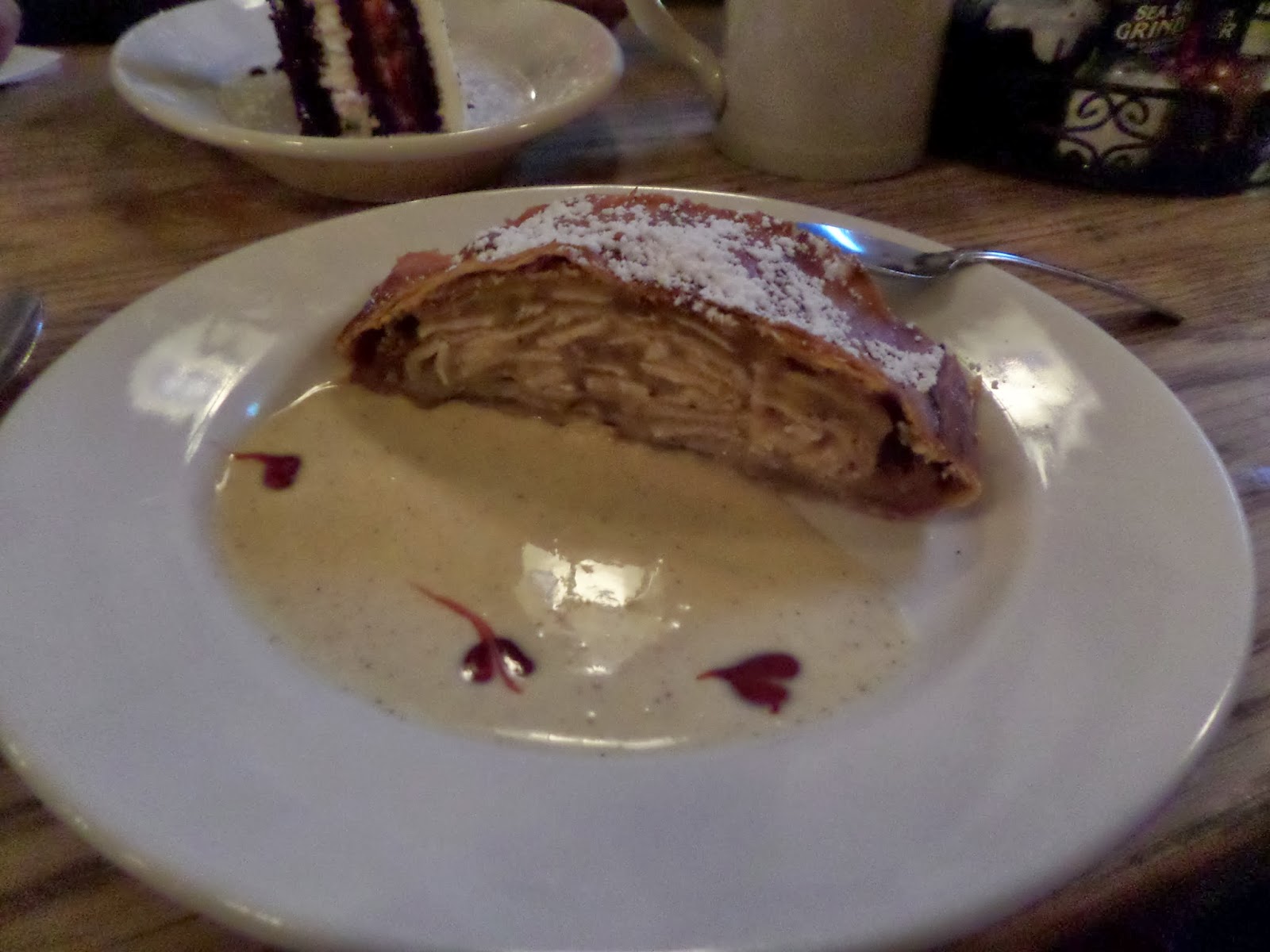 We split an Apple Strudel too. 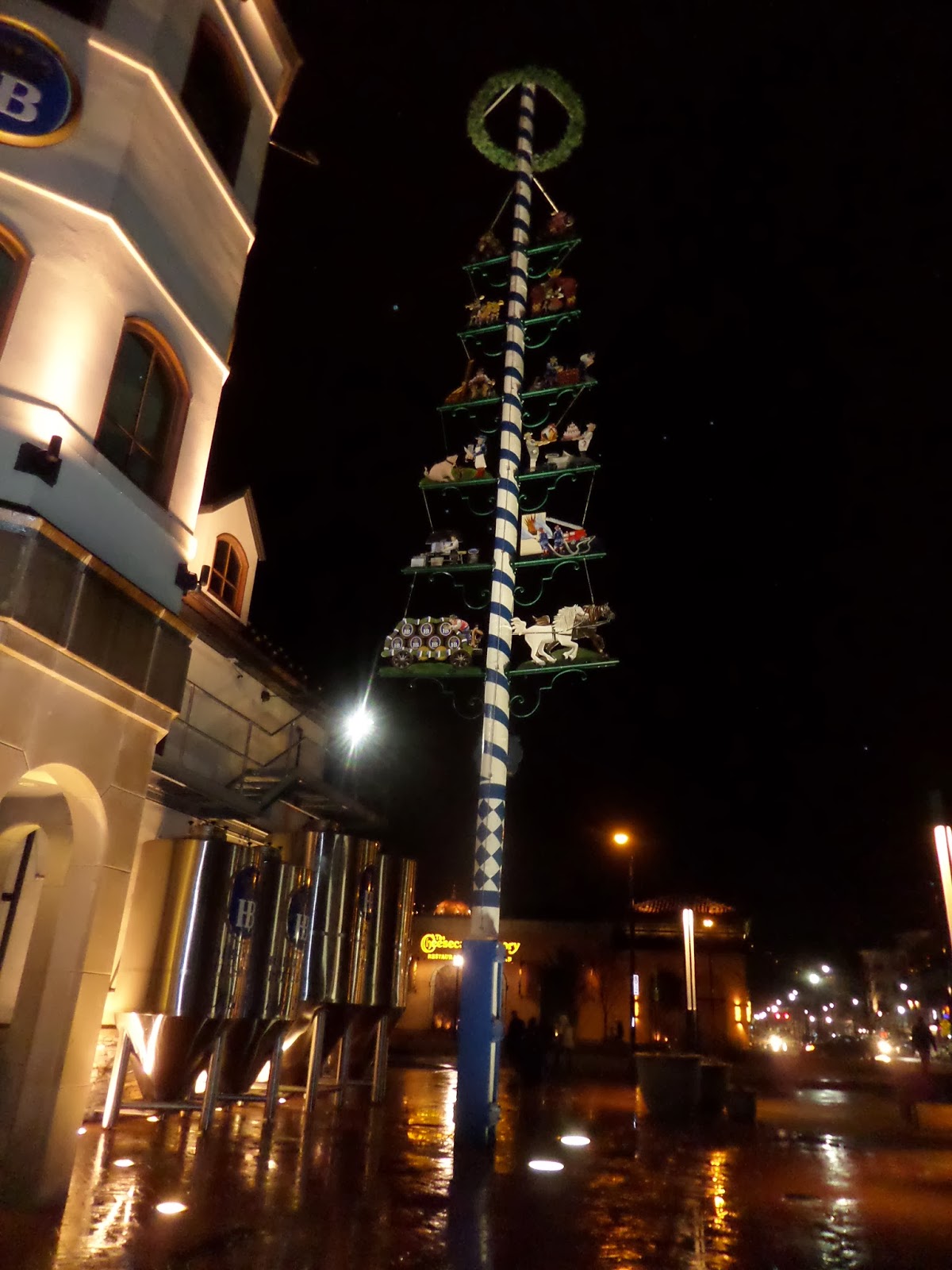 Outside Hofbräuhaus.  The maibaum(or may pole), a 16th Century Bavarian tradition.

While I wanted for Hubs to get the van, I walked down closer to the Monongahela and got a shot of the River Walk with the interesting awnings..... 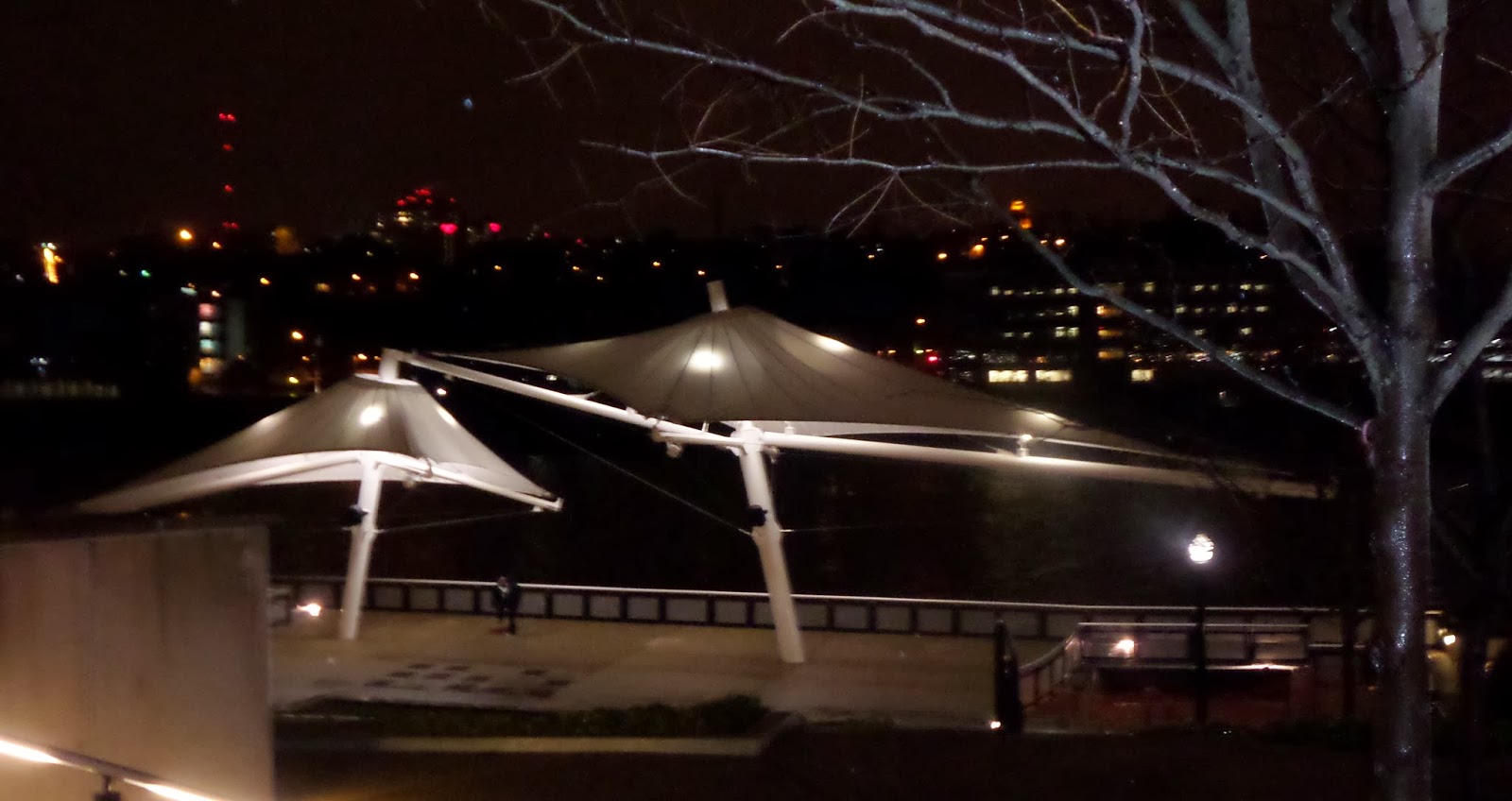 It was still raining and too cold to go down there that night.  Maybe next time, when it isn't December. lol

We took the kids home, talked for awhile then trekked back to the motel to get some shut eye.

Sluggy
Posted by slugmama at 8:30 PM