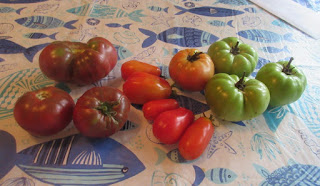 The tomatoes are coming fast and furiously and it's hard to keep up with them now, both using them/preserving them and keeping track of the harvest totals.


I think there is another zucchini lurking in the undergrowth as well....trying to get too large before I find him. lolz

I've been trying to find ways to use up all this zucchini.  I am trying to stay ahead of it.

The Sunday before my foot got hurt,  I made small loaves of zucchini bread with chocolate chips........

I made 6 but by the time I got off bed rest and took a photo, 2 loaves had disappeared.
Putting chocolate in it guarantees the family will eat it.  ;-)

Still on the list is Chocolate Zucchini Cake(will make this next week)and prolly another night of Fried Zucchini and then I am grating and slicing the rest for the freezer for use later this year.

I got creative the weekend before last w/some zuke.
I had these chicken sausages lingering in the freezer that needed to be used.......... 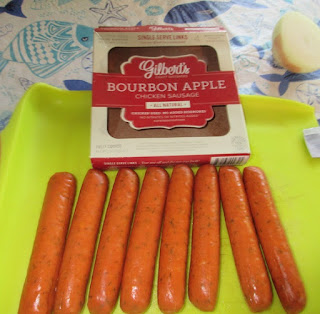 So I caramelized some onions and browned some zucchini pieces over high heat....... 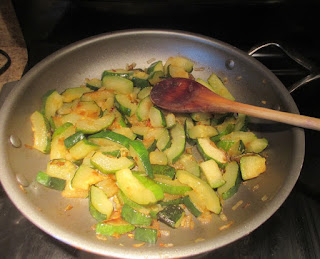 Then took half the stock from when I boiled two chickens end of last month, added some water and heated it up.......... 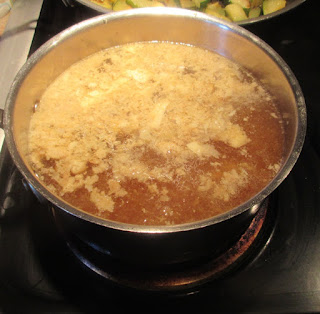 so I could make risotto rice.... 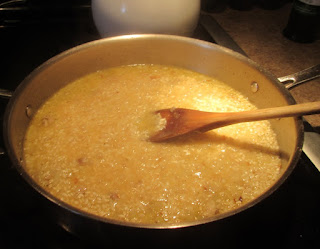 Add the zucchini and onions and the grilled chicken sausages and there's dinner!

I also riffed on stuffed green peppers(I don't care for green pepper)and did stuffed zucchini with a Mexican flair...... 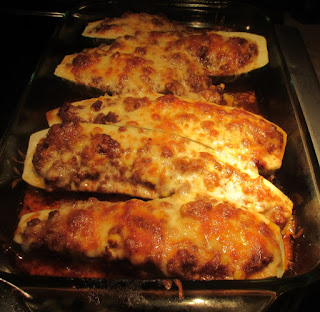 Used up 3 zucchinis, ground beef I had browned up and frozen, 3 ears of leftover corn and the rest of the leftover enchilada sauce I made from scratch when we had chicken enchiladas.
Shred cheese on top and bake and you've got Taco Zucchini.

Next year I think TWO zucchini plants will be sufficient in the garden. ;-)

Email ThisBlogThis!Share to TwitterShare to FacebookShare to Pinterest
Labels: garden harvest, too much zucchini, ways to use up zucchini