Lots of Food Shopping This Week!

I ended up doing quite a bit of grocery shopping this week besides that Target trip.
There were loss leaders and deals I could use so I took the opportunity to stock up on certain items we use a lot of.

I went back to Weis later in the week to get some meat and use my last 3 Yogurt Qs.....

Then I hit the Shursave market for 3 different "Spend X/Buy X Items, Get $X Off your Order" Deals..... 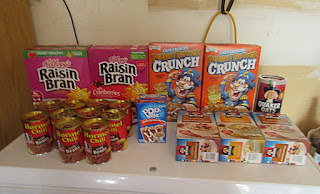 Then on Wednesday I hit another Shursave Market that had a certain brand of pasta and did the Kellogg's deal again........... 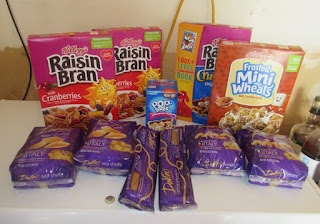 There were a few other things as well, a watermelon, a bag of frozen french fries, broccoli, a cuke, corn, a carton of OJ, half a lemon meringue pie 50% off, as well as some half price chicken breasts($2 off instant stickers at Shursave on the packages)and 1.86 lb. of boneless pork chops at Weis marked $6.28 off with sale and $1 instant discount stickers on the 2 packages.  I did not pay full price on any items this week except the milk(milk is highly regulated in PA and NEVER goes on sale).

I am off to peruse the coming week's ads and see if there are any "deals" I need.