The weather was going to be wonderful on Sunday according to the local weather guy on tv, so we loaded up the minivan and made tracks for the local Flea Market to sell my excess stockpile items.

After we got the minivan loaded I counted 13 boxes/tubs of items.  Then I had DH and kids haul out bags of lighter weight items(diapers, cereal, other boxes foods, feminine products, etc.), as well as some excess laundry detergent I decided to take at the last minute.

We arrived at 5:20am.
Here's a bad shot of the entrance of the Drive-In at about 6:15 in the morning after we had been waiting to get in for 55 mins.  Notice the street light is still on..... 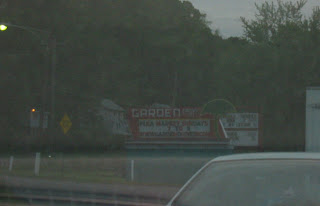 This time we arrived at the flea market earlier so we learned about the 'waiting in line' to get in vendor's line.  Last fall we had arrived a bit later and they let us right in--no lines, no waiting since there were alot fewer vendors then.  This time they didn't open the gate until almost 6am to let us in.  And the line snaked along the road for what seem like a mile!

Here we are in line to get in to set up.  We have inched slowly about 1/2 a mile from where we started.  The line of vehicles behind us went on for another 1/2 mile at least.  You can see one of the movie screens in the distance...we set up 2 rows from that screen.... 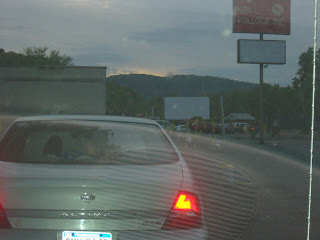 The little gate house on the right was the entrance.  But the line of vendors snaked past that off to the 2nd drive-in lot to the right and looped around that lot(this is where all the parking was for the customers later) and then back over to the entrance gatehouse to actually get into the lot to set up.

Thankfully we showed up early since they let vendors in until they run out of room and I think they did run out of spaces before vendors.  It would have been horrible to have packed all this up and gotten up at 4am only to be turned away at the gate!  I think DH would have killed me....
We watched as cars passed us to get to the back of the line.  People with cars, not trucks or vans, with so very little amounts of stuff to sell.  All I can think is these folks were trying to sell off what didn't sell at their garage sales on Saturday or they live somewhere out in the sticks where you don't get enough foot traffic to have a successful garage sale, so they set up at the flea market instead.  It just seems to me that the $15 they charge for a space is a lot considering the among of used flea market type stuff these people were arriving with in their cars.

The flea market on Sunday was mobbed with even more customers than in the fall I think.  Customers were parking up on the highway as the parking lots were full.  The State Police showed up threatening to tow cars away every 20 min. or so.

What I couldn't give away.....
Feminine Products

Everything else sold well to moderately well.
Sold a lot of shampoo and body wash, even the men's stuff which usually doesn't sell as well.
Dove, Herbal Essence, Pantene almost sold out in Shampoos while Garnier didn't sell but a few.  I even sold some low end 'poos like VO5, Prell and Suave.
Body Washes sold better this time than in the past.  Bars of soap(Dove/Olay/Ivory),except for a couple of 6 packs didn't sell much at all.
The dental stuff--toothpaste, toothbrushes, floss--didn't fly off the table like previous sales but sold steady.  What did go fast was mouth wash.

Ladies razors did better than men's razors and everyone wanted razor refills/cartridges....at $15 a pop retail and hardly EVER any deals to get those for almost free, of COURSE they wanted those!lol

I'm surprised that the Benadryl sold out(I should have brought more!)and that other OTC meds went well--like NyQuil, Theraflu, Tylenol, Rolaids, even some Vitamins.  I even sold the box of Prevacid($25 retail)for $10....the box that I paid $1 for after sales/Qs at Rite-aid and got a full rebate on from the company.  I also sold most of the high-end Olay stuff--cleansers($2.50), $30 creme stuff(for $10) & an Eye Roller($8)--all of it free or gave me overage after sales/Qs and various Olay rebates.

Last time in the fall at the flea market, my Deodorants sold like crazy....not as much went this time. I did raise the price from $1 to $1.50 with a special of $5 for 4 deos which made them $1.25 each.  Actually as I think about it, the MEN'S Deodorants sold very well, more than the Ladies.  Maybe all those ladies who bought arms of them from me last Oct. are still is working on what they have already.lol

A few folks recognized us from last fall....I guess they are regulars at the flea market.  One guy showed up who had been to our garage sale last July at our home, and remembered coming to our garage sale there.lol
I recognized a few people from last Oct. when we had set up.....especially the Russian gentlemen who kept coming over trying to talk me down on EVERYTHING. SINGLE. THING. he wanted to buy.  And in broken English.....and he wouldn't give up even when I said that's my final price.....and when I say final price, I MEAN final price.
Ugh
That got old real fast....

God love the Latin American immigrants though.   I did land office business with the ones who came to my table.  They were very good customers last fall too.  My Hispanic women customers love the beauty products and they know a deal when they see one!   And I get to pick up some conversational spanish in the equation so it's all good. ;-)

The bottom line.....
We did well.
But not as well as in the fall.
But it was the "worth going kind of well".

I didn't see any other people with toiletries set up, though there was at least 1 person selling food/grocery items there, so we didn't have competition.
But there were just so many more vendors I think it was more difficult for customers to cover the whole market or find you again if they left and were going to come back later to buy more.
And more vendors meant more ways to spend the money so less money to spend with me. ;-)

Judging from the amount of vendors, the amount of shoppers and what we took in the 1st hour, I told DH that we'd probably make $500 for the day.  We kept hopping with customers but it was never the craziness of last fall's market.
We stayed longer this time too.  Last fall the place was pretty much a ghost town by 11-11:30am.  The customers cleared out by 1pm this time and we packed up and left by 1:30pm.
The weather was gorgeous & I ended up with sunburn on my forehead, nose and chest despite keeping out of the sun as much as I could.  I hadn't counted on the sun being in a different place in the sky in the spring as opposed to fall....I had no problem with sunburning last fall due to the mountain ridges in relation to sun position.  Not so lucky this year.
Note to self....bring a hat even if you don't think you'll need one.

Like I said we took 13 full boxes of stuff.  Here's what the back of the van looked like before we unloaded it..... 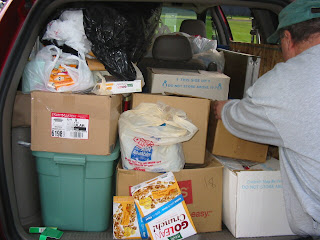 And here is a shot of the back through the side door of all the bags of stuff thrown on top... 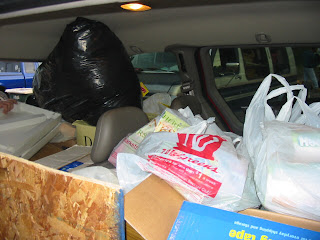 DH gauged the day a success.  To him, a successful sale was a sale where we did NOT run out of plastic bags to put purchases in.  If you remember last fall's flea market we experienced a severe bag shortage HERE.  DH has been saving used plastic bags since last Oct. for this day.  I was chastised on multiple occasions Sunday for doubling bags for fear we would run out before selling the last items of the day.  But as I told DH I do believe we brought MORE plastic bags than items to sell this time.lolol
We went with 13 full boxes and scads of bags(20?) of more stuff.
We left with 6 empty boxes and only 2 bags of stuff left.

If anyone is interested in my price list, just let me know and I can post what I charged specifically.
I made up a price list for DH but I figured him having to refer to it every few seconds would not be efficient.  So I marked prices on about 3/4 of the items with a permanent black marker. No fooling with price stickers just write the price right on the item.lol   I also tried to keep track of how many of what I brought with an inventory sheet but by box #7 or #8 I gave up on that.

I still have 7 boxes of items and I am not going to be doing the flea market again anytime soon.  Maybe in the fall again, depending on how I feel then.
If the community holds another garage sale this summer, I'll consider setting up for that if I get the garage in shape by then.lol

Sluggy
Posted by slugmama at 2:15 AM