Before we moved to the house we presently reside in here in "Teeny Tiny" Town, we lived in a house outside of "Itsy Bitsy" Town, moving there in 1986.  Itsy Bitsy Town is right near the Delaware River, which serves as border between PA, NY & NJ at that area.  The interstate has an exit to the west of "Itsy Bitsy" Town near the neighboring "Even More Itsy Bitsy" Town.  There use to be a Gas Station/Mini Mart at the exit ramp where they sold fireworks every summer from a stand set up on the grass by the parking lot.  People would pop over from NY & NJ, where these fireworks are illegal.  The stand did a "bang up" business if you pardon my pun. ;-)
Here's the best photo I could find on the internet.  You'll have to pardon it too as it's from the massive flooding from 2005.  The red dot is the exit ramp and the white circle is where the gas station/mini mart stood.  The blue circle is the fire department building. 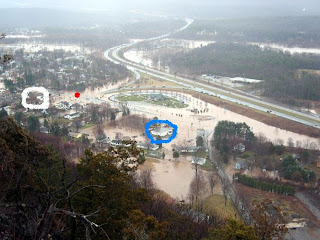 Pretty soon the Gas Station/Mini Mart did so well they started selling fireworks inside the store.  Flush with money they got a Taco Bell franchise(first for this area)inside part of the store.  The franchise didn't last but a year or two and then the Mini Mart expanded the fireworks they carried into the old restaurant part of the building.  I used to attend the Bingo at the Fire Dept. building a couple of lots away from this Gas Station/Mini Mart.  I drove by it many times a week taking my oldest 2 kids to the private school they attended for awhile over the river in New York.  I bought tacos and chalupas in that mini mart and pumped gas there too.
After we moved out, at some point the people who owned the Gas Station/Mini Mart sold out to a big fireworks chain--Phantom Fireworks.
If you get were I am going with this you are correct....this is the same place the suspected terrorist bought his fireworks he used in his car bomb parked in Times Square.
Here's a mention in the local area paper.

It is totally freaking me out....and I haven't even lived there for 10 years!

Sluggy
Posted by slugmama at 7:17 PM

Email ThisBlogThis!Share to TwitterShare to FacebookShare to Pinterest
Labels: Milford/Matamoras PA fireworks connection, terror attack in Times Square, where I use to live