I want to thank everyone who left birthday wishes on the blog for me!
Lots of old blogging buddies as well as new folks coming out of lurkdom and somewhere in between too.

It all warmed the cockles of my old, increasing grumpy heart....

Hubs took me out to Denny's at lunchtime on Monday so I could claim my free Grand Slam meal.  Then the family did the singing and cake thing Monday evening.
Daughter even got me a Whitman's Sampler box of dark chocolates.
And she put this on top of it..... 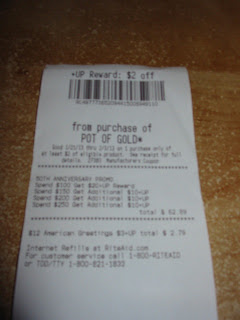 Evidently she's been giving Rite-Aid our phone number(which gives them my Wellness #)when she buys stuff there, because I am suddenly up to $62.89 for the $100 I need to get the 50th Anniversary Reward. lolol
I told her to go buy some more stuff there before Saturday to get me to $100 in spending.

Why didn't I think of this much cheaper way to get +Up Rewards years ago? lolol

Hubs didn't give me anything yet so maybe I'll give him a list of things that qualify for the 50th Anniv. Promo that I want for my birthday at Rite-Aid. Hmmmm......

My Gas Points at Weis expire on Saturday too.  My gas tank should be pretty low by then so I hope I remember to go get gas and use that .30¢ discount.

The Daughter has changed her educational plan yet again.....sigh
She's looking to attend a different community college in the Fall so she dropped 2 courses that won't transfer and that she doesn't need for the program there.  The program she was trying to get into here isn't working out(due to high demand and her placement test scores weren't so good), so she's going to move out of state and attend another program(once she places in).  I hope this one works out.

#2 Son got a job on Friday.  Well, he sort of had a job at a different restaurant, but they hardly ever called him in.  He was like the substitute's substitute dishwasher or something.
So he finally got an application together and went up on Friday and they gave him the job on the spot.
He's already worked 2 nights and seems happier and they haven't fired him. lol
Now I don't want to hear how the 18 year old nephew can't find a job and has been looking for a year now with no luck.  He just doesn't want to have to DO anything to get paid....except sit on his ass.

Now we have the Driver's road test next week for #2 Son.  If the parallel parking doesn't sink him, he'll do fine.

I've got to make reservations for #1 Son's graduation in May.  He'll be a college graduate in just over 4 months!  Goodbye FAFSA!!!lolol  This will be a 3 day saga since it's on the other side of the state.
I told him not to count on many of the family coming to it, since nobody lives out there.  They'd all have to travel and pay for lodging/food/gas to attend and most of them don't have the extra cash to do this.

Now I get to worry about him finding a job after college in his field.  I know he'll do whatever he has to to stay afloat economically but I worry anyway.  That's my mom job after all.....

Gotta get up to the grocery store and then mail some textbooks back to Amazon.

What's going on in your world lately?

Email ThisBlogThis!Share to TwitterShare to FacebookShare to Pinterest
Labels: birthday, college, kids driving, kids working, updates on the family, what's going on in my life