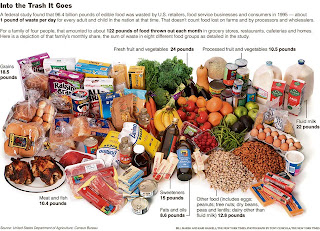 And this is just one thing wrong in this country.

I watched this segment on the national news the other night on Food Waste.
Go check it out HERE.
Go ahead.....I'll wait.

My thoughts......
First off, they seem to have no clue what they actually spend on food for a week.
I think they pulled that $300 number out of the air, because then they go on to think it extrapolates out to up to $1500 per month.
Yah.

Second, the husband is a financial planner.
Hello?!?
You work as a money professional and you don't seem to operate with a budget on a personal level, you have no clue how much money is going to your food expenses AND you are allowing on average 13 POUNDS of food to be thrown away every week?!
Would you want this guy to be advising YOU on how to take care of YOUR money? lol

Third, have these people never heard of LEFTOVERS?
Obviously they've never had to eat them before given the amount of money they make.
How difficult is it to take Taco Meat and incorporate it into something else?....or take Squash Soup and remake it into a sauce or blend it into some kind of baked good?.....or take leftover produce and do ANYTHING with it?  Heck, she could have even just taken those greens and juiced them.

The report went on to quote that the average monthly food waste costs in the US today amount to $190 per family.  Using this figure, a family would throw away a whopping $2,280 worth of food every year and I would bet that most of that food was still perfectly edible! 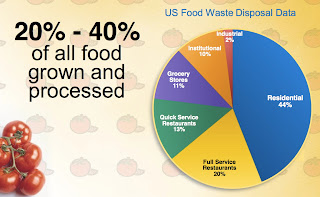 I've seen "experts" say that a family/person should be spending between 9-15% of their income on food.  They didn't say whether that was on their gross or their net income.  Somewhere in that range seems to be the accepted happy place for food spending in the US.  Is your food spending falling within this 9-15% range?
I find this method of figuring how much to allot for your food very flawed.  It might sound reasonable for a family on the lower end of the income scale. But a family with 2 wage earners making over $100K per year?  The lower end of 9% would see them spending $18,000 a year on their food needs or $30,000 if they allotted 15% of income to food expenses.

I'm not making a judgement call on how much families spend on food here.  I get it that people on the lower socioeconomic rung of the societal ladder have to spend more of a percentage of their income on food.....that's just the way the math works.

I'm just saying that if we all were more vigilant on NOT disposing of perfectly edible food, imagine how much of the food we need to REBUY each week to feed our families wouldn't have to be purchased again, saving each of us part of our income.
Now add up that say, $20 a week we throw away, and multiple it by a year of weeks.......the weekly food we waste and don't think it's a "big deal" to our budgets......it starts to really add up to serious dollars.

Serious dollars over the coarse of a year you could have spent on other priorities in your life--paying down debt, socking away into an emergency fund, beefing up a fund so that your next cars didn't have to be financed......the list goes on and on.
I'm not saying to cut down on the type or amount of food you buy.  Just use ALL of what you buy.  Don't waste anything!  It would be like found money(the money you were spending to rebuy the food you let go to waste). Found money to put toward other goals in life!

Stop overbuying food you aren't planning on preparing to save for later(canning/freezing/dehydrating).
Get a handle on portion sizes so you aren't cooking more food than you need for a meal.
If you do end up with leftovers, find ways to incorporate them into new dishes.
Clean your fridge/pantry so that you can find the foods in there that need to be used up by a certain date.
If a food does go bad on you even after all your steps to avoid it, make it do duty in your compost pile(if applicable)and grow something.  Compost is the "saving grace" for food waste.