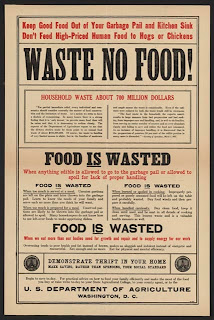 This poster was put out in 1917 as part of a government program to conserve food and eliminate waste during World War I.  Besides feeding the US population, food resources were also needed overseas to feed the troops being sent over to fight.
Herbert Hoover was given the ok by President Wilson to develop this voluntary system that he called Food Conservation.  Hoover wanted to avoid rationing so a campaign to remind people to not overeat, use all food up and not waste anything was started.  The idea of "Meatless Mondays" and "Wheatless Wednesdays" started with this plan.
Hoover was able to reduce food consumption and waste in America by 15% all on a voluntary basis with no rationing!
Not only did the US supply the troops but they helped feed their Allies troops as well.  US farm exports to Europe tripled during and immediately after the war.  The surplus helped alleviate European citizens experiencing a massive post war famine.

I love this line in the poster....."Demonstrate Thrift In Your Home.  Make Saving, Rather Than Spending, Your Social Standard."


Here is what actually got served last week....

As for leftovers rolling into this week--we have 1 helping of Chicken and Dumplings left, Rolls from Christmas and some Taco Filling.

I'll use up the rolls at various dinners, the taco filling goes into the Meat Sauce for the Rigatoni, the Chicken and Dumplings will be my lunch one day.  We have some Salmon and Green Beans leftover from Sunday which I'll eat for lunch as well.  Saturday we'll have leftover from this week--Corned Beef meal, Rigatoni meal and Roast Chicken meal to choose from for dinners that evening.


Needed at the store to serve this lot?
I'll need a head of cabbage, a roasting chicken, both of which are on sale this week.  I'll pick up some fruit too.  The leftover roasting chicken will either form the basis of a homemade pot pie next week or chicken salad for sammies(if I find a deal on apples or grapes).

What's on your menu for the week?  Any good deals in the grocers this week?

Sluggy
Posted by slugmama at 1:33 AM

Email ThisBlogThis!Share to TwitterShare to FacebookShare to Pinterest
Labels: don't waste any food you buy, eat less, frugal meal planning, plan your menu around sales and what you have already, spend your money wisely, use it all up