eBay Follies....Longish but Kind of Funny 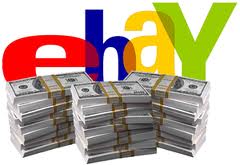 It's been a pretty good week on eBay for me.
Yah, yah, I know....y'all are getting tired of hearing about this, right?lol

While things aren't flying out the door I've been kept busy with getting rid of(selling)things.  In the past 27 days I have listed 140 items.  Not quite the 150 I wanted to get done but it's close enough for me to feel a sense of accomplishment. 8-)

As of this morning, I've sold 49 items and I have a couple of Best Offers to rule on so I might be up to 50 by this afternoon.

Cyber Monday's sales were steady but not frantic.
And then on Tuesday things dropped off substantially.....except when I get something listed, there is a frenzy of questions to seller(and/or offers if I put that feature on an item)within the first few hours of it being 'live' on the site.  I actually sold something within an hour of listing it yesterday.
But unfortunately most things don't fly off the shelf like that. 8-(
eBay is way down from what it use to be like during the High Selling Season of Oct/Nov/Dec.
Ahhhh, the good old days....lol

I've had some really interesting potential buyers this week.

*A woman who bought an item from me about 7 years ago bought something from me last week.  How do I know this?  Because she sent me a long email telling me this, with many details, which jogged my memory and I actually sort of remembered her.  She was nice to deal with back then and still is, but the main thing I remembered about her was that she was very cheap and never wanted to pay for Priority mail shipping and was always trying to get a better deal out of me.  She is still sending me chatty emails and I just don't want to be her friend so I feel bad ignoring her.
That's the thing about eBay.   Some buyers want to have a relationship with you beyond the buyer/seller interchange.  They cross the line from friendly buyer into needy territory......I want your money but I really don't want to be BFFs if I meet you on eBay.lol

*Someone emailed me about a Star Wars action figure case I am selling that is out of production(from 1999)but new in the package.  She wants to replace a vintage case her son had gotten years ago, now that her grandson was using his SW toys, because that old case was falling apart.  She asked me a bazillion questions that the only way I would know the answers would be if I ripped open the sealed package and inspected the interior of said case.  This is not something I would under any circumstances do(unless the person bought it first and PAID FOR IT and asked me to open it before shipping it off).
After those bazillion questions that I couldn't possibly answer, she wanted to know how long would it take to get it without telling me WHERE she wanted it shipped to OR WHAT MAILING RATE she wanted to pay for.

Then to top this all off and push it into the "Seriously, get a clue!" category, she offered me half of what I was asking for it...and I had NO Best Offer feature enabled on the item NOR is my price for this item outrageously high.

Since I am a nice person(most of the time...lol), I answered the 2 questions I could, told her why I couldn't give her more information, told her I wasn't taking half of what I needed for this item and directed her to a listing for a lovely used identical case for cheap and said goodbye.
I could have ignored her or told her to kiss my pastey white a$$ but I've still got a little bit of Holiday spirit left......but it's wearing thin I tell ya! ;-)

*How about two different cases where potential buyers emailed me frantically wanting to know where my listing disappeared to when I sold an item that they had put on their "watch list".  One even demanded that I relist the item so they could buy it!  The nerve of someone else buying it...humph!  Well if you really wanted it, you should have bought it instead of just watching it.
I have never understood why someone puts a Fixed Price/Buy It Now item on a watch list.....it's not like it's an auction and they don't want to miss the end of the auction and bid on it then so they win it.  You just have to hit the button and Buy It idiot.....no auction sniping needed!lol

*The impatient buyers from overseas.  I don't quote overseas shipping automatically in my listing details like I do domestic shipping.  Overseas shipping is a tad more complicated with too many variables to just give a cookie cutter response.  Some items can't go cheap rate(1st Class)due to size or weight restrictions.  And then there are countries where I will not ship to using 1st Class rates....countries with massive corruption in their postal systems(many of which are privately held)where packages regularly go missing and end up stolen.  That would be Italy.....Jamaica......and parts of Mexico to name a few.  I am also reticent to ship to places with oppressive communist or dictator-ish governments.....like some "use to be Soviet Union" countries, China, parts of the Middle East.  If you are in those places you need to wait until you ask me if I will/can ship an item to you and what rate I will allow it to go.
Add in that often overseas shipping is a LOT more anyway than these buyers assume.

I will get overseas buyers who ask me for a shipping quote and then since I don't answer them immediately, they go ahead and buy the item.

I've had one of them last week do this and then pay me without including any extra for the shipping of the item. lol

This week I had a guy buy without finding out the shipping to Italy would be at least $40 since I won't send 1st Class rate to there.  He ended up paying for Express Mail rate for $48!  Heck, I thought Italy was declaring bankruptcy....this guy obviously didn't get the memo yet.;-)
Then I had someone buy without finding out the shipping to China.  I've already had one package returned to me from China that was undeliverable so I am reticent about sending there anymore.  Seems like China actually holds their citizens to the "you can only import certain goods/certain value of items per year" rule.  If someone in China(Hong Kong not withstanding)asks for a shipping quote I remind them to ascertain whether the item is allowed to be received by them.

Another person yesterday in Canada bought an item and immediately paid me.  They chose a random number out of the air and included that much extra in their payment for shipping.  They sent no note or explanation about this payment, including no expectation of which shipping rate they assumed this extra bit of money would buy them.  So now I have to figure out the shipping options quote and email them.  If what they sent is enough to cover the shipping they expect, that's fine, but if it isn't......I have to refund the whole payment and wait for them to send me to correct amount....and I have to email them and hope they see my email and respond in a timely fashion.   That's the thing that gets me.....buyers expect me to instantaneously respond to their inquiries, shipping their package immediately after they pay and post feedback a nanosecond after they pay me.  But when I need information out of them?.....Oh, they are in no hurry whatsoever to respond.  But if their non-response means I can't ship their item and it gets held up for any amount of time, they are hell on wheels bitchy at me. *sigh* lol

But even though eBay selling during the Holidays can be stressful...especially if you are an ethical seller with a conscience who cares about during things the right way....this year I am NOT letting it get to me like I did in past years.
Because basically, I don't give a shit. ;-)
I don't care about my rating....ok, I do care to do things the right way, but if you have a hair up your ass and just want to go on eBay to screw with someone and ruin their Seller reputation to make yourself feel like a big deal(I've dealt with those in the past), I don't care if you leave me unwarranted bad feedback.  The whole feedback system is a joke and has been for years since they took any serious repercussions against Buyers out of the equation but left all the feedback power in the hands of the Buyers.  Sellers can't do anything to a bad buyer.....can't leave them negative feedback.  But a bad buyer can not only leave sellers uncalled for bad feedback but they can ding them on their 5 star rating for something that is beyond the sellers control--the cost of postage/shipping.  If I don't give FREE Shipping(something that I have to pay for out of my tiny profit and more and more buyers are expecting even though I can't write off the cost of shipping like huge corp. like Amazon can)and charge what it actually costs to ship something, my SHIPPING AND HANDLING Star gets downgraded by them.  This star really needs to be called something else since I don't CHARGE SHIPPING, the Post Office CHARGES it. I merely collect it.  And not only that put I get the great honor of HAVING TO PAY eBAY A FEE ON THAT SHIPPING MONEY THAT I DON'T CHARGE OR GET TO KEEP.  AND i GET TO PAY PAYPAL A FEE ON THAT SHIPPING MONEY I COLLECT FOR THE PO TOO.
And yes, I am shouting here.....

So I don't give a rat's a$$ about what my buyers think about my prices.  You buy it or you don't, your choice.  You pay me what it costs and I ship your thing to you.  You want to leave me nasty comments, fine.  Have at it!  I don't care because when I am done selling off my crap I am leaving eBay and it's Black Hearted Business Model far behind.
Cutting ya loose eBay....with a smile on my face(ok, maybe a smirk!)and a skip in my step because I'll never have to endure this again.

Yah, I'll miss the funny buyers and shaking my head at the "WHAT were they thinking!?!?" buyers but I am retiring as a Master Shipping Box Reconfigurer.
I'm hanging up my postal scale, tape, yardstick and scissors after this last hurrah.