Just a few pictures of our Christmas eve and day.... 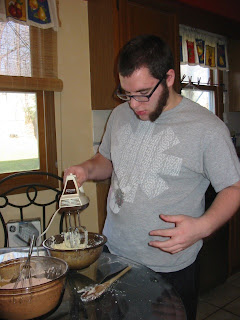 My son, who just became interested in learning to cook, making cookies for his girlfriend.  This is his first encounter with an electric mixer.  We avoided flour/cocoa powder flying to the ceiling when he tried to run the mixer with no wet ingredients in the bowl.  We also learned the hard way how to stop the mixer before taking it out of the bowl.  Important mixer rules you know.....

He was making something he'd never made before to give as a gift.   When I found this out, I impressed upon him the wisdom of NOT making something for the 1st time if it had to be perfect/right/edible.
Men......lol 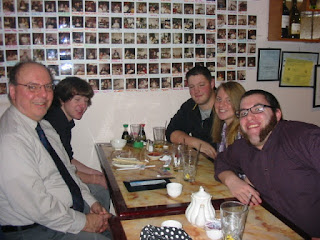 Here is our intimate Christmas eve dinner at the local Chinese restaurant.  We had the place to ourselves this year until we were nearly finished eating and a couple came in.
At least my polka dot handbag made it into the photo.  Why does no one else ever volunteer to take the photos?
And no, the family wouldn't let me drink sake or sing "Deck the Halls" there. 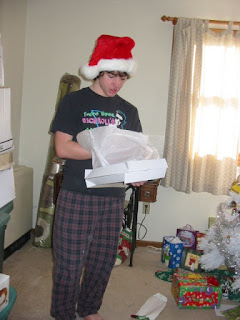 Which brings us to Christmas morning. 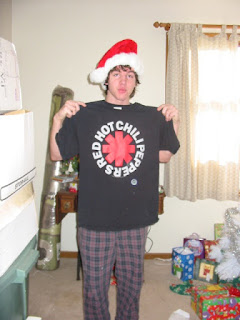 #2 son opening, and with his most wanted Christmas item(besides cash).  You would think THIS would illicit a smile?? 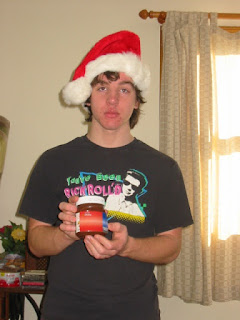 Even a $50 gift card taped to a jar of Nutella(he is an addict)couldn't get him to smile! 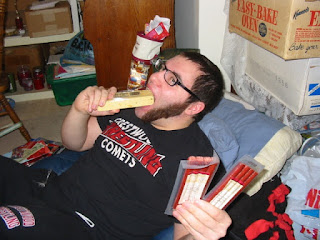 #1 son cramming a block of Jalapeno Jack Cheese into his pie hole, whilst holding Beef Sticks.  The way to this guy's heart IS through his stomach..... 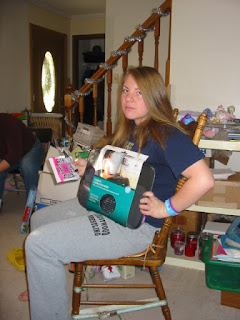 Daughter showing off her new laptop cooling mat from her Aunt and Uncle.  Geez, I dare any of them to smile! 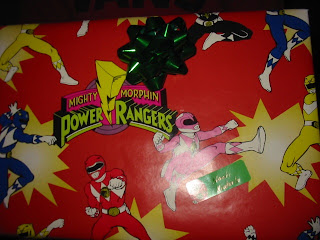 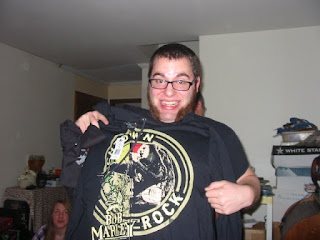 #1 son feigning joy and surprise at his new hoodie Santa brought him(because he went to the store with me and picked it out 3 days earlier before I wrapped it and stuck it under the tree). 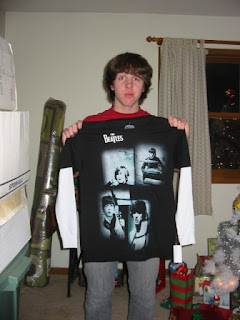 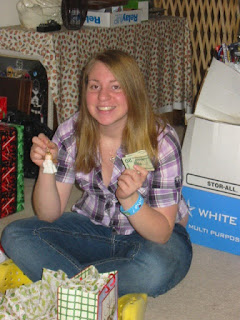 And this gift of CASH from her Aunt finally got Daughter to throw out her face muscles and give a smile....success!
Cash is king in her world, at Christmas and every day. 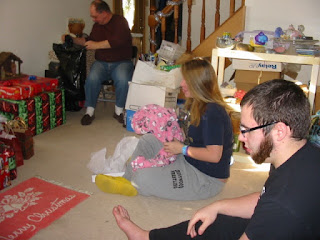 Waiting not-so-patiently for the Santa-of-the-Day(played by #2 son this year)to give out more presents.
We open presents one at a time so everyone can see and enjoy them.....or just to torment my kids if you ask them.lol
That door mat/rug in the photo is about 50 yrs. old.  It was at our front door every Christmas that I can recall growing up.  I put it in front of the tree now to keep it from getting dirty. 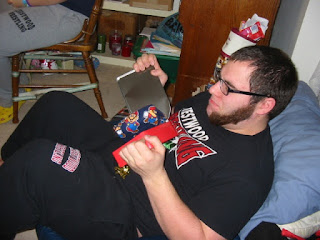 #1 son getting a silly gift of Mario underwear.  It's silly yet functional and useful....just like him. ;-) 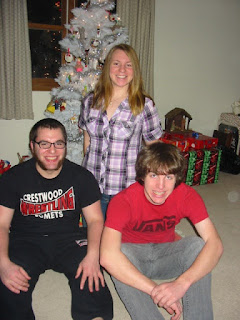 Ok, I lied.
I DID get a photo with them smiling.  They are even sitting in close proximity without complaining that someone is too close or is touching them.
Will miracles ever cease?!?
Of course, this photo had to be taken BEFORE I let them open anything or go through their stockings.
Once I didn't have Christmas presents to hold over their heads, the chances of getting a photo with smiling faces was nearly nil.
*sigh*

I hope your Christmas was everything you wanted!

Sluggy
Posted by slugmama at 11:25 AM

Email ThisBlogThis!Share to TwitterShare to FacebookShare to Pinterest
Labels: Christmas celebration, kids with presents, my family photos at Christmas