Bopping Around My Christmas Tree.....Come Look!

I finally corralled the fandamily and got them to put ornaments on the Christmas tree last Sunday night.

I sat and took pictures and supervised.
Yah, that's what I am good at....supervising.  You know....telling everyone to put it to the left, or to the right, or on a different branch, or change the hanger wire from a green one to a silver one because God Bless Us Everyone, we are using the white tree not the green one this year!
What would they do without my Great Help?!?!? 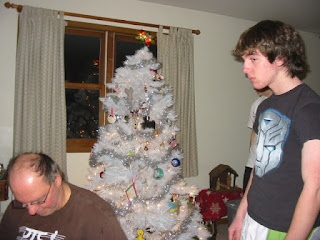 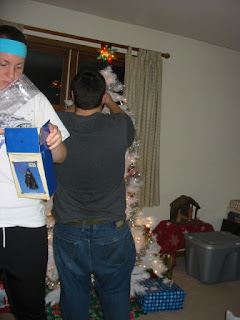 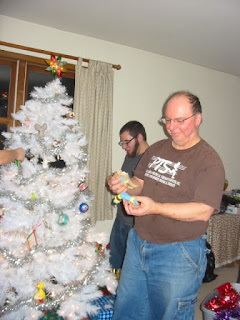 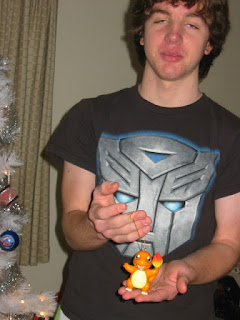 I let the kids and Hubs put up the ornaments.  This generally means we have TONS of ornament from when the kids were little-- homemade/crafty ones from Pre-School and such when their manual dexterity was questionable(which I love!), the ornaments from when they were born, and things like what you see in #2 son's hands above....Big Bird, Dudley the Dragon, Thomas the Tank Engine, Cat/Dog and Pokemon!
Yes, nothing says Christmas like a Furby ornament on the tree!lol

And then Hubs will put up about 3-4 ornaments as his contribution.....all baseball themed.

Then after they are done and leave, I get to move things around and fill in with a few ornaments from when I was a kid or ones that have been gifted to me.

Since we have bought tree ornaments every year, from 1 to 8 or so each Christmas, since we were married in 1982, we have way more ornies that we can fit on the tree at one time.  So ornies seem to go into rotation now and only a few reappear every year.

And last year, after we went to Virginia and retrieved all the family ornaments my mother kept, that had been hidden away in my oldest brother's attic(where they have been since she passed away in 2000), I now have even MORE ornaments to deal with!
I know that once my 3 kids set up their own households I'll have plenty to divide amongst them.  Instead of fighting over who gets which, they'll be fighting over who has to taken MORE ornaments!lol

Now if you thought I was a tad on the OCD side with organizing, I give you my mother's ornament box...... 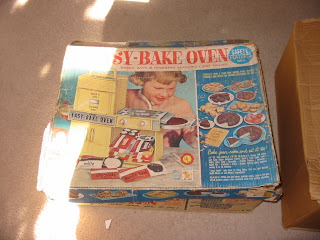 No plastic store-bought ornament storage box for her!
The box from my Easy-Bake Oven I got for Christmas when I was 7 did just fine.

Inside she labeled the ornaments.... 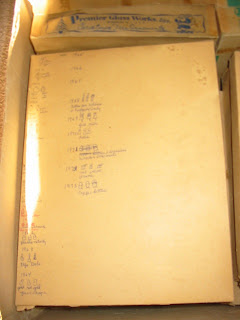 Not only a name for each ornament but the year she bought them and a drawing of what each one looked like.
And even some really old glass ornaments from her mother, my grandmother & grandfather's tree dating back to when they married in 1930. 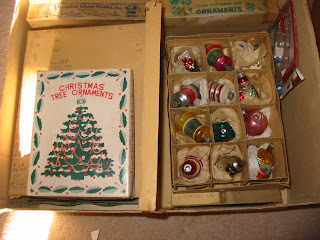 And here is a tour around our Christmas tree this year. 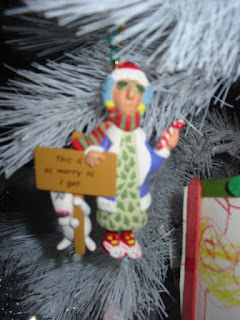 Thankfully the Mets actually won the World Series back in '86 so we could have this beauty on our tree.... 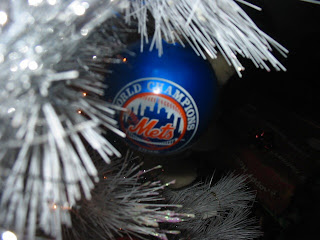 This one we picked up last summer during our latest trip to Maine.  A moose in waders holding a lobster says it all for me. 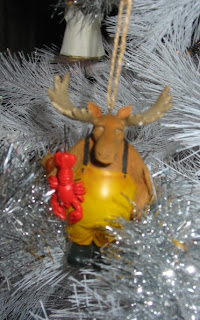 This felt mouse was made by my mother when I was in grade school.  The PTA ladies made Christmas ornaments to sell at a school bazaar.  My mom made these as well as Lions and some other critters. 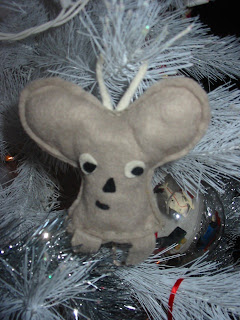 This is a teeny tiny plastic Nativity scene.  We have about 5 of these.  When I was in 1st grade we had to sell Christmas stuff for a school fundraiser.  I had this ginormous box of paper, tags, cards and little tchotchkes that I had to haul from door-to-door to sell.  The nuns nagged at us every day to get out there and sell, sell, SELL!!  What a bunch of pushy broads....
I don't recall the dollar amount I sold but I remember it was a large sum in my 6 year old brain.
I turned in my bulging money envelope and had visions of a big BIG prize as a reward.
The prizes were lined up along a big table from smallest value to the big prize-a bicycle!
The fundraiser nun tallied up my coins and pointed down to the end of the table to the last 2 or 3 items.
For all my efforts, I had enough points for these 5 teeny nativities.
I bet nobody earned enough to get that bicycle.  It was just a visual "come on" to get you to sell more every week you walked past the table and drooled at it.
Nuns in my past often weren't totally straight with you.  It reminds me of the time Hubs and I worked the Festival at the local Church and I manned the "Pick a Ticket" booth.  The "come on" I was suppose to use was that if you picked a ticket that ended with "00" you were suppose to win a prize.  But not every ticket that ended with 00 was associated with a prize.  Long story short, there was deceit involved and it left a bad taste in my mouth....but that's another story for another time.

I was sorely disappointed in my prize.....but my mother kept them for all those years. 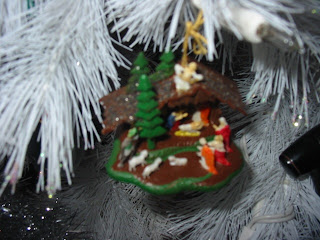 Then we have this beauty from my Daughter's pre-teen years..... 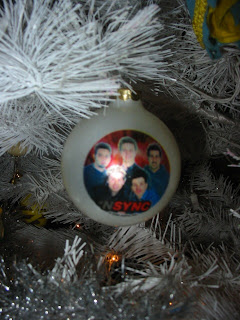 And then we have ornies with photos of days gone by in them..... 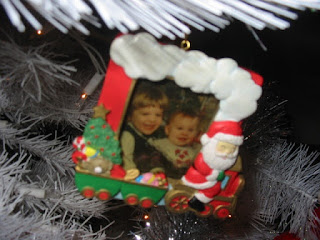 And after holding 2 Toiletries Sales this summer, I had to put this one on the tree.... 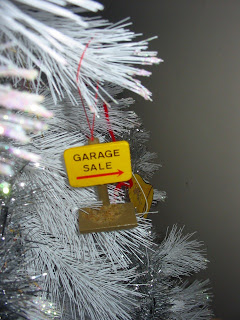 Here's one I made back before I had kids.  I made crafts and sold them to shops and at craft shows. We had gotten some sand dollars down at the beach.  I painted them with pearlescent white paint and added red stain ribbon and bows.  Easy and classy looking.... 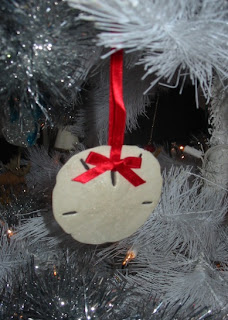 Along with my mom's box of ornies was a smaller box of ornaments my brother had saved.  Most of them were ones I had gifted to him over the years.  Here is one from a set of fabric stuffed Santas I had made him while in high school.... 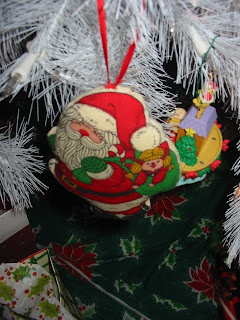 And here is an ornament my mother made for my Daughter when she was very small. (It's hard to see some of it because of the angle.) My Daughter's nickname was "Slugbaby".  My mom got an empty ornament ball and filled it with a paper angel looking over a slug.  Since she lived far away from her grandkids, the Angel was Grandma watching over her Slugbaby. lol 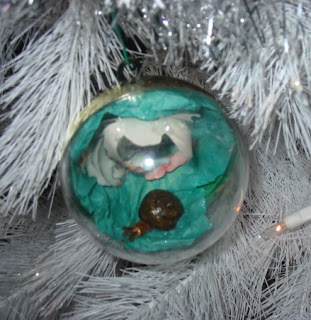 Here is one of my favorite ornaments.  My oldest son had problems sitting still in school when he was very small.  He wasn't ADD or ADHD but he was ACTIVE and had no patience for cutting, gluing, coloring, etc.  This is one of the 1st ornaments he every made.  I think someone else cut out the snowman shape but he hacked up the paper to make the mosaic design.....and I am sure he had a story to go with why the snowman needed a third eye.... 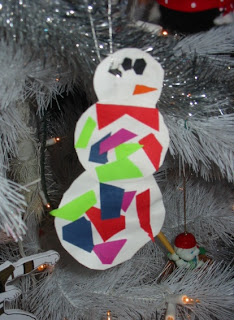 And of course, Spider-man is right at home swinging among the branches..... 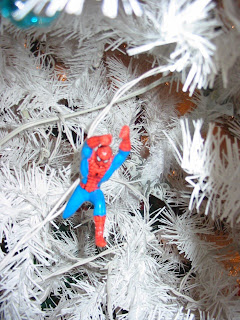 And Spidey has foes lurking within the branches.......use the force Spidey, the force! 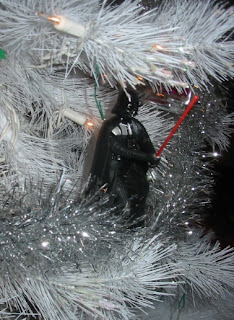 Here's another school craft my mom made.  These dolls are cardboard form and fabric scraps, yarn hair and you Mod Podge it all.  Very homemade looking but cuter than it appears in the photo.... 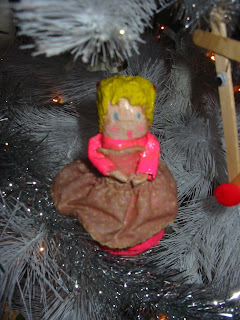 This is an ornament I bought my mother from a fellow vendor back in my Craft Show days.  She made beautiful blown egg ornaments, decked out with decals and rhinestones and about 20 layers of sealant.  There are little metal bells hanging from a chain below the egg. These were quite exquisite and cost me dearly back when we didn't have much money.  I didn't even buy myself one back then.  But now I have my mom's. 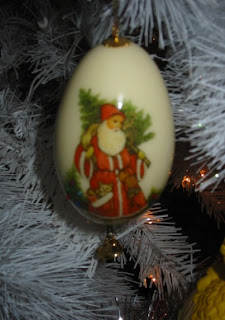 And it just wouldn't be our Christmas tree without at least 1 Power Ranger..... 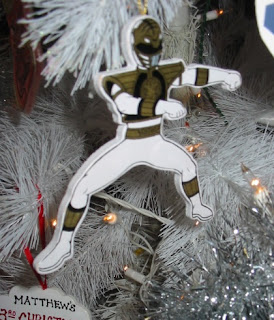 I am off now to make some new Christmas memories.

We here at Chez Sluggy wish you and yours a Merry Christmas, Happy Hanukkah, Blessed Yule or whatever Holiday you celebrate.

Sluggy
Posted by slugmama at 1:39 PM