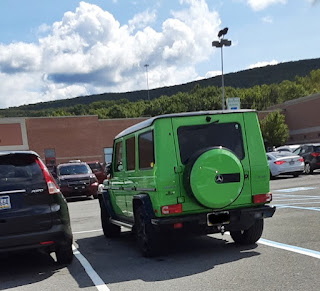 Saw this ugly car in a Target parking lot in the last month or so and had to take the photo.  Not only is the color weird but it's a Mercedes Benz Jeep looking thing of some sort(a G Class SUV I found out later).  This thing costs $131,000+!  That's more than we paid for our first house and almost as much as we paid for our current house. lol
I know everyone has their own style/taste(I actually like the color)but seriously?  Who needs a $100K+ vehicle?  And who are you trying to impress with it??
Onward to the meal planning!
This is what was planned--
1. Sunday--Breakfast for Dinner
2. Monday--Homemade Pizza, Salad
3. Tuesday--BLTs
4. Wednesday--Apricot glazed Pork Chops, Acorn Squash
5. Thursday--Meatloaf, Mashed Taters, Veggie TBD
6.  Friday--Korean Beef/Veggie Stir-Fry w/Noodles
7. Saturday--Leftovers or FFY
And this is what really happened.......
1. Sunday--Breakfast for Dinner
2. Monday--Applebee's salads
3. Tuesday--BLTs
4. Wednesday--Fend for Yourself
5. Thursday--Meatloaf, Acorn Squash
6.  Friday--Fend for Yourself
7. Saturday--Leftover Beef Pie
Almost half of what I planned didn't happen last week.   We had so many leftovers to use up so why make new?
What got put into the freezer last week....
* 2 containers of ice cream
What got taken out of the freezer and used...
*  1 roll breakfast sausage
*  1 package of Pepper Bacon
*  1 Meatloaf(thanks Sissie!)
I spent $69.18 on food/toiletries/HBA last week at Walmart, Weis, the Bread Outlet and Ollie's. This brings our food/toiletries/paper goods Grand Total so far to $121.62 for October.
There are 13 shopping days left in October.
I've earned $69.86 on Ibotta in October.
I've earned $3.64 on Checkout51 in October.
I've earned $5.25 on Coupons dotcom/Paypal in October.
I've earned $4.00 from Aisle.
I've earned $3.27 from an ice cream offer.
I've earned 1023 points from shopping on Fetch in October which equals $1.02.
I earned 1875 points from food shopping on Shop Kick in October which equals $7.50.
I've earned  9008 SB from food shopping on Swagbucks in October which equals $9.00.
That's $85.94 in rebates(not counting the Shop Kick/Swag Bucks/Fetch)on $121.62 in grocery spending so in reality it's $35.68 spent after the 4 rebate apps(+the ice cream offer)I count until I cash out on the other three apps. 8-)))
My savings percentage for the last week was 60.35%(without "regular" Rite-Aid trips)and the monthly savings total for October comes in at 50.29% so far.(w/out R-A).
Leftovers going into this week....nothing but some meatloaf and 1 helping of squash.
Here is this week's "food plan".....
1. Sunday--Chinese take-out
2. Monday--Homemade Pizza, Salad
3. Tuesday--BLTs
4. Wednesday--Apricot glazed Pork Chops, Green Beans
5. Thursday--Pasta w/Meat Sauce, Salad
6.  Friday--Korean Beef/Veggie Stir-Fry w/Noodles
7. Saturday--Leftovers or FFY
What do I need to buy to fix everything on this menu?  Nothing.  I just have to dig stuff out of the freezer really.  Still no Ibotta Bonuses as of Monday morning so no reason to hit Walmart unless I see a freebie there.  Weis prices are getting outrageous so I won't be going there either.
What is getting fixed and served at your house this week?
Was last week's plan successful, did you go off plan or did you not even plan what was going to be eaten last week?
Any great deals on food at your stores this week?
Sluggy
Posted by slugmama at 9:55 AM