How Not to Do It


Well I had a plan but circumstances thwarted my plan and then bonehead moves made by ME just made a bad situation even worse.
Yet this is a happy ending when all was said and done. 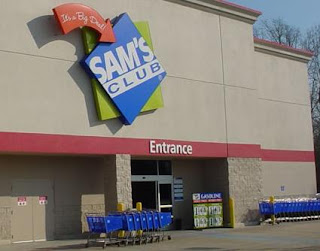 What I am talking about is my Sam's Club account and credit card.
September 2014 I dug out a free membership card I received years ago in someone's blog giveaway and decided that it was time to cash this in for a free year of Sam's Club.

So I get to the store and somehow got talked into not getting my free regular account but paying extra($50 more I believe)and getting the super deluxe account that came with a Sam's Club Mastercard.  This meant not having to carry cash to Sam's to pay each time but the convenience of being able to swipe plastic at the store and then pay it off during the monthly grace period.
Remember that no matter how bad I botched this deal up, I always paid off the card each month, so I never paid any interest charges.
I just paid $50 in stupid tax by actually being talked into upgrading the membership. ;-)

So I was instantly approved for the Sam's Club c/c and they charged the additional $50 in membership fees to that card.
I was told two features with this account and the linked c/c were--
1. I got points toward a store reward when I paid for anything with this c/c.
2. If I decided at any time before the year's membership was up that I no longer wanted to be a Sam's Club member I could cancel on the spot and get my whole $100 membership fee refunded to me....so basically it was a year of Sam's Club for free.

So I swallowed this hook, line and sinker and was sure I'd cancel before the term was over and get my $$ back.
Hahaha! 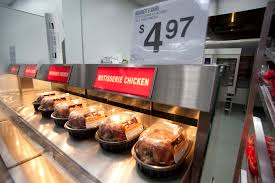 First off, it became fairly clear after 3 months or so that Hubs and I were at a point in our lives where we really didn't need/want to buy most items we use on the regular basis in massive quantities, which is mostly what Sam's Club is about.  Most goods(except for clothes, electronics, rotisserie chickens, pharmacy drugs, glasses, toilet tissue, etc.)are sold in large packages.  Other than bottled water and maybe fresh meat or fish(which we could freeze the extra)we didn't need huge quantities of what they sold/how they sold it.  Even buying frozen foods, since it was such large packages of items there was no way to fit it all into the freezer and who wants a freezer filled with Marie Callendar pot pies ONLY because all that packaging takes up a lot of space(even though MC pot pies are so tasty)?!? 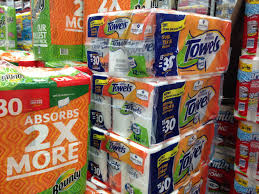 So this way of shopping may have worked out for us when all the kids were still home, living under our roof but for 2 people with a teen left at home(and only home on college breaks and during the Summer), this situation doesn't lend itself to this form of hunting/gathering/shopping. 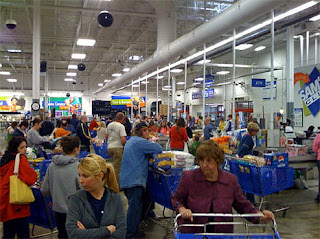 Lines for days no matter if it was a weekday or weekend.

By August I noticed that we had only used this membership sporadically.  Reasons why were because it was not convenient(you had to drive down the mountain into the city), it took a long time to shop there(because the store is massive and always crowded with long lines), and the having to buy large quantities too.
And just to drive this point home(that we never used the membership), I received my FIRST c/c reward in August(almost a full YEAR since signing up for the c/c and using it at Sam's Club).  It was for $10.  Meaning in almost a year I only spend $1000 in Sam's Club-and 1/5th of that spending was buying a chest freezer.

So it was decided to cancel the membership before mid-September when that first year was up.

But then my foot problem happened in early September and I was unable to get to the store to cancel the membership since I couldn't walk.  (As the membership was in my name only I had to be the one to cancel it).
Sigh.
So I kissed my potential $100 refund goodbye. 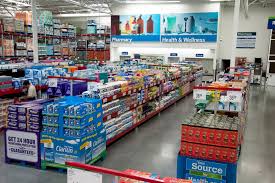 I made plans to go in to cancel the membership anyway as soon as I could walk well enough to get to the store.
While being laid up and confined to my bed I checked my Sam's c/c account online and saw that they had charged me for another year of the premium level membership to my c/c.
Whoa!
I saw red and did a very irrational thing at the sight of this charge, which I had never authorized them to make nor did I know that this is the way they do it if you have their c/c.

I cancelled my Sam's Club c/c by clicking on a link from my computer.
This was just the WRONG thing to do I was soon to find out.

So a week or so after doing that I was able to hobble into the store and cancel my membership.
The Customer Service clerk swiped my membership card and saw I had I had been charged on the c/c for next year's fee so she called the c/c number to get my $100 for next year removed from the c/c.
Only she was told that since I had already closed out the c/c account that they couldn't remove it.
WTF?!?

What I had to end up doing to cancel the memberships and get my money back was the biggest PITA known to man.
First off, they couldn't cancel my membership at the store.
I had to PAY that $100 charge! ack
Then once I saw the payment had cleared(after 3 days)I had to call the c/c 24 hour line and cancel my membership.
Then I had to wait 3-4 days and see that I had a credit of $100 on my now closed c/c.
Then I had to call the c/c 24 hour line back AGAIN and request a refund for that $100 be sent to my mailing address.
And of course every time I called that c/c line I got a "Ron" or a "Cindy" in a call center somewhere in New Delhi who either I couldn't understand or they couldn't comprehend what I was asking them to do(as it usually confused them to no end when they saw my c/c account was already closed at my request).

Needless to say I lost $50 on the first part of this deal but I was victorious on the second part and did receive my $100 check from Sam's Club last week, 3+ weeks from when this whole shebang began... 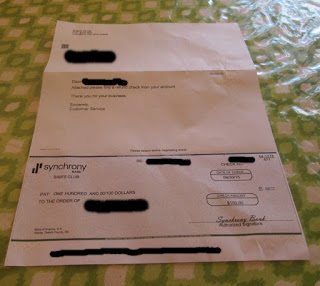 So excuse me now so I can go put this check back into my bank account.

And take a few lessons from my mistakes.

Sluggy
Posted by slugmama at 8:47 AM