Since we got more than halfway to our destination on Day 1, Friday, Day 2 was taken at a more leisurely pace.

I realized that our timing was impeccable by the way, staying overnight on a Thursday rather than a Friday.  Our hotel room was about $70 before all sorts of taxes were added but had be stayed there on a Friday night the room would have cost $200 before taxes...Yikes!!

I guess the rate zoomed up because of Notre Dame playing a football game that weekend.  What a rip! 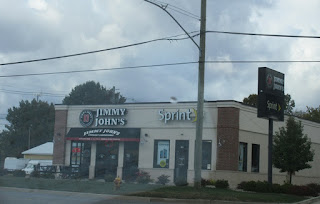 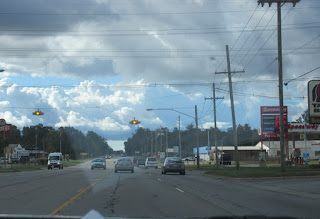 We drove down back toward the Indiana Toll Way to South Bend.
Anyway, on the way out of the Michiana area we stopped at a....you guessed it!.....liquor store.  8-) 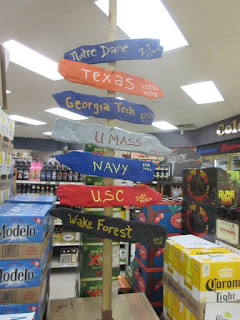 You knew you were in a college football playing town right away in this store.


I love the sense of humor some of these craft brewers have when naming their beers.

Kentucky Ryed Chiquen, complete with a chicken feather under the top seal. lolz 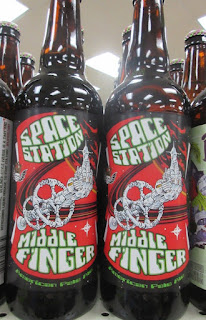 After buying of few things we headed west into the "Land of Lincoln".
There was a stop at a World Market to buy a few things, mostly Christmas gifts.  Alcohol may have also been purchased but I'll never tell.

Then feeling puckish we found a nearby café for lunch in the shopping plaza where the World Market was located.

Hubs got a turkey sandwich and I got a roast beef sandwich.
Take a look at the difference in sizes between those 2....... 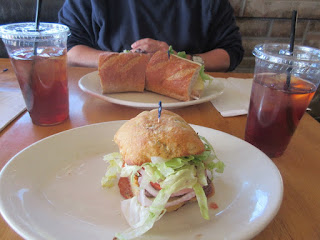 I was going to suggest we get 1 sandwich and split it before we ordered.  Well it's a good thing I didn't say it out loud in regard to getting my selection and splitting it! lolz

If we had done that, we would have had to stop again for another lunch before hitting Sonya's house.

We hit a little local traffic after having lunch but we pulled into Sonya's driveway a little after 4pm.

I got out of the car and when she opened the front door I yelled across the yard wanting to know if she had found me a FISH FRY for dinner.

Yes, I was all hyped up on wanting to have FISH on Friday up here in IL.  Two years ago I had the BEST Fish sandwich of my life on a Friday after we left Sonya's house and drove down to Mendota IL to have lunch with Pam and Robin(online friends from my beanie days).
We had Walleye that Friday and it was the first time I'd ever had it and man, was it good!

Since we were coming into town on a Friday I told Sonya to look up some places for dinner that have a fish fry.  She seemed kind of lukewarm on the idea on the phone so I did some research and found a place that served a fish fry just over the border in WI near her town.

So after downing a drink that was thrust into my hand after I got inside the house(why does this always happen at her house?!?lol)we set out with Den driving to go eat some fish.

Remember how I nearly got 3/5 of my family murdered in a biker dive bar back in July in VA?
Yep, this would be another great dining choice.....
I just seem to know how to pick 'em, don't I?

This place was a hole in the wall locals bar and we sure got the once over by the clientele sitting at the bar when we walked in.  I thought for sure I heard banjos playing in the distance too.

I thought Sonya was going to bolt back out the door until she spied gaming machines in the back corner.  Unfortunately they were "play" machines and you couldn't actually win money on them so her glee turned to despair right quick. 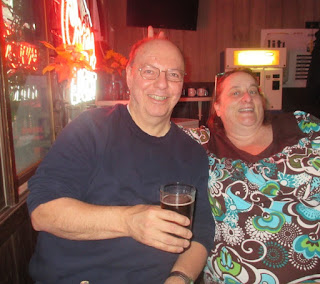 So we ordered our meals and chatted and laughed before the repast hit the table. 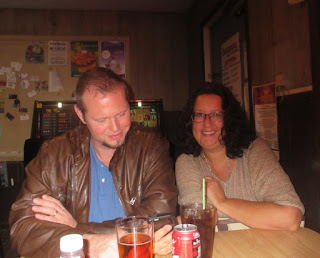 I swear this is the only photo I got of Den the entire time we were visiting!  The man had an uncanny knack for avoiding my camera.
Sonya Ann was not to be so lucky however......much to her chagrin.

This is one of the lovely pictures adoring the wall at Grumpy's Pub and Grub. 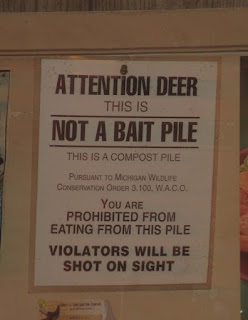 The food arrived and we wolfed it down.  Den unfortunately chose the only "All You Can Eat" fish option(cod)and it turned out to be the premade/frozen/breaded type.  Hubs and my fish plates were freshly prepared however and were very good.
so what did Sonya Ann order in the land of fishy goodness?
A BLT.

Ok, so that's why she said, "We don't go out for fish." on the phone when I requested a fish fry and she didn't seem too thrilled with Grumpy's(after the gambling was a no-go).

Some woman(the owner, bartender, patron....who knows?)came over after we were done eating and offered us each a cookie out of the box she was holding.
So we got free chocolate chip cookies with our meal....score!

Then the bill came and Den tried to give the waiter his credit card.
And then this happened........


Figures! I'd pick a place that was seedy and only took cash....lol

So we go back to their house and as they say, "the hilarity ensued". 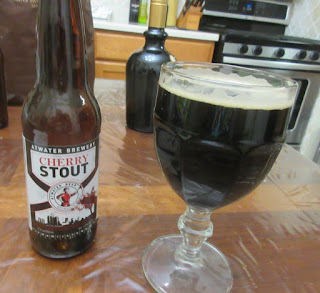 Just one of the beverages imbibed that evening.

I should have filmed Sonya Ann taking out the recycling the next afternoon.  It looked something like this....... 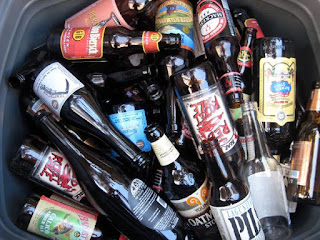 Next time we should try this with all our empties....

Sluggy
Posted by slugmama at 3:54 PM

Email ThisBlogThis!Share to TwitterShare to FacebookShare to Pinterest
Labels: October trip to IL