The Hard Hard Road of The Artistic Student

*The post where I ramble on ad nauseum about education, debt and the arts.*

#2 son finished up with school for the term last month.
His grades for the year?
Maybe I shouldn't go there.lol

It was a mixed bag of A's through C+'s.
Besides French which he loves and puts a consistent effort toward and gets A's, every other academic subject ran the gamut from high to low marks.  It's not like he has certain subjects he struggles with, since he managed an A at some point in the year in every course.  He just can't sustain interest enough for an entire year to give a crap to do well.

His older brother had certain subjects he had to work harder at throughout school.  He always had to work much harder at math and foreign language, but subjects like history and literature came much easier for him.

His sister sailed through with A's on everything, until this last year in which Physics kicked her in the ass.  She says the teacher was inadequate to the challenge of teaching this subject and from what others have said and her classmates have said, I tend to believe that some of that C+ she earned in Physics was NOT all her fault.

Anyway, if you have more than 1 child, you know that they each learn differently and perform well or not so well in a school setting.
#2 son has had a totally different learning/schooling trajectory than either of his siblings.
I am taking pause on how to approach/encourage/guide/threaten him to maintain a high level of effort in his academic subjects.

Hubs is/was an intellectual.  He went on a large merit scholarship to Johns Hopkins University.  He got his MA from the University of Virginia and was going on to get his PhD there as well.  His plan was to become a tenured professor of Medieval Literature at some high falootin' prestigious University.
As Southern comedienne Jeanne Robertson says, he is a "left brain" man and he was on the way to over degree-ing himself.

On the flip side of his greatness, Hubs can barely dress himself and he'd starve if I wasn't here to feed him.  He was writing checks for cups of coffee when I met him in college but couldn't balance a checkbook.

I was not a stellar student in high school.  I did well in the sciences & history, got through the math but I excelled at all the art subjects.....art, music, drama, dance and literature.   I went to a small expensive Women's college nearby Hub's Johns Hopkins U.  I was not an academe but I did well in my studies and had a blast doing many of the arts for 4 years.  I learned a lot but nothing there prepared me to get a job in my field that would pay enough to support me.  Making the connections in the field of my choosing during the summer and after college was the more valuable thing I achieved.  Luckily, my 4 years of college didn't leave me with loans I would be ill prepared to pay back. 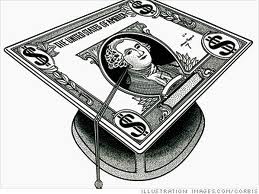 #2 son is an 'arts' kind of guy.   And for me, unless you are one of the rare artistic type people who has the talent to make it 'big', college may not be the best choice for you if you don't have cash ready to pay for school or at least the bulk of the costs of it.

Yes, colleges have tons of programs for the arts.  And some of them are highly regarded.
But unless you are attending one of the prestigious schools with an equally prestigious arts program
you might want to rethink attending with the help of large student loans.


Don't get me wrong.....no one's schooling is EVER a waste of time!  And you will benefit from college in many ways and you may actually refine your artistic skills and be able to land a job that supports you.

But with the kind of income the arts person will see over their lifetime, the arts person who isn't at the 'top' of the talent/skills for the profession, they will have a hard time paying back all those loans on top of supporting themselves on their income level unless they hit it lucky.  There use to always be the fallback profession of teaching the arts for the artistically inclined graduate if other jobs didn't pan out.  But nowadays with the cut backs in education, the arts are the first types of programs to get the ax.
I'm just saying that if you need to go into massive debt to attend school in an arts field, you really need to think hard about being able to earn a living in that field that will let you also pay back all that debt.

Most arts students would be better off, instead of going to that expensive college with an arts program they can't afford w/out large loans, to live at home and taking classes at a community college along with finding work or internships in their career field to do simultaneously.  You don't necessarily need a school setting once you have mastered some basics to learn your craft in the arts.  It's more about practicing, honing your skills and forging the connections that will get you work.  My best advice is to find a mentor in your field and etch everything they say into your brain!  Hounding and picking the brain of someone you respect in your artistic field and getting some unpaid on-the-job experience might be the most useful and cheapest education you will find.

The arts community is rather small no matter which artistic discipline you go into.  In this line of work, it really is about who you know and making a name for yourself among your fellow artisans.  Artists tend to recommend people they know and have worked with in the past...unless they let their egos get in the way, but that's a whole other topic for another day! ;-)

And the questions #2 son needs to start addressing....
Will he be able to sustain his livelihood in an artistic field?
Will he learn a 'back-up' profession so he has something to fall back on if the arts gig doesn't work out?
Or will be have to get a 'real job' and practice his art on the side either paid or unpaid?

Life can be so complicated for the artistic soul!

So tell me about you or your kid(s).....
Did/do you earn a living in an arts field?
Did you go to college and major in an artistic discipline but don't earn a living in that field?
Where you talented in the arts but didn't follow your heart?
And do you regret that you didn't pursue your passion?

PS-All opinions here are my own and you are more than welcomed to disagree with me. 8-)

Email ThisBlogThis!Share to TwitterShare to FacebookShare to Pinterest
Labels: college arts programs, fallback career, helping an artistic child find their way, taking out large amounts of loans for an arts degree, will your arts degree give you a career that supports you