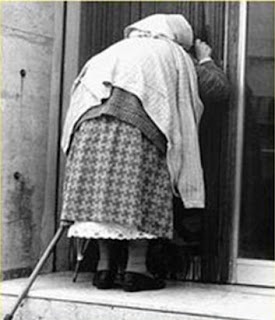 Last year, when I began researching the cost/probability of replacing our heating system with a geothermal system, I realized that it made little sense to spend the money to do this since we wouldn't be living here long enough to recoup the expense of said system.

All I can keep thinking is, "How did being near retirement age sneak up on me"!?!?

One day I am dealing with a Husband, 3 kids, 4 dogs and life as a suburban Homemaker and I turn around and I'm 52 years old with only 1 kid left at home fulltime, 2 dogs and a husband who is planning on retiring in 7 years.
Wow!

Other than throwing money into retirement/investment accounts before I get the Hubs paycheck every other week(for the last umpteen years), and glancing at the statements that come in the mail quarterly, we haven't sat down and actually crushed any numbers or figured out how much we will have or need to live in retirement.

Hubs use to tell me offhandedly that he wanted to retire at 55.  He comes at that age due to his father, who was a laborer, who worked until he became physically disabled in his 50s.  He was forced to retire in ill health/pain and never got to enjoy his old age fully.
Hubs wants to leave the rat race while he still has his health and wits about him.
And I so get that.

But I didn't pay him much heed when he started spouting off about retiring, because well, geez, 55 is a long way off, right?
But it's here now, knocking on the door and I am not wanting to open that door and let Mr. 55 in!

Then after the last few years of Recession/Foreclosures/Bank Bailouts/Stock Market Dives, Hubs stopped throwing around that 55 number.....especially after our investments took a nose dive in 2008/2009.
Last year he started making noises about retiring at 60 instead.  He said he ran some numbers and with the hit we took in our savings(even with the rebounds lately), he feels secure about making age 60 his new retirement number.

Besides figuring out the savings balance, I am more comfortable with 60 than I was with 55.  Mainly because at 55 we would still have a child in high school and one in college.  So the kids would still be dependent on us for financial support.  Kids + No income=Bad Planning  8-(

So I want to ask all of you dear readers.....
1.  How many years from now do you or does your significant other(if that applies)plan on retiring?   Is it a 'historically normal' retirement age or do you plan to retire early?  Or is retirement going to happen the day you can no longer physically work or drop dead?

2.  And when you retire, do you mean stop working fully?.....Or getting different job--one that is parttime and/or pays less but keeps you active?....or a job that you love?

3.  Besides Social Security benefits, are you putting any money away for your retirement?

4.  If you were to retire, in today's dollars equivalent, how much money do you think you would need to live on for 1 year? (Don't include the cost for major medical care(other than prescription meds and normal preventative care)in this, just the amount you would need to cover your normal living expenses in retirement with no one to support other than yourself and your spouse, if you will have one.)

Yeah, I know this post is pretty much a downer with all this death and running out of money talk?lol
But I am very curious to see how other people are planning for retirement and what they think about entering this stage of their lives.

Sluggy
Posted by slugmama at 4:18 PM