My Neighbor or Putting UP with the Joneses....

As I have mentioned before, the guy who lives across the street from us has owned a big ass 5th wheel RV for most of the 10 years we've lived here.
It's an eyesore!
Not that it's a broken down piece of junk or anything.....it's just that this huge  metal box sits parked in his not very long driveway....
All.
Year.
Long.
It takes up the whole driveway and they barely have room to squeeze their 2 suv/trucks into the driveway next to it.
To say it's visual clutter is an understatement...... 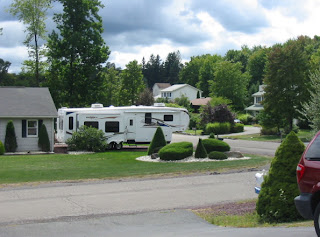 And here is the improved view when it's not parked there..... 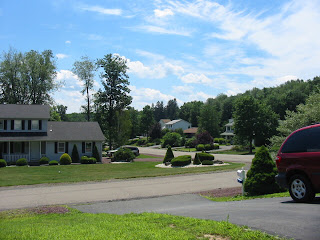 I should say it sits in their driveway except for the scant 2 weeks a year they take it out somewhere and stay in it....if they take it out for that long each year!
I know they never take it far away since often while they are 'gone' for the 2 weeks, the husband will appear at the house to get the mail or something.  I know he's not driving home from a far distance to do this and then drive right back to wherever the RV is parked.


Even though we are on a hill, I feel like that big cluttering monstrosity blocks the sunlight and makes me feel claustrophobic when I sit out on my front porch since I can't see down the road beyond that behemoth.

It's like having someone's house sitting right on the edge of their property, since you can see no sunlight between the garage and the RV, and the RV ends maybe 2 feet from the side of the road at his mailbox.  Heck, when he puts his garbage out each week, it sits at the end of his driveway and the front end of the RV overhangs the bags of garbage.  God help the sanitation worker who forgets to duck when he/she goes to retrieve his trash......

So anyway, for 2 weeks out of the year, I am blesses with clear sight lines and not having to look out at the ugly ass huge hunk-o-metal of a vehicle.  Every year, my soul gets sad when they bring it home to sit for the other  50 weeks of the year.

Why don't they store it somewhere...you know, somewhere appropriate, with other overgrown toys of it's kind?  I bet it gets lonely and feels unloved most of the year and would be much happier playing with it's own kind.

If they can't afford to store it somewhere appropriate, they could at least park it in their backyard, which they never use anyway....or at least store it lengthwise on the other side of their house so it's not sticking out like the big ugly sore thumb it is in my visual life.

So I got excited this summer when the Behemoth RV disappeared and was gone for 4 WEEKS!
As week 3 and then week 4 passed a small glimmer of hope grew in my being.....a glimmer that maybe it was gone for good, or at least gone from the driveway where it sits for 351 days out of the year.

But, my hopes were crushed last month, when the old Behemoth was replaced with a brand spanking new 2011 RV model.
Just as big and ugly but shinier! and maybe a tad bigger since there seems to be less space/light between where the garage ends and this overpriced/underused piece of shit vehicle begins.

I looked up what this baby costs new.
Can you say in the neighborhood of $45,000?!?!
Hey, that's great if you can afford it.
And I am sure on the surface this guy CAN afford it, since he owns his own insurance agency.  I don't know if he still has a mortgage and if his 2 later model vehicles are paid for....but they don't seem to spend money on groceries or go out to eat much, since his wife NEVER leaves the house at all! and they only have 1 kid to pay for/raise.
So spending their money on a big ass toy is not my problem with them.

But it a problem for me to spend this kind of money on something that you park in your driveway and DON'T USE for 50 WEEKS A YEAR!
Maybe it's just "me" but.....it doesn't sound like a good use of your money, unless your last name is Gates, or Buffet or King Abdullah of Saudi Arabia or something.
Doing this is like buying a new BMW luxury car and only driving it 14 days out of the year.
Seriously......who does this?!?!
Who spends $45K on something so it can sit and rust year after year?

If you want to vacation in a luxury RV for only 2 weeks a year, why not RENT ONE!?
I am sure it would be scads cheaper than buying one and letting it rot in your driveway for years between your infrequent trips in it.
If he thinks he is 'impressing' anyone by having it parked in his driveway, he needs to think again.
All he is doing is pissing ME off!
And he shouldn't be pissing me off right now......I have colanders filled with ripe tomatoes and I know how to throw them..... ;-)

Sluggy
Posted by slugmama at 12:10 PM

Email ThisBlogThis!Share to TwitterShare to FacebookShare to Pinterest
Labels: not frugal, rvs, showing off, spending money on things you don't use, stupid neighbors