Feeling Low About the Death of my Cousin

I got word that my cousin, Mel, died yesterday morning.  My mother was an only child and my father had one sister, my aunt.  So my only cousins are her 3 kids so now I have 2 cousins remaining. 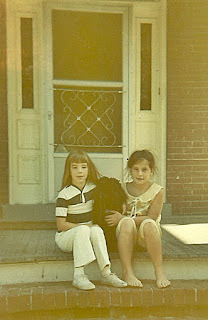 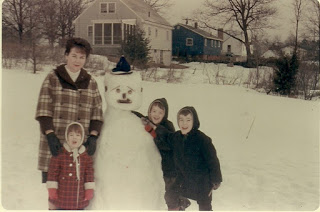 This is a photo from the mid 1960's of my Aunt, Mel and her 2 older brothers in their backyard in MA

Then both our families fell apart because of divorce when we were both teenagers.  I visited with my Aunt, Grandmother and my cousins in the Summer 0f 1979 when I was doing Summer Stock theater in New Hampshire. I saw Mel at my Grandmother's funeral as Granny was buried down in Virginia with her second husband in 1981 the Fall after I graduated college and my Aunt and Mel came to the funeral. 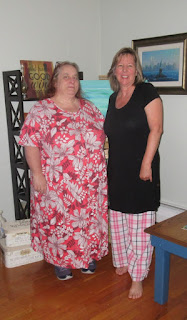 I finally tracked Mel down on Facebook in 2015-she was married and I had a devil of a time finding out her married name.  Mel and I reconnected  via Facebook in 2015 and about that time we were both done raising our kids and readdy to "get our lives back" and travel, etc. she organized a small family gathering at her home in 2016 with all but 1 member of my father's family(aunt, cousins, their kids, etc.)present,

And then about 6 months later came the news of Mel's Lou Gehrig's Disease(aka ALS)diagnosis. sigh
Hubs and I saw them the Fall of 2018 when we took Kim and her hubby up to explore New England(we al had dinner with Mel and her hubby one night on that trip). 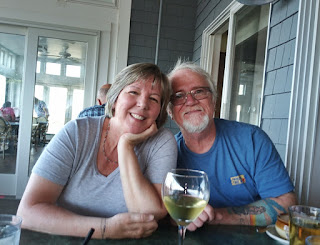 Then in 2019 on our way to Porcfest hub and I stopped by for a night to visit on our way to New Hampshire.  We had some laughs and went out to dinner and meandered around the harbor there.  She was still doing well even with the progression of that insidious disease.

Last Summer any plans to visit had to be put on hold(stupid COVID!)so there was just a little Facebook communication and then she took a turn for the worse about 6 months ago and went downhill fast and on Tuesday morning I got a call from her brother that Mel went to be with Granny and her dad(who passed in 2020)and heaven gained another angel.

I feel badly especially for her husband.  They seemed to have been deeply in love and I know he is hurting badly right now.  And is he special because he took care of Mel with love during her long(or short depending on how you look at it)illness.  He is a special kind of man.  Mel and her husband raised two fine sons together and dang it if she didn't become a grandmother before me. even though I am more than 2 years older than her.  ;-)

Mel was a kind, funny woman.....the light of my Aunt's eyes(not that she doesn't love all her children)but Mel was special.  Our lives seemed to have many parallels in them though we weren't close growing up or later in life.  I am so glad I reached out and reconnected as older women because she added something special to my life as she did to anyone she chose as her friend.

Please do me a favor and reach out to someone in your life today you haven't seen or heard from in awhile.  Don't wait until later because you don't know if you'll get another day and another chance.
Mel didn't even make it to her 59th Birthday.  None of us is immortal and the older we get time is the enemy.  Embrace each other and every moment, both the mundane and the extraordinary.

Email ThisBlogThis!Share to TwitterShare to FacebookShare to Pinterest
Labels: death can strike at any time, dying too young, heartbreak, such a special person