Last week was CRAZY at Rite-Aid!  With 4 different "Spend $50/Get $15 Bonus Cash coupon bar codes I spent a lot of time there stacking BC deals with those bar coded Qs.  I shared a couple of transactions last week. 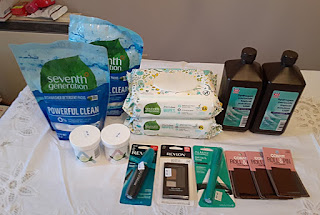 7th generation items were Buy 2 Get $5 BC back.  I got 8 packs(on various cards/accounts)of baby wipes which cost $ per pair and I got back $5 per pair so $ per pack after deal.  I also found 2 packages of dishwasher pods which were $5.59 each and after $5 BC back each package cost me $3.09.  Not bad for something we need/have to have.

I got 8 bottles of Hydrogen peroxide.  These were $1.03 each with my 20% Gold discount and you received $1 in Bonus Cash for buying in pairs so they came out to .53¢ per bottle.

I also picked up 3 packs of Conair bobby pins on a Buy Two/Get One Free deal and got back $3 BC on that as well. 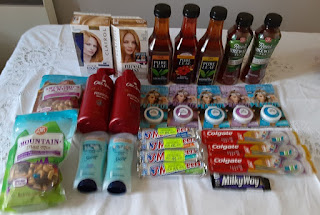 I did the two different drink Deals a few times, the Clairol Deal once, the Trail Mix Deal twice which double dipped with the Easter Spend $25/Get $5 Deal too.  I did the Irish Spring and the Colgate Deals, the Nature's Truth Vitamin Deal a few times and the P and G Spend $30/Get $10 Deal a couple times.  The candy bars were a deal on sale for .88¢ and had .50¢ freshness peelies on them.  The Got2Be hair chalk was 75% off($1.74) and gave back $2.50 on Ibotta each.

There was more than what I shared photos of but since the deals are over(last week)no point in expounding on the finer points of it all.

Only I hiccup happened.  the cashier scanned my $50/$15 BC coupon AFTER scanning all my other Qs used so the register didn't give me the extra $15 BC back. Ugh!  So they gave me $15 in cash which worked too. ;-)

The June Giveaway is now CLOSED.
Thanks for entering!