Rerunning this post from 2013 instead of just throwing up a jpeg of a 4th of July image.

I could have alternately ranted about how we are a nation of pussies, who don't care about freedom and have no backbones upon which to take back our country from the politicians(who are suppose to be working FOR US, not against us.

If George, Tom, John, the James and such were alive today they would surely wish to "apply their collective foots to the seat of our collective learnings".
But I am just too lazy and it's too hot out for all that.

Trivia is a bit more interesting, don't you think? lolz 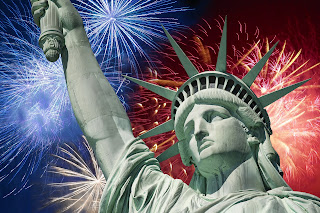 In honor of our country's liberation from the tyranny of King George III of England in 1776, here is a little Trivia Quiz about our National celebration and assorted things having to do with this holiday.
See how much you actually know about these little known facts about our history.

1.  What is the correct date of our declaring independence from England?  Hint-it's not July 4th.

2.  Philadelphia is where the Declaration of Independence was voted upon and signed in 1776.  What was the most widely spoken language by residents of Philadelphia in 1776?

3.  Which 3 American Presidents have died on July 4th?

4.  Who were the "Committee of Five"....the group of Continental Congress members selected by that body to come up with a document of independence?

5.  Who designed the current version of the US Flag?

6.  What bird did Benjamin Franklin propose be the emblem for our country?

8.  How many versions of the American flag have there been since 1776?

10.  How many copies of the original Declaration of Independence printed in 1776 are known to exist today?

11.  How many members of the Continental Congress signed the Declaration of Independence in 1776?

12.  Of the signers of the Declaration of Independence how many also signed the U.S. Constitution?

Answers will follow tomorrow, if anyone is sober enough by then to read them(and didn't shoot off their hands). ;-)

Sluggy
Posted by slugmama at 2:14 PM