We picked up our new puppy on October 16th.
His name is Chester and he is a long haired Chihuahua.
He was 27 weeks old on Monday so just over 6 months old.
I sat in the back of the car with him next to me in his new pet bed for the ride home as we hadn't gotten a car carrier yet. 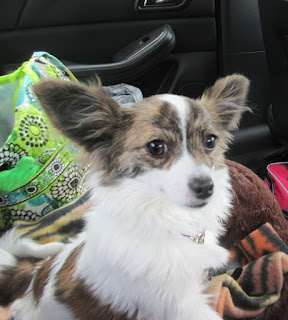 He was quite subdued and I'd guess confused about what was going on. 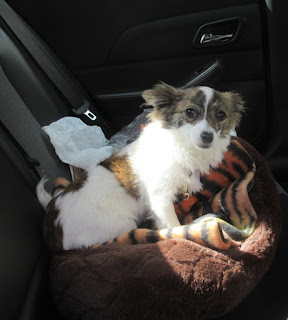 Ok buddy, it's time to get out of the car.  He was hesitant.

We had bought a pet gate to restrict Chester's activity to the den, a leash for taking him out to potty and a crate to keep him confined in the den when we couldn't be watching him.

Here is Daughter's dog watching intently from the kitchen while Chester got to acquaint himself in his new digs. 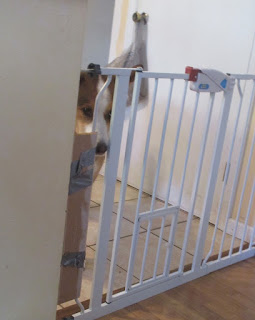 Daughter's dog, Cinnamon, was raised with cats and I think she saw Chester as just another cat.  The cats never wanted to "play" with her and when she tried to play with them she'd either get ignored or hissed and clawed at.
This was going to be a big change for Cinnamon. ;-) 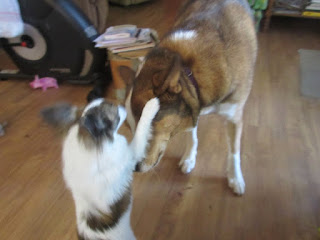 When we let Cinnamon in, Chester went right over to her on his hind legs and got into her face.  She sniffed him a bit and then the play posing began on both parts. 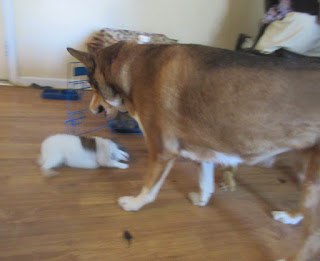 Cinnamon is a very gentle and timid dog so we weren't worried about her "attacking" Chester.  She mouthed him a lot but was quite good with Chester, as we hoped she would be. Chester is smart enough to play submissive with Cinnamon when it's called for.
Cinnamon has been extra clingy on me since Chester arrived as expected.  We are sure to give her lots of attention too and treats and praise her. 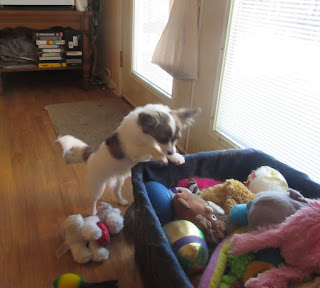 It didn't take Chester long to find Cinnamon's toy box either.  He got about a third of her toys pulled out of there in short order. 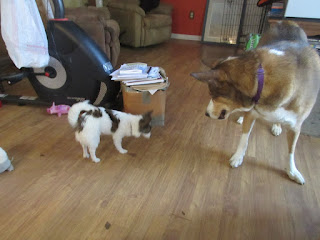 When he is awake he is generally a whirling dervish.  Well he is a puppy after all. lol
So it's hard to get a photo of him that isn't blurry.  Here is a rare one when I caught a break in the play action.  You can't see his sweet face but it gives you an idea of the size disparity between Chester and Cinnamon. 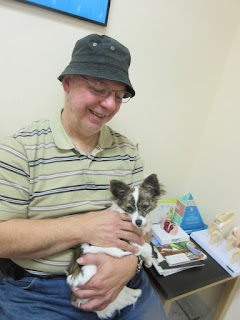 Three days after bringing Chester home it was time for his first doggie doctor visit. 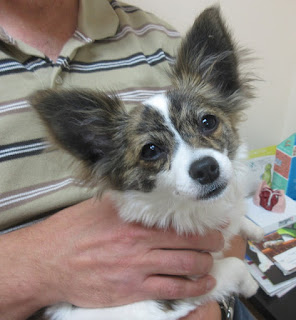 He was very good and calm with the clinic staff and doctor.  He got his rabies shot and we go back next Thursday for his distemper vaccination.
Chester weighs in at a whopping 4.5 lbs.  You can't give but one shot at a visit to a dog this small.

He still has two baby teeth that haven't come out yet so the teething is furious still.  Hopefully he can get them to come out with all his chewing and we don't have to pay to have the vet remove them. 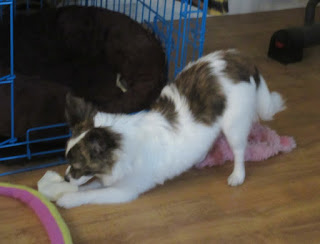 He's even calm when you inspect and handle his mouth which isn't something most chihuahuas like.  I'm going to try to get him use to having his teeth brushed so we can avoid a common chihuahua problem-loosing teeth.  Most elderly chihuahuas have no teeth. 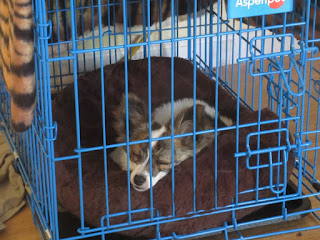 We started in with outdoor potty training right away so he is watched constantly for signs of having to go.  When he can't be watched or held he spends time in his crate.  He likes to chill out some or chew his rawhide  in there.
Not quite 2 weeks in and we have very few accidents in the house already.  They say chihuahuas are stubborn and hard to house train so best to start training asap.  We'll see how anxious he is to leave the house to do his business once the snow starts. ;-) 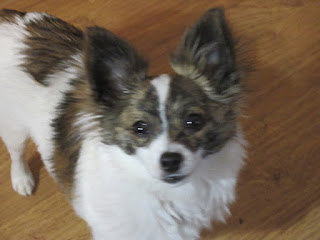 Chester has a slight under bite.  You can see it a bit in this photo.  It just adds to his charm.

I know someone who use to breed chihuahuas, smooth coat or short hair ones(the most prevalent type of hua).  She said she prefers long haired ones in general as they seem to be less nippy and yippy than the smooth coats.  Whatever it was they bred into the breed to make the long hairs it made them less "nervous" and high strung and less clannish.  They will still protect their owners and alert you to danger(as they perceive it).

I can't wait for College Boy to come home for Thanksgiving and bond with this little guy too.  I sent him a picture of Chester and he can't wait to get his hands on our new family member.