This is Sluggy's Cautionary Tale. 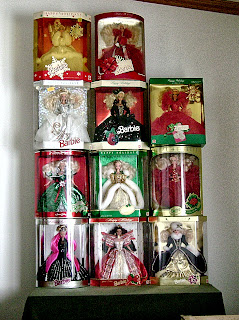 I got the remaining load of dolls uncrated, cleaned up their boxes(if needed), photographed and put up on the local Yahoo Tag Sale site the other day.
14 assorted dolls and 6 boxed outfits for 1 of the dolls.
This is the last of the dolls that had belonged to my mother.
And I am feeling sad.

Sad, not because they remind me of my mother and she has been gone now 11 years.
Sad because of what they represent......all that wasted money and the opportunity to use that cash for a better purpose.

You see, my mother never actually enjoyed these dolls.
At some point after her divorce from my rat bastard father(don't judge me), after she had been getting her alimony for awhile and felt financially secure(though she really wasn't), she began to buy these dolls.

Basically I can see now why she was spending all this money on something she stuck in the dark recesses of her closet as soon as she bought it.
She was buying her childhood....or rather, the childhood she wish she had had.

My mother was an only child, born in the midst of the Great Depression.  Her early years were spent growing up in the hills of Virginia(think "The Waltons").  Her parents were young and seeing as her father didn't work much due to the double whammy of no jobs and he drank, they had nothing.  Though they lived in the midst of a very large family in the immediate area with some wealth and influence, this little family unit was dirt poor.  They lived without electricity, running water, flush toilets in a log cabin that I suspect my Grandfather had built.
Not a Log Home, a one roomed log cabin on a little patch of land my Grandmother's parents had given her.

Eventually they moved away from the hills down to the coast and the big city, where there were economic opportunities.  This little family went on to prosper but my mother's early childhood, while filled with a large loving extended family, was void of "things".

So when she felt she had money to "play around with", she started buying the things of her childhood days that she was deprived of in her youth.  A few times, when she would show me or talk about something she bought, she'd tell me it was an "investment", because these were collectibles, limited edition or special items.   I am sure I was rolling my eyes at her in response.lol

No one knew the extent of this "rebuying your childhood" spending until after she passed away.
That's when my brother went into her closet and found the hoard of dolls.
Barbie Holiday dolls, replica dolls, Danbury Mint dolls, porcelain dolls.
Her three most favorites to buy were Shirley Temple dolls, Gibson Girl dolls and Christmas Barbie dolls.
I can see why she collected these three types.....
*Shirley was a BIG star as a kid and the same age as my mom.
*Gibson girls were from a more romantic era(mom was a romantic at heart) and represented her mother's generation
*My mother was a HUGE FAN of Christmas.

And she left every blessed single doll to my Daughter, her only Granddaughter.
My tomboy daughter, who stripped nekkid her 1st Barbie doll and left in a corner so she could put the outfit on her miniature stuffed animal.lol  Daughter was never a fan of dolls.  She didn't want them, I didn't buy them. 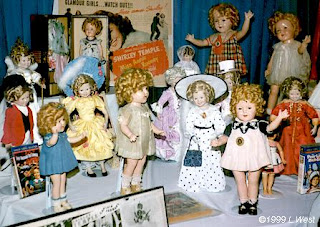 So my mother never actually gave Daughter any of these dolls, when mom was alive and my daughter was young and could enjoy them.
Mother also never displayed or enjoyed her dolls in her own home.

About 10 years ago, after my mother passed and her estate was cleared, I was given possession of all these dolls.  This was not even a year after we moved to this house.  Between the day-to-day of raising 3 kids, settling into this home and dealing with my own depression and shopaholic tendencies, I was overwhelmed.

As there were so many taking over the house and our lives, I decided to sell them a few years after bringing them to PA....or at least the ones I could find at that point.


I was able to sell off via eBay about half of the number we had.  That was 6 or so years ago when going prices were higher on the auction market.  I tucked that money away for Daughter's college fund.
Let's just say, even in a better economic climate, I recouped pennies to the dollar of what my mother spent to purchase these dolls at retail.


About half of these dolls got packed away and mixed in with my own hoard of stuff and I didn't see them again until recently, a decade later
Now that I've uncovered the rest of the dolls, I am hesitant to put them on eBay.  After the fees and the hassle of packing and shipping these things, it is not worth my time for the tiny bit of money they would bring.
Daughter still has no use for them as a 19 year old.  We are planning on moving in 7 years and we don't have room to cart them around until she is on her own and out of the house for good, when she could do with them what she wants.  I suspect at that time, she'd either put a sign that read "FREE" and put them on the curb or use them to build an awesome bonfire. ;-)

So I have made the executive decision and put them on the local selling site and am hoping I can sell at least half of these.  The ones I can't unload I'll have to cart off to Salvation Army and at least get a little tax write-off. 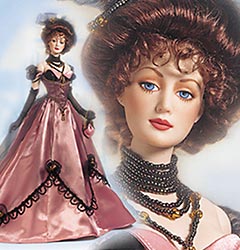 I pulled out the paperwork I have that's associated with these dolls.  Yes, my mother took photos and kept everything for insurance purposes.lol
I got exceedingly sad seeing in black and white on those invoices, all the money she spent on this crap.

All that money that, if she had just stuck into a savings bond or a bank account, could have paid for 4 years of tuition at a good school for her darling Granddaughter.
Wasted on a U-haul truck load of worthless dolls that nobody got to enjoy.

So I am doing the best I can with this situation and trying to turn it into a blessing.....when I'm not looking upward and asking my mom, "What the HELL were you thinking!?!?". ;-)
Maybe I'll feel better when the dolls are out of my life, since they represent waste and sadness to me.

Just take my advice.....If a doll is refered to as a "collector's edition" or a collectible investment, please do yourself a favor and RUN, don't walk! away from it as fast as you can! 8-(