The Past 10 Days or So at Chez Sluggy

Well the "Great American Eclipse" came and went a week ago Monday.
Here in my part of PA we only got 72% totality....... 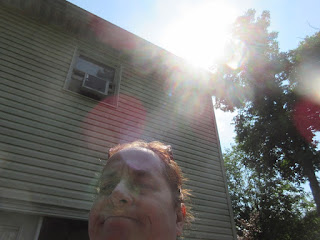 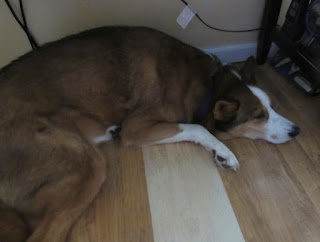 Daughter's dog in her usual spot chilling under my desk on Tuesday. 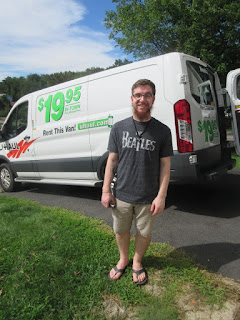 On Wednesday it was time to load College Boy up and take him back to school.  He had an audition on Thursday so he needed to be back and unpacked on Wednesday.

This semester he is sharing an apartment that two friends of his(sisters)rent.
He will only be there for 1 semester so this was the best situation for both him and me(me financially).  It is soooo much cheaper than being in a dorm! 8-)))
Since it is a 2 bedroom apartment he is getting the living room for his bedroom.
Before his crap...... 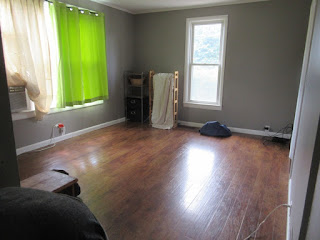 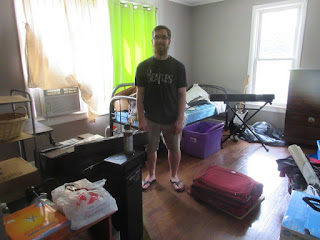 He had it all organized and set up before going to bed that night. 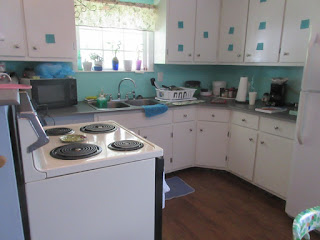 Actually it's a nice little apartment with a cute kitchen.
Just wait until College Boy starts banging around in there....it won't be so clean and neat. lolz 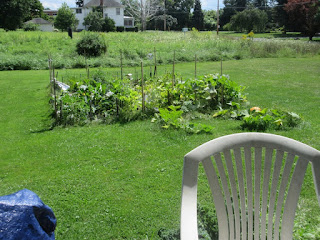 You can tell a couple of "20 something" gals live here and not guys.  They even had a little garden out back. ;-) 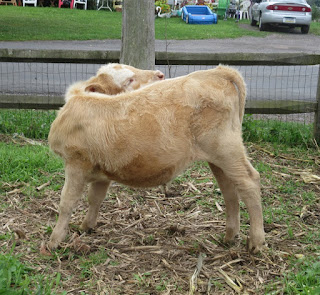 On Friday last week Hubs and I ran errands.  I wanted to see if I was in time to get and can tomatoes this year from the local farm. 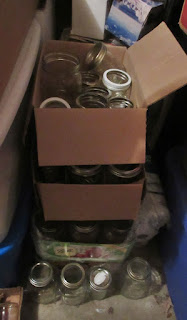 I drug out my canning jars and I had 32 quart size ones to use. 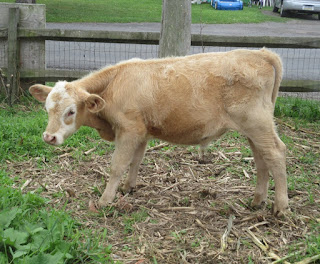 Smile calf!
Seems tomatoes are ripening slower than usual here this Summer so we were a couple of weeks early. 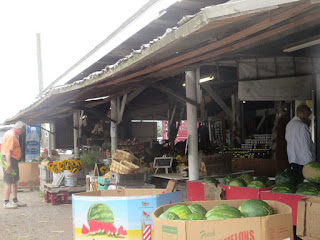 We'll go back after Labor Day, calling first, to pick maters.  We got some corn and zukes while we were there so as not to waste the trip out.

Then we circled back to the town South of here to hit the Weis Fantastic Friday deals there. 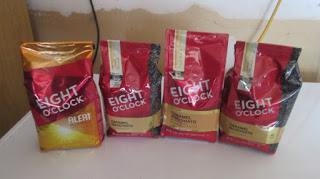 The best deal was 4 bags of coffee for .72¢ a bag that I already blogged about.

On the way to the other side of town there I saw this massive furniture store that has been having a "going out of business" sale since before we moved to this area 17 years ago...... 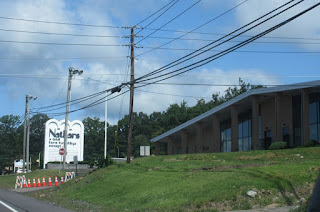 And they actually WENT OUT OF BUSINESS finally!!! lolz 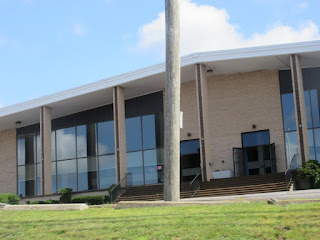 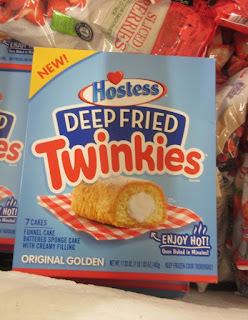 Then we hit Aldi for a few things.  I gladly left these deep fried Twinkies in the store though.
ick.

Saturday I kept tabs on Hurricane Harvey down in the Gulf as it made landfall in Texas.  Historic levels of rainfall there and flooding!  Surprisingly the death toll has been low considering the size and scope of the flooding and people seem to be pulling together in this crisis.  Next month, when we have some free income I'll consider how best/where to send a check to help.

The rain is slated to crawl up the coast and inland into Louisiana including where our house there is located.
I'll have to reach out to our realtor there to keep tabs on things for us. 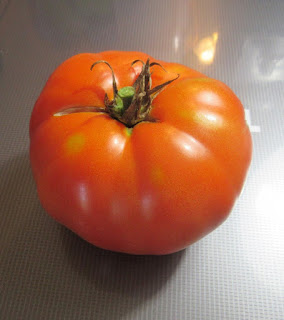 Last Sunday I picked the first ripe tomato out of our garden.
Yah!

Hubs also sat down with me lasts Sunday to go over our money situation.  Since the dust had settled on all the retirement things that were up in the air it was time to see where our $ was sitting and see what needing to be moved and where.
We threw a big chunk of the regular savings we have which were in some higher yield(ha! higher!!)online accounts into a CD.  This will earn us double what they'd been earning...almost double of NOTHING but still, it's a little more.  8-(
We still need to keep quite a bit liquid however because A-we have to pay for work on the house in LA still and B-we need to pay for our healthcare premiums(OUCH!)OOP and be reimbursed from our Retiree Medical Savings Account(RMSA).  Hubs still hasn't started the paperwork for that so no clue yet on how long they take to reimburse this expense.  bleh. 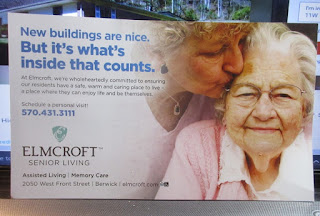 On Monday the mail brought this great offer........for a retirement home/senior assisted living.
Not even a free lunch which was offered to tour the facility would get me to go look at it. lololz

I guess if you retire, even if you retire YOUNG, that triggers a slew of old age services to be offered to you via mail and phone.
Oh yes, we are getting phone solicitations too for stuff like this.
I don't think Hubs nor I are decrepit enough yet to need assisted living. 8-(

Also on Monday Hubs and I celebrated our 35th Wedding Anniversary........ 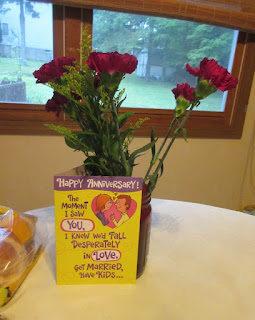 We were low key about it, and just went out to Chili's for lunch(using a free gift card we have had for AGES).
Then Hubs snuck out that evening and bought me some flowers and a card at Weis.
35 years.
Now I do feel old enough for the Assisted Living place. lolz

We did some weeding in the yard on Tuesday.

Here is what the flowers out front looked like mid June after the critters stopped nibbling on them. 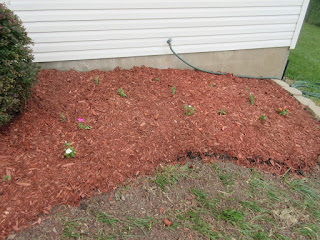 And they have made a nice recovery by late August. 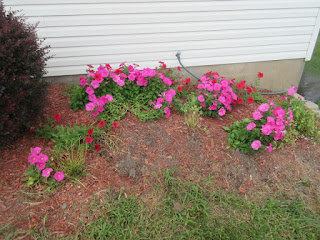 And I picked some more veggies from the garden-more tomatoes and our only Summer squash. 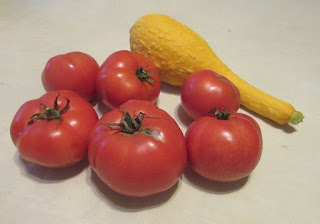 Now we've started a big project--dealing with the rotting wood under and around our French doors to our deck.
Oy vay!  What a mess!!

Actually Hubs isn't handy and isn't anywhere near qualified to redo this stuff so we are cleaning it out and cobbling something together to keep the elements out for this Fall/Winter and will have to hire someone to do the "real work" on it come Spring as it will be expensive.
Since it will mean replacing some sub flooring in the den too we'll probably go ahead and have the laminate flooring in that room replaced at that time since it needs to be done before we put this house on the market anyway.(There are holes in the flooring, etc.)
If I get ambitious this Winter I'll think about repainting the room as well, since it needs that also.

I always love to when you start to deal with house problems it's always like opening a can of worms and leads to more problems and money that needs to be spent.
Sigh.

I've got to get going here now.....it's Weis(PMITA)Markets Day and a trip to Rite-Aid for an Rx is also in order while I am out.

What's been going on in your world lately?