The "Tired of Coming Up with Meals this Week" Edition....... 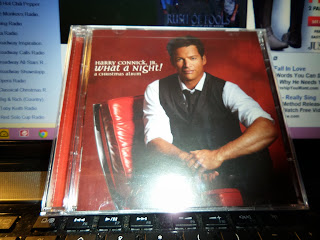 I had to get out of the house this weekend as I was going stir crazy.  Hubs and I went to Ollies(Good Stuff Cheap!)and looked at all their Holiday stuff as I haven't been in Ollie's since the Summer.  I bought this Holiday CD for $4.99....I don't usually spend that much on them but what can I say?.... I love me some Harry Connick, Jr.
It's not even December but I did play it already.
Good stuff! 8-))

Here are the meals that were planned last week--
Sunday--Clam Chowder
Monday--Tacos(I'll probably have a chicken sandwich and a part of a bag of frozen veggies.)
Tuesday--leftovers
Wednesday--Lasagna, Salad
Thursday--leftovers
Friday--London Broil, Asparagus
Saturday--leftovers
Everything was eaten as planned except the London Broil was served with a Tossed Salad(didn't get to the store with the sale on asparagus)and Brussel Sprouts were served with the Lasagna.

Leftovers going into this week--1 bratwurst(I put it into the freezer for later), leftover chicken pieces, carrots and potatoes, taco fixings, lasagna and London broil.  So many leftovers that I shouldn't have to cook but 3 days this week.
Go me! lol
I am not planning a meal around the leftover taco stuff since #2 Son will probably end up devouring that over the next few days. ;-)

Sunday--Chinese Take-Out  Treating ourselves tonight
Monday--Mushroom Alfredo shells with leftover London Broil, Spinach Salad(Hubs is craving pasta)
Tuesday--Baked Fish(in freezer) and crab cakes(freezer), coleslaw, some veggie(freezer)
Wednesday--Lasagna(leftover-then the rest gets put into the freezer for later)
Thursday--Chicken Pot Pie(using leftover chicken, carrots, potatoes + fresh broccoli)
Friday--maybe Domino's pizza using one of my free coupons + a big salad for me
Saturday--leftovers or something scrounged around the house

What I need to purchase for this menu?......cabbage for slaw, some milk and fruit.  I'm going to buy a rotisserie chicken at Weis(on special $3.99 this week)and slice that up for my lunch sandwiches.  I bought mushrooms and spinach salad last week.
I still need to spend about $125 in the next 2 weeks to get a Thanksgiving gift certificate at the Shursave market.   So I might buy some things ahead this coming week(baking goods mostly and some to use the next week plus fresh produce that will not go bad in the few 2 weeks).
I'm going to try to keep the spending to $80 this week.

What got fixed and served at your house this week?

Sluggy
Posted by slugmama at 10:50 AM

Email ThisBlogThis!Share to TwitterShare to FacebookShare to Pinterest
Labels: $400 food budget for November, make a menu based on what you have and items on sale at the store, meal planning and budgeting, what we are eating this week