The Trip To OH'HELL"IO....Chapter Two

So we backed out of the driveway on Sunday morning, credit card-less, with a prepaid card, my small debit account card and some cash.

The drive to the Summer Camp was uneventful mostly.  We stopped for breakfast at a McDonald's off the interstate about a half hour into the trip.
You know.....for a quick, easy and cheap meal.
We got 2 outta 3.
After dropping $17.84  on some biscuits, hash browns and drinks for 3, I started freaking out in my head.
The 1st time we ate and we are out almost $18!

We've got at least 11 more meals to pay for PLUS tons of GAS for the car and Hotel rooms.  If we kept this level of spending up for every meal I was sure we'd be stranded on the side of the road somewhere on the way home in the middle of nowhere, out of gas and cash.

So I slapped a smile on my face and "poo-pooed" those bad thoughts from my head and alternately noshed and cried into my sausage biscuit.

We stopped near camp and got #2 Son a sack of burgers, since the camp doesn't serve lunch on Sunday, so he'd get some food before dinner time.  Hubs and I weren't hungry so we abstained from that festival of grease.

Had a quick visit with #1 Son, dropped #2 Son and we were off again, headed into Ohio.
This is the sign we pass into Ohio.  The nephew was NOT standing there waving on this trip. 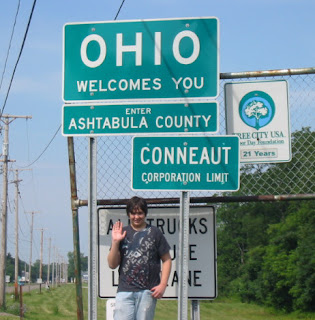 Since it was Father's Day, I planned to take Hubs to PF Chang's(his choice) along the way to Columbus.  I found one outside of Akron so we stopped for an early dinner.
Hubs chose to try PF's over Cheesecake Factory, neither of which he has ever eaten at. 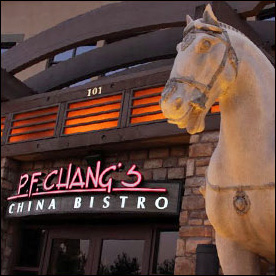 I have been to PF Chang's a couple of years back, when my Brother's wife took me to one in VA.
It's not my "cup of tea" really....pardon that pun.....
The food is good but nothing to write home about.
It's just glorified Chinese food......dishes they have made upscale so they can charge a premium price.
$13 for Mushu Pork?
WTF?!  Maybe in Manhattan but NOT in Akron.lol

Some of the traditional Chinese food dishes and Noodle dishes are around $10-$12 a plate.  But they also have other unusual for Chinese restaurants type dishes for an even higher price point.  $18-$40 dishes.

I don't know....you pay for the fancy interior of the restaurant and the "experience" I guess.
Id' rather have less experience and lower prices. lol
But we had that $25 Gift Card so the out of pocket was about $15 with tip.

Not only did Hubs order a fancy-pants pricey entree, he ordered a side dish of Lemon Infused shaved Brussel Sprouts.
Here is what is should look like.... 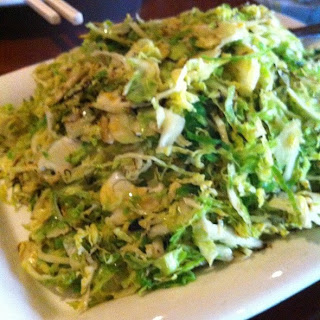 Ok, so you get about a third as much as they show in this photo.
That's ok thought, because they taste like crap.
No, wait!
That's not accurate.

They actually tasted like dirty gym socks that had been washed in lemon Tide.
They had the earthy taste of a dirty sock that had fermented in a gym bag for 2 weeks paired with the after taste of a glass of water mixed with lemon scented Tide poured over it.
And whomever in the kitchen was suppose to shave the sprouts either got tired or didn't come in that evening, because I've seen better shaving on a bearded lady at the circus.  There was a top layer of shaved green matter with big chunks of sprouts underneath....big undercooked chunks.
ick.

Am I getting through to anyone how awful these things were?!?
They smelled fabulous.
But you were better off eating them with your eyeballs.
Even a pound of BACON layered over them would NOT have helped the taste!!

Hubs made the mistake of asking me how I liked them after he made me taste them....and this was after he saw me dive for my water glass as I tried to choke my bite down.
After almost 30 years, he really should know better, right?

And when I told him they were wretched to me, he took offense.
So of course, I had to keep bringing up how truly bad they were, which put a "delightful" countenance on his face for the rest of the meal.  Well since the kids weren't there to piss him off on "HIS" day, someone had to do it!

And when he neglected to finish every last bite of that dish we actually paid money for!, the ribbing continued.
He got so mad that I started laughing.  And when I get "tickled", I can't stop laughing until the tears are running down my face and my legs.  Kind of like last Winter when we went to the Hibachi Restaurant and they got me snockered on sake and then the knife guy pulled a rubber chicken out of his torque hat and I lost it.

About Tuesday evening or so, Hubs decided that he would stop being perturbed and actually started laughing along with me about those horrid sprouts.
The PF Chang's brussel sprouts have now become an inside joke in the family, on par with the gigantic fish sandwich they serve at every restaurant in western PA.

Besides tasting the gym socks, I also made the mistake of choosing a messy food.
The Mushu Pork pancakes were thin and tore and I ended up wearing most of my meal.  That's when I was thankful for the very low lighting and that I had worn a floral dress with a dark purple background.
And we had no leftovers to take with us, since the portions were quite small and much of mine ended up on the floor, in the booth or on me.  If I'm paying $13 for Mushu Pork(which by the way, was mostly comprised of eggs and huge hunks of scallions)I damn well want to have enough left for a second meal. 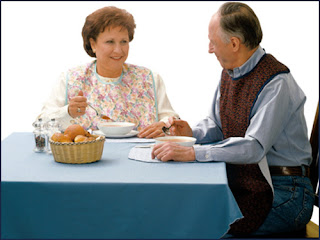 I have entered that stage of life where I really need a bib again when I eat.  Either that or disposal clothing.
But I digress.....

In the end, we were out another $15 in cash.
And we had to fill the gas tank twice that day, before we got to Columbus.
Please picture the tiny little woman in my brain with an abacus starting to froth at the mouth over what we've spent on Day One.

We got from Akron to Columbus with no big traffic headaches given the late hour on a Sunday.
Once we got out of the general vicinity of Cleveland, until we got to just outside of Columbus the traffic was aok.
But Cleveland was nuts! 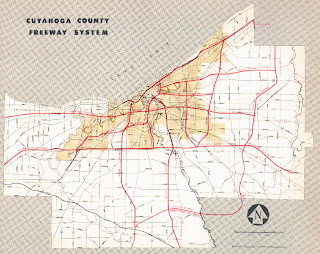 Even though it doesn't look too outrageous, the photo below is what the Interstates in OHIO feel like around Cleveland...... 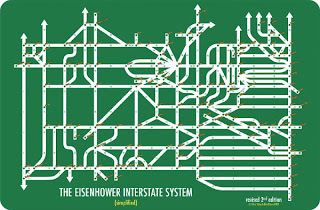 I'm sorry but there are just too many different interstates crammed into such a small area!
Just trying to keep straight which one you want to be on is mind numbing to a tourist.

We got to the motel in Columbus well before dark because Hubs drives like a bat outta hell.
He pulls up to the door and goes to check us in.  I'm sitting in the car and some old beat up Lincoln Town Car pulls up behind our car and the guy driving it just sits there.
It's obvious he isn't waiting for someone, to pick them up, and he's not getting out to go check-in.  He's just watching me(as far as I can tell from watching HIM in the flip down visor mirror),  and smoking a cigarette.
Due to the credit card information theft my mind starts running wild.  I'm imagining that this creepy old guy is the one who stole our credit card info.....it makes sense, he would know when/where we were checking in and we'd have PA plates on our car, right?.....and he is sitting there waiting for us to park so he can either follow us up to the room and murder us or break into our car and steal it once we go into the motel.

So I roll up the windows in the car even though it's 90 degrees out at 8pm at night and keep one hand on the door handle and one eye on him via the visor mirror in case I have to make a mad dash to the lobby.

I guess this whole situation has me just a teeny bit paranoid, huh? 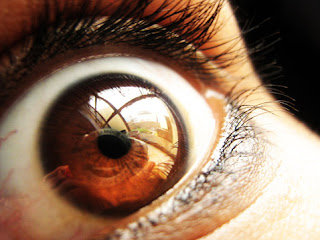 Hubs finally comes out and we park and lug the luggage up to the room.
My creepy friend is still sitting there in his car, not pulling up to the door now, but just sitting in the middle of the parking lot road and watching us as we disappear into the motel.
I insisted that we ride the elevator ALONE to our floor.....who knows?....creepy guy's accomplice could be in the lobby waiting for us to be cornered in the elevator with him....alone.  Hubs just looks at me like I've lost it while I keep pushing the floor button in the elevator and won't let anyone else inside.

So we settle in and crank the air up in the room.
Long about 9 pm. Hubs wanted some coffee.  He drinks two tree(2 tree=2,3) cups every evening so I tell him I saw a Tim Horton's across the highway from our hotel.
He decides to drive over and get himself a large cup of caffeine.
Since I am now hungry again after spilling my fashionably small plate of dinner all over myself 4 hours ago and my nerves could use some soothing, I ask him to pick me up a coupla donuts....bonus points if they involve chocolate! 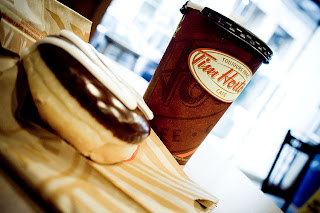 I was surprised to see a Timmy's this far South?!  The donuts were stale(sitting for hours I guess)but the chocolate on top was comforting.

A chocolate donut was just the thing to relax me so I could drift off to sleep without creepy guys lingering in my brain.  I did, however get up 3 times that night to check and make sure the security latch was engaged.....

Sluggy
Posted by slugmama at 9:11 AM