The family had a yard work day on Sunday. The weather was nice, a tad cold but nice, so we donned the work clothes and set out to get the garden beds ready to plant. We pulled up weeds, raked up undecomposed leaves and such from the beds & did some weed whacking around the dog run and pool. There was also the end of last year's dirt pile to move so we could level & reseed the now grassless spot where it had sat. We also had a new pile of dirt delivered last week that had to be dumped into various garden beds. The compost also needed work as it had sat unattended all winter.

After a few hours of work, we called it a day and I had the task of feeding the ravaneously hungry crew. Besides the steaks I bought the day before to grill out on Sunday, I had been so busy with the yardwork that I hadn't prepared any other dishes to go with the protein....heck, I didn't even have ANY IDEA of what to serve with the steaks. So I opened the pantry door and peered in to see what stockpiled items would 'speak' to me.

The vegetable dish was easy, as I had some frozen boxed mixtures to choose from. The carbo dish was the hard one....I had some potatoes I needed to use up but baked potatoes would take too long and I didn't want to fry anything since I was on outside grill duty.
A box of Knorr dry soup mix caught my eye and I took it from there, making it up as I went along.

I washed & peeled the potatoes. Then I cubed them, placing them in a big stainless steel bowl. 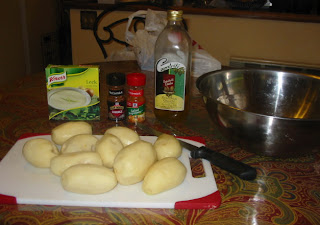 I poured in about 2 Tablespoons of EVOO=Olive Oil, and tossed them in the bowl to coat. 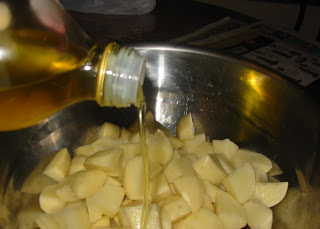 I sprinked on 1/2 a packet of Knorr Leek Soup dry soup mix, shaking the potatoes so they were coated evenly.
The Knorr Soup Mix was a find from a Big Lots at $1.00. 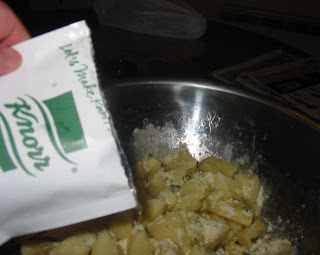 Then I shook on McCormick's Salad Supreme(a salad topping seasoning mix)& one of their Grill Mates mixtures called "Hamburger". This had salt, pepper, chili flake, garlic, etc. in it. The Salad Supreme has Parmasen Cheese in it, among other things. I sprinkled on each, while tossing the potatoes to coat evenly, using about 1 Tablespoon of each. 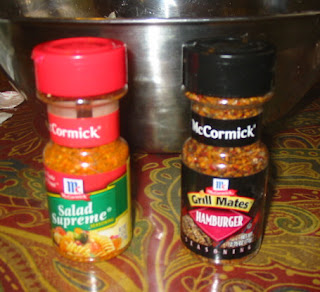 Then I lined a cookie sheet with foil and turned the potatoes out on it, spreading them evenly. No need to spray the foil, as the EVOO on the potatoes will keep them from sticking to the foil. 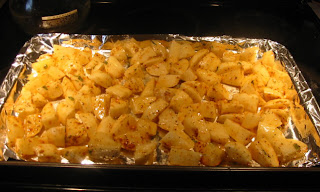 I roasted the potatoes in a 400 degree preheated oven for about 22 mins. or until the chunks were cooked through and they were golden in color. (Smaller pieces will cook quicker-larger pieces will take longer, so YMMV.)
And here they are! My photography isn't the best but even with my skills with a camera, they looked good enough to eat!lol 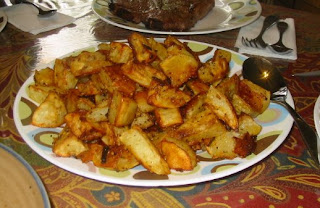 The family gobbled them up in short order and gave them 2 thumbs up.
The potatoes were inexpensive, as potatoes usually are....about $1.00 for 7 spuds.
The Soup Mix was $1, so the half I used was .50¢.
The McCormick Seasonings were $1 & $.67 a bottle, respectively, on sale and with $1/1 Qs. I used approx. 1/4 a bottle each, so .25¢ & .17¢=.42¢ for both.
EVOO was .13¢ a tablespoon, so cost was .26¢ for 2 TBs.
$2.18 total for 6 generous servings or .36¢ per serving.
I thought this dish was fairly successful. It was tasty without resorting to mashing and tons of Butter & Salt....not that there's anything wrong with Butter & Salt.lol
It's Monday night and I STILL don't have my Menu Plan done for this week!
*sigh*
Maybe a refreshed brain in the morning can deal with this chore. I'm just too beat to think up anything good tonight.
Off to rest my weary bones.....
Sluggy