On Tuesday we headed out to see a historic site-the Old St. Martin's Church.  This was on Hubs to-do list.
The church is 2 miles north of Berlin at the junction of two limited access highways.
Well we drove right by it once and then couldn't really get to it going back the opposite way.  It is REALLY at the junction of the roads but tucked back into the woods and it's not clearly marked how to access the site from the limited access highways.

Eventually we figured it out and arrived at our destination. 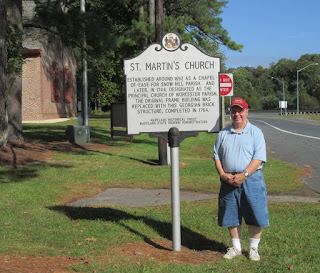 It was a chapel of the Snow Hill MD parish established circa 1692.  Eventually it was designated as the principal church of Worcester parish. 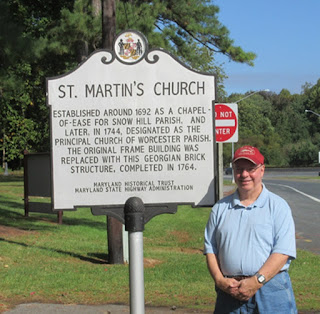 The original frame building was replaced by the still standing Georgian brick church in 1764. 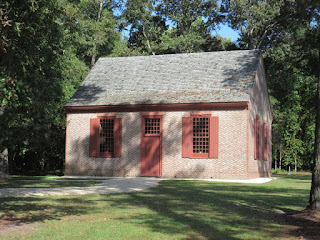 Unfortunately we found out it is only open for tours on Mondays so we missed being able to wander around inside by a day. bleh. 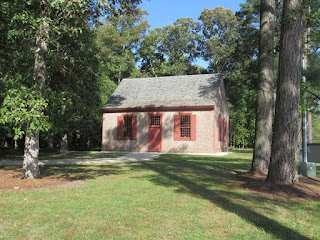 So after walking around outside(not very exciting)we drove back to Berlin and checked out a thrift store across the street from the Sav-A-Lot market.

I found this coffee table book my sister in-law might have liked.  (She's a BIG Princess D fan.) 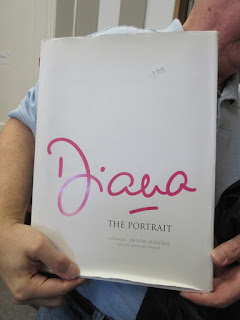 Another picture book about the Metropolitan Opera.  I had one of those years ago with all kinds of old hokey photos of rotund opera singers. 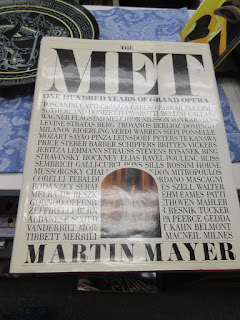 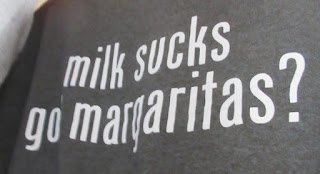 Turned it to the front and saw it was a restaurant shirt for the place recently departed blogger The Cajun use to work....... 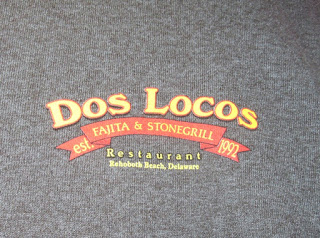 TI bought a couple of books and then it was off to lunch.  We bought a Restaurant dotcom certificate before leaving home for this newish place that had opened up on the road to the casino in West Ocean City called Abi's Diner.
We didn't know what to expect but we are up for new eating adventures on vacation. 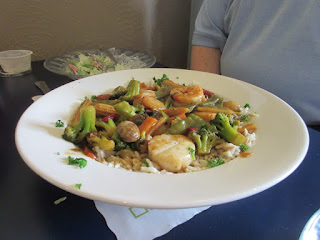 Hubs got a massive plate of shrimp stir-fry.  It was ok but a bit heavy on the soy sauce(salty). 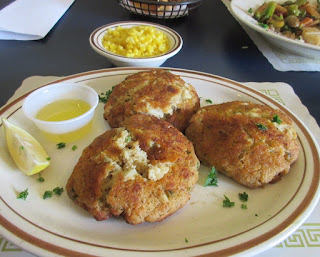 I got a plate of crab cakes.  They weren't top notch(lots of filler/breading in the cakes)but for $8 what do you expect? lol
They were tasty and the meal came with a salad too.
It was cheapish(especially with the gift cert.), filling and the prices were very good compared to everything in Ocean City.  We will definitely go back there next trip to OC.

Then we went back to OC and took a walk along the boardwalk as it was a beautiful day.

This is the sign at the pool bar at our hotel.
"Overpriced Drinks & Lousy Service"
Yep, that about sums it up(along with rude and noisy customers)....lolz 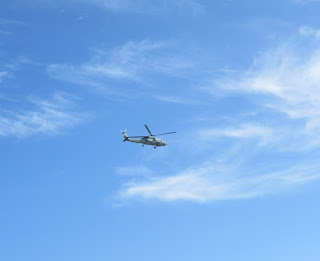 Hubs had to pose with this bar advertisement for National Bohemian Bear.  When we were in college in Baltimore, all the broke college students drank this swill.
I guess life has come full circle because Natty Boh is the drink of choice among young hipsters in OC.....well the ones who can't afford craft/micro brews...... 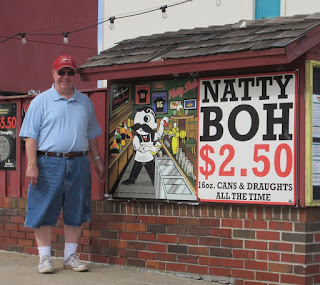 Some of the benches on the boardwalk have memorial plaques on them(paid for by folks who donated $ to the bench purchases)
Evidently the people who sponsored this bench add floral arrangements according to the season. 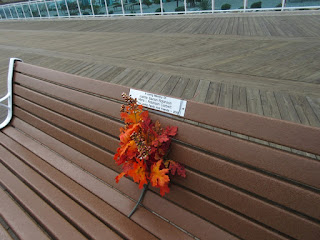 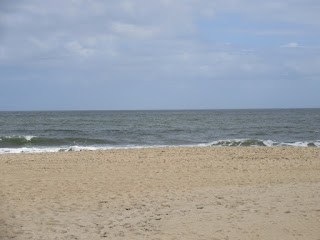 After the walkabout Hubs got me a Slurpee(This is one of our rituals when at the shore.)and we had cocktails on the balcony. 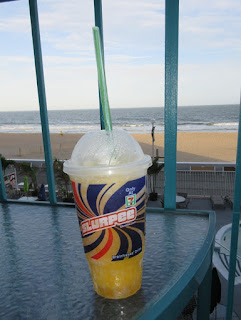 Some one enjoying the beach even if it was chilly and they needed to bundle up. 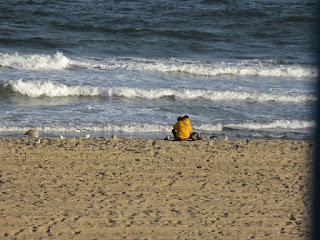 The interesting saying on the bottle cap of my latest drink..... 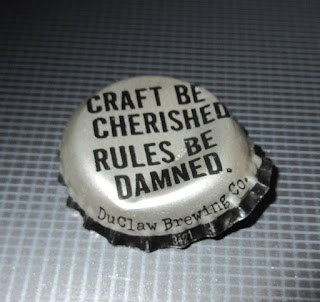 A peanut butter porter.  Sounds interesting and yummy(if you like this sort of thing)but please just don't buy it.  It's not worth the price and was disappointing........ 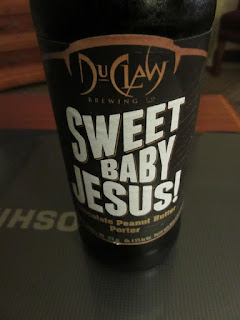 That evening we drove into Salisbury MD for dinner at Evolution Brewing Public House.
Hubs is a fan of their beer and we hadn't been to their restaurant yet. 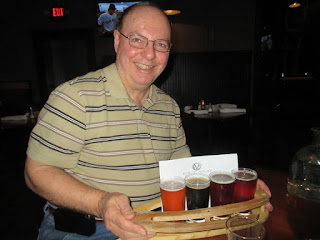 I don't recall that I drank anything other than water that evening though they had a large selection on the board to choose from. 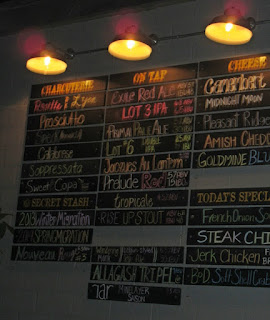 I was there to visit with Tanner!  Yep, we met up Tuesday night after she got off work at Evolution.  We had the darndest time finding the place without a GPS.  It was dark by the time we got to Salisbury and the building is an old factory type buiding right next to an active train track and has very bad nighttime signage.  We must have driven past it 4 times before we figured out this "be the place". lolz 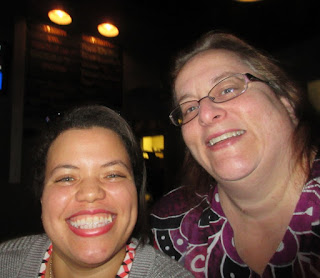 Hubs took our photo for me and then we settled down for dinner and a visit. 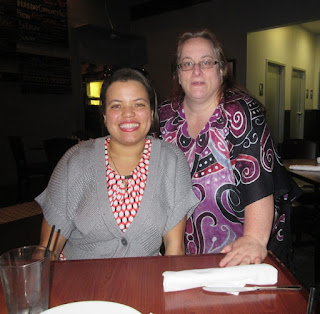 I even splurged and got dessert....doesn't this look fancy? 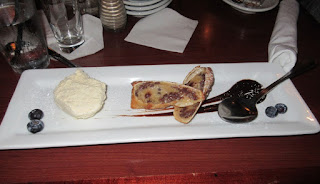 Tanner downed about half of this bottle of Patron tequila! 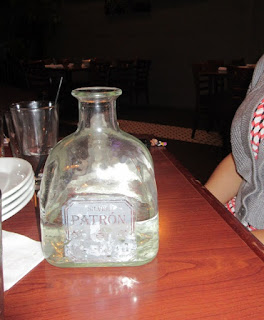 Ok, not really.  I told her I was going to say that and call her a lush because she doesn't drink. lol
The restaurant uses old Patron bottles to serve their water in. 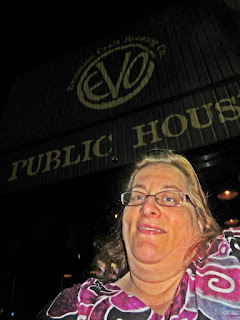 I had to tinker around with this photo to get it light enough so you could see the signage.  Excuse the very pale white, too sharply focused lady under it.
You see what I mean about bad nighttime signage?  The inside of the building was almost as dark as the sign on the outside.

After goodbye hugs we headed back to OC to our nice comfy bed with the sound of ocean waves putting us to sleep.

Sluggy
Posted by slugmama at 12:48 PM