Well the Eldest was here for 8 days visiting.  3 of those days were spent in Virginia apartment hunting.  Other than that excursion we really didn't "do" anything while he was here.
There was a trip to Berwick on Saturday, to the brewery we like but I forgot to bring my camera.....horrors!

Then last Wednesday after we got back from VA, we took him and College Boy out to Logan's Steakhouse for a birthday celebration.... 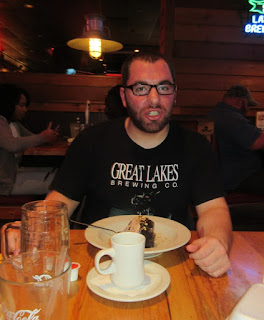 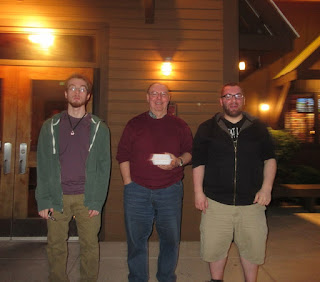 Let's just say they had drinks and we all had dessert(too much!)and this was one pricey dinner out!! 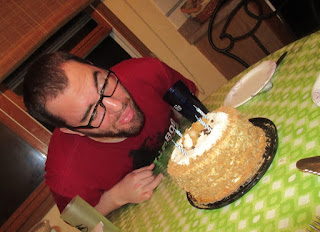 Then it was home for cake and the torture of having to listen to "Happy Birthday" in 3 different keys(by 3 different singers simultaneously). 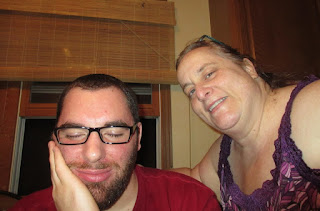 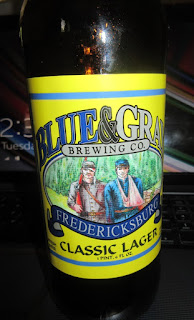 This bomber bottle of beer plus more bottles many have been opened and consumed that evening as well......

On Thursday I had my 1 week post-op cataract appointment.  The eye was 2/3rd healed up and I go back for a final check mid August.

Eldest sat around making calls, napping and playing WOW on my computer most of the day.
I made a big fried shrimp dinner for us all for a treat.  Eldest doesn't get shrimp often(and dearly loves it)because his GF is highly allergic to the little critters.

I also drug this bad boy out on Thursday.... 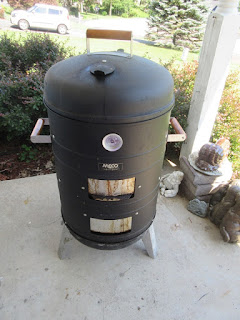 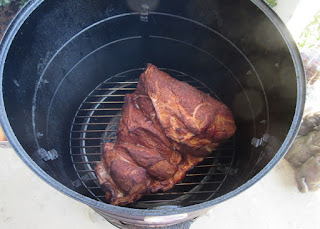 On Friday morning Eldest got in his car and left along with a hunk of smoked pork shoulder in a cooler....... 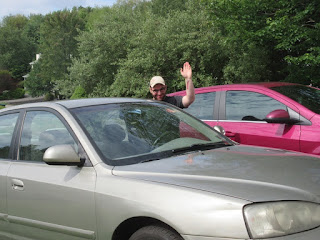 And 3 minutes after he left I got a phone call from him.  His car was acting weird and cutting off, so he turned around and came back.

Then it wouldn't start so we had the local tow guy take it up to the car mechanic we use to give it a look/fix it.

So Eldest fumed and played WOW while I went to my yearly sleep apnea doc appointment. 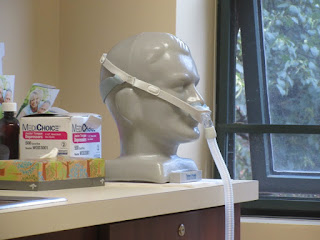 The appointment went something like this(after they took all my vitals)......

Doc-"Are you using the machine regularly?"
Me-"Yep."
Doc-"Any problems?"
Me-"Nope."
Doc-"Are you sleeping through the night?"
Me-"Yep."
Doc looks down my throat and up my nose with doc instruments.
Doc-"Ok, we'll see you in a year."

The car mechanic calls late that afternoon and says they can't find anything wrong with the car.  I told Eldest it was probably a fuel line problem from what he described what the "symptoms" were.  He had let the tank run REALLY low and probably churned up a lot of sediment in the tank, plus the car sat for a solid week on an incline and wasn't started.
At least it didn't cost him anything this time.

We had bbq pork sammiches for dinner and he left Saturday morning for Pittsburgh.  Thankfully he made it home without any more issues.  I sat by the phone for 4 hours though waiting for a "come and get me or call a tow" phone call but it never came, thankfully.

Saturday was hot and humid.  Hubs decided to attend a Pow-Wow being held that weekend near here.  I declined to go knowing it would be out in the sun and it was so hot that day.  He said it was brutal but he had a good time and he even got up and danced.  I would have liked to have gotten THAT on film! (He's a notoriously bad white guy dancer.) lolz

I puttered around the house all weekend doing laundry, sewing, dishes, cleaning and riding my exer-cycle.
And on Sunday, even hotter and more humid that Saturday was, what bright thing did I decide to do?
Why go outside week whack the flower beds and weed the garden!

I also worked on my month end blog posts(savings challenge and food/toiletries spending)too.
As bills for July are all paid up I started working on my August budget/spending plan.

The garden is slowly growing.  With all the rain this Spring/Summer so far, I haven't had to water at all.  At this point we could use a little less rain and a little more sunshine. ;-) 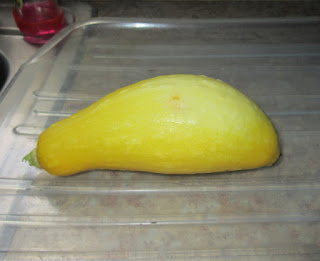 One lone yellow squash.
My garden is pitiful this year..... 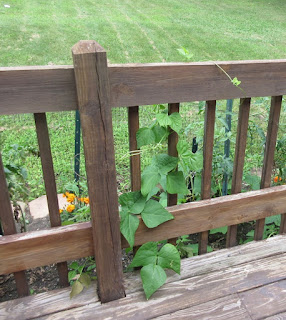 Some pole beans finally vining out. 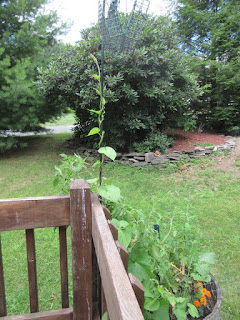 My "volunteer" morning glories almost ready to bloom though. 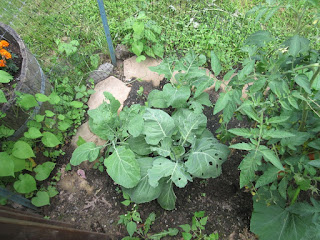 The collards still very small and the Japanese beetles have found them. Grrr 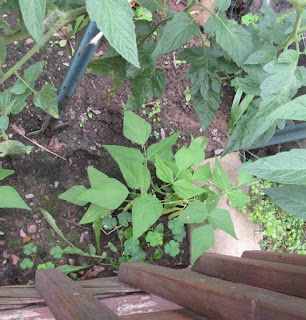 The yellow beans are turning....yellow. 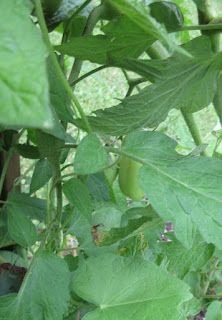 Some Roma tomatoes peeking through the leaves.  Hopefully the deer will let these ripen and let me pick them first! lolz

While I was out in the yard on Sunday sweating my brains out I noticed that the big plastic sand filter for the pool pump was still sitting where it use to filter the pool water.
The pool hasn't been operational/up in 2 YEARS(and we are not going to put another pool up)but there sits the plastic thingy still in the backyard.
It's been sitting there so long we have gone blind to it......don't even notice it when looking out onto the yard.
How sad is that?

So I had College Boy haul it down to the road Monday evening for the trash man to pick it up and haul it off Tuesday morning.
Of course, CB followed my instructions to the letter.....leaving the black stand the plastic thingy sat on behind next to where the pool use to be.
Boy, you have to be very specific, don't you? lolz
So that will get hauled off next Tuesday.

This got me thinking about what else laying around the yard/in the garage/in the house we have gone blind to that needs to GO!
I'll be spending some free time later this week, to look around here with my new eye balls and see what else can get pitched.

So I called a friend Tuesday and had a long talk about our lives.  Come to find out, friend and I are leading parallel lives with our respective husbands and children.
Sometimes it helps to rant and bitch to someone who "gets you".  8-)))

I was woken up this morning by Hubs stomping about the bedroom.  He was in a snitch because we had no water and he couldn't take a shower before going to work.
So I was up for the day and called the water company(after Hubs checked to make sure the basement wasn't flooded and this outage was just us).
Turns out there are not one but TWO water main breaks in our town, one a few blocks away, so the problem had been identified   We got water back a short time ago and just in time so I don't have to hold my breath when going into the bathroom. ;-)

I have been thinking today was Thursday all day.  I guess it was just wishful thinking as the paycheck flies into the bank account on Thursday afternoon and I am anxious to finish out the bookkeeping for July.

So while I waited for the water to return I hiked up to Rite-Aid for a few things(since I had to go anyway for a prescription)and then I went to Weis.  More on those trips later.  I blew past $300 for July food spending as of today's trip.  Sigh.

I'm up to 62.50 miles this month on the bike.  I'll probably do another 1.5 to 2 miles tonight.  Even with not being here to ride the end of the month I should surpass my 80 mile goal anyway.

The weather the rest of this week is suppose to be low humidity and in the low 80's.  No rain until Sunday.  I'll take that anytime!

That's about all I got for now.

What's going on in your world?