We were up bright and early(ok, maybe I lie?)on Wednesday morning.  Hubs went down to the lobby for some breakfast(free with the room but sadly pitiful pickings)and I took a pass on the repast and got myself ready to leave.

At last we were ready to hit the road. Day Two was a long day of driving as we had to get from north central OH to north IL near the WI state line.
We stopped to fill the gas tank before hopping onto the Interstate and I snapped this shot of the convenience store window.. 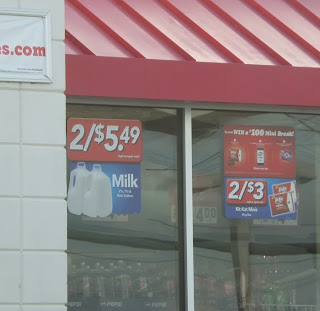 No sooner than we got onto the interstate, we saw this...... 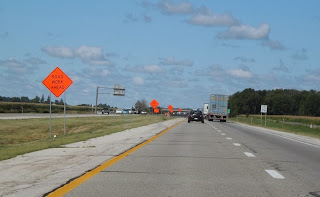 Yep, Construction Season was in full bloom in August on the Ohio Turnpike.

After we hit Indiana we needed to stop for lunch.  So we got off the IN Turnpike, or tried to.  Seems the exit booths in IN are NOT manned, so you have to pay via an automatic toll taker thingy.  The car in front of us at the exit booth couldn't seem to figure out how to pay.  We sat there what seemed like hours before Hubs made the unlawful decision to back out of the lane and get into the other lane which was empty.
Yes, we are criminal fugitives now in the eyes of the state of Indiana.

Finally got out of the toll area and ventured into La Porte IN to find some food.
I found it interesting that we were in Indiana and driving down Indiana Ave. 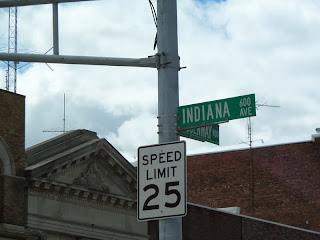 Yes I AM easily amused sometimes.....

We finally settled on Arby's since it wasn't McDonald's and we wanted to get back on the road quickly as we still had miles to cover before our official stop for the day outside of Chicago.

Then it was back onto the highway where I saw my first Triple Tractor Trailer Truck.  They are not allowed on the highways in PA..... 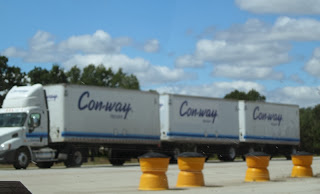 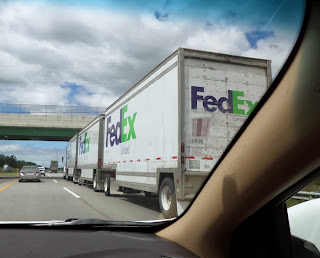 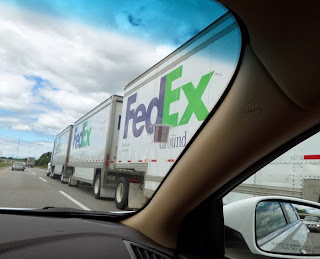 We passed this building driving down the interstate outside of Elkhart Indiana..... 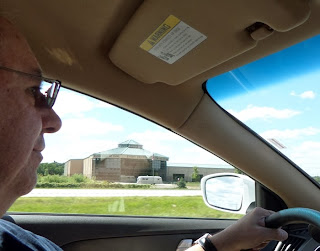 I looked it up when we got home.
It's The RV Hall of Fame.
They have a museum of RVs.
Only in America folks......

Ok, so I got bored with taking pictures of triple trucks fairly quickly so I started taking shots of these.... 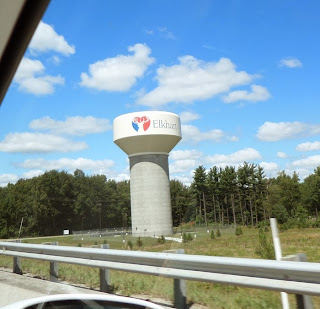 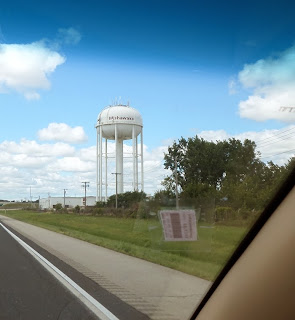 Every town we went by seemed to have a water tower with it's name on it.

Then we passed a big patch of weeds that had turned autumn colors already, in mid August....seriously?! 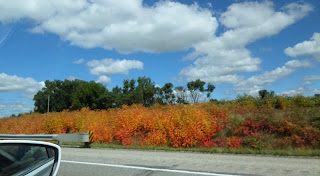 And after awhile we happened upon our first sign of what was just on the other side of the Indiana line....... 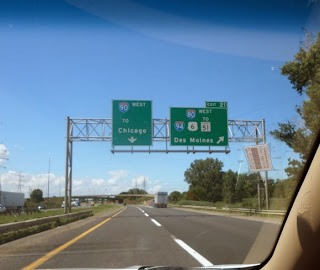 And then we hit it......Chicago traffic.
YIKES!
Now I realize when I mapquested(that is a verb, right?) this route out I made one strategic error.
I let the route take us through DOWNTOWN CHICAGO and the Skyway.
DOH!!! 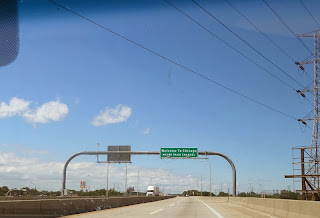 Here are some shots I took as we approached from the IN side......when I wasn't closing my eyes and praying or hanging on for dear life as Hubs zigzagged through 6 lanes of traffic looking for our lane..... 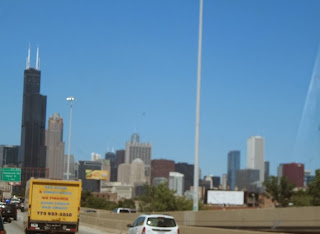 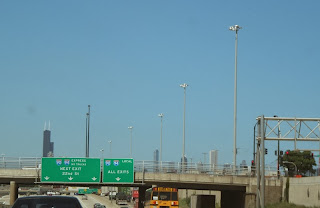 Let's just say things got a little tense about now and bad words were flying about the cabin and I could have used a belt of something strong or a tranq but had to settle for chewing my fingernails and the thought of taking pictures was frowned upon by my chauffeur.

And I will stop momentarily here to bitch about highway tolls.
Really OH, IN and IL??
It cost us over $20 in assorted tolls for a one way trip through your states to Chicago.   That's some price to pay for the fun of being caught in the cluster f*cks of traffic that your highways are!
My one and only trip to/through Chicago before this was via train and THAT was a nightmare ride as well.
I have to say that neither is my idea of fun.  How do you people who live here deal with this all. the. time.?

I've now driven in Chicago, Metro NY/NJ area and Washington DC traffic and I have to say that I'd rather deal with the latter two than Chicago's nightmare.
I think about Tanner and how she wants to move to this part of the world and I just want to shake my head...... lol

After we got out of the insanity that are the roadways around Chicago, we made tracks to our stop for the day in Palatine IL.
I was finally going to meet in person someone I've been online friends with since about 1999.

On the way, we passed this intriguing building with a police car sitting at the end of that driveway..... Turns out it is the Village Center for Inverness Illinois.
Those turret looking things are called "The 4 Silos" and it's a community landmark.
And don't speed through Inverness or the cops will get you.
Hey, I'm just sayin'....  ;-)

Finally we got to my friend Marsha's place.  After hugs and a short visit with her roommate too we went out to a local eatery, The Palatine Inn for a snack and more gabbing.
I got a plate of Kijafa Cherry Crepes and it was HUGE!  Marsha took half of it home for her roommate to enjoy.

We took a couple of photos outside by their garden before we took Marsha home and hit the road again..... 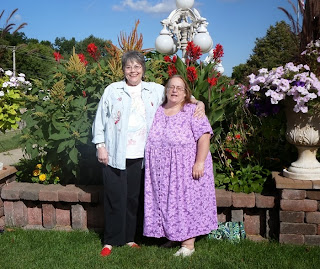 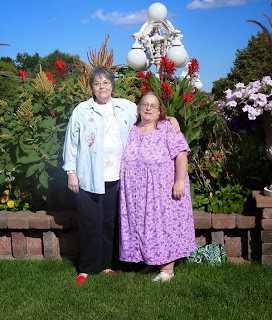 It was great to finally meet ya Marsha!

Back into the car pointing north and onward to near the Wisconsin border.

Even though it was rush hour, sooner than I expected we came into the town were we would be staying a couple of nights. 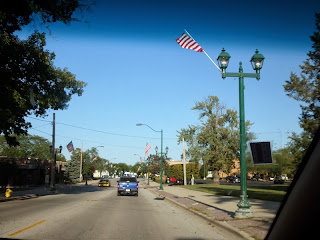 A typical little Midwestern town with a picturesque Main St. 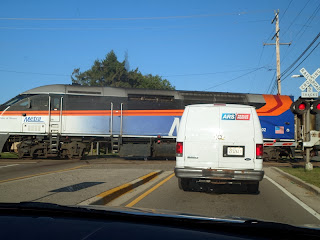 And then we were pulling into the driveway at the one and only Sonya Ann's house.
And Sonya Ann was NOT home! lolz

Ok, so her hubs Den WAS home, as was the often maligned DJ so we got a nice laid back welcome.
Sonya had run out to the store.

But as soon as she returned from her errand, the frenetic energy and mayhem ratcheted up 4 notches and the drinking began.
Sonya Ann hugged me and then put a drink in my hands saying, "drink this!"
Pretty much everything about that night afterwards is a blur in my mind.....

Oh, I do remember Den made us a yummy Chinese dinner(2 different entrées!)and it was as good or better than anything at my local Asian restaurant.  As my kids use to say to me when they were little, "You sure are a good cooker!"  And that Dennis is!

After dinner, time just seemed to fly.  Everyone was getting along so well.
I suspect all the liquor had something to do with that......hehehe

And now I am going to post a photo and Sonya Ann is going to bitch slap me for doing this....but in a loving and kind sort of way...... The woman doesn't like her picture being took and I can't figure out why not!?

Oh, I heard me some stories that night......about her kids(when DJ wasn't in the room), her in laws, her friends in RL and also the internet buddies(I bet most of you reading this had burning ears that evening....hehehe).

But the funny thing about that night is that I can't remember a single story.
Dang!  I knew the liquor that never stopped being poured was all part of her evil plot so I'd never tell her secrets.  Otherwise, she would have had to kill me and hide my body....and honey, that's a whole lot of body to be hiding!

Just go ahead and draw devil horns on all those grinning faces in that photo because I know you want to and it would be quite accurate for what was probably being said at the time that photo was snapped.

And thus ended Day Two of the Great Summer Road Trip of 2013.

Sluggy
Posted by slugmama at 2:35 PM