The time finally arrived for the big adventure of 2013 to take place--our Summer Road Trip.

Hubs sister was finally remarrying in August so since none of the rest of her siblings/family were going to go to Illinois to see her tie the knot(again), we decided we would go.
And since we were going all the way across a third of the US for this grand event, we figured Hubs might as well take some of all that vacation time he has saved up for the year, and make this a vacation.

I put out a call to friends and family, letting them know where we were headed and said we'd like to see/visit with anyone who could stand to have us around if we could work it in.  Nothing was planned ahead at this point, except for being at the wedding, so we just let the adventure grow organically from there.

By the week before we left, all the plans/stops were firmed up.
We headed out the morning of August 13th.
It was a Tuesday.

We rented a car for this trip.  Since we were traveling so many miles and my minivan is elderly(getting where it needs work and doesn't get the greatest gas mileage), it made sense not to pile those miles up on the Mango-mobile(named after my dead Chihuahua), but to spend the cash and let Enterprise's car take the hit.
We got this mid-sized beauty for the ride.
Here is Hubs posing during our first rest stop with the Adventure-mobile..... 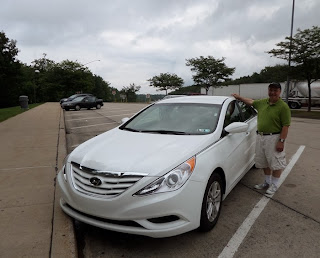 Another shot of Hubs at the rest stop area...... 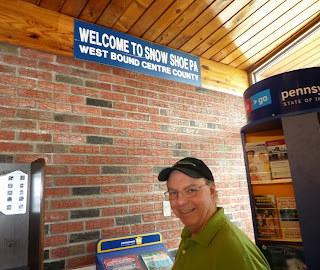 It was roomy enough for us plus had quite a bit of trunk and backseat room(which we tried out best to fill up with crap by the time we left to return home).
It even had XM Radio which was great and meant we didn't have to keep finding local station signals every hundred miles or so, amidst the static.

We were cruising along that first day, west on I-80 making our escape from Pennsyltucky, when we came upon a State Police detour.  Seems a massive accident on 80 had closed down a stretch of it totally, shortly before we got to that point, so we had to detour through beautiful downtown Brockway....population about 2,000.

You may have seen the little video I posted back during the trip when we were stuck in the traffic jam leading into Brockway.  It's a tiny little one stop light town(not even a town, a borough)with a single 2 lane main street.

Once we got to the main street, we hung a left onto Rte. 28 and headed through beautiful downtown Brockway.  About a 1/4 mile past the BI-LO grocery store and the middle of town I spotted this beauty of a house for sale.  It would make a sweet place to retire to, don't you think? 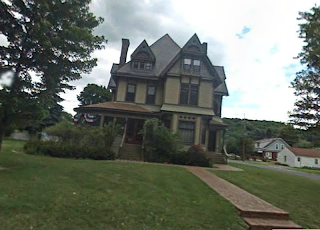 I looked it up online once we got to the hotel that night and I believe it was listed for under $100K.
You could walk or bike from there to the grocery store, the Dollar General or even Mickey D's for that matter.

Once we got out of Brockway, it was a hilly windy ride on country roads back to the Interstate.
I noticed some old farm houses we passed and from the clothes hung on the clotheslines and the lack of power lines around,  I could tell there was a community of Amish or Old Order Mennonite in this area.
And then we passed a gravel lane and I got off this shot..... 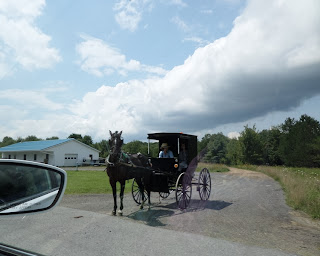 Yep, an Amish community of some size is located here. 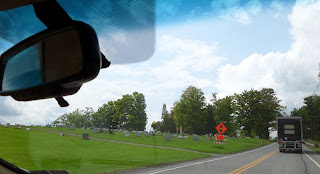 and I started asking Hubs to stop so I could do a little tombstone picture taking for F.A.G.
But we had already lost so much time on the detour and it was the first day so Hubs didn't stop. 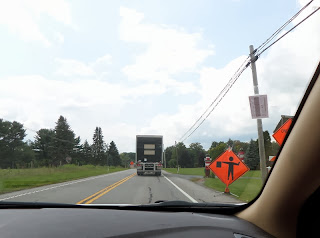 Ah yes, the joys of road construction in PA.
It never ends.....but luckily this patch was not so large and didn't hold us up much.
And you will notice that we are STILL behind that 18 wheeler truck for the entirety of this detour.

Finally back to I-80.
Then a stop for a late-ish lunch at Pizza Hut outside the town were Daughter went to college her first year, Clarion.

Then back on I-80 into Ohio and finally we arrived at our hotel for the night, in Milan, OH.
Milan OH....birthplace of Thomas Edison.
Bet you didn't know that!
And neither did I until we arrived there and I saw directional signs to his birthplace, though we didn't have time to visit it. 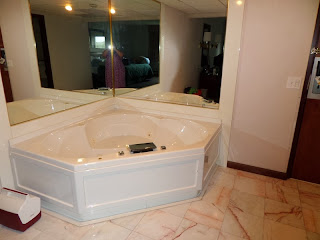 A ginormous whirlpool tub IN the bedroom.
They gave us an extra large room(which we hadn't asked for)but didn't charge us extra since the whirlpool was broken.
It would have made a very nice ice bucket IF we were throwing a party in there(and believe me, there was enough space in this room to throw one!).

Then I opened the curtains and looked out our bedroom window at the view......... 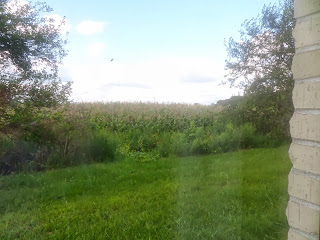 Oh goody....a corn field.  How exciting!
I guess it beats looking out onto a parking lot though, right?

After resting a bit we headed out to find something for dinner.  We drove down the highway south into Norwalk, OH.  After driving into the center of downtown, we headed back north a bit and stopped at the Fortune Buffet.
The food was pretty good except for a few items that were super spicy, which usually aren't so hot at most Chinese restaurants.
They should bottle and sell their Hot and Sour Soup as a sinus treatment.  One sip of it and my sinuses were cleared right out!!!


After dinner I had to get my photo taken to immortalize the stop.
I hope the Chinese gods don't take offense at me making bunny ears on that lion.... 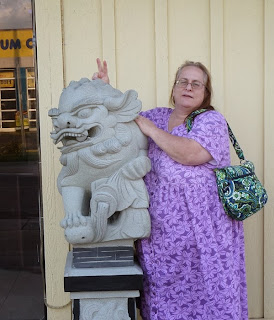 After dinner, we stopped along the way back to the hotel at a local K-Mart.  Partly to get some exercise and walk off dinner and partly because we needed to buy a "Church key" because we forgot to bring one from home.
And because we are who we are, we walked and shopped that store, buying various and sundry items and got into the car and realized we forgot the one thing we went in there to buy.
Doh.

While in K-Mart, I went over to the drink aisle to see if they carried any Vernor's Ginger-Ale.
Sister in-laws old boyfriend was from OH and since he has lived in Weehawken, NJ for many years now since she moved to IL, she was always stopping in OH to buy and bring him some Vernor's Ginger-Ale when she came out East, because it's just "Deliciously Different". 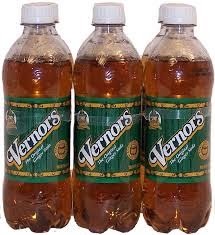 And as I took the Ginger-Ale off the shelf, I turned to face the opposite shelves and saw this..... 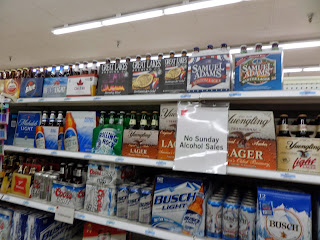 Here's a close up since looking at adult beverages is always interesting.... 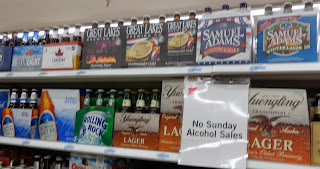 The skies opened up and angels descended from the heavens.......they sell BOOZE in K-Mart in Ohio!!!
Except on Sundays because you just can't have people getting liquored up on the Lord's Day evidently.....

So needless to say, we left with some adult beverages(Great Lakes Burning River beer and Mike's hard lemonade) to enjoy back at the hotel and to cart with us to our next stop in IL.

Thus ended Day One of the Great Road Trip of Summer 2013.
We started with the Amish and ended with booze.....nice combo, huh?

Sluggy
Posted by slugmama at 9:35 AM

Email ThisBlogThis!Share to TwitterShare to FacebookShare to Pinterest
Labels: Amish, Day one of the trip, driving to Illinois, liquor, road detour, stop in Ohio, The Great Road Trip of Summer 2013, vacation