Subtitled-LIFE WITH THE CHOCOLATE NINJA & IT'S ALL RELATIVE(S)

I was up way too early on Thursday morning.
Must have been the fact that the blinds in Anna's room were raised and I didn't know how to close them, so the rays of the sun burst upon my head at sun up.

Yah, sometimes I am not so bright.....
I didn't even KNOW there were blinds on the window until the morning we left Sonya Ann's house.
I'm surprised none of Sonya's neighbors complained about the nekkid woman parading in front of the window after we left town. lolz

So up early and no one else was stirring yet, I crept into the living room with my camera and quietly kept myself occupied.
I shot a little movie you may have seen posted before, while we were on the trip.

I sound a bit creepy in this one.....love the train whistle going off in the background......

Yes, Sonya Ann and I have the SAME SOFA in our houses!
This should have been a portent as to what was to come on this visit....

Then I went into the kitchen to get a drink of water, still being ever so quiet.  Boredom set in again, so I made another little video in the kitchen......Sonya is going to kill me for this one.....lol.....

Finally everyone else roused themselves after a night of "light" partying(*ahem*)and we got the day's festivities underway.

It was decided, mostly by me!, that we go have lunch out at a place called Uncle Mike's Pub over the state line in Kenosha Wisconsin.
It's not that far from Sonya's house yet she claims to have never heard of the place.
Hmmmm, how could she Not know about a place who's web address is www.mikelikesbeer.com??
Seriously, it's Beer Valhalla.
Go HERE and take a gander at the list of beers on tap.....83 beers.
And that's not counting all the bottled beers you can get there.....about 250 selections at any given time.

Damn!  Hubs and I might just have to move to WI when he retires.....


So after printing off a Restaurant dotcom certificate(you KNOW we had to be frugal about this, didn't you?)we all packed into SA's minivan and headed to Uncle Mike's. 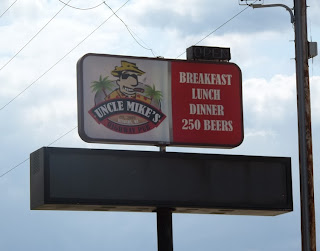 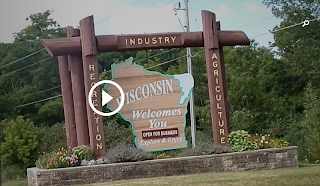 Ignore the white arrow in the circle on that shot.  When I handed off the camera to Hubs who was riding shotgun in the minivan I forgot to take it off Video mode so he actually shot a 5 second movie of that sign.....but I won't subject you to that movie, just the picture. lol


Let me just say for the record that this place, Mikes Highway Pub, is not "vertically challenged people" friendly.
There were NO regular height tables and chairs in the joint.  Just those bar height deals and bar stools around the bar.
And me forgetting to pack a step stool on this trip.....what a dummy!

So we hiked outside to the patio and sat under an umbrella'd table. ( "Umbrella'd"....That's a word, right?)
It was a nice day and not too hot....not that we would have noticed after a couple of rounds of drinks anyway.

Den attempting to hide behind the table centerpiece as if to say he'd rather not be seen with this group of folks.
Can you really blame him? ;-) 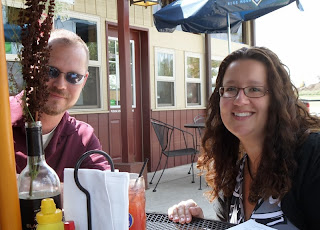 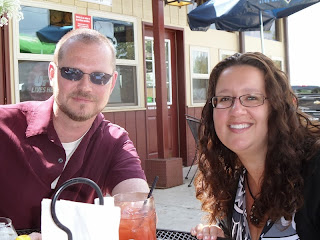 I am under penalty of death to not show the photo of Sonya Ann I took later on when she had almost finished drinking that adult beverage you see in the photo.
Ya see, anybody who knows SA knows her poison of choice is Cranberry Juice and Amaretto.
She be loving it!

She attempted to order that libation at Mike's and the waitress talked her into getting a "special" drink they make there at Mikes.  While it does have Cranberry Juice in it, like SA's drink of choice, it also has about 28 different liquors  in it.  Think about a Long Island Iced Tea(smooth and you can't even tell it's alcoholic)mixed with 6 double Jager bombs(can't feel your legs but your hair is sore hangover).
Let's just say that Mike's should consider renaming that drink the "Sonya Slayer".  ; -)

Sluggy and Hubs looking a bit too happy I'd say..... 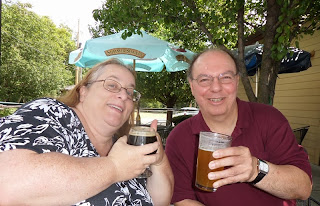 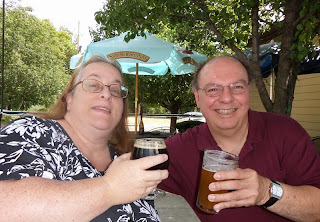 Oh what the heck...here's a little video I made at Uncle Mike's too.  You will notice that as I drink I start liberally lacing my speech with dirty words.  It's just one of the fine things about me..... 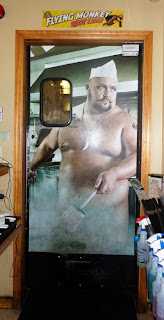 Good thing I saw this AFTER we ate instead of before!
They have this photo on their menu too-a big sweaty, hairy, nekkid cook....YIKES!!
The sight of that will make you WANT TO DRINK! lolz

And just because I can and I have no shame, I took photos of the bathroom walls....


Just the thing you want to be staring at as you try to empty your bladder. 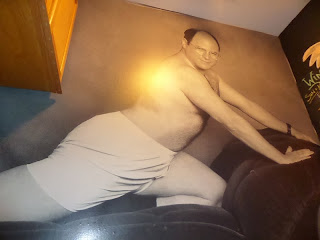 A gratuitous chicken shot for Linda....... 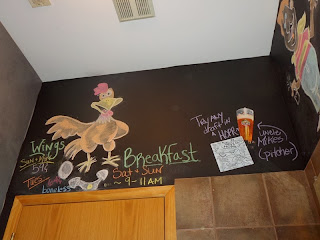 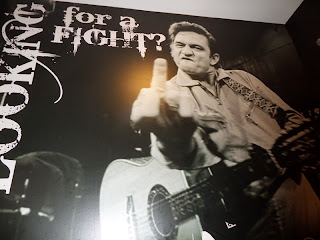 So after Uncle Mike's, Den drove us over to the Outlet Mall to walk off our liquor lunch.
And Sonya Ann's minivan's brake pads protested pulling around all that bulk by starting to grind.
Yes folks, Sonya Ann is NOT making up her vehicle woes.....cars do hate my friend......I'm calling it the Sonya Ann Car Curse.
I'm just glad the Curse didn't strike our rental car.

It was in Pleasant Prairie that I was introduced to Den's alter ego, the Chocolate Ninja.

Ghirardelli has an outlet store at this mall and it is a favorite stomping ground of Den.
You can buy all kinds of Ghirardelli choccies there.....big bars, those little squares, truffles, etc.
But the best "deal" is the DYI "stuff a clear plastic bag with as many single square chocolates as you can for $X" offer.  You can pick your size of bag and go to town filling it with a huge favorite of the chocies that they make.
You pay 1 price no matter how many you squeeze into that narrow bag.

Let's just say that Den is the Master of Filling the bag.
He is the Jedi Master of Geometry Chocolate.
No, he is simply the Chocolate Ninja.

He needs to sell instructional videos over the internet or offer to teach a class in this at his local community college. He has mastered the art of stuffing a narrow bag with expensive chocolates.

And I got a first hand lesson in Chocolate Geometry from Den. And if you watch this video, notice how quiet and shy Den, even behind those sunglasses, seems to be enjoying the attention. Nope he doesn't fool me....he's loving this.....

After hitting the Kitchen store, where I got an awesome set of new knives(these will actually CUT STUFF!), the Pepperidge Farm Outlet  for cookies and such, and Hubs hitting the Reebok (or was it Puma?) store for sneakers, we headed back to the old homestead to rest and disassemble our Bag's O' Chocolate. 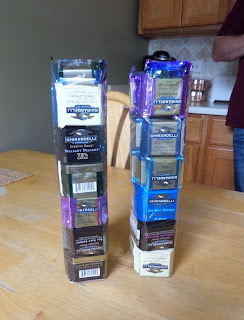 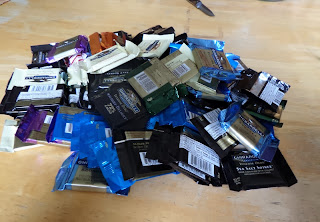 I got 108 squares of chocolate into my bag.
Den counted his and he got a smidgeon less.  I think he was just trying to NOT show off this time.  If he had more time he could have beat me my count and he has beat it in the past.

If you figure a small 4-5 oz. bag(approx. 10-11 squares per bag)of these around where I live at retail is $4.99, then I got almost 10 bags worth.
You do the math.....it's half price.
I got a much better ROI(return on investment) at the outlet than I would at the stores around here.

The only thing better is getting more Ghirardelli chocies for FREE at Rite-Aid during the Black Friday 3-Day Sale this week.  8-)

So after putting away the plunder we hauled off, I got the old laptop out and sat down to start a family tree for Sonya.
Yes, if I come visit you and bring my laptop(and why wouldn't I bring it?), you will be subjected to me wanting to make a family tree for you on Ancestry dotcom.

This is where things got a little spooky.....
I asked SA what her maiden name was and her birth date.  She told me her surname and I started typing it into the site.

She wandered off and I said, "Hey!, I've got your same maiden last name as a surname in my family tree on my mother's side.  When she came back a few minutes later she plopped down a big old handmade book of their family history that her grandfather had spent his retirement researching and compiling back in the 1960's.
That was when you had to actually travel around to courthouses and get the documents yourself.

Sonya flipped through the thing....

My eyes bugged out and we just looked at each other and said.....
"WE ARE RELATED!"

So I dug into the book quickly and think I found our common ancestor....the last one in common before our tree branched out into my twig and her twig.
While our common ancestor came to Jamestown with his son and wife in 1635, we share a couple of generations before our tree leafed out.  My direct ancestors were happy as pigs in mud to stay in Virginia from 1635 until well...ME!, but Sonya Ann's direct ancestors left Virginia for Kentucky and then Illinois in the 1800's.

Sonya & I are 9th cousins.
And yes, I do see the resemblance....and I'm not just talking about consuming adult beverages here..... 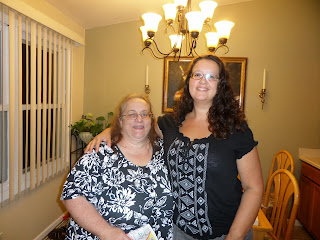 What a crazy world, right?
You just never know what you are going to step into in your life. ;-)

We all hit a local Mexican restaurant that evening, bringing DJ along too so he could practice his most excellent Spanish.  A good time was had by all and the fruity cocktails and beer flowed along with some righteous Latino food.

The next morning, which came all too soon, it was time to pack up, say goodbye and hit the road for Mattoon IL.
Another photo before leaving..... 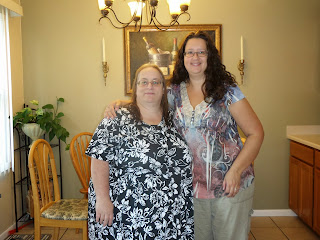 Thanks Dennis and Sonya for having us stay and treating us so well!
I started missing y'all as soon as we pulled out of the driveway.