Hamming it Up at Weis(PMITA)Markets

So I figured I'd go pick out my free ham from Weis around Thursday or so.
But when I was in the store last Thursday I noticed the stock of which seemed to be running low so after hitting Rite-Aid on Sunday I decided to brave the weekend crowds and go get that ham early(well, early for me).

And what ensued was shear hilarity. ;-)

After picking up a few other things to buy, I proceeded to the meat department to the resplendent display of hunks of pork wrapped in netting and shiny metallic paper.

It took awhile to find which hams qualified as free with 400 Weis Points but I done figured it out and settled on getting a spiral sliced ham in the red wrapping.
My 400 Points earned me a 10 lb. or less of this type of ham.

So I started pawing through the hams checking out the weights on the tags.  I quickly saw that many hams had no price/weight tag attached....wtf?!?
I found at the bottom of the display case a pile of tags that use to be attached to these hams.  All tags were for hams 10 lbs. or less.
So figuring I had nothing to lose and really at this point didn't care, I just picked up a tag and an untagged ham that seemed to weight the most by feel and took them up to check out. 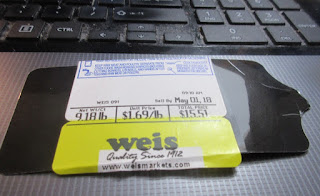 I placed my items on the checkout belt, including the ham with the detached tag on top of it.

Watching the cashier check out the customer ahead of me I deduced that said cashier wasn't the sharpest knife in the drawer as they say.

It was finally my turn so the cashier rang up my other items and then I told him I wanted to use my Weis Points to get the ham for free.  He took the tag off the top of the ham and started punching lots of buttons on his screen before deciding he didn't know how to do this and called for the front end manager.
The manager quickly keyed in the discount for the ham, a $17.59 credit.
The cashier hit the total button and I handed him my 5 coupons I wanted to use.  My total, before scanning the coupons on the register was -$4.15.
Yes, negative $4.15.
Huh?!?!

I quickly realized the problem.....the cashier never scanned the ham tag to CHARGE me for the ham but only took the ham off.
At this point, after scanning in my $7.50 worth of Qs, Weis would have owed me $11.65. lolz

So after calling over the front end manager again and me standing there telling the cashier over and over again that you didn't actually charge me for the ham yet and holding the tag out for him to take and scan it, he finally either listened to what I was saying or he got his few working brain cells to chug along and make the connection that "maybe I need to ring the ham up too" as well as deduct it. sigh 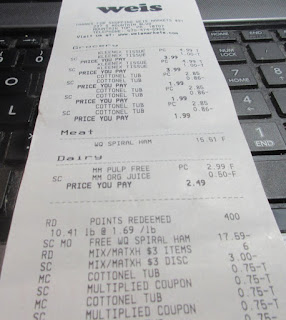 The deduction had taken off $17.59 which was more than the cost of the ham, but at this point I was NOT going to bring up the fact that I got an additional $2.08 MORE off the ham than what it was selling for.
If I had, we would have been there another hour or two and I was so over this shopping trip. 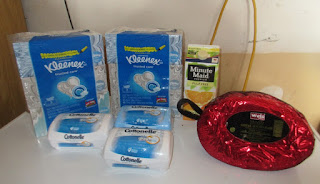 So this photo is everything I brought home from Weis on Sunday.
2 bundle packs of Klennex, 3 containers of Cottonelle wipes, a jug of OJ and a ham. 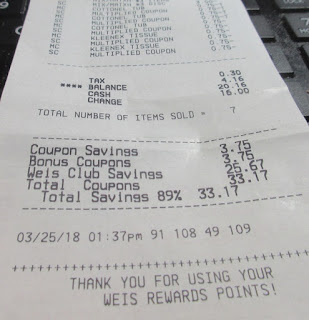 OOP total was $4.16.
So the 6 items besides the ham cost me $4.16.  Well actually it cost me $4.06 since as I was pawing through my change purse the cashier held up a dime and said it was spare change and let me use it. lolz

I saved 89%.  Too bad I can't have that sort of savings rate every day! lolz

Sluggy
Posted by slugmama at 2:38 PM

Email ThisBlogThis!Share to TwitterShare to FacebookShare to Pinterest
Labels: free ham for Easter, getting a better than free ham, Weis(PMITA)Markets