Not a lot on my plate in February.  It's a short month and the dark and cold don't motivate me to do much other than stay warm.  Add in a rough month for my health this year and it's a good thing I have a short list.  8-)

Here's the list and what did or didn't get accomplished.

* Pay Bills  DONE  If nothing else gets done, this does. 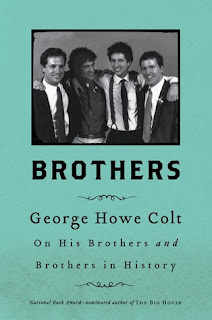 It was better than I expected it to be.  I didn't know this writer beforehand or his family but got to know them intimately in this book.  His younger brother, Ned, was a reporter for NBC news for a decade or so and was held hostage near Fallujah during the Iraqi war with his team for 3 days in 2004(this event was detailed near the end of the book).  Ned died in Feb. of 2015 of a stroke.

Having had some talks with Hubs about his family/siblings and their dynamic recently due to his sister's issues and treatment of us, we have talked about how children raised in the same environment and by the same parents(and those parents treating each child evenhandedly), how each child can come away from their childhood experience with such different perspectives and values.  This book and Colt's discussion about his siblings and himself brought that lesson home for me.
Colt also talked at length about famous brothers through history-the Thoreau brothers, the Wright brothers, the Booth brothers, the Marx brothers and the van Gogh brothers to name a few-and how their fraternal bond shaped them all.  Very interesting book if you are a fan of psychology or any of these famous brothers. 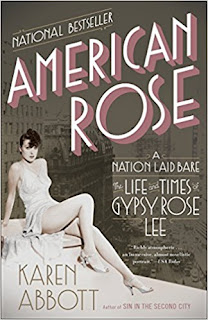 American Rose-the Life and Time of Gypsy Rose Lee by Karen Abbott.
Since I was a kid I was enamored of the Broadway Musical "Gypsy" which was the singing and dancing fairy tale version of Rose Louise Hovick's life.  Gypsy was a nationally known strip tease artist.  The author actually met with people who knew Gypsy and Gypsy's mother, Rose Thompson Hovick, including Gypsy's sister, June(who died in 2010)to garner information for the book.
Again, this book was very interesting and a "the true story behind the show and film" look at a dysfunctional family.  The mother, Rose, turned these two daughters into psychologically damaged goods and all three were survivors-both of the times they lived through and their family dynamic.  There is also a fair amount of information here about the history of vaudeville and burlesque and some of the large players such as the Minsky Brothers.
This book got me interesting in reading June Havoc's(she altered her last name from Hovick)memoirs(she wrote 2).  I doubt if I'll read Gypsy's memoir as she spent her life hiding her true self from the public.
I've got a sort of connection to June Havoc.....she starred in the original production of "Pal Joey" on Broadway and I played Melba Snyder the reporter in my college's production of that show and sang/performed the number "Zip" which was a satire on striptease and Gypsy Rose Lee and one of my audition pieces while I was in the theater world was "That Terrible Rainbow" which was one of June's numbers from "Pal Joey".  8-)) 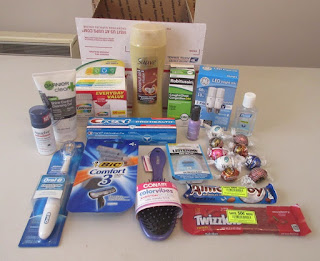 * Mail Giveaway  DONE
Crystal finally braved the snowstorm and her sickness misery and retrieved the box from the post office.  Use it all in good health!

Daughter went to Sallie's a found some dress pants she needed for presentations in her Business class and to wear on her Science conference in March to New Orleans.
The only problem was they were too short so I needed to let the hem out as much as possible. 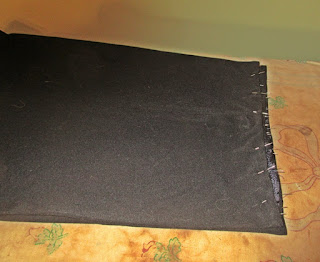 Whomever owned these pants before had been short and had hacked off the fabric in the hemmed portion with a knife or something(there was a line of stitching at the base of where the fabric was turned for the hem and all the fabric was jaggedly cut off there)before turning the pants legs up and hand stitching very badly a new hem.  I had to take out the old hem and then encase the jagged rough ends with seam binding just above where the line of stitching was before hand stitching a new lower hem. 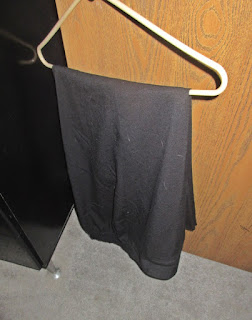 What a PITA!
Daughter also bought a blue Women's dress shirt which was missing a button.  The shirt looked brand new and it appeared someone got rid of it due to the button missing only.  There was a spare button sewn into the bottom of the shirt so it was just a matter of removed the spare and sewing onto where the button was missing. lolz
I also had to resew another button as it came off in my hand when I was handling the shirt.  Factory machine sewn buttons are held on with a tiny bit of stitching which is prone to unraveling so always check your buttons when you buy a shirt and hand sew them for security.  It only takes a minute or two(and really, shouldn't everyone be taught to hand sew a button)and may help you avoid the embarrassment of one popping off at an inopportune moment. ;-)

* Load to Sallie's  DONE  Hubs finally hauled up a load of cast-offs and got them out of the living room.

* Redo Passwords Book  FAIL  I've been looking at the book I bought to redo my passwords/User IDs in but I just haven't gotten the umph to actually do this yet.  For sure this will happen in March.  It shouldn't take me more than an hour or two to wrap this up so I can't believe I am procrastinating so badly with this.

* Do Taxes  IN PROGRESS  I handed off taxes to Hubs(after gathering the initial paperwork)as he wants to handle it now that he's retired.  He is driving me crazy though as he works on it in drips and drabs and doesn't just DO IT!  And he insists on using software(that we have to pay for!)while I did it for years and years myself the old fashioned way.   Our taxes aren't so complicated we need to pay to do them but he's afraid of being audited and things doing them and mailing them in is now a red flag as most folks electronically file.  Whatever.  Just freaking get them filed already!!!

* Load to Food Bank  DONE  I finally got a good day when they were open to accepting donations and hauled up 6 jugs of laundry detergent, 4 bottles of shampoo and 4 bags of assorted canned/boxed/pouched food.

* Plan possible 2018 Travel  IN PROGRESS  A few ideas have crossed my mind but nothing has gotten to the make reservations stage yet.  I am just feeling uninspired about traveling right now.

* Work on 2018 Goals  Again, IN PROGRESS  We've got one big goal we've been working toward-selling the house in LA.  Keeping it another year and having Daughter and BF rent it from us after she gets her degree doesn't make sense to our bottom line so it's going back on the market with a better realtor.  I want it sold this year, period!  Dealing with people in Louisiana in a business relationship has been one headache after another and I want to leave it behind.

So that's what's happened here in February.
How was your month?  Did you conquer any goals last month?

The March Giveaway is CLOSED.
Come back in April for another Giveaway.