The "Mixed Up Thanksgiving" Edition..... 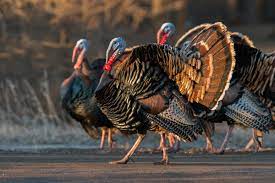 We went over the son in-laws folks house on Saturday for Thanksgiving.  There were a ton of people there we didn't know(half brothers, wives, grandchildren, etc.)so that was different.  Just another change to what we are use to. 8-)
Daughter might want to do something on Thursday though that's just the 4 of us.  We'll see what happens.
Onward to the meal planning!
This is what was planned.......
1. Sunday--Chicken Fajitas, Spanish Rice
2. Monday--Fried Catfish, Asian Cole Slaw, Cornbread
3. Tuesday--Teriyaki Chicken Stir-fry w/Veggies, Rice
4. Wednesday--Beef Pie w/Veggies and Cornbread
5. Thursday--Leftovers
6.  Friday--Shrimp Scampi, Linguine, Veg TBD
7. Saturday--Thanksgiving Dinner w/family
And here's what actually happened........
1. Sunday--Chicken Fajitas
2. Monday--Fried Catfish, Asian Cole Slaw, Cornbread
3. Tuesday--Teriyaki Chicken Stir-fry w/Veggies, Rice
4. Wednesday--Leftovers
5. Thursday--Beef Stroganoff, Sweet Potato Fries
6.  Friday--Leftovers, Big Salad
7. Saturday--Thanksgiving Dinner w/family
I wasn't feeling well Sunday so Hubs had the Fajitas and I ate an apple.  I used the leftover rotisserie chicken I bought the week before and put it into the Fajita filling.
What got put into the freezer last week....
*  a 10+lb. turkey
*  5 more lbs. of Bacon
*  3 boxes of pie crust
*  2 bags of veggies
*  3 pies
What got taken out of the freezer and used...
*  some Catfish
*  a bag of Teriyaki Chicken
*  a bag of Stir-Fry Veggies
*  a bag of Sliced Beef
I busted my budget and spent $237.79 last week. Just 2 Kroger and 2 Walmart trips to put stuff in the freezer and pantry to stock it as I found deals and a few necessities.
I figure since we won't be buying food in December(doing a sort of grocery fast and will be away too then)I can go over as what I buy will "last" for 2 months.
This brings our food/toiletries/paper goods Total to $770.46 for November so far.
There are 9 shopping days left in November.
I've earned $160.56 on Ibotta in November.
I've earned $0.00 on Checkout51 in November.
I've earned $15.75 on Coupons dotcom in November.
I've earned 8,667 points from shopping on Fetch in November.
I earned 5,416 points from food shopping on Shop Kick in November.
I've earned 1,321 pts. from food shopping on Swag Bucks in November.
That's $176.31 in rebates(not counting the Shop Kick/Swag Bucks/Fetch)on $ in grocery spending so in reality it's $412.35 spent after the 3 rebate apps I count.
My savings percentage for the last week was 47.98% and the monthly savings total for November comes in at 39.25% so far.  Gone are the days of 70% savings rate with Rite-Aid. 8-((
Leftovers going into this week....Chicken Fajita filling, Teriyaki Chicken and Stir-Fry veggies
Here is this week's "food plan".....
1. Sunday--Leftovers
2. Monday--Salad, Leftovers
3. Tuesday--Chicken Strips, Mac and Cheese, Cabbage
4. Wednesday--Beef Pie w/Veggies and Cornbread
5. Thursday--Some Form of Turkey, Rutabaga, Mashed Taters, Stuffing, Cranberry, Pumpkin Pie
6.  Friday--Shrimp Scampi, Linguine, Veg TBD
7. Saturday--More Leftovers
Some meals not made last week just carry over into this week.  We're working on leftovers at the moment too. ;-)
What do I need to buy to fix everything on this menu?  Not sure.  If I have to get some form of turkey(the whole one's won't thaw in time to cook one but we don't want all those turkey leftovers right now)I'll spend a bit more for November.
No worries as we have the cash to cover all this food and nothing goes on a credit card that we don't pay off at month's end. 8-)
What is getting fixed and served at your house this week?
Was last week's plan successful, did you go off plan or did you not even plan what was going to be eaten last week?
Any deals on food at your stores this week?

Email ThisBlogThis!Share to TwitterShare to FacebookShare to Pinterest
Labels: back to meal planning, eat your leftovers, high grocery spending, inflation, make a menu and be flexible, restocking the pantry