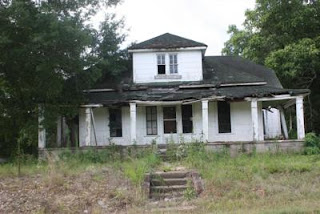 Not the house we bought. lolz

So Hubs and I were in no hurry to buy a house in Louisiana since we had an open ended invite to stay with daughter and son in-law at their house plus our house in Pennsylvania had just gone on the market and wasn't sold yet so no big pool of house money yet to put towards the new abode.

But I happened to be browsing on Zillow a couple of days after we arrived here and saw a house that met most if not all our criteria.  It was a well-maintained brick stick-built home of about 1800 sq. ft. on over an acre in a rural setting in East Texas.  From the photos you could tell it was an "estate" situation-someone had died who had lived there many years(the furnishings were circa 1970's)and the inheritors just wanted it sold for the $$$.  It was listed for $159,900 which was a great price for this house!

Zillow put me in touch with a licensed realtor in E. Texas and he attempted to contact the listing agent for a viewing.  While we waited for said agent to get back to us the realtor said he's take us to see some other houses(what the heck!  we had nothing else to do)in Texas.  We saw exactly 2 houses with he and his wife(also a realtor).  Both were overpriced for their condition(in the low 200's but had many condition issues we'd have to pay $$$ to fix and make the houses livable).  They were also more than an hour from daughter's place.  Later we found out that this area was one that was in demand due to the schools so houses there were going for over-inflated money even in poor condition.  We also did a drive by of a house we saw online but couldn't get a showing for that day and ruled that one out as well.  This realtor also kept pushing us to see a house well outside our price range(this one was $280K)and a distance from LA.  I think he was the listing agent for it and the seller was desperate to sell and wanted ANY offer.  We declined to see it as it was too expensive and too big and two stories.  Then he said his daughter was an agent licensed in Louisiana(he was only licensed in TX)and offered to hook us up with her, which we said ok to.

Now let's back up and add that about a week after we left PA the housing market in that area basically crashed when the FED raised interest rates .75%(They have raised rates yet again as I type this.)  Even though there was a limited number of homes in our town in PA for sale and about 5 what you'd call comparables to our home, nothing was selling.  The "your house is going to sell quickly" spiel turned into "you should be prepared to drop your asking price soon" one. sigh.

Hubs and I had figured we'd wait until our house(which we were assured would sell quickly for close to asking price)sold and then begin the new house hunt in earnest with the check for the sale of our house tucked into our account so it could fund the new house purchase.  But with the market freezing up and us getting tired of sleeping on inflatable beds(yes troll, I can fit my massive body on an air mattress without blowing it out!)our plan soon changed.

So the new plan was to regroup, go through our finances and to see how much we could afford to spend without the PA house proceeds on a new abode in LA.

Our requirements were 3 bedrooms(so we could have some separate spaces for ourselves), one floor(because I have a bum knee and climbing stairs as you age isn't fun or practical at some point). 2 bathrooms(1 ensuite with the master bedroom and a guest bath), possibly 2 living areas(as we had 2 sofas), on at least an acre of land so we didn't have to be in close proximity to potentially bad neighbors.  A dining room was not a consideration.....had one of those in PA and barely used it except for Holidays so room in the kitchen for a table would suffice.  A garage would be nice as well but we knew many homes in this area only had a car port.

So we figured out how much we could afford to yank out of various non-retirement accounts and then contacted the realtor in Louisiana to begin looking around for a new house.

Email ThisBlogThis!Share to TwitterShare to FacebookShare to Pinterest
Labels: looking for a new home, Louisiana, moving halfway across the country, moving in retirement, Texas