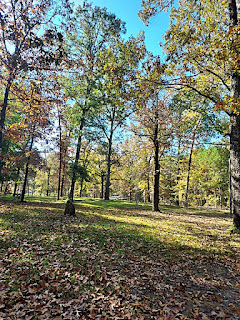 This is a picture of part of daughter and son in-law's front yard I took last week as November rolled around.  Can't see any neighboring houses from this vantage point as it's a 4+ acre lot. Their lot has lots of huge oak trees and very few evergreens thus lots of leaves falling.  But since it's deep South many trees are still green or have slowly turning leaves still on the trees so there isn't the vibrant colors of Fall like in PA.  It's still in the lower 80F here.  Back in PA it's in the 50's for a high.
We moved out entirely on Friday of last week.  It's been unpacking, lifting and toting since then.  Trying to cook with not all the kitchen equipment found and unboxed yet.  Missing spices too. sigh.  I'm trying.
Onward to the meal planning!
And here's what actually happened........
1. Sunday--Pizza Hut
2. Monday--something Daughter made
3. Tuesday--can't remember, some meal from her box kit
4. Wednesday--ditto
5. Thursday--left to our own devices, I had a PBJ.
6.  Friday--TV Dinners
7. Saturday--Roast Chicken, Caesar Salad
What got put into the freezer last week....
*  3 bags of frozen veggies
*  4 lbs. of bacon
*  7.61 lbs. of ground beef
*  4 lbs. of catfish fillets
*  5 lbs. of gulf shrimp
*  4 TV dinners
Lots of shopping and putting stuff in the freezer to stock it as I found deals
At Kroger I found Smithfield bacon for $3.99 lb. and some clearance Waygu ground beef for $4.59(cheaper than their reg. ground beef!).  At Super 1 Foods there was a 4lb. box of catfish for $14.97 and 5lb. bag of gulf shrimp for $19.85.  I also picked up various tv dinners for $2.47 each wyb4 there since I am still gearing up to cooking meals.  I also hit up Super 1 on Tues. or Thurs. as they have a 5% Senior discount on everything in the store those days.  Ya got to save the money were you can. ;-)
What got taken out of the freezer and used...
*  2 TV dinners
I spent $272.82 on food/toiletries/HBA this last week at Kroger, Super 1 Foods and Walmart.
This brings our food/toiletries/paper goods Total to $272.82 for November so far.
There are 23 shopping days left in November.
I've earned $31.77 on Ibotta in November.
I've earned $0.00 on Checkout51 in November.
I've earned $4.00 on Coupons dotcom in November.
I've earned 2,957 points from shopping on Fetch in November.
I earned 800 points from food shopping on Shop Kick in November.
I've earned $6.30 from food shopping on Swag Bucks in November.
That's $35.77 in rebates(not counting the Shop Kick/Swag Bucks/Fetch)on $272.82 in grocery spending so in reality it's $237.05 spent after the 3 rebate apps I count.
My savings percentage for the last week was 30.77% and the monthly savings total for November comes in at 30.77% so far.
Leftovers going into this week....roast chicken.
Here is this week's "food plan".....
1. Sunday--Kielbasi on rolls, asparagus
2. Monday--Chicken Fajitas
3. Tuesday--Spaghetti and Meatballs, Salad
4. Wednesday--tv dinner
5. Thursday--leftovers
6.  Friday--no clue yet
7. Saturday--no clue yet
What do I need to buy to fix everything on this menu?  I have everything except mushrooms, and I haven't found my jar of minced garlic yet so might have to buy more.  I also need other staples still like rice and potatoes so meals are a bit limited still.
I am not giving myself a food budget this month as I am still restocking and like someone said, it's a good time to be stocking with the holiday deals coming up.  Unless I desperately need an ingredient I am waiting on deals to turn up.  Staying under $500 would be nice though.
What is getting fixed and served at your house this week?
Was last week's plan successful, did you go off plan or did you not even plan what was going to be eaten last week?
Any deals on food at your stores this week?