Groceries and Eating-Out, The Balance


Our August Eating Out totaled $123.42.  Most of that was just take-out meals but 1 meal while traveling that technically happened late July but was on the August credit card bill.  I like to stay under $100 per month(unless there is something special going on that month-holiday, vacation, etc.)so this month was a win.

So far for September the Eating Out totals $280.62.  4 meals of that was going out to eat with family or friends, 1 meal was going out after leaving the ER late at night and we hadn't gotten dinner beforehand.  The rest of that was take-out while I was unable to walk and cook.  Totally understandable since Hubs doesn't really cook.  He could make a few things if pushed but his work has been nutso lately and he hasn't been inclined so we bite the bullet and order out.
We still have the family reunion trip coming up and there will be at least 5 meals eaten out during that excursion-lunch on the way, dinner at the motel, dinner the night of and breakfast the morning after(plus the dish I have to make to take to the lunch at the FR).  We'll probably skip lunch on the way home and will eat when we get back here as there will be leftovers sitting in the fridge to use up.
The meals out, if we also need to pay for our eldest son's meals, will run at least $150 total.

The up side of high eating out totals is having spent little on groceries in September as if you aren't cooking you don't use up the groceries you already have, right? lolz

I went to Weis(PMITA)Markets Thursday after my PT appointment as the ad started that day. 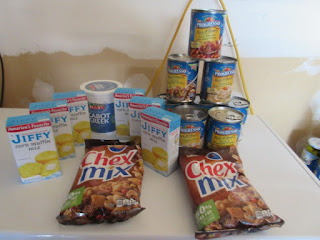 I didn't even browse the clearance meat or produce deals as I wouldn't have time to deal with them before leaving town.
I will go back next week sometime to get two items--pork ribs for $1.97 lb. and whole chickens for .87¢ lb.
Since the weather is still warm I want to smoke some ribs soon.  I might throw in something else too like a hunk of salmon or one of those whole chickens if there is room and we can eat off that too next week.

I like to have some canned soup on hand for cooking emergencies, "sick person food" and for lunches.  I can also enhance some of these with more veggies/sodium-free stock to make them healthier or use them as a base for a sauce of sorts.
I'm not a big fan of Chex Mix but we can use these as snacks for the road trip or I can pack them off to College Boy.

They also had Jif cornbread mixes for .60¢ each so I stocked up and bought 6.  This item never gets down below .67¢ here anymore(so anything less than that is my buy price).  I remember when they use to run 4/$1. sigh
This mix is a bit sweet for eating(it's a Yankee formulation after all)but sometimes it's just right(like when I make my Beef Pie).

I saw that the large containers of plain Greek Yogurt was finally on sale again and grabbed one.  It would have been nicer if I had a Q for it but I won't complain.  I used this to substitute or cut with sour cream in some recipes, as well as eat it with honey, seeds and nuts some mornings for breakfast. 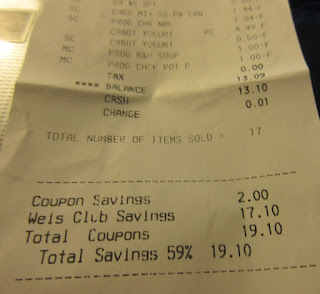 So if you add in the Eating-Out and the Grocery Monies Spent in August we ended with $593.38 spending for both categories.
At this point for this month, take the $280.62 with the projected $150 yet to spend on Eating-Out and pair it with the Grocery spending of $139.74 and we are at $570.36 for September's outlay.
Basically we are at the same amount of spending for both months.

October will be another high Eating-Out month for us due to more traveling so I am conscience of getting the grocery spending down to balance it all out.  While not on the road I'll try to cook and have us eat at home and stay away from the Take-Out, but also try to spend less on the grocery budget.  We have sufficient stockpiles of groceries here to just eat from the pantry in October except for what is absolutely needed for a particular recipe.

Sluggy
Posted by slugmama at 7:44 AM

Email ThisBlogThis!Share to TwitterShare to FacebookShare to Pinterest
Labels: spending on food out versus spending on groceries