*  We got word this past weekend that Hubs sister, who just got remarried Aug. 2013(and we traveled to the Midwest to attend the wedding ceremony), is getting divorced.
Things just didn't work out due to her husband's issues so instead of just riding it out until he drinks himself to death and being miserable, she's bailing.
I don't blame her at all not that I would have married the guy in the first place, but that's just me.
8-(

*  College Boy has the promise of a Summer job in a town nearby here.  And hopefully it's more hours than the bakery he worked at in high school use to give him.  He also has a possible second Summer job if the first one doesn't keep him working enough hours per week.
Being broke his first year of college has spurred him into going back for his sophomore year with the cash he saves from this Summer employment.  Hopefully he feels confident enough in his course work next semester that he can try to get a part time job while attending school.  That would help a lot to keep him from draining his college fund at the alarming clip that it is now being depleted.

*  Now seeing as College Boy will have employment this Summer this also means that he needs transportation.  We are down to 2 cars here--my purple bop around town vehicle and the old used Malibu(which was the 3rd kids' car)he took over when we donated his Elentra last Fall.
So Hubs has decided to get a new, used car within the next month.  He may even buy it this weekend.
He found a good deal at Enterprise(the car rental people-they also sell cars)on another Malibu.
We'll be using part of his yearly Bonus which we received in February to pay for this.
Not only does this mean forking over $$$ for a new-to-us cars but having a third vehicle will mean our car insurance will again go up.  *sigh*  Well that reduction in insurance was nice for the 7 months it lasted......

*  Speaking of bonuses--Hubs and I need to sit down and talk about how the rest of the Bonus money will be spent this year.

*  We need to pay for a bathroom redo this year so most, if not all, will go toward that.  It's a redo but we aren't going high end.  Just replacing worn out fixtures/cabinet/floor/toilet and taking out the moldy tile(yuck!)and fixing the wall behind where the tile is and installing a new tub.
Pretty much everything is being changed because we can't even THINK about selling this house until this work is done.

*  I would also like to get a freezer as I never replaced the one that died 3 weeks after buying it.  We've been limping along using the small compartments on two fridges-the one in the house and the older one in the garage.  I am figuring on getting a small chest type since we don't need/use as much food as when all the kids were home.  A small freezer will be adequate and will fit just fine where the older fridge resides in the garage.

*  I just saw that cable channel TLC is bringing back another episode of "Who Do You Think You Are?" this Sunday.  And we no longer have cable.
Bleh.
I suppose eventually they'll put the episodes online or on YouTube and I can catch them there.
So don't anyone give away the endings to me, ok? lolz

*  We are set to travel to Louisiana in mid May.  The Daughter has gotten time off from work so we are trying to plan some activities and such.  There is the Bonnie & Clyde Festival(weird)and a War of Northern Aggression Battlefield/Museum(boring) and a new brewery to visit(hic).  I just hope the weather down there in May isn't too humid.
I am still trying to set up motel reservations that don't cost an arm and a leg.  I don't want to stay where we were last trip there(too far)but I don't want to spend a fortune.  I found a reasonably priced motel but the reviews mentioned roaches and crack 'hos in the lobby........ick.

*  I go to the eye surgeon on Monday for my cataract surgery consult.  Still have forms to fill out before then and decisions to make about what type of lens to get.....the regular or the corrective lens.
I am sure insurance won't cover the corrective lens as much so that decision may be already made due to cost differences.  I still don't know when they will cut my eyeball open but it had better be well before the middle of May.

*  Easter is sneaking up on us soon.  College Boy won't be here for it this year, so I've got to decide if we just have a small meal Hubs and I or invite the brother in-law and nephew over.  We'll probably just hide out from family this year and relax. ;-)

*  Speaking of genealogy......I've already heard back from the Huguenot Society folks.  On the positive side of thing, there is someone who was confirmed into the Society using my Huguenot ancestor already and our lines are in common down to my 2x GGs, which means if she agrees to let me use the information in her application, I only have to prove 4 generations back from myself instead of 8.  It will be much easier to obtain documents going back to the 1800's rather than the 1600's, but while easily to get, it will cost me for official state vital statistical forms.
On the negative side here, the cost to apply is $20.  Then there is the annual dues to the National Society($25 or if over age 50 you can pay a one-time lifetime membership fee of $500) and then there are the yearly State fees for your chapter($10 or included in the lifetime membership fee).
So I'll be out $55 to start and then $35 each year.....or $520 in fees now and forever more, no more fees for my lifetime.   If I pay for the lifetime I'll have to live another 13 years to break even and after I am 69 it's all gravy.  ;-)
I also need up to 8 different vital statistical forms at $12 a pop to apply, so another $96 + postage.

*  I bought that Steve Jobs biography that came out a year or so ago at Ollie's(Good Stuff Cheap!) It was less than $3 with my discount card.  I'm about 2/3rds of the way through it and I can safely say the man was a narcissistic jerk!  I am glad I never worshiped at the Apple altar......

*  In other news, my oldest son is going to an educational job fair in Pittsburgh this weekend.  His GF is finishing up her degree in nuclear medical imaging and by August they will be ready to relocate so he has begun the search for a "real" job in his field.  He has a teaching degree in History and wants to land a job in a high school setting.  Please keep him in your thoughts this weekend that he gets some interest from the school districts in a state he has targeted and that his GF can land a job in her field in the same city/area.

*  Oh, and Happy Spring!
I went out for an Rx first thing this morning.
Now look at my backyard...... 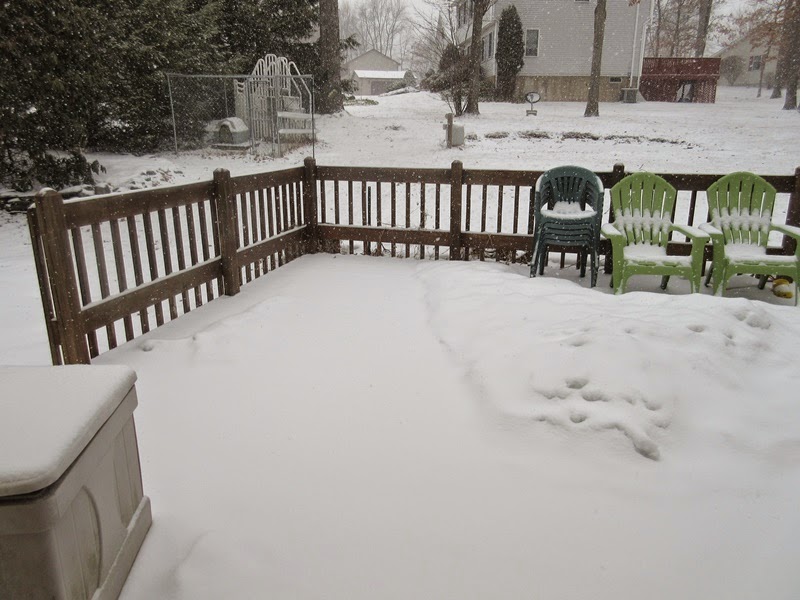 Mind you yesterday this ground was bare, save a few areas of leftover snow.