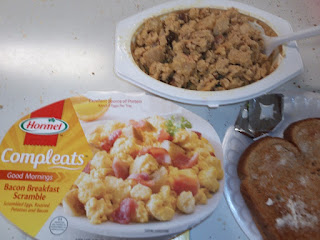 When Ex-College Boy had to take everything out from under his bed when the Daughter took that bed frame to Louisiana with her he found a box of food I had sent off to his college apartment with him his first semester of his Senior year.  Among the foodstuffs were two Hormel Compleats breakfast meals.
Hubs and I took the 2 breakfast ones with us to New Hampshire last week for options if the motel breakfast was sad and/or as a change for the motel continental breakfast since we were going to be staying there 5 nights.
Well we broke out these Compleats on Wednesday.  You can see in the photo above the package "art" compared to what the bacon breakfast scramble actually looked like.  And let me tell you for the record that it tasted WORSE than it looked! lolz
I knew it would be over salted.  I tried to eat it with my eyes closed so the nasty look wouldn't prejudice my taste buds but GAWD!......the texture was just something I couldn't get past!
So breakfast was just the toast you can see in the right bottom corner as this nasty Compleats went directly into the trash can.
Amazingly Hubs ate his all up......*shudder*.  I've always said Hubs will eat anything, anywhere and at any time and this just proved I was correct. 8-)

Onward to the meal planning!
This is what was planned--

Eating was sort of strange(as in not normal/regular)last week at PorcFest.  We either ate turkey sandwiches for lunch(we took bread from the free breakfast at the motel and bought sliced deli turkey from Shaw's), ate from food vendors at the campground, or we went out for lunch(Thursday).
Dinners were either leftover turkey sandwiches at the campground, pastries we bought in Lancaster during the day or Hormel "Compleats" and fruit cups we brought with us from home.  Dinner when we ate it was around 10 or 11 pm as that's when we got back to the motel(except Thursday when we got in before 8 pm as it rained ALL day and I wasn't feeling very well).

What got put into the freezer last week.....
* nothing what so ever as I wasn't home

What got taken out of the freezer and used last week.....
* nothing what so ever as I wasn't home

A small trip to Ocean State Job Lot as they opened the weekend before we left and 2 small shops at Reny's and Marden's in Maine on the way to NH brought the food/toiletries spending last week to $49.45 and my June total to $207.81.

My savings percentage last week was 47.08%(without Rite-Aid trips)and June's monthly savings total so far comes to 54.25%(w/out R-A).

I have 6 more food shopping/spending days in June(counting from this past Monday).

We had lots of food waste while we were gone.  Ex-College Boy didn't seem to eat anything(I left him Domino's gift cards and he just seemed to get pizza and didn't touch any food here).  I threw out corn on cob, Cole slaw, cabbage, zucchini and rice but was able to salvage a couple of things for the freezer.
So unhappy about it.  If I'd known he'd just eat out or eat pizza I'd have frozen or had Hubs eat stuff before we left.
Oh well.....sometimes you loose the game. 8-(

This week will see 4 new meals cooked, 3 nights of leftovers/FFY, and 0 nights of Take-Out/Eating Out.

What needs buying for this menu? We are out of milk and tomatoes and that is all.  I'll need to get fresh produce, lettuce, onions, etc. later this week or early next week. I am hoping to keep the food spending to $50 this week.

What is getting fixed and served at your house this week?

Was last week's plan successful, did you go off plan or did you not even plan what was going to be eaten last week?

Sluggy
Posted by slugmama at 9:30 AM

Email ThisBlogThis!Share to TwitterShare to FacebookShare to Pinterest
Labels: eat your leftovers, make a menu to guide your meals for the week, meal planning is good for you