The Weekend That Was.....Camp, Being Child-Free & Donuts

So school ended last Wednesday here and Thursday & Friday were spent getting #2 son packed up to go to camp.  This year his 1st week there will be spent in Leadership Training.  Next summer he will do 2 weeks of Counselor Training and if he finishes at the top of his class he'll be eligible to start working at camp for some part of that summer season.  Of course he won't be old enough to be a Counselor or an Assistant but he could get a job as a Kitchen Grunt.  But we'll/he'll worry about that next summer.

So we headed across the state Sunday to camp.
First stop was dropping off stuff to #1 Son and Daughter.
The only way I got them to pose for a photo with their dad was to shame them.  They totally forgot that Sunday was Father's Day.....oops! 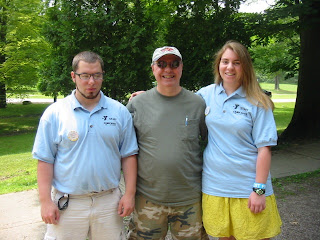 After that I walked across the field to the cliff to get an eyeful of Lake Erie..... 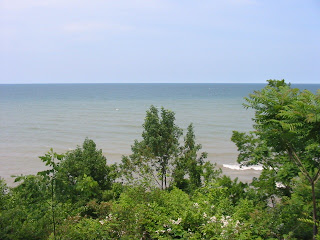 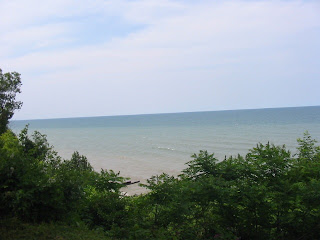 There was a nice breeze coming off the water.  Every time it blew through I caught the scent of wild lilacs on the warm air.  The smell was practically intoxicating!

The "Point" or the camping area where the older teens bunk was blocked off to car traffic this year, so all their gear had to be carried in by hand.  While Hubs helped #2 hike down to the campsite with his stuff I wandered around up on "the lawn" where the younger boys bunk.

They have a couple of massive trees on the lawn..... 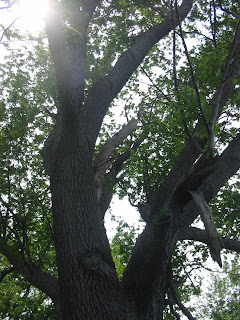 Here is a "cabent" where the kids sleep.  It's a cross between a cabin and a tent, thus cabent.  It's a cabin frame and roof but the sides are canvas and roll up and down.  There are wooden bunk beds built into the structure. 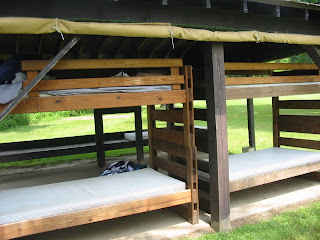 These are empty but will soon fill up with eager campers.

And here are the little boys across the way arriving and settling in for a week of fun times! 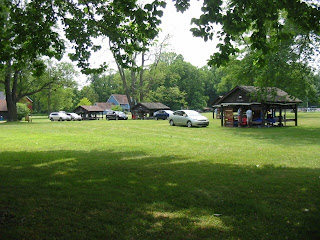 Hubs and I left and had a late lunch in a nearby town at a restaurant of his choosing, before heading back down the road toward home.
It's such a long trip that we stayed overnight at our usual motel stop a few hours from home.

As we had eaten so late we weren't up for another meal before bed.
Hubs decided he wanted to go across the street to the Dunkin Donuts and get coffee and a few donuts for a snack before turning in for the night.

20 minutes later he storms into the room empty handed.  This DD closes at 9pm(well it says that on the front door).  He got there at 8:37pm and the door was locked.  The employee inside said that she wanted to close a little early tonight and to go to the drive-thru and she would serve him.  So he drives the car around to the drive-thru window but some employee has purposely parked their car across the drive-thru lane so he can't get to the window to order!
At this point Hubs has a meltdown in the room, throws his keys, pocket change and hat down on the floor and has a hissy fit that any 4 year old would admire.
Picture that "Wire Hanger Scene" from the "Mommy Dearest" movie and Hubs as a balding Joan Crawford ranting about donuts.......

I don't 'get' these made up Holidays......Valentine's Day, Mother's Day, Fourth of July, etc.?
I could care less about them.
But Hubs, dear Hubs feels that he should be adored and pampered on Father's Day.  He's the same way about HIS Birthday but I digress....

The problem is that since I don't care about these faux Holidays, I don't tend to make a fuss.
Because of camp, usually Father's Day is spent driving to camp, all day.  And Hubs does most if not all of the driving.....well, because he is the Man and that's the man's 'thing'. ;-)  So he doesnt' get to do what he wants to do on 'his' day.
Add in that the kids don't do anything special for him unless I am standing over them the week before nagging them about what Sunday is.  And this year the oldest two were both already at camp during the week leading up to Father's Day, so they forgot completely until I made a comment to them.
That's how I guilted them into letting me take a picture of them with their dad.
Ooops.

I guess my letting him pick out the restaurant to eat at and not complaining about his choice, giving him a back rub and soothing his ego most of the day still didn't keep him from melting down when he was denied his donuts and coffee.
Sometimes I think I still live with a 4 year old in an old man's body.
*Sigh*

He got over it by the next morning when he got a nice hot breakfast with coffee at the motel before we left for home.

So I am behind on posts and emails this week.  My ISP decided to migrate my mailbox or something while I was away so I came home to a computer that had to download a few THOUSAND duplicate emails into my email program.  Thanks alot PennTeleData!

So what's on deck for your week?
I am child-free for the next 2 weeks....woohoo!

Email ThisBlogThis!Share to TwitterShare to FacebookShare to Pinterest
Labels: my weekend, no kids at home for 2 weeks, summer camp, taking son to camp