The Great Moving Adventure.....Well Maybe Not So Great? Day One

So when last we saw our intrepid travelers they were packing up their lives and stowing it in a POD and the overflow into 1.5 storage units.  FYI-those PODS don't hold as much as they say/you think.  And doing all this on very little sleep in the span of two days after sleeping on air mattresses or aa mattress on the floor before stuffing two cars full of more crap and two dogs.

On Monday they headed out but not at the butt crack of dawn(after carrying the single mattress into the POD and shoving the air mattress into the trunk of one of the cars).  The plan was to leave at 9ish am but when Sluggy went to start her car it was dead.  So they wanted on the towing place to send a guy to jump the battery.  In reality they left the house at 11am along with a $55 bill they weren't expecting. rah.

Making stops for food was tricky since they had two dogs(one in each car).  They had to time food procurement with rest areas so the dogs could potty and/or eat too with their humans as dogs can't be left in a car while they dined in style inside a restaurant(fast food or dive).  This took a lot of planning timing it all. 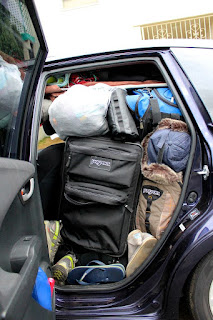 Not my car but you get the gist of what it all was like.

They stopped for gas outside of Hershey PA and then hit a rest stop with an enclosed dog park for the pooches.  Dog Parks with trucks whizzing by are not conducive to doggies doing their business is all I'm going to say.  They then stopped outside of Harrisonburg VA for gas and Subway late lunch/dinner.  The subs were carried to the next rest stop along I-81.  They ate and fed and potty-ed the pups and then continued on their way.  The driving alone, without stops, to the motel in Marion VA was 7.5 hours long.  Having left so late due to Sluggy's car issue meant they got in after dark which was not optimal as your slug doesn't see well driving in the dark anymore.  Plus slug had to drive the lead car in the little convoy.   Slug noticed once at the motel that her cell phone was down to 5% charge.  For some reason though the phone was plugged into her car, it wasn't recharging.  This became a worry they didn't need.

Finally got into the motel around 10pm, brought in what was needed for the night for the weary travelers and the dogs and hit the beds for some shut eye.  Slugs' eyes closed before her head hit the pillow.

Email ThisBlogThis!Share to TwitterShare to FacebookShare to Pinterest
Labels: day one, moving adventure, shit happens when you move, traveling by car to Louisiana