#2 Son passed his Driver's road test on Saturday!
And there was much rejoicing through the land..... 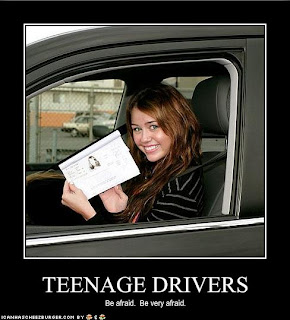 But it's good to have all of them FINISHED with the trials of learning to drive.  At least Hubs is glad that part of parenting is finished with for him.  Yes, he taught all of them to drive.  I volunteered to do it but after Daughter ran into the front of the CVS that time, for some reason nobody wants me to teach them anymore.  Good thing, because I don't think my nerves could have taken it. lol

More money going out to the big car insurance company.
The trade off is no more having to chauffeur the kids around to lessons, jobs, practices and friends houses.
Yes....yes, I can live with that! ;-)

And we are the evil parents who do NOT buy new cars for the kids when they get their licenses.
From what my kids have always told me, we are the ONLY people on the planet who don't reward their kids thus.  ALL their friends' parents buy them new cars.
Right.
Who would do that?......give an expensive machine to a 16 year old without a fully developed brain?
Please tell me that I am not the only one who thinks that this would be a silly idea.

But then again, I keep thinking back to that first case in the 1980's where a Long Island teen killed his father because he made the son drive one of their old cars to school and not the new car.
We hear about one or two of these situations every year now, along with teens killing their parents over not letting them do other things, like date some one or throw a party, etc.
Obviously these kids haven't been raised right to begin with and in order to keep the peace(such that it is)it's easier to just give in and pray the kid leaves home as soon as they turn 18.

I find it disheartening and sad though, what our culture and peer pressure, if given full reign over the parental authority, can turn our young people into.

At any rate the car deal here is thus......
We, the parents do NOT buy you a car just because you get your license.  We have a 3rd car you can drive but you have to work out scheduling with your sibling, who is also driving that car.   We pay for the insurance and maintenance.  You pay for the gas, unless you are driving to school, then we pay that part of the gas expense.
#2 Son has grumbled a bit but he knows he has it better than some.  One of his friends is not allowed(per his parents)to get his license until he can pay his share of the car insurance.  This is in addition to any gas he uses.
Finding this out gives me a little leverage.....I can always threaten to make him pay for his share of the insurance should his grades take a nosedive due to all the joyriding he'll want to be doing now. ;-)

So tell me, if money were no object, would you give your newly minted teenage driver a new vehicle?
What about the other costs of a car?......would you as the parent pick up the costs of registration, gasoline, insurance and maintenance too?
Would you have any conditions attached to the car and it's use?

Email ThisBlogThis!Share to TwitterShare to FacebookShare to Pinterest
Labels: don't buy new cars for teens, my kid got his drivers license, teenage drivers