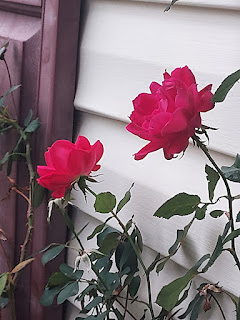 Still blooming into Winter.  This is going to take getting use to. ;-)
Here is the list of everything that I needed to get done in November and how it all panned out.........
*  Pay Bills--DONE  Everything got paid.
*  Move Into House--DONE  We moved into the house, emptied the POD, emptied the U-Haul Truck mostly into the garage and we've been slowly going through all the boxes/tubs in the garage.  We are far from finished going through it all.
*  Clean and Organize stuff in House--Working on it.  This is going to take months.
*  Buy Stuff for House--Working on it.  So far we've bought shelving units, a bed, replacement parts for the ginormous fridge, curtain rods, a night stand,  2 chairs for the kitchen island,
*  Close on PA House--DONE.  While the people who bought the house had aid they wanted to close before Thanksgiving, they left town for the holiday so that didn't happen.  The closing happened on Nov 29th and our check got overnighted the next day.  So glad to have that headache off our hands!
*  Clean out Inserts/Coupon Envie--DONE  I small chore I get done every month, sometimes twice in a month.
*  Editing More Photos--Working on it.  I haven't taken many photos since we got back from the beach so not much to edit.
*  Post about Old Trips--FAIL  Nope, didn't work on any of those posts.  Been busy moving and putting the house in order.
*  Work on Genealogy--FAIL  Haven't felt like working on this, see above.
*  Change All Addresses/Contact Info--DONE except for SwagBucks.  SB is being an asshat about changing my email addy so I can't cash any of my $$ out of that account.  I'll have to phone them after the trip.
*  Celebrate Thanksgiving--DONE  We actually had two Turkey Day celebrations.
*  Change Driver's Licenses--DONE  Went to a rural town North of here as they had appointments available sooner.
*  Register Cars in LA--DONE  After we got the driver's licenses changed, Hubs took the paperwork into the OMV and got the cars registered here and inspected too.
*  Get new Auto Insurance--DONE  We renewed our old insurance but in LA as we were in the midst of changing licenses and car registration.  After the new year we'll look into changing companies perhaps.
*  Set Up New Bank Acount in LA--DONE  This has been a royal pain to get done.  Seems none of the banks or credit unions down here would take our money until we had LA driver's licenses and at least 2 bills addressed to us at this address which meant we had to be here long enough to generate bills. lolz  None of the local banks have national or even widespread regional presence(mostly state banks).  Then we realized one of the banks I had money in that I dealt with only online has actual branches here(at least 4 in the area)so instead of setting up yet another bank account we'll get checks for the until-now online bank and use it as our primary bank.
*  Pack for Cruise--DONE  And we are outta here!  See y'all later! 8-)))
Sluggy
Posted by slugmama at 10:34 AM

Email ThisBlogThis!Share to TwitterShare to FacebookShare to Pinterest
Labels: doing things, to-do list, what got done in November